Spirit of the North claims to be a journey of discovery and enlightenment, but will it cunningly outfox everyone, or is it barking up the wrong tree?

In a culture of complicated games, with hours of gameplay and meta-level puzzles, super minimal games never really get much coverage and even less praise against its rival games, unless it nails several key pillars of gaming and offers something that really distinguishes itself from the pack. Spirit of the North is an incredibly simplistic adventure in a similar vein to Rime of Journey, positing a simple, ordinary, common or garden red fox as the main proponent, driving a Nordic folklore laden tale of exploration and intrigue. Infuse Studio was formed in 2015 and contains just 3 members who juggle design, music, and various Unreal Engine 4 based techniques required to produce stunning works of evocative art. 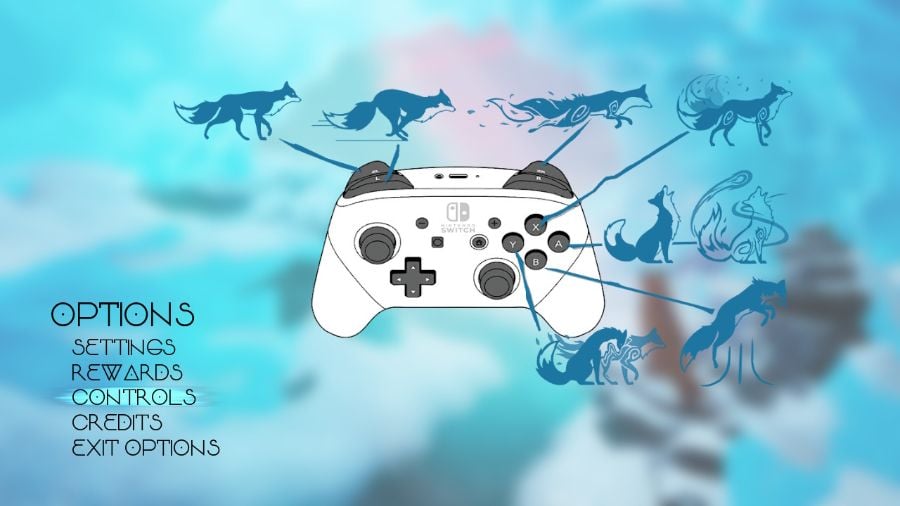 You begin in a vast snow-laden tundra, with a sense of awe that lets you feel like you could walk anywhere in this environment, sniff out things in the far reaches, and leisurely advance around the landscapes with such a sense of wonder that absolutely anything could be around the next turn for you to discover. Using the left stick you push forward and your beast lurches into action. Holding L gives you a boost of speed, dashing through the snow twice as fast as your standard amble and the R button lets you jump, so you can bound around the environments reaching higher places and leaping over obstacles. The A button lets you yap and bark, which becomes increasingly useful in further chapters to communicate with allied spirits, and finally, the X button interacts with totems and anything else that is usable.

The gameplay is slow but steady as you navigate what seems to be open worlds in a largely linear fashion. You simply follow the mounds of stones, trekking across miles and miles of scenery with your thumb firmly pushing that analogue stick upwards. Honestly, the first 10-15 minutes of the game will see you lolloping for an obscene amount of time before you get to the next section you need to endure. It's quite monotonous, until you find an interesting building, or discover a decaying monk. Once you have located something interesting, it's mere seconds to figure out what to do and how to complete it. For the majority of the time, it's a flower or rune to activate and there are a series of mummified shamans that have lost their magical sceptres and you simply have to appease them by returning it back to them. Generally, the puzzles in this game are not very taxing, which unfortunately just makes it all the more uninteresting to play. Split across eight chapters, there are 28 shamans to find, fifty spirit blooms, eight ancient murals, 12 sets of runes to match up and a bunch of plague tethers to destroy giving you roughly four hours of content to 100% complete if you are a seasoned gamer.

Much of the gameplay centres on exploration to find ways to progress further. These involve a lot of platforming, simplified maze-style wandering to find the next mound of stones, and flying down the slopes at the speed of sound to get yourself further into the levels. Interestingly, sections where you are bounding downhill almost turn into a snowboarding style mini-game as your animal hurtles down the hills, slipping, sliding and skating across the icy blue surfaces. You can jump and steer left and right to follow the line of the tunnels and chasms, however, the animation in this sequence again is amazingly stiff and clunky with your Vulpes Vulpes assuming a stooped posture, tail jolting, as if it's about to drop the most girthy, dehydrated scat of its life. 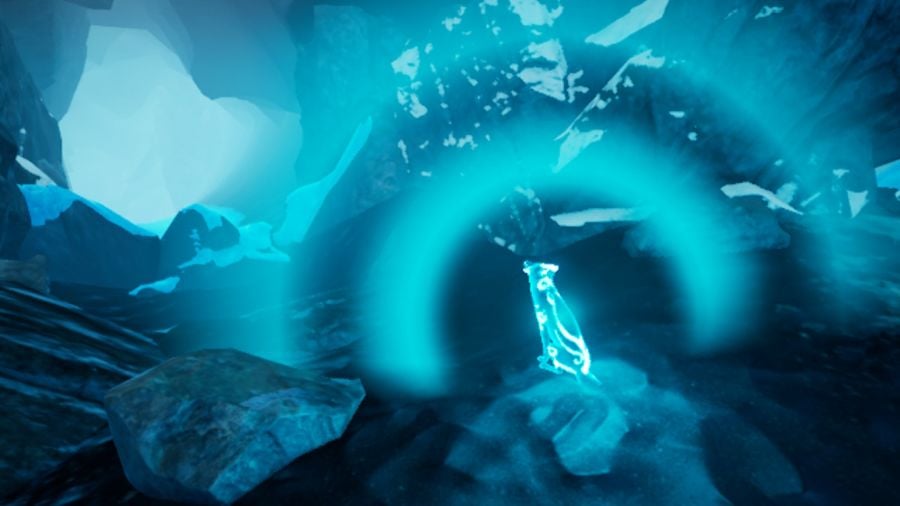 Graphically, you will, at first, be quite impressed with the atmospheric and vast environments. This quickly dissipates when you look closer into the details. First and foremost, the scenery is awesome. It sets the scene and paints the colour palette you would expect with some blues, greens, and whites, the snow looks bump-mapped along with the shiny stonework and cavern walls, with reflective water pooling in places, and your glowing character illuminating the caverns and nooks. When you look up close though, you see probably the worst rendition of fur I have ever seen in a game on your fox. It’s impressionistic at best, but downright jagged looking at worst. The snow effects underfoot are also glaringly awful. You step foot on the crisp white surface hoping to leave prints or a trail, instead, you are met with one frame pop-in of "animation,” bevelling out where your fox has touched in the virgin snow—its horrid. Water particles where you have waterfalls or sprays of water, and surface ripples and splashes disappointingly look like original PlayStation graphics. Hideously clunky textures flatly pressed onto the surface mesh, looking pixelated and unsubtle, really lets the game down.

On the plus side, there are some nice touches, such as the fox’s in-game animation with a decently realistic portrayal of animal locomotion. You obviously have a tail that bounces, paws that canter, and if you emerge from any water you are wet so you "shake it off,” however, the latter in particular is highly repetitive and becomes annoying in sections where you have to dip in and out of the water, meaning you are slowed by these automated animations every few seconds. The second chapter, in particular, juxtaposes a nicely observed animation of a fox hobbling around with a poorly foot, with miles of walking at a snail's pace. I get it; it's artistic and beautiful, but at the same time it becomes increasingly dull and grinds the already minimalistic slow pacing down to a halt which is annoyingly jarring. Another nice touch is that while following your wisp if you press A to bark, the wisp replies to you. It's a lovely moment of synergy and unity, letting you know that you aren't alone in this adventure.

The design aesthetic, beyond the realistic backdrops, is quite neo-tribal, combining ancient glyphs with neon lighting in a similar way that Breath of the Wild’s Guardian Enemy is presented as ancient technology reawakened by a benign spiritual force, and forebodingly ominous. I quite enjoyed the art direction for the ancient murals, they tell a story visually and fit the zero-spoken-word characterization of the game. There is quite literally nothing to read, nothing to hear, just the dulcet piano music tinkling in the periphery and the items to tick off. Throughout there are also five additional skins to discover for your beast, each one giving a different look, such as pure black, black with red accents, white with red accents, grey, and the neon tribal patterns fusion of yourself and your wisp. I quite enjoyed the collect-a-thon element of the game, though everything is just too drawn out and sparse for my liking. 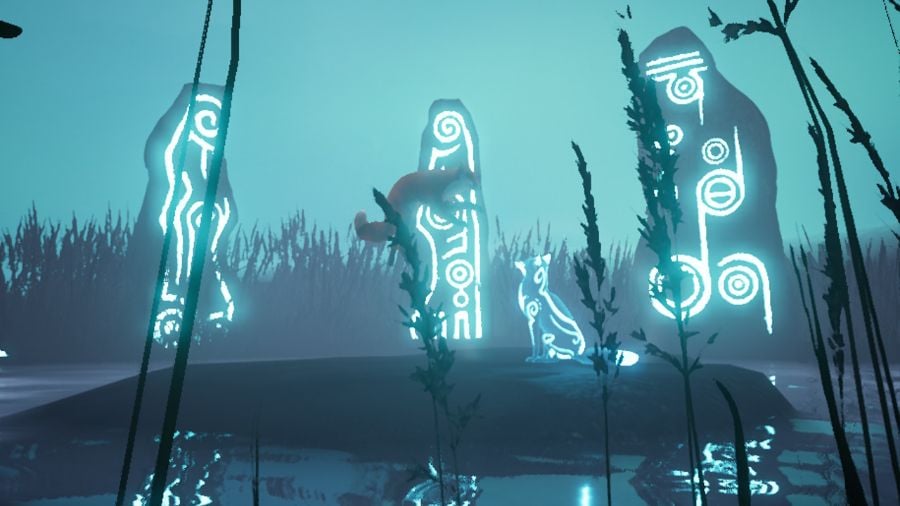 Spirit of the North certainly looks fresh, inviting, and most of all easy to pick up and play by anyone of any age or ability, but if we peel the layers back what we discovery at its digital heart is a massively underwhelming effort in terms of mechanics and graphical polish. It has its moments, and it has a stream of collectables and unlockable "abilities" but all of which feels like a chore to grind through. The combination of the slow pacing, lack of real narrative, and monotonous trudging really didn't inspire me to want to play this any more than I had to (and I'm a completionist!). As a multiformat gamer, I would say it probably looks prettier on other consoles, and it's cheaper to obtain on PS4 or Steam at around £10-2 currently as opposed to £15.99 on eShop.