Single player
Local Multiplayer
Online Multiplayer
Co-operative
The alien slaying tower defense game has found new life on the Nintendo Switch! How does the fast paced action hold up on the go? Let’s take a look!

Spacejacked is a hybrid of an action shooter and tower defense game, with heavy retro and arcade influence. Beginning as a flash game before being chosen for distribution on Steam Greenlight, it was eventually ported to the PlayStation 4 in 2018, and now the Xbox One and Nintendo Switch. Being a big fan of all things sci-fi and retro, I was immediately attracted to the combination of the two that Spacejacked had to offer, and what I found upon receiving it was a fast paced, entertaining ride that hooks you instantly as it plunges you directly into the action. 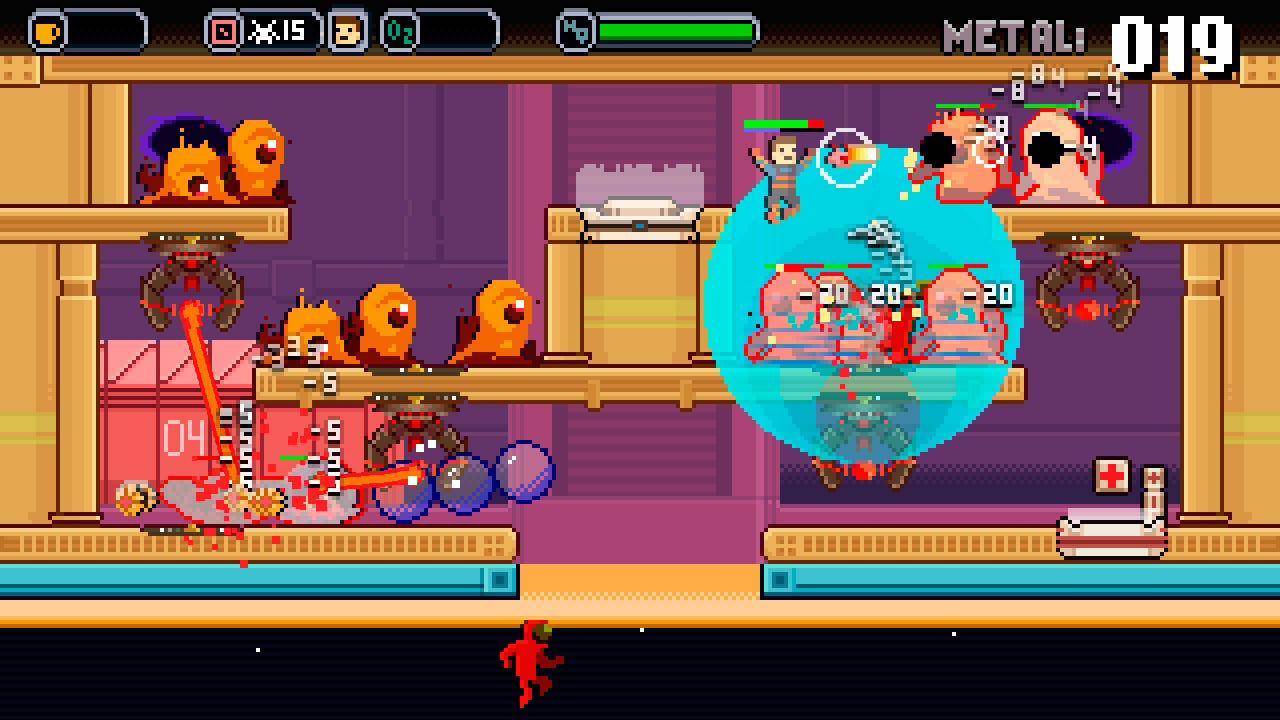 In typical tower defense fashion, gameplay has you setting up different kinds of defense mechanisms to stop oncoming swarms of enemies from reaching a specific point. In Spacejacked’s case, you set up three different kinds of defense turrets inside the three rooms of your spaceship, each with their own command console that needs to be defended. You then have to swap between the rooms, making sure to keep your weapons upgraded and your console repaired amidst the alien attacks. The action shooter aspect comes into play through your blaster, which you can use to shoot aliens along with your turrets to speed up the defense. As you progress through the levels, stronger and stronger aliens are introduced, forcing you to update your turrets and strategy regularly. You do this through metal, which you can collect from defeated enemies. Creating a new turret, upgrading it, and repairing your damaged console all costs metal, so resource management is a huge factor. You do have the option to sell a turret for every bit of metal you’ve spent on it, though, so the game doesn’t punish you for experimenting. Managing three rooms at once can be a bit daunting, but the fast paced action keeps the game fun at all times. If you die, you simply restart and try again, which can be annoying but also isn’t too punishing. The game balances difficulty and entertainment value beautifully.

Spacejacked has three modes for you to play: story, challenge, and endless. In story mode, you play as Dave. Dave is the lone engineer tasked with protecting the ship from alien threats. Along the way, your fellow shipmates are captured by aliens and must be saved. Progress is tracked in days, and the ultimate objective is to survive in space while protecting yourselves from alien attacks. Story mode has two different options in itself: a slower paced, "planner mode" that gives you more prep time between waves of aliens, and the “original badass mode” where you get prep time before the day’s first wave starts, and you have to make adjustments on the go. The second option is how the developers advertise the game is meant to be played, and is how all other game modes operate. As mentioned above, even in this faster paced setting, the game is never punishing in its difficulty, and it gives you as many chances as you need to find the right strategy to beat the waves of aliens. There’s other extra features too, such as the ability to harvest metal from open space through a Darius inspired minigame, change the function of your turrets, and upgrade your blaster. The story is short, taking on average about two hours to complete depending on your strategy and ability to think quickly on your feet. It’s not long, but it’s fun from start to finish. 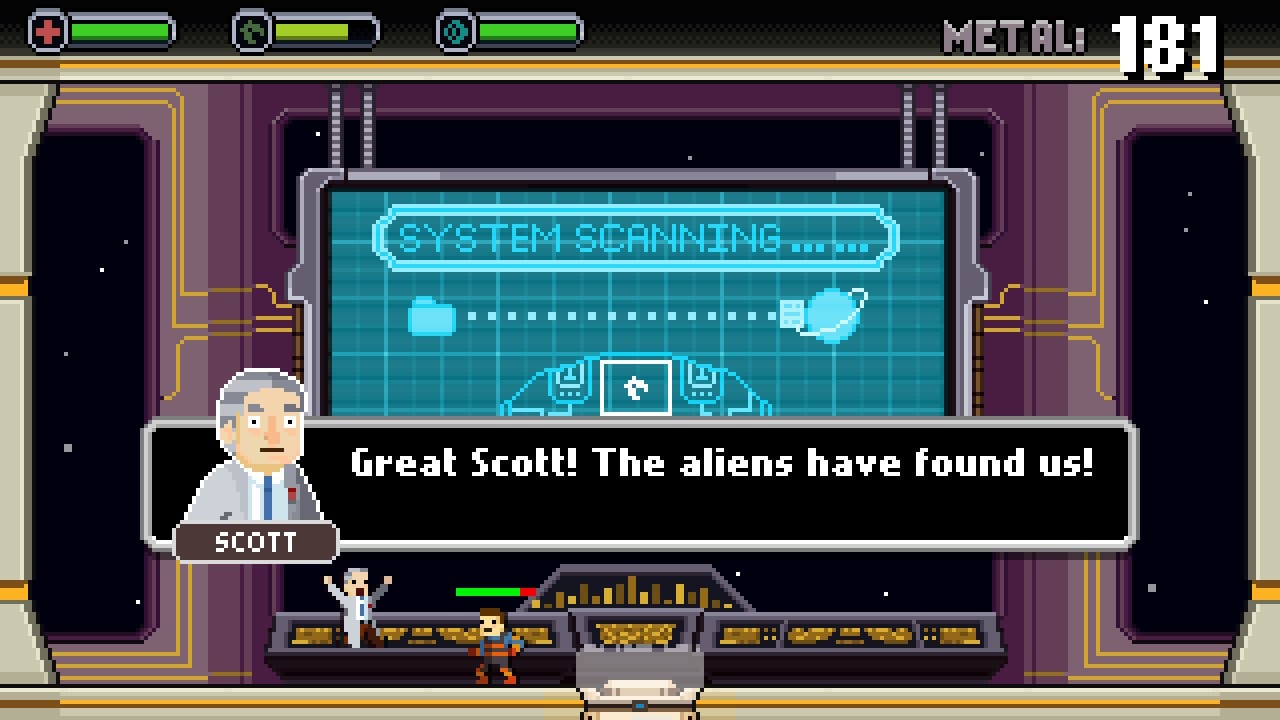 Challenge mode unlocks as you make your way through the story, and gives you different challenges to complete such as finishing a challenge without using your blaster, or defeating a wave full of just one specific type of enemy. Each challenge gives you a grade between one and three stars. Your grade primarily depends on how much damage your core console takes during the challenge. It’s a mode that keeps things fresh by forcing you to change up your strategy, which is a big selling point when it comes to replay value in my mind.

Finally, endless mode is exactly what the name implies: endless. There’s two seperate maps for you to set up your defenses, try to keep the ship’s center core console from getting destroyed, and survive as long as you can against the alien onslaught. You fight for a high score, and each map has their own local and global leaderboard. You can even compare your high scores just against other friends who have the game. This is, in my mind, the game’s most challenging mode and the one that kept me coming back for more. The action and combat really takes a step up here, as you’re quickly overwhelmed between the oncoming forces, managing your turrets, and trying to keep the center console safe and repaired. The arcade influence is obvious throughout the entire game, but endless mode is where it’s most apparent with its focus on high scores, leaderboards, and just surviving as long as you can.

The graphics and sound are a big part of where the retro influence comes to light. The in-game graphics are 8-bit, with some fantastic colors and level design. The characters all look great in a simple, almost minimalist way, and this is highlighted by the speech bubbles with which the characters talk, where pixel art portraits give a more detailed, personalized look for each character. The sound is also 8-bit, from the music playing in the background of levels to the sound effects of your blaster and turrets. One complaint I do have here, though, is that the music that plays during levels in all three modes is very repetitive. They’re good songs, and they fit the tone and visual aesthetic well, but I just got a bit bored of hearing them by the time I was finished with the game. 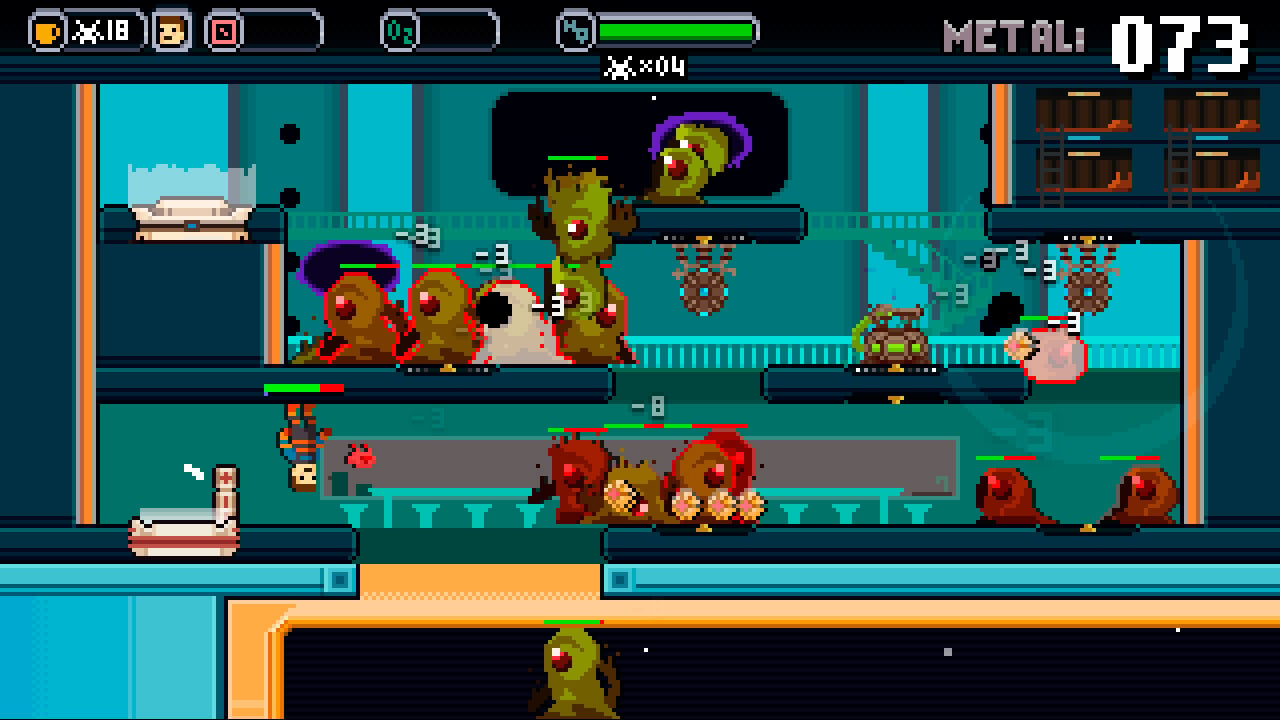 What We Liked ...
What We Didn't Like ...
9
Gameplay
The fast paced mix of action shooter and tower defense keeps you both entertained and occupied for the entirety of the game. There's hardly a dull moment during gameplay.
8
Presentation
The 8-bit graphics and sound give a delightfully retro feel that make this feel right at home in an arcade-style game.
7
Lasting Appeal
A short story mode, variety of challenges, and two endless modes give plenty of reasons to play the game for hours to come.
8
out of 10

All told, Spacejacked is a really fun game that comes in a really neat package. The gameplay is fluid, quick, and engaging while the graphics and sound, while not perfect, are charming. This is a game that I can easily recommend to anyone who enjoys arcade-style games, tower defense, and action shooters.
Reactions: CactusMan and Ericzander
Share:
Facebook Twitter Reddit Pinterest Tumblr WhatsApp Email Share Link
Tower defence elements? Nice to see that back again. I was not particularly fond of most of the first wave (or at least it failed to click as well as roguelike elements) but always wanted it to and this looks like it might go another way.

Also whole review with a game like this and no