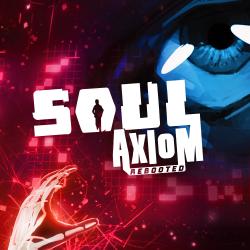 Big fan. Big. Fan... of Portal.
First-person puzzlers are becoming increasingly popular. Is Soul Axiom Rebooted worth your time on the Switch?

Imagine backing up your soul, living forever, and experiencing anything you could possibly conceive. Imagine the turmoil of your soul becoming entangled with other souls. Welcome to Elysia, where the edges of fantasy and reality blur and you have to figure your way out of this whole afterlife perpetuating scenario. Originally enduring a rocky stint in early access, Soul Axiom was released by Wales Interactive for Xbox One, PS4, Windows, Mac, Linux and Wii U back in 2016. The first thing that struck me about this game was just how utterly fantastic it looks on the Switch, with this iteration being the rebooted variant: an improved, polished, and less muddy edition that promises to include extended localisation, an objective system, improved narrative and overall more order to the story as it unfolds. As described on WI's site, "Soul Axiom is a first-person story-driven adventure puzzle game, set in the beautiful, haunting cyber-world of Elysia. Collect unique hand powers, discover multiple endings and choose your own destiny as you unravel the mystery of your digital afterlife.” The main protagonist is a nameless, faceless soul who has to navigate a seemingly neverending stream of intricate and intriguing environments. Along the way, you collect PEMOs, in the form of cymbal-smashing stuffed monkey toys, that offer tantalizing and cryptic clues to your history, character, the ill-fated Soul-sync servers and the purpose of Project Persephone.

Without giving too much away in this review, I want to clarify that I legitimately saw this game through from start to finish, and even submitted a few choice bug reports to Wales Interactive to strengthen the imminent release on Nintendo's latest home console. I put a heck of a long time into solving everything I could, interpreting every detail and coming to terms with how each environment relates to each part of the twisting and unfolding storyline. I really do not want to spoil anything for those who don't know anything about this game, so I will attempt to describe, as best I can, the adventurous elements of the mystery, the incredible level of detail given to the environments, and the slight missteps this game makes in providing a fully rounded interactive experience, but without divulging anything too critical to maintaining the mystique. It's tough to describe without giving away specifics, but I will try. 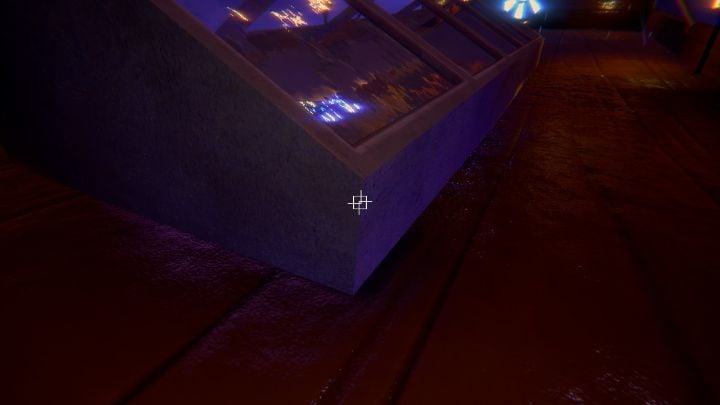 Set across 40 lovingly crafted and incredibly varied environments, you begin the tale by falling listlessly into Elysia, which is effectively a playground for your soul to roam. You land on the deck of a galleon where you are treated to a plethora of clever sound and lighting effects, producing an extremely atmospheric space for you to begin the exploration of your digital afterlife. The rain is bouncing off the deck, drizzling past your face and crawling down the wooden walls, reflecting neon lighting and the ambient effect, such as clouds ominously lighting up, full of electricity, while bolts of lightning punctuate your periphery. You take a look around, get to grips with the typical FPS control scheme, which pleasingly feels very intuitive, and head inside to find your first tutorial-style section with the basic parkour of ducking, jumping and interacting, to navigate the environment and further grasp the buttons and layout.

Through your voyage of discovery, you collect a series of powers for your hands, imbuing you with a select range of abilities that curtail your adventure and narrow your options as to how the proceeding puzzles can be tackled. The first ability you absorb allows you to manipulate solid matter, phasing it in and out of existence at will. Your hands glow blue and surge with electricity, your right hand in a permanent state of X-ray. You can use this hand-power to digitally remove objects blocking your path and access hidden areas, or you can re-instate objects that have already been digitally obliterated. You can also use it to light your way in darkened areas. The second power you attain is that of time control. Equipping this hand-power causes a Matrix-esque green filter to permeate the screen, the edges of interactable objects glowing verdant, giving you the ability to play, pause and rewind the position and location of items that are held in stasis. This power is one of the most used in the game, and one of the most satisfying to harness thanks to the sheer range of scale to the items you can affect, from doors and cannonballs to monumental structures. The third is a fire-elemental type blaster power which can be used in two ways. Firstly, single shots can be emitted by hammering the ZR button, while holding the ZL button will produce a more devastating charged blast. The latter is ideal for smashing through metal objects and clearing wooden debris that obstructs your path. The final, and possibly the most critical, is a corruptive type of energy. This absorb-n-blast laser can only be harnessed and directed when a purple energy beam is present onscreen, meaning that you can only utilise it in certain scenarios so bear in mind where you have been and what you could possibly apply this type of power towards. 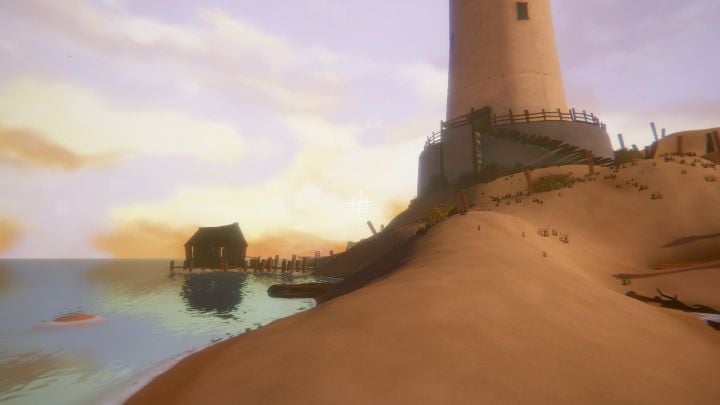 All these powers sound fantastic on paper, but in reality, the powers have an undeniable flaw: they're massively underutilised in their ability to do the thing they're meant to do. The game itself is a large, sandbox-style open world, full of elaborate environments and devious details, but unfortunately, the fact that the way they can be used is not so ambiguous means that they are massively under-utilised. For example, you come to a room with an object in pieces, it's clear you have to use the green powers on them to move them as they're glowing green. So you do, but in an unsatisfying chore-driven series of actions, you don't get to freely use whatever power you want on those objects. I didn't notice a puzzle where you had to identify an object, phase it into existence, move it through time, and then power it up with a blast. You also cannot use the blaster to smash any old piece of wood or metal, only predetermined items. There is little freedom to do anything too elaborate, which could be a deliberate ploy to retain focus on task-inclusive items, but it feels like you have these incredible powers to play with but are heavily restricted from experimentation and fun. Though each interactable item only does one thing with one power, the developers have, in places, combined mini-puzzles to utilise each power on different areas of interest. An example of this is phasing out a wall to then move an object through that space, re-phasing the wall back into place, climbing said item to a place where you can then use the charged blaster to smash something at the top of a previously unreachable area.

The puzzles you encounter range from tiny, single-room puzzles on a desk to puzzles that span an entire outdoor environment and multiple buildings and objects. To give you some guidance, you will find diagrams, maps, and equations that can be used to further your exploration should you get baffled into oblivion. More often than not, the puzzles are very easily solvable using logic and memory. While this does invariably make you feel a level of accomplishment, it tends to feel like a tick-box exercise in most situations. Very few of the puzzles came across as taxing for myself, in all honesty. I got stuck on perhaps three puzzles. One particular hurdle I met was a Mayan-themed slide puzzle, and I absolutely hate slide puzzles for their sheer back-and-forth-style trial and error time wasting nature. Once I had tried every option, I was able to solve it within five or so minutes rather than the less than one to two minutes I had grown accustomed to. It's worth noting that there are so many conundrums to crack, places to search, and items to discover that the developers should really be commended for keeping it fresh at every turn. The only issue is that the pacing of the game seems to spread everything out so there is no haste to any of it, and it never breaks your stride to anything more than a haunting trudge. One area in a later level sees you race against time to get out of a flooding plane, however, that high-pressure section is completed far too quickly and you're back to wandering around a large area with no urgency behind your actions. It's slightly disappointing as the environments themselves are absolutely incredible. There's ultra-realistic house interiors, with a grounded and believable atmosphere; futuristic, Tron-inspired, Superhot-looking meadows of undulating, levitating geometry built from neon lighting and metallic textures; and mystical, well-designed ice palaces with action-critical puzzles that would fit entirely in the Zelda universe. The variety and abundance of props, items, and subtle nods to other games and movies are awe-inspiring. The majority of the backdrops have small nuances that reflect the developer's playful and imaginative creativity, which is superb. One environment even takes more than a few ideas from the Alien films, pays a truly heartwarming homage to the maze-like suffocating techno-industrial atmosphere, the lighting style, and thematic accoutrements, and as a Xenomorph fan, I loved every second of it. Another standout area is that of Flat 23, where you have to investigate the environment in an escape room-style mission to figure everything out, what's going on, where is my objective, which walls conceal secrets and what year is this?! Honestly, this locale is fitted out superbly, tasks are scattered evenly around the entirety, and I thoroughly enjoyed that sequence of mysteries from start to finish. 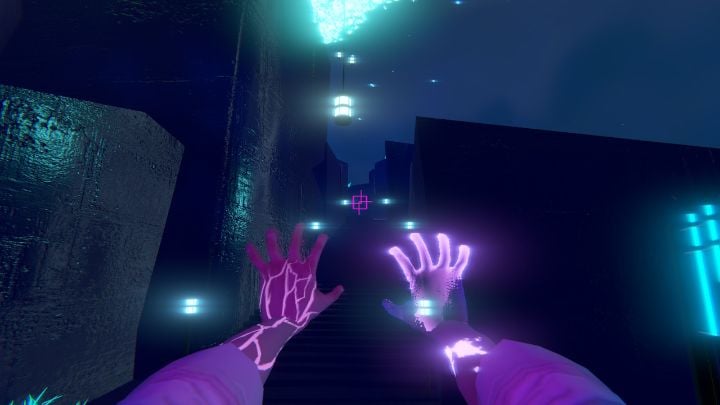 Soul Axiom wants to be cerebral, visceral and engaging and it succeeds to a certain extent, but in other ways, it feels drawn out and sparse. The scope of what has been created here is majestic, but perhaps the ease of puzzles could be tweaked, modified to incorporate more combinations of powers, allow for more user creativity, and quicken the overall pacing to make it a more satisfying experience. The mystery that is woven throughout is compelling and engaging, however, again it feels like it takes too long to get to the conclusion, and though a long game should guarantee hours of fun, Soul Axiom somehow feels like it has been elongated to make the game take longer to complete than it reasonably should. While I personally did appreciate the vast amount of assets, puzzles and expansive places to explore, I could see how some players would view this game as a sterile stroll through a relatively repetitive game. With a total of three endings, hidden corrupted levels and going back to use new powers on old environments yielding even more to explore, I personally got a lot of enjoyment out of this title. It's no Portal beater, but it really does a lot of things right in building a fascinating and assorted world full of brain-teasers that should definitely be expanded upon in future. The overall pace of the game could be improved by simply adding some sort of global timed element perhaps, maybe you're corrupting into nothing and have to race against time to rebuild yourself at certain checkpoints to prevent total termination of your soul. Having spoken to WI via email I think they are more than capable of taking critique on board and elevating this title above its middling reviews for the non-rebooted version. This updated cyber-thriller has definite improvements over the original, according to the update notes that were inspired by previous critiques. I would absolutely recommend investing your time into it, especially if you're an FPS puzzler aficionado, as it's only going to be a $13 title and it can be played entirely on the go now, thanks to the Switch's portable nature!