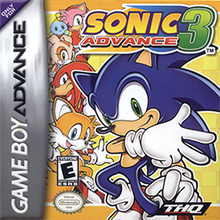 I strongly recommend reading my Sonic Advance review before this, for continuity’s sake and all. And the Advance 2 review has been cancelled. Fuck that game. Anyways, on with the review. Reviewed on Lakka for the Raspberry Pi 4.
Sonic Advance 3 is the third entry in the critically acclaimed Sonic Advance trilogy. Nintendojo gave the game a 93/100 (on Metacritic), stating “The value of this cartridge will keep you playing and playing until your fingers rub raw.”. IGN agreed, giving the game a 9/10, stating “The traditional Sonic adventures continue to shine on the Game Boy Advance in a tremendously fun sequel.”, and giving the game a label of amazing. Is Sonic Advance 3 really this good? Let’s take a look.

Similarly to its two predecessors, Sonic Advance 3 begins with a cutscene. The cutscene depicts Sonic and Tails running on some sudo-3d background, with text stating that Eggman has kidnapped Sonic’s friends (or something), and he’s using the Chaos Emeralds to build Eggmanland? Strangely, the manual depicts a completely different story than the game itself. The manual deptics Eggman using Chaos Control to split the world into 7 pieces, causing Sonic and friends to get the Chaos Emeralds to restore the world to it’s original state. Both stories are serviceable, but I don’t understand why the game and manual show different stories. Luckily, the game’s plot has little to now importance to the rest of the franchise.

On general mechanics, it is a nice evolution on the previous games. Normal movement is mostly the same as the previous 2D entries, but the player characters have faster acceleration. While it doesn’t feel as natural as the previous games, the game is designed around the controls perfectly, so I have no complaints. As I cancelled the Advance 2 review, I think talking about some of that game’s mechanics is in order. First of all, a new character, Cream the Rabbit, was introduced. Cream has Tails’ flight and the best attack in the game, that being her pet Chao, named Cheese. Haha, name pun. Cheese can wreck basically anything with the press of the B button. The more important addition from Advance 2 is the introduction of a mechanic that would later become very important in the series; boost mode. By running long enough, the player will start to run super fast, silhouettes follow behind the player, and pressing B as any character (In Advance 2, and every character except Cream) will allow the player to keep speed from earlier, which is extremely helpful. Collecting rings will also allow the player to break into boost mode earlier. Boost mode does an amazing job rewarding the player for keeping up their speed and collecting rings. One can also now press R after bouncing off a spring in conjunction with a direction on the D-Pad, allowing the player to do a trick which can shoot you upwards or carry momentum after a jump off a spring. These mechanics translate perfectly to Advance 3, well, mechanically anyway.

The biggest new mechanic comes in the ability to select a duo of characters. Basically, the player can now select two characters at one, which will change the character’s attacks and movement, sometimes drastic and sometimes not. Each combination also has its own action performed by holding R. While I won’t go into all of the combinations, as there’s 25 of them, I will say it adds a butt-fuck-ton of replay value, and is without a doubt one, or the, best asset of this game. I really cannot understate the importance of this mechanic, it really does add that much to the game.

Sadly, there are a few problems that hamper this system. First, while the order of unlocking characters and their placement are perfect, you have to have Sonic as your player character. This goes so far against the game’s emphasis on character variety. Because of that, the player has to go all the way back through the hub world you’re currently in, (and yes, this fucking game has hub worlds) find the giant ring, jump into it, and walk up to the character swich screen. This wouldn’t be so bad if it weren't for two different things. First, the hub worlds are way too fucking convoluted, and are often layed out in ways that force you to take your time, like forcing the player to wait for platforms, but we’ll burn that bridge later. Secondly, the game never tells the player how to unlock the characters, so you could potentially have to go back through each of the confounding mazes the game calls “hubs” to find the fucking act 3 stage portals. That’s not even getting into the lost Chao (oh yeah, there’s Chao in this game, we’ll talk about that later) in each level which are hidden in each level, and are often hidden behind character-specific areas.

Now, onto those aforementioned hub worlds. So, in order to get to each stage, you must find act rings in each hub world. To start with the positives, the game allows the player to play any act in the world whenever you want. There are also handy minigames that get progressively harder later in the adventure, which can be played to earn extra lives. With that said, these hub worlds are an intrusion on the normal game, and only serve as padded-out commutes between levels. The hub worlds in this game are textbook examples of the word “convoluted”. For some damn reason, the devs felt it was absolutely necessary to have the player do switch “puzzles”, or to force the player to use cannons to jump to new sections, which could have the player going in circles. While this doesn’t sound so bad, the hub worlds are constantly shitting on the game, and they have no reason to exist.

On the other side of the spectrum, the level design is fantastic. I first want to mention what seems to be the two most common criticisms of the level design; crusher segments and bottomless pits. The crusher segments are only really that common in Toy Kingdom and Ocean Base, and the game only lays out like 3, maybe 4, after each other. Bottomless pits also aren’t that common, and they are usually well telegraphed. The biggest problem with this game’s level design is the terrible design of the first stage, Route 99. While the aesthetics in the stage are perfect, the level design is just an unmemorable set of traps that the game just flings you into. Spikes that spring out of the ground are very common, and are super cheap. Luckily, the game picks up right after Route 99. While this might sound little, I know plenty of people who have just given up on Advance 3 because of the god-awful first impression. From what I’ve dug up, it seems that the level designers had little to no experience with the franchise beforehand, and it shows, with the game becoming better and better with each passing level, all ending in Chaos Angel, which is expertly designed in every single way, and serves as probably the best conclusion in the entire franchise. That might also be because of the absolutely godly aesthetics and music, which invokes Metroid of all things.

The stages are also filled with Chao, 10 per zone, which are found in stages and hub worlds. You can see your totals in the Chao room in the giant ring thingy by pressing Select. Collecting all 10 in a zone will summon a key that’s placed in a random place in a random stage in the zone. Collect the ring and you gain access to the Special Spring in the hub world, which is used to access the Special Stage of that zone. Fail the Special Stage and you have to go back and get another key. I personally think that there’s too many steps and they could’ve cut out the key part and it'd be better off for it. About the Special Stages themselves, well, they suck. Your on the end of the tornado while it’s being piloted by your partner. You must collect the set amount of rings by the respective “ring gate”. The depth perception sucks, some gimmicks aren’t properly taught to the player, and the act of unlocking them is convoluted. I don’t understand why the devs can’t just use the Sonic 3K/Mania Special Stage system. And, of course, no Super Sonic in normal stages. Getting all the Emeralds will unlock the final boss, which sees Sonic and Eggman flying in space and attacking one of Eggman’s robots which has gone rouge, Gemral, who’s built off of an arc set up in the spin-off Sonic Battle. After beating him, a cutscene will play, showing Tails fixing the robot and giving it over to Cream, as the credits roll with an amazing theme playing in the background. While those who’ve played Sonic Battle will probably appreciate this game building on that game’s character arc, but to others, it really won’t matter.

The visuals in this game are absolutely amazing, and are some of the best pixel art I’ve ever seen. I can’t really describe why in words with my lack of expertise, but everything in the game is immaculately constructed and beautifully animated. The soundtrack follows suit. Despite the GBA’s poor reputation soundwise, this game’s OST is fantastic. Again, I lack expertise, but I do guarantee that this game is a good listen. I especially appreciate how each act has its own rendition of the zone’s theme. I strongly recommend giving it a listen right now.
Verdict
Stealphie and alexander1970 like this.
Like this review