I love sniper games, can't wait to take one on the go!
Sniper Elite V2 Remastered is not the latest in the series, but at its initial release in 2012, it took the world by storm by introducing hyper-realistic super-gory-bullet-time. Never before has a game of this caliber been so portable, but how does it look feel and play?

Tactical Third Person Shooters are relatively few and far between on any console, so Rebellion's act of remastering one of my all-time favorite franchises seems like a smart decision. Updating an already-outstanding game and furthermore, bringing it to a modern portable console, is a mark of sheer genius. This iteration's unique selling points are: remastered visuals, new playable characters, a new frame-by-frame photo mode, and all available DLC, from the 2012 original, including several new weapons and the Landwehr Canal and St Pierre bonus missions. 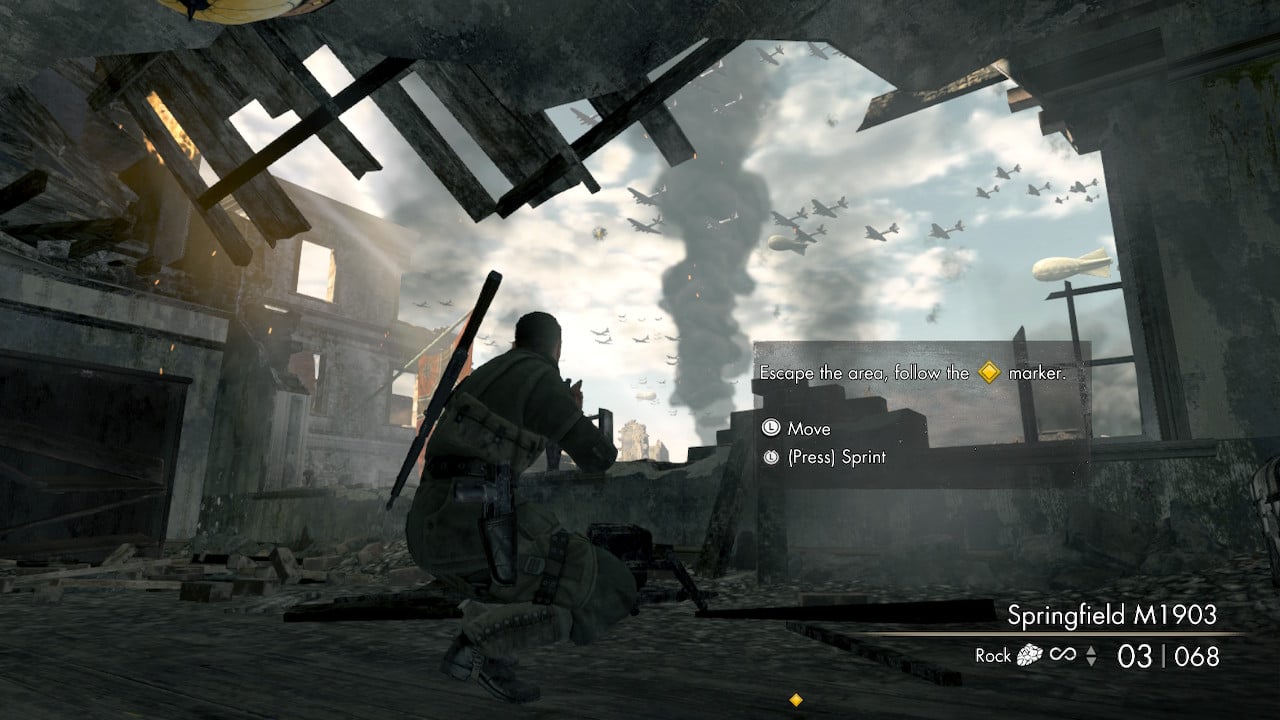 From the second you boot up this sharpshooting celebration of all things ballistic, you will find masses of options and modes to get your trigger finger itching. Including settings such as kill tally, challenge mode, in-game achievements, and both online and local coop/multiplayer, this game is a veritable feast of replayable fun, shaping the package into one irresistible purchase.

You begin with a tutorial-esqe mission to prevent any V2 rocket scientists being snaffled up by the encroaching Red Army as Hitler's war machine attempts to retreat back across Europe. Before and after each mission you are treated to footage, a narration, and the unwavering confidence that our protagonist, Karl Fairburne, exudes. It's utterly compelling and frighteningly realistic, as it's artistically based on the real events of World War II. I don't know if it's just me, but games that have you obliterating evil forces such as the Nazis really grounds things in a way I can really get on board with, and every ounce of me wants to see it through and battle tooth and nail until the end. It's like a universal evil, a common enemy that anyone can join in and fight against without thinking, and as a result the Sniper Elite and Zombie Army series have always had this grip on me in a way that similar alternatives such as Sniper Ghost Warrior series just cannot compete with. By the end of the first mission you hear Karl exclaim "Four to go", and get a feeling that you have a hell of a lot more to do and see. If you had invested in reconnaissance more, thoroughly examined each building and sought out enemy vantage points, you would have easily found those elusive glistening ingots that lay hidden, and you would have popped off those glass bottles mid-mission with some incredible pixel perfect accuracy under the cover of the masking sounds of war-time explosions in one sitting and maxed out your meta scores. But, if you went full Rambo and slugged it out to the end barely surviving each encounter due to clumsy, noisy, fumbling around, then you have a long way to go before truly mastering the game.

Almost immediately upon booting the game, I was aware of a granular clarity and resolution that wouldn't have been possible in 2012, and especially not in a handheld experience; it is truly a portable visual pleasure. The player model for a start is crisp and embossed with a new level of detailed. Environmentally, nothing is too small or too low level of detail to have to decipher, nothing un-scoped is glaringly "potato", but overall everything builds towards a selection of environments that are reminiscently familiar yet immaculately polished for this outing. The focal styling of the scope stands out, with a superb mixture of in focus objects or NPC's, and depth blurred backgrounds it focuses your attention and frames the action so well. The draw distance is notably impressive, however the character models turn into ghastly low-poly nightmare-fuel when viewed from afar via the binoculars. Enemies lose features such as faces and fingers, and it all looks like you have been transported back to playing this game on a Nintendo 64, which is something I feel could definitely have been improved, perhaps by using better optimized culling and a more adaptive level of detail (LOD) when viewing models up close while zooming. 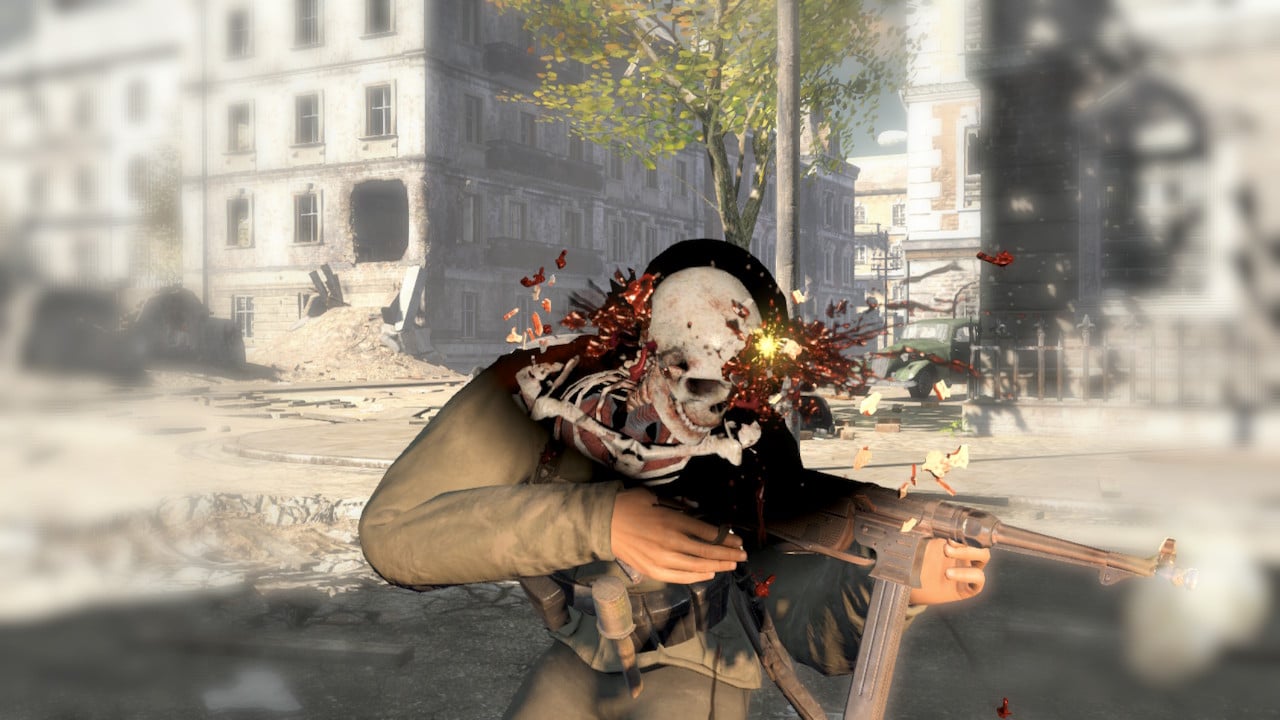 At some points in this game you feel pinned down: no hope, no room to maneuver, and next to no chance of survival if you shoot from the hip with a scoped weapon. Remembering you have a variety box of assorted armaments at your disposal in your arsenal really opens the game up into a more organic situational affair. Failing to prepare is preparing to fail, and such is overtly true in Sniper Elite V2, with the tactical placement of trip wires and ground mines crucial in making your life easier in comparison to longer more drawn out battles. That's not to say the longer battles aren't as nail biting and action packed, but a gung-ho approach will not extend your lifespan. Going into the evening-themed Mittelwerk Facility mission, I quickly realized the value of binocular recon and placing your shots to make them count, an unbelievable number of Nazis spewing from the woodwork as they were alerted of my presence. I was surrounded and vastly outnumbered, but taking my time and grinding away at the odd grunt here and there gradually got me into a situation where I could regain my stealth and start properly using the ability to create diversions, systematically taking them down quickly and quietly without sustaining injury. It felt like I had dug deep, made clever choices (eventually), and won the day after working hard but smart. Upon second play through on a tougher difficulty, I used the smarter tactics earlier on, to wage an entirely different full-stealth assault on the enemy, and it felt glorious! Laying booby-traps in doorways, bunker-busting groups of infantry with grenades for multi-kill bonuses, lining up grunts for two, three and even four for one trick shot, and pin-pointing those vital organs for lung, liver, heart, brain and even testicle shots; I found so many intricate ways to joyfully obliterate the enemy as a one-man-army. Find a vantage point, steady yourself, let your heart rate drop below 80, empty your lung and in your own time, take a well-placed shot. Survey destructible items, and identify vehicular weak-points such as vents and petrol caps to inflict maximum damage. Above all else, never forget to reload. My personal "pro tip" is to master your control layout, as when you get into the gritty heart of a sniper battle and run out of ammunition, you're usually left with relatively inaccurate side-arms and fiddly gadgets that are nowhere near as reliable or straightforward in dispatching the bad guys. 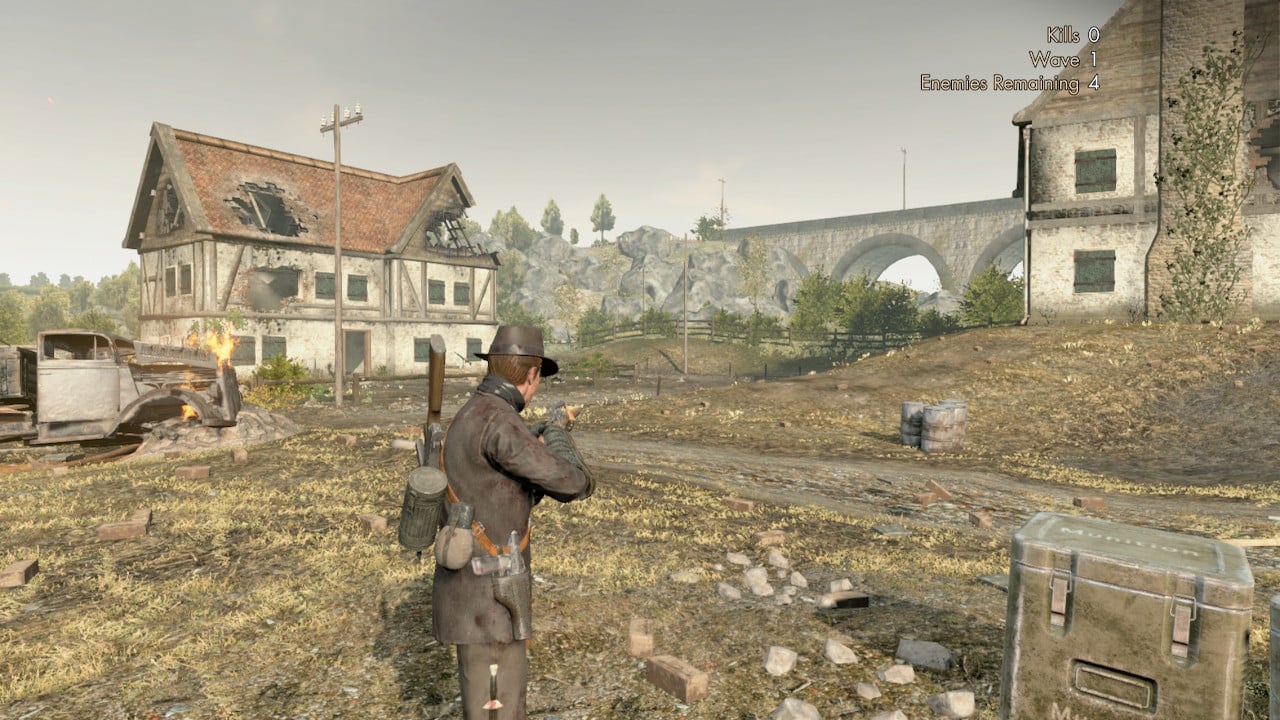 While I had no issues significant enough as to ruin the experience, two stood out to me in particular. First, the mantle button "A" not being the "B" button; I became a bullet sponge by popping up and down behind walls I thought I would be effortlessly gliding over to deal out some stylish damage, and secondly the clipping/boundary boxes of the vehicle/building models. Now the latter issue here is significant, but if I remember correctly it was also present in the original 2012 release, I just assumed they would edit or modify this to be less 2012 and more 2019. When in close-range to a vehicle or building that you can use for cover, you will find that trying to shoot past an object that appears to be well-clear of your scope (you can see and aim perfectly) will cause your shot to stop dead in the model in front of you, fully alerting the enemy and giving away your position. It feels like some objects have been clipped quite lazily, meaning that rather than aiming inches away from an object to shoot around it, you have to move yourself in-game feet away from wooden frames or metal bars in wreckage to get a successful shot at the enemy. The initial learning curve on this particular issue is extremely jarring, and it takes a while to adjust and realize what will and what won't work, but once you do, it's game on!

Overall Sniper Elite V2 is a superb port that has been truly souped-up for Nintendo's incredible portable, but if you've played any of the other Sniper games in the series, you'll undoubtedly know that there are better installments out there that frankly may never make it to the Switch due to its limitations. As a huge fan of the series since it's inception I feel Rebellion have done themselves proud in even remotely making this a reality and giving a new generation of players the chance to experience a stellar title with all the trimmings. For fans like myself this is an essential purchase and one that is guaranteed to remain fun for countless hours of game play thanks to the baked in DLC, multiplayer modes and achievements I can knuckle-down and hoover up. If this is the caliber of their first outing for Switch; I can't wait to see what's next from Rebellion.