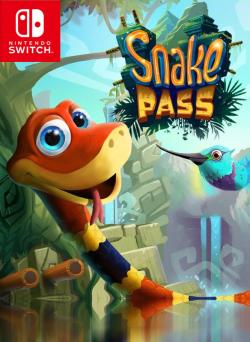 The Result of Sumo Digital's foray into Noodle Physics, have they created more than a concept piece?

The developers at Sumo Digital have created an interesting new platformer in the style of an N64 Rare title. The art style is very reminiscent of old Rare games, and David Wise of Donkey Kong and Yooka-Laylee fame has created the game's original soundtrack. This studio is well known for creating sequels to already successful franchises, such as Little Big Planet 3 and various Forza titles.


Of course it's a collect-athon
The game stars Noodle the coral snake, and Doodle the humming bird. The googly-eyed duo must traverse 15 levels to restore order to the 4 realms present in the game. In proper Rare imitation fashion, your humming bird friend Doodle can be used to fly in certain areas. Beyond the leading pair, and one mysterious red-eyed fiend, there are no other characters in the game. 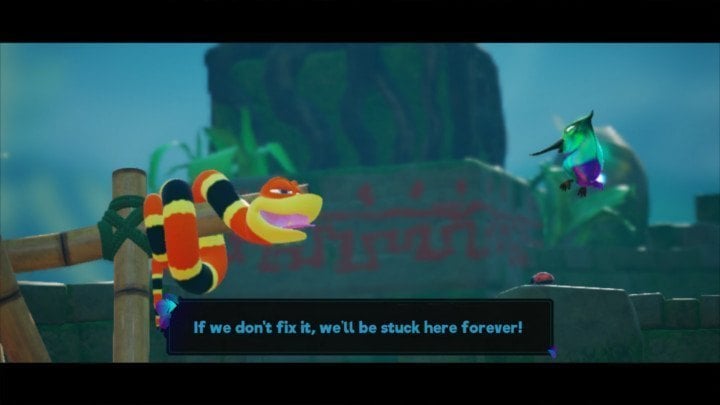 ​
Noodle and Doodle live in the land of Haven Tor. This land is connected by portals called "gates". At the outset of the game, the keys that open these gates have been scattered by a shadowy interloper. Noodle and Doodle must restore the gate keys to be able to traverse the different worlds, and to restore order to Haven Tor.

The world is bright and cartoon like, and has clearly been crafted in the style of early Rare games. The levels pop with color, and the game looks impressive in portable mode. The game runs very well, and does not suffer from obvious drops in framerate.

Haven Tor is polished, but it only contains 4 distinct realms, and the levels in each realm share the same art assets. Because of this, no level sticks out as unique. Further, the poles that are ubiquitous in this game never alter in appearance between levels. A few metal rods or stone formations to slither around could have really added to the charm of individual stages.

David Wise's soundtrack is endearing, but it is also limited in that no level has its own unique track. Despite this short falling, the score helps to create a relaxing atmosphere even during the most stressful parts of the game. Donkey Kong Country fans will recognize a few riffs in the soundtrack for Sog-Gee's realm. 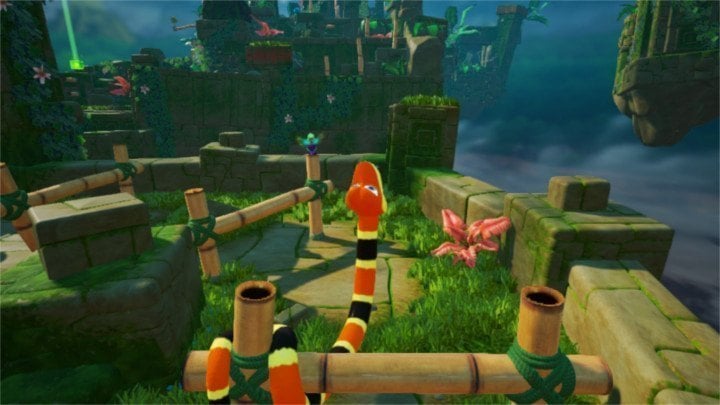 ​
​
As for the gameplay itself - Snake Pass's first level starts with a crash course in Snake physics, and from here Noodle and Doodle must collect 3 Keystones to pass each level. There are also 20 blue orbs and 5 gatekeeper coins scattered about each stage - which are optional.

Gameplay centers on snaking around poles, and generating momentum to leap from one platform to the next. This formula is upset by underwater areas, lava pits, and strong gusts of wind. But essentially, there is little evolution in terms of gameplay throughout Snake Pass's short playtime.

The game really shines in certain areas after you've gotten used to the unique control scheme. The player can move Noodle's head independently of his body, and must move Noodle from side to side in order to pick up speed. Movement is hard to master, and it is often required to control Noodle's body in three dimensions to wrap around poles.

Once you're comfortable controlling Noodle, it is very rewarding to glide past multiple poles, with only sky beneath you. I found myself exhilarated when I'd barely managed to latch onto the other side of cliff overlooking a deep chasm. Some platforming segments are not well crafted, and are not very fun. These trials bring the game to a crawl, as Noodle has to very slowly coil around a pole - and move from one pole to the next, often succumbing to the unforgiving physics engine, and falling off. Fortunately, most difficult areas have check points right before them, and so they can be attempted many times in quick succession. The few that have no checkpoint before them are a chore to complete. 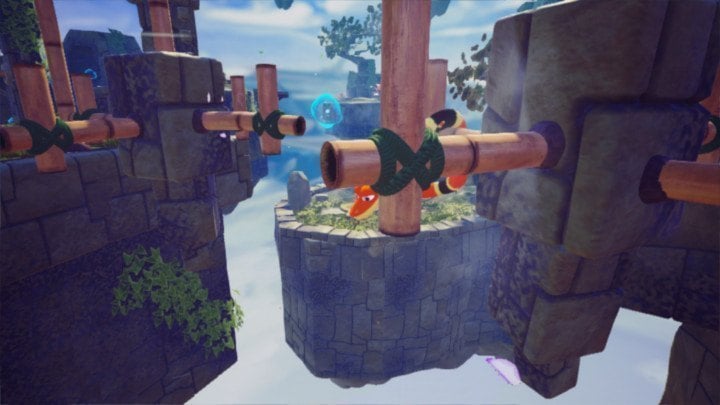 ​
While ground movement can be difficult, I found the swimming mechanic to be quite smooth. It's a blast to control Noodle's depth during the brief underwater segments. The game could've done with more of these.

Still, it's admirable that the developer took the idea of a line that can move in each axis, and created an entire game out of it.

This is the only Rare inspired game that I've played that does not contain any enemy characters. This aspect of the game is interesting because it creates a friendly and non-threatening environment. No baddy is going to force you to engage in combat, and so you become more comfortable, and you really feel as though you can move along at your own pace.
Verdict
chavosaur and T-hug like this.
Like this review