Single player
Local Multiplayer
Online Multiplayer
Co-operative
Discover your way to save a captured princess from a sunburned dragon in this magic-filled retro platformer.

This statement will hopefully serve as a warning to all wizards; never hastily leave the castle! You may just forget to bring your spare wand, hide your book of spells, and lock the laboratory door. No matter what else slips your mind, never, ever forget to return your curiously naive nephew to his parents. If a sunburned dragon happens to kidnap the princess and your spells get scattered everywhere, your nephew may end up mucking about in grown-up matters. Then again, you never know, maybe your nephew is up to the task. Perhaps, with a lot of luck, he can rescue the princess, save the kingdom, and clean up before your return.

Slightly Magic is the brain child of Colin Jones, a UK-based writer and programmer who first introduced us to the Slightly universe back in the early ‘90s. Developed as a character driven platformer, Slightly Magic utilizes an object based puzzle mechanic made popular by Coadmasters’ Dizzy. This puzzle mechanic places different objects throughout the level that must be used at a specific location in order to advance the game. Where Slightly Magic differs, however, is through the inclusion of a 'magic' mechanic. This additional mechanic adds spells that are made possible through a combination of two objects. The automatic inventory combination of a specific spell word and a found object will create a spell that can aid Slightly within a section of the game. As the game advances, so do the effects of the spells, eventually altering Slightly’s physical appearance. This bodily altering magic will allow Slightly to swim, fly, or turn invisible, three important gaming mechanics that are required to complete the adventure. A magic meter will appear once the wand and spell book have been linked, and doubles as a health meter for Slightly. Magic can be drained in different ways, including both enemy encounters and spell usage. Magic can also be replenished by collecting spinning yellow stars located throughout the game world. While utilizing these gaming mechanics, Slightly must be navigated through various perils across 5 different areas to complete the game. 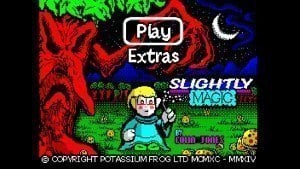 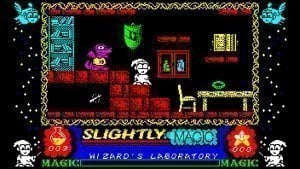 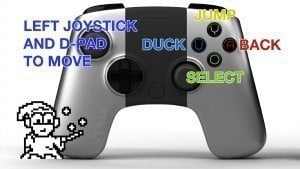 Slightly Magic on the OUYA was released after an unsuccessful Kickstarter campaign showed enough renewed interested to warrant an 8-bit legacy edition. The campaign was launched after Colin Jones felt he could produce a updated version of Slightly Magic for modern hardware. As the core of the game was carefully preserved, other things were updated and changed to meet this goal. Graphical limitations of early ‘90s hardware, such as the ZX Spectrum, forced some sprites to take on static background colors. This classic graphical annoyance was one of the first things Jones addressed. In an effort to make the entire experience more enjoyable, some game play elements were improved as well. These updates remain very subtle, such as how spells operate from within the menu, and work towards greatly enhancing the flow of the game. In addition to a remastered musical score, a commentary track was introduced for each of the playable areas. This commentary track is as entertaining as it is informative, and offers a great reason to play through this adventure more than once. 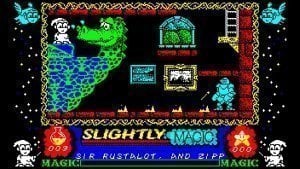 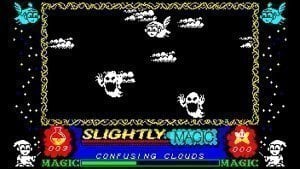 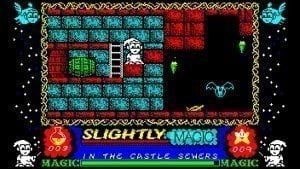 The core game mechanics are comprised of a challenging puzzle element that forces exploration over brute platforming. It is the discovery of which object solves which puzzle that creates the greatest sense of accomplishment. While pure platforming may feel outshined by the puzzle element, it has not been forgotten. Slightly Magic requires jumping, flying, and swimming throughout maze-influenced level designs that will have you replaying some areas in an attempt to achieve the perfect run. OUYA controls feel smooth and responsive, yet somewhat cumbersome. There is one button for inventory, one for canceling out of a dialogue box or menu screen, one for ducking, and another for jumping. The issue is not the existence of this control scheme, but the developer assigned OUYA controller button bindings. It may take some gamers a few rounds to become completely familiar with them, something a custom binding option could have alleviated. 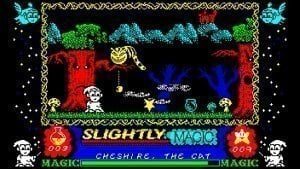 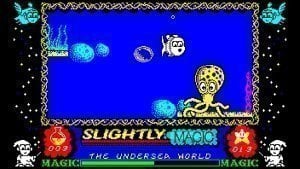 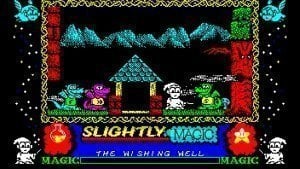 Slightly Magic is a platformer from a by-gone era of gaming, when games were geared towards more fanciful emotions. The entire adventure feels like an interactive children’s fairy tale filled with nice characters doing mean things by accident. What starts out as a complex series of puzzles will have you feeling satisfied upon their completion. The updated graphics are a wonderful edition to the game, and feel completely original yet modern at the same time. The enhanced musical score and retro-sounding voice tracks both add an enjoyable level of atmosphere to each area of the game. All of the modern improvements sucessfully build upon the original vision of the game, helping to make the 8-bit legacy edition of Slightly Magic one that every fan should experience.

The release of Slightly Magic for OUYA rekindles a classic adventure through visual, audio, and gameplay updates. This is retro character-driven puzzle-element platforming at its best.
Reactions: T-hug
Share:
Facebook Twitter Reddit Pinterest Tumblr WhatsApp Email Share Link
You know what would've been really really easy to do and would've improved the game for many?

This: http://eab.abime.net/showpost.php?p=963300&postcount=2
Reactions: T-hug and The_Hulkster
Is it good on iOS?
Colin Jones originally asked me to keep this information out of the review because he wanted new gamers to experience everything before "cheating". Now that OUYA has been sold to Razer, I don't see the harm in publishing this information in the comments section of this review.

near the start of the game to your right,
up the dragon steps, you face the lovely big huge dragon face. Here
the breath is harmless, so if you walk slightly to the right, then
when you start falling keep to your left, you'll find....
Click to expand...

If you have the game, give it a try.