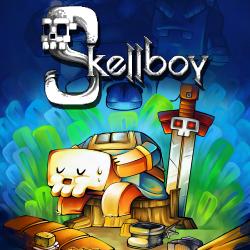 Don't lose your head! Skellboy is a stylised action-adventure game with some rocking chip tune tracks.

Imagine a game where you blend elements of Zelda, Paper Mario, and Scribblenauts into one little well-humoured RPG. If that sounds like your kind of jam, then Skellboy should be right up your alley. Skellboy is just £19.99 in the Nintendo Switch eShop, but does it add up to something that is essential or is it going to be just another style-over-substance Action RPG for the console?

In a rather cliché but apt story, Squarumon, the ancient wizard, has his heart broken by a princess, and in an act of rage casts a spell that calls upon evil spirits to raise the dead. Unbeknownst to him, he also resurrects the heroic skeletal remains of the main protagonist, Skippy. Starting the game you find that the scriptwriters had an absolute blast fitting as many relatable puns as they could into the narrative by way of a little stage play-looking introduction. The humour prevails and you immediately get a sense of the minds of the creators; it's guaranteed to be an enjoyable read with quirky characters and a heavily stylised mythos. The main objective is to infiltrate the Cubold Kingdom, talk to the townsfolk, discover its secrets, and vanquish the variety of enemies and bosses you come across. 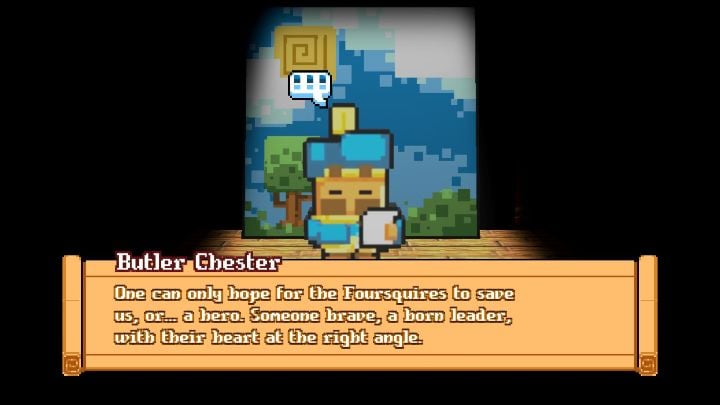 As you venture around Cubold, slaying the undead and smashing everything in your path, you get the opportunity to upgrade yourself at every turn in an effort to find the best combination for maximum damage. Head, torso, feet and weapon are all interchangeable as you can alter your appearance in a number of profound ways, such as blending in with your surroundings and becoming invisible to enemies or fully armouring up to take on the tougher foes with ease. You have a whopping 66 body parts to combine as you wish, which comprise of 14 choices of head-gear, 15 varied torsos, 15 styles of footwear, and a substantial 22 weapons available to you to thwart your enemies. This ultimately makes the number of possible outfits in excess of 69 thousand!

Combining related items into a complete ensemble offers set bonuses whereby you get granted huge gains pertaining to various traits. For example, if you dress head to toe as a Zombold, you will be invisible to Zombolds. If you cosplay as a knight, you get strength or speed buffs. And if you have a penchant for gold, dressing like Midas will afford you great fortunes on your journey. The crypt offers great insights into these combinations, so make sure to visit regularly, but if you feel like wearing a Crazyshroom Cap, Royal Tunic, and Bat Shoes, you will be invisible when stationary, have extra health and find you have fleet-of-foot, making your travels far quicker. Be warned though that using cursed gear or wearing certain enemies’ heads can invert your controls or gradually steal your health making the game hilariously panic inducing while you attempt to quickly fix your stitched-up issues. Though the majority of items feel single-use and blatantly purely cosmetic, it has to be said that there is some fun to be had in experimenting and discovering the best selection to own as you progress through the blocky locales. The soundtrack throughout is unapologetically chip-tune to its very soul, and though it fits perfectly with the overall styling of the game, the tracks are exceptionally repetitive and really get on your nerves very quickly. I had to resort to turning down the in-game music as I just couldn't take it anymore, it was honestly torturous. Some games have thumping modern soundtracks, others have earworms that you just cannot get out of your head, but in all honesty, I, unfortunately, found it to be a guaranteed migraine maker. 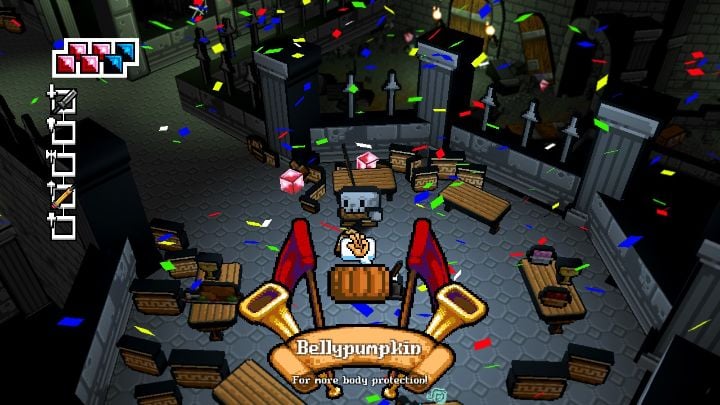 Controlling your hero is as easy as pie thanks to an extremely stripped back and simplified control scheme. Effectively you change weapons with L/LZ, interact with A, fight with X, jump with B, and movement is controlled with the analogue stick. Overall, it could not be simpler to pick up and play. Though almost everything in this title is simplified and kept to a minimum, that is not always a good trait. Combat feels exceptionally weak with an overly basic slash mechanic that has no weight behind it whatsoever, and as such, there is no satisfaction to be had by bluntly smashing bad guys to pieces. Sure, thumping enemies is fun at first, but it quickly becomes a chore that requires less skill than it does timing, and as a result, the gameplay suffers from exceptionally repetitive and boring combat. When you come to an interesting boss fight, this is where you are truly tested, and it feels like a fair and solid contest against a tricky enemy. Boss battles are the single most exciting, action-packed parts in Skellboy, mainly because it’s fun to figure out the weak points, weapon limitations, patterns, and how to use the environment to your advantage. Thankfully the bosses, or rather mini-bosses, come thick and fast too at a rate of roughly one per forty minutes of play during my sessions, making it a nice break from the norm, and often dropping unique armour or items that I could use to unlock paths I was stuck on earlier in my adventure. 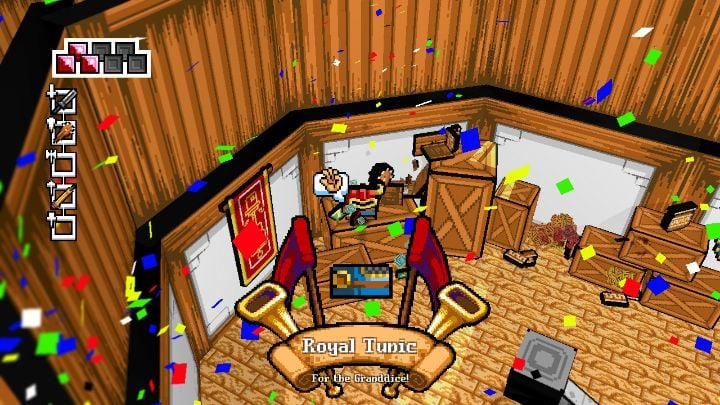 Skellboy is isometric to the core and lovingly stylised but unfortunately, it is relatively repetitive and quite frustrating at points, which only leads you to vaguely attempt to backtrack, just to figure out what you missed along the way. Perhaps it’s the chugging framerate or the graphical pop-in, but I found myself getting a bit dizzy, trudging around, lost and confused a few times, leading me to want to simply restart from a checkpoint. At one point I had to tap out and take a 30-minute break playing in portable mode as the framerate became excruciatingly jarring, and in a move to mitigate this nauseating feeling, I swapped to playing it with my pro controller in docked mode, which made zero difference. Most notably in the first section of the swamp, you get overrun with Zombolds and the framerate dips a tad, but in the later dungeon stages, especially with bombs and lots of breakables, the game virtually grinds to a disappointing halt.

A complete lack of side-puzzles and fun quests to complete also drops the stature of this game to what is, in effect, just a simple roleplay hack-and-slash. It just feels like there is absolutely nothing to do in between locations and mindlessly hacking up hordes of grunt-level enemies. Sparsity could have been broken up with generic collectables, puzzle elements, and more action throughout rather than piling on the graphics-intensive particle effects and slinking around sparse backdrops. This game has aspirations on being a classic, clearly drawing inspiration from bigger, better games, but it is not quite well-rounded enough to make it right now. You can feel that Skellboy's developers were well on their way to becoming crafters of something fantastic, and if it spawns a sequel that learns from its mistakes, they could well become legends. Being that it's child-friendly, uniquely comedic and aptly assorted in nature, Skellboy contains all the building blocks required for a cult following and a possible speedrunner’s delight. In terms of it being an essential purchase, I can't quite recommend it above and beyond all else, as it does narrative and comedy right, but dulls itself into oblivion by giving you very little to chew on as you go.