The Sidetrak Slide is a portable monitor solution that mounts right to the back of any laptop to give you the dual monitor life you never knew you needed. Is it any good? 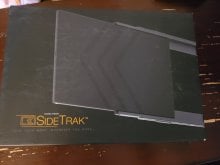 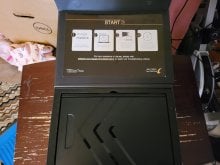 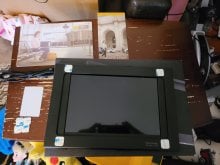 Have you ever been working on a laptop and thought “Gee, I really wish I had another screen here so I could better optimize my productivity and workflow, but I wish I didn’t have to carry it around…” Well, Mr. Oddly Specific Thought Man, now you can thanks to the Sidetrak Slide from Stand Steady! The SideTrak Slide is a portable monitor solution that’s designed to attach straight to the back of any laptop, providing a 12.5” 1080p IPS monitor that can be plugged into any PC’s USB 3.0 port! But does it work well? 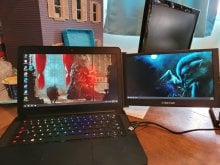 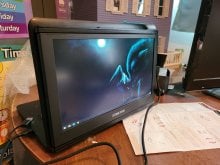 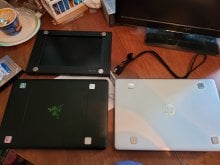 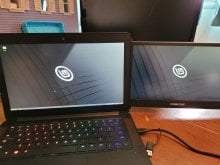 First we’ll take a look at what you get if you buy your own Sidetrak Slide. Opening up the box you’ll find a nice installation guide, the device itself, four extra magnets, and a “magnet removal tool” which is basically just a plastic card. Mounting the SideTrak Slide is incredibly simple and basically takes less than a minute; you remove the film off the sticky pads on the magnets that are already in place on the mount, stick it to the back of your laptop (making sure the arrows on the plastic are pointing in the way you want the monitor to slide out to!), and push down gently on each corner where the magnets are located. Bam, done! And if you ever want to temporarily remove the mount from your laptop, it’s as simple as pulling them off the magnets. Very intuitive and easy to do, which is great, although having four random magnets sitting on the backside of your laptop’s screen looks kind of...weird. Once you’ve mounted the Slide to the back of your device, you’ll be able to slide the monitor on the rails to your preferred position, following the direction of the arrows, as the mount only slides one way. You can also swivel the monitor 180 degrees, allowing you to display data on the backside of your laptop without having to turn it around! Neat! Once you’ve slid your display out, you can plug it in via the included USB-C -> USB-C cable (which includes a USB-A adapter on the end, which is a nice touch), install the required drivers, and after a minute or two your second monitor will turn on and you can start your hardcore multitasking!

The SideTrak Slide utilizes DisplayLink, which is a VGC protocol that allows devices to interface with supported external displays over USB. Thanks to this software, the SideTrak Slide officially lists supports for Windows, macOS, and ChromeOS, however because it uses DisplayLink you can also use the monitor on most Linux distros, with official support for Debian, and unofficial support for other flavors like Arch or Fedora, as well as Android 5.0+. I was able to personally get the SideTrak Slide to work on all of the above (including even a Raspberry Pi, albeit with some additional fiddling and setup required), although something to keep in mind is that the Slide does need at least 4.5W of power, so if your device can’t output quite that much you may want to look into a powered USB hub. This is great for anyone who happens to dual (or in my case, triple) boot multiple OSs on their daily driver, because you’ll always be able to use your second screen regardless of what OS you're using. In terms of display quality, it’s pretty great thanks to its IPS panel and 1080p resolution, although something to keep in mind is that there’s really no way to calibrate anything on the display that I can find, even for something simple like brightness, so what you see is what you get. In regards to display lag, I probably wouldn't game on it as it has about 30ms worth of input delay, (which is less than noticeable for simple things like word docs or watching a video) but to be honest I wouldn't really recommend using it for games in the first place given it's just a 12.5" screen, and your main screen is more than likely going to be bigger and better suited to that.

And that’s all well and good, but unfortunately that’s where the pros kind of stop, because there are a lot of issues with the SideTrak Slide that just makes the entire thing unwieldy and not quite as useful as you’d think. First and foremost is the weight, because boy is this thing chunky. The Slide weighs a total of 1.65lbs (0.75kg), which means you’re adding over a pound and a half of weight onto the screen of your laptop. If your laptop’s hinge can’t handle an extra 1.65lbs on the top end, your laptop is basically either going to close all the time on you or unfold itself all the way. This is the case on my budget HP laptop. Even if your hinge is strong enough for that extra weight, if it’s a bit light on the bottom half your whole laptop is still simply going to tilt backwards, as in the case with my 2017 Razer Blade 14. Unless your hands are on it or the screen is tilted forward enough to stop it from falling via gravity, it's going to tilt itself backwards. And this is on a flat surface like a table, if you’re working on a non-flat surface like say a lap, the moment you move your hands off the bottom it’s basically guaranteed to fall right off your lap and potentially on the floor. Not exactly something you want to happen if you’re using an expensive device like a laptop. Then there’s the quality of the overall build, specifically when the monitor has been extended: it WOBBLES. There’s simply no real support for the monitor itself besides the very edge of the rail, which results in this thing being unstable as all get out, which you can see in the video above. There’s just so much movement in the mount, especially when you’re just typing on the laptop, that it causes not just the Slide to wiggle and move, but your main laptop screen too thanks to all that weight. Some may get used to that eventually but for me, personally, it’s just too distracting, especially when I’m working. And then there’s the price: for the SideTrak Slide, you’re going to have to put down a fat $299.99. While it’s certainly not the most expensive portable screen out there, and it does have a nice way to mount to the laptop directly, you can buy a 15.6” 1080p screen for half the price, or two if you wanted to live that triple monitor life...for whatever reason. The idea to mount the screen directly to the laptop is a great one, but with the rather lackluster implementation done on the Slide I’m not so sure it’s worth all that extra money. 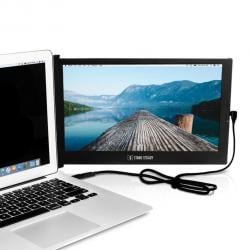