Single player
Local Multiplayer
Online Multiplayer
Co-operative
Console games getting ported to mobile is nothing new, with anything from retro 16-bit games like Sonic to classic AAA 3D games like Resident Evil 4 getting put on a smartphone. But what about a mobile game getting ported to a console? Seems like it wouldn’t work for most games, but that’s exactly what Capcom has done with Shinsekai: Into the Depths. How well does the transition to console work?

Into the Depths takes place in a world where land has been completely frozen over, forcing mankind to retreat into the ocean for survival. Over the years, civilization has fallen, and the ice has made its way beneath the ocean. Only a lone Aquanaut remains, living a safe but mundane life of repetition and survival, until the ice makes its way to the Aquanaut's home, forcing him deeper into the depths of the ocean for survival. It’s here where the Aquanaut meets a mysterious drone and enlists its help, embarking on a grand underwater adventure to collect resources, find safety, and generally explore the unknown. The beautiful thing about this story is that it’s all told visually. There’s no voice acting, and no dialogue boxes. Just experiencing the world and discovering the story as you go. 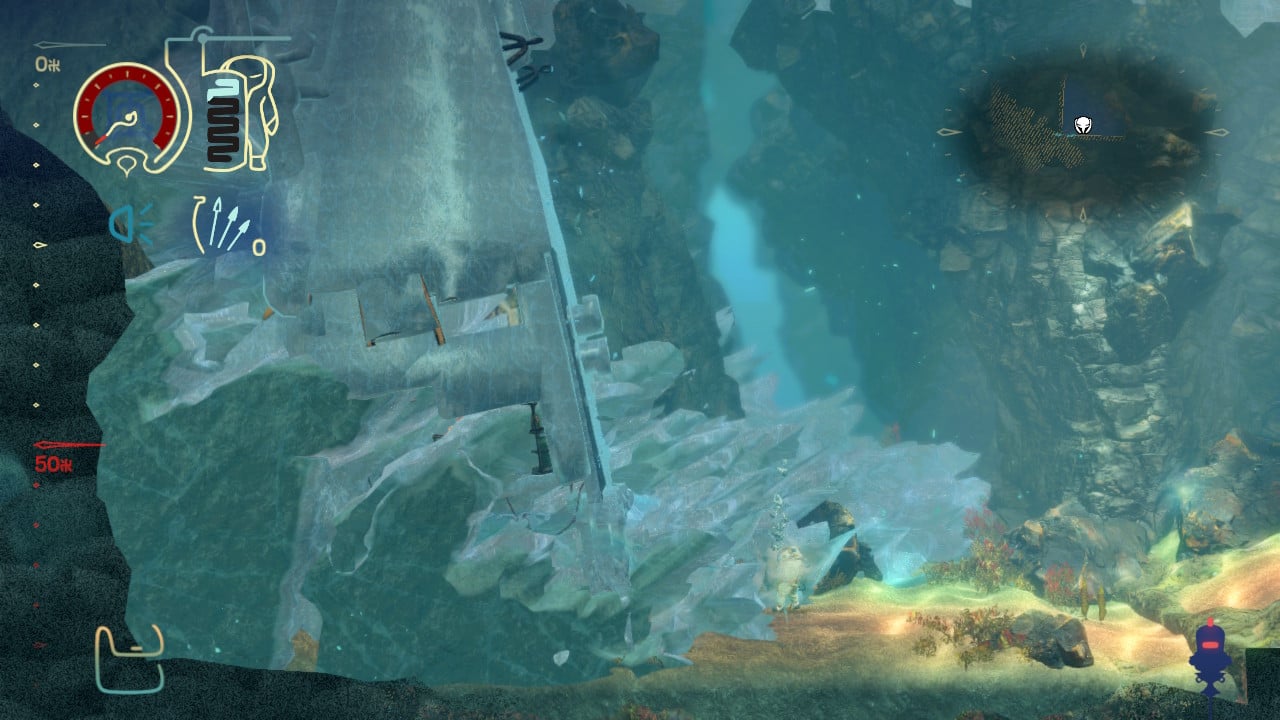 The atmosphere is immediately captivating. Capcom did a fantastic job designing this underwater world, and making it feel totally alive all around you; sea creatures are always surrounding you, hostile and non-hostile alike. The ever-present threat of the ice can be seen just about everywhere, closing off some paths as you go through them, and reminding you of the dangers that await you. Cars, roads, buildings and item containers litter the underwater, a reminder of the civilization long passed. The colors all pop, outlining the beauty of the ocean around you. Yet there’s an air of mystery to the whole thing, encouraging exploration naturally and keeping you on your toes. Honestly, it’s all a bit breathtaking. The visual atmosphere is amplified by the sound design and mixing. The soundtrack has a peaceful and mysterious tone, making the game totally relaxing to play without removing urgency. It gets even more immersive when you wear headphones, as the game suggests. Capcom succeeded in creating a truly beautiful world here. 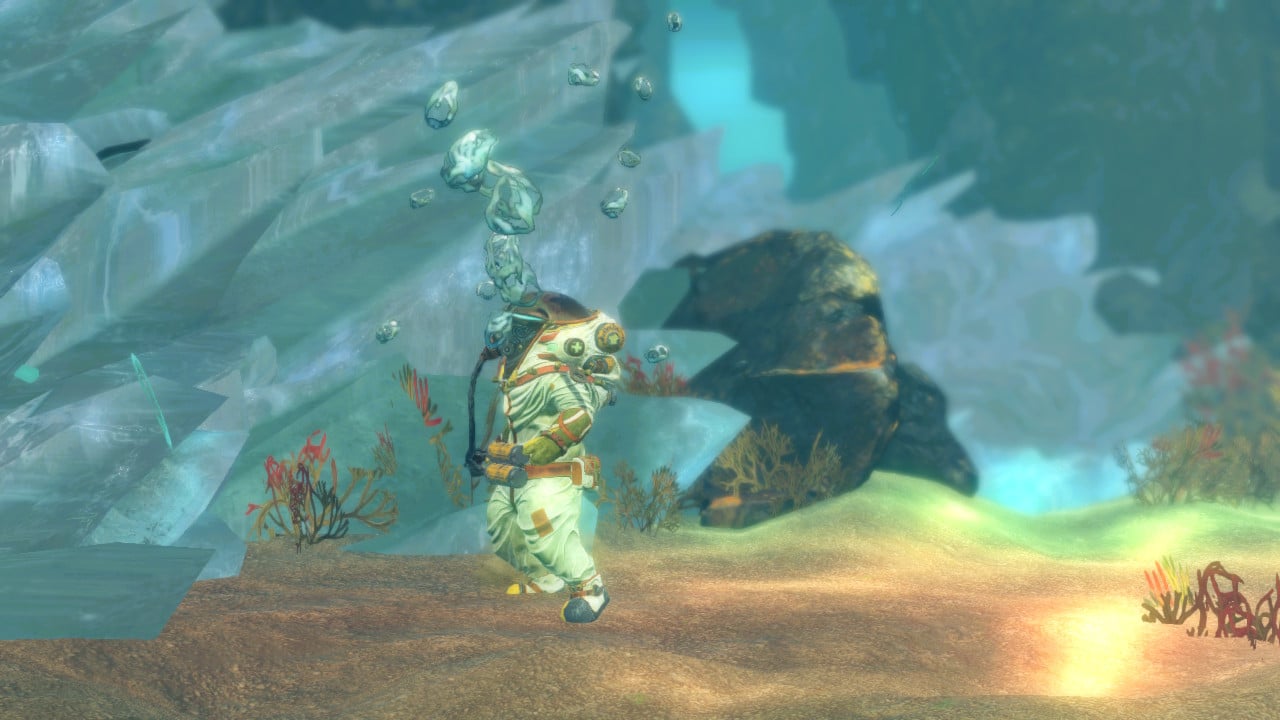 ​
As a game that started as an iOS game, I honestly wouldn’t have expected it to look so good on a home console. But that’s not the case here. The game scaled beautifully for a home console, and it looks even better in the Switch’s handheld mode. Granted, it doesn’t look incredible. Truth be told, it looks a bit like a game from the Gamecube era, but the stylization of the graphics helps to mask this a bit. It outlines the intentional art choice rather than just seeing dated graphics. And even without the most cutting edge graphics, it doesn’t change how beautiful the atmosphere is otherwise. 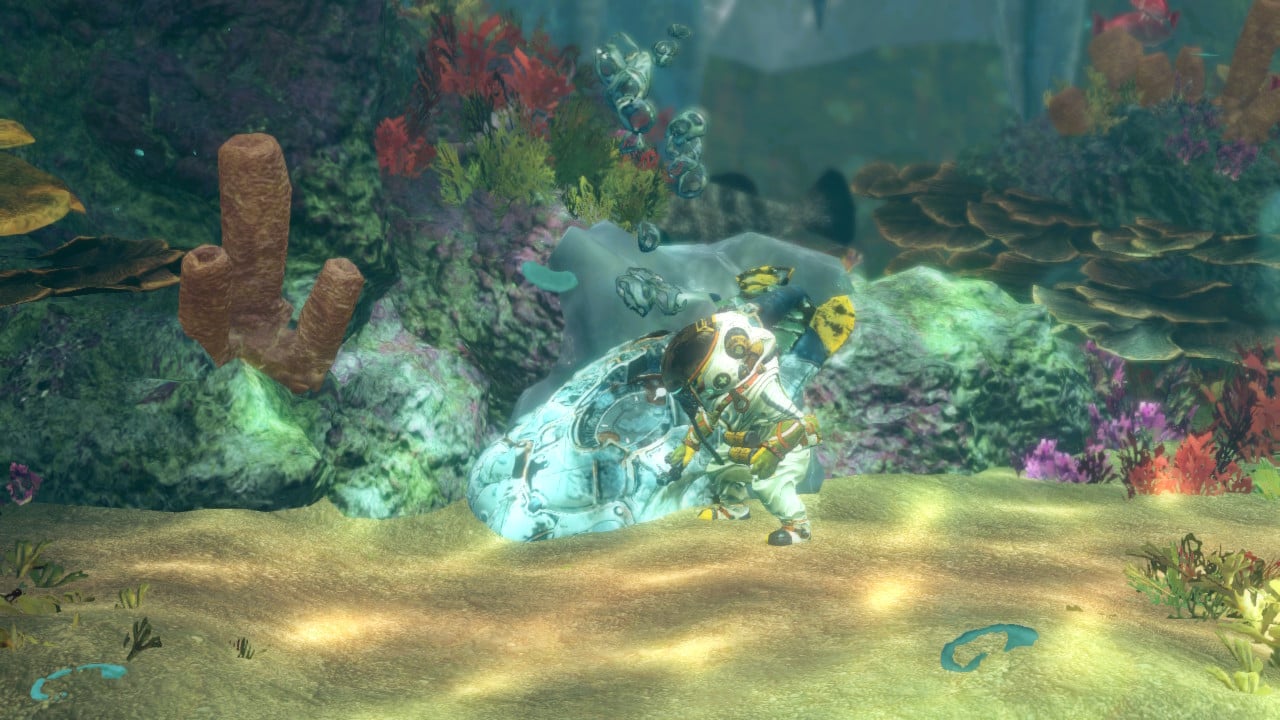 Gameplay is unique in Shinsekai, due to the game taking place almost entirely underwater. Your health is measured through your oxygen level, and damage sustained by your suit. As you play, you slowly lose oxygen, and will need to find more to stay alive. You can find more oxygen through air pockets with bubbles, or by finding spare oxygen tanks laying around the levels. For movement, you can get most places by traversing on foot and platforming, but you can use your oxygen to propel yourself even higher by double jumping. Doing so eats up your oxygen even further, but it’s crucial for the exploration to do so. This adds some sense of urgency to everything you do, having to pay attention to your map to make sure you’re not wasting oxygen frivolously. That said, the air pockets used to refill your oxygen are found often enough, and are readily available at every save point, so it’s not very difficult to keep yourself from running out. 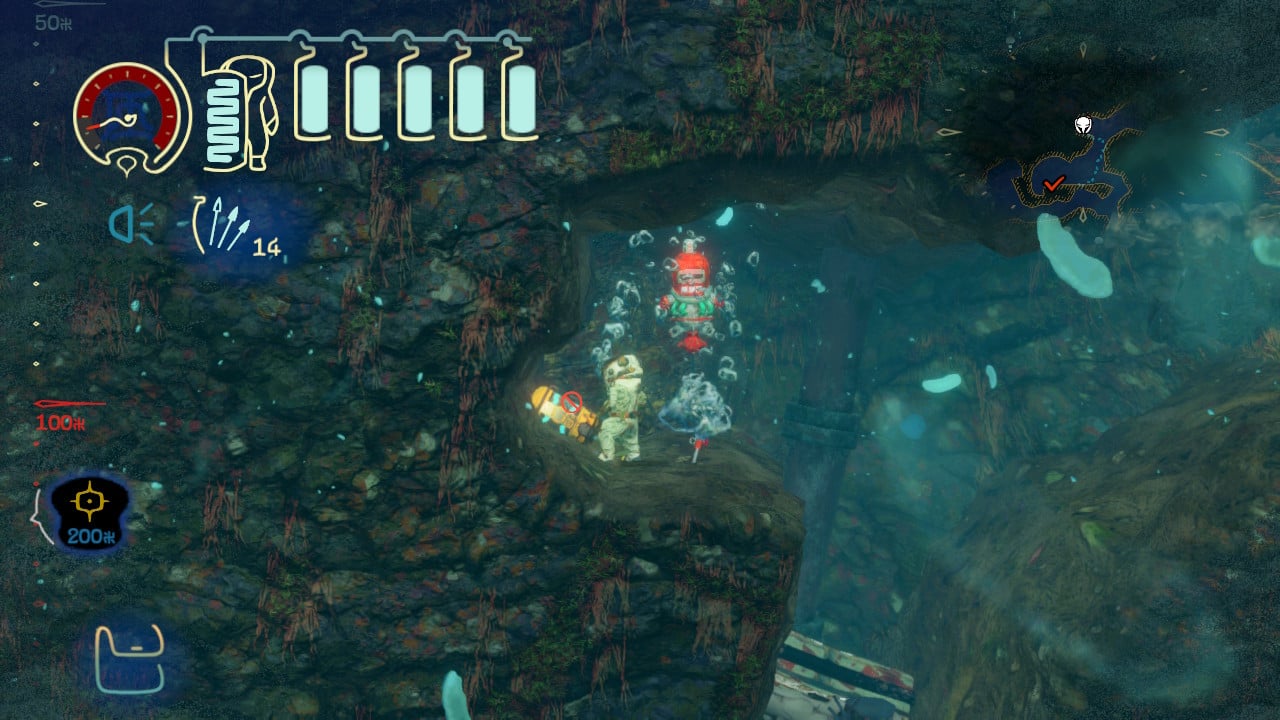 ​
You’re not stuck beneath the sea for the entire game. There’s small pockets of dry land and oxygen scattered throughout that you can easily access, and will have to so that you can progress. Capcom captured the shift between the sea and the land perfectly. The visuals hardly change, but you can immediately feel the weight of reality set in the second you emerge from the water. You walk a bit faster, but still slowed by the weight of your suit. You can’t jump quite as far. And you can’t propel yourself upwards with your oxygen anymore. Even the sound effects change to match. It’s a great transition. 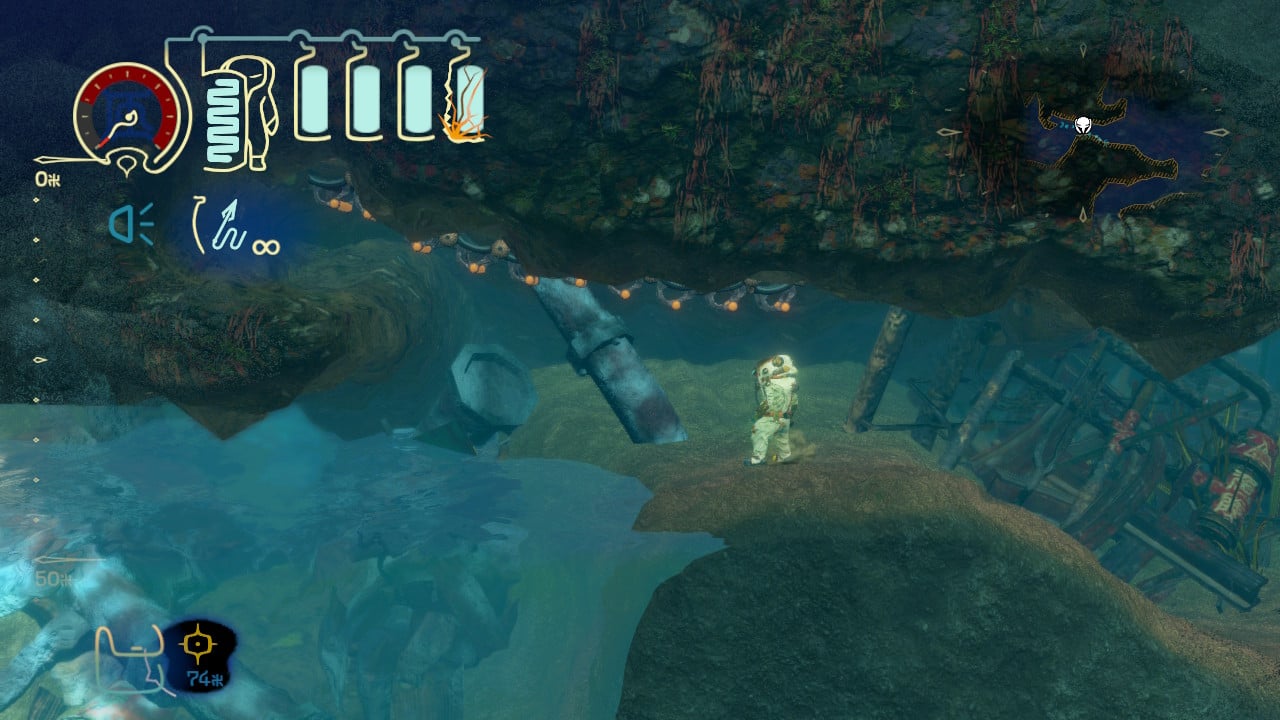 Shinsekai: Into the Depths is a Metroidvania, with an emphasis on the side-scrolling adventure. You’ll spend most of your time exploring the depths of the sea, searching for resources you’ll need to progress. Resources can be found either by mining at specific areas in the world, or by harvesting them from defeated enemies. You’ll find different resources in each way, so you’ll be doing a fair bit of both throughout the game. The major use of these resources is to upgrade your suit. Upgrading will let you take more damage from enemies and touching the ice, carry more spare oxygen tanks, climb on surfaces longer, and most importantly, increase the amount of pressure your suit can take from the depths. The emphasis on exploration is absolutely my favorite part of the game. That said, following the objective marker for the main plot and finding the next area to explore is a bit linear and not that difficult to follow. 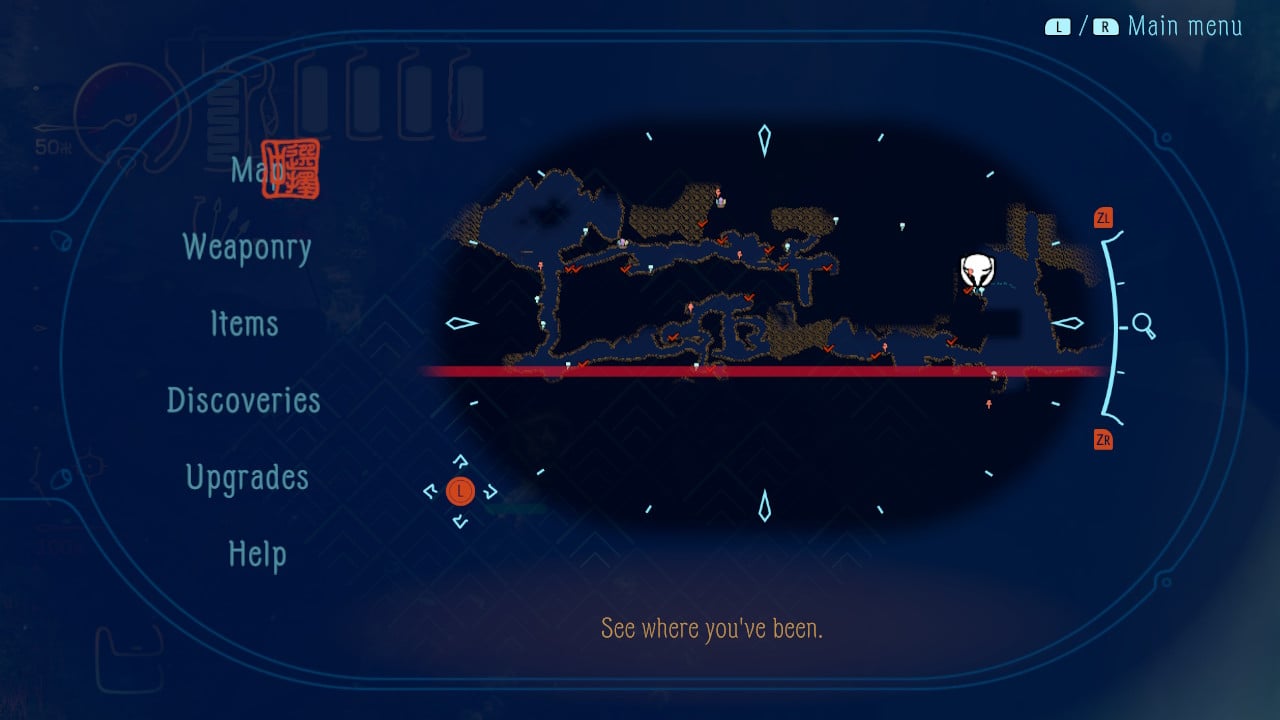 ​
You’re not alone in your exploration journey. As mentioned in the beginning, early on you’ll come across a long abandoned drone who assists you on the way. The drone doesn’t do much, but what it does do is very helpful. It’ll squeeze into places you might not necessarily be able to reach, and it’ll carry resources you might find laying around to you. It also gives you hints on whether you should be looking for resources to upgrade, or progressing towards the plot checkpoint. Overall the Drone isn’t useless, but it does tend to get in the way more than it helps. Still, it’s fun to have a little buddy around. 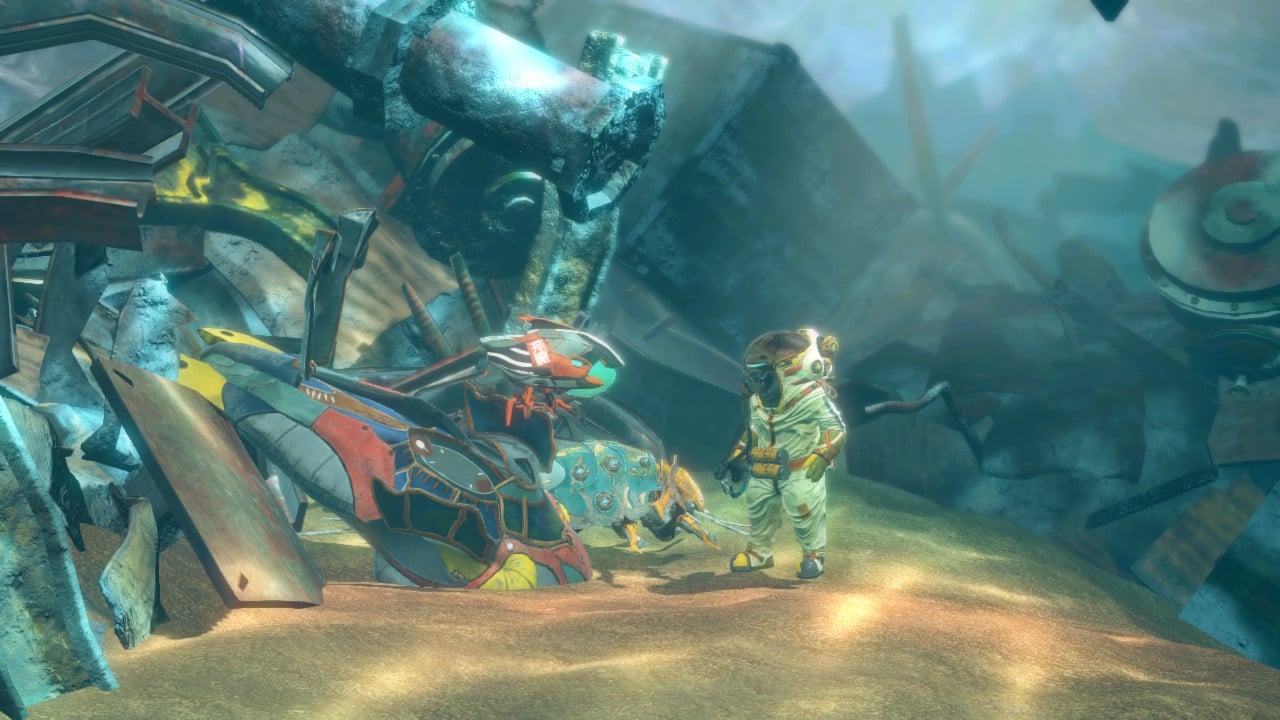 ​
Being under the sea, there’s perils everywhere threatening your survival. Hostile sea creatures will attack you if they catch you in their sights, leading to the game's fairly simple combat system. You can attack in melee range with your climbing hook, or from a range with your harpoon gun. There’s a variety of different types of harpoons you can use, from multishot to tether and pull, giving some strategy to the otherwise simple combat. Your health is measured by your oxygen, and taking hits will damage your spare tanks and suit, so choose your battles wisely. Combat isn’t the only threat you face, though. The ever encroaching ice is harmful to the touch, and impassible if it blocks you off. Finally, the ocean itself is a threat, as your suit can only handle so much depth pressure. If you go beyond what your suit can handle, you’ll quickly be crushed by the depths of the ocean. 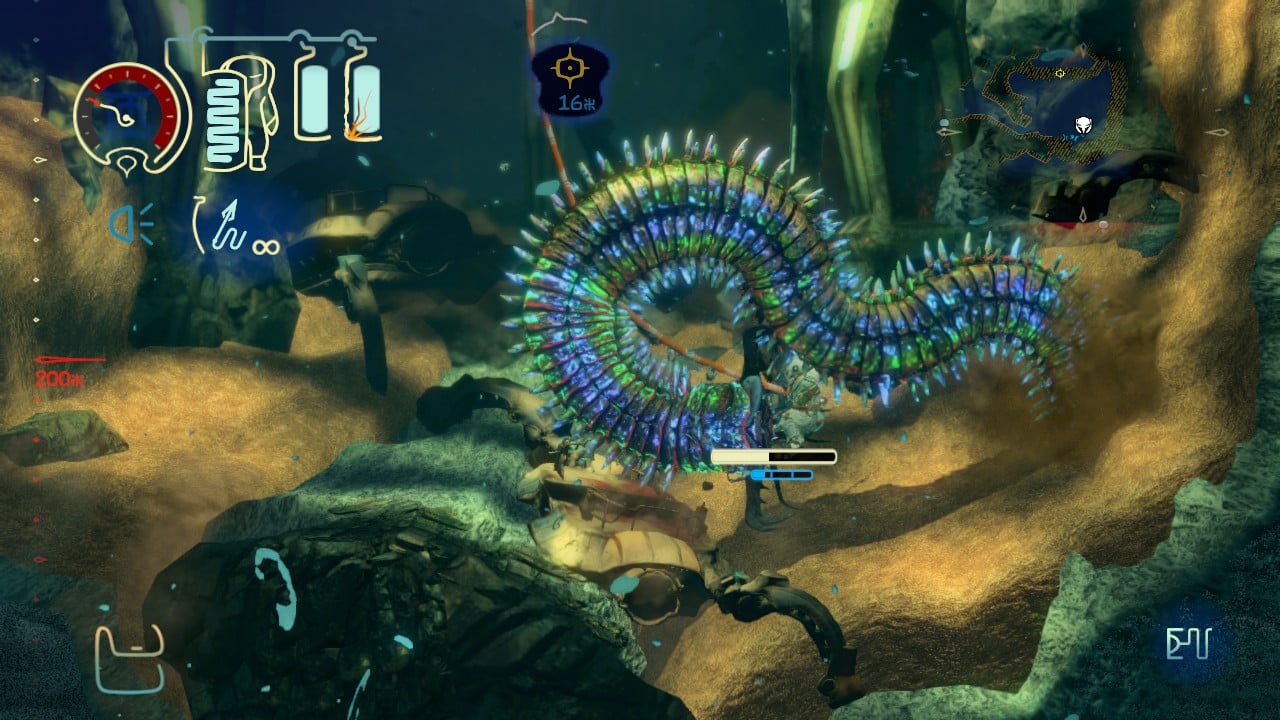 ​
Knowing this game came from the Apple Arcade, I was expecting some transitional pains in the controls department specifically. But that couldn’t be further from the truth. The game plays like it was designed for the Nintendo Switch. Some things might be a bit more streamlined with touch controls, but without them nothing feels awkward. It’s a testament to Capcom that they designed a game for mobile that translated to consoles so seamlessly.

What We Liked ...
What We Didn't Like ...
8
Gameplay
The underwater physics lead to unique platforming. Combat, while simple, is effective and entertaining. The scavenging and excavating of resources is satisfying to go through, and never feels like a chore.
9
Presentation
Between the visuals and sound of the underwater world, the presentation is absolutely my favorite part of the game. It's an equally beautiful and dangerous world to explore.
8
Lasting Appeal
With exploration being the emphasis of the game, you really get the most out of each level. Post-game, two different time trials are available to test your skills and give you reason to keep playing.
8.5
out of 10

Shinsekai: Into the Depths is a beautiful game of exploration and discovery. The standout mobile game is right at home on the Nintendo Switch, and I can’t recommend it enough to anyone looking for their next adventure.
Reactions: astrocapsule, diggeloid, lordelan and 2 others
Share:
Facebook Twitter Reddit Pinterest Tumblr WhatsApp Email Share Link
Seems like a nice little game. I am rather particular with my Metroidvania (which is to say I am not overly fond of either of those in that portmanteau, but the style in general is one with endless possibilities) and this one looks like it might be one that pulls if off. The lasting appeal bit has me worried as I kind of like something a bit more random or endless but time trials is not the worst thing available if the rest can be replayed.
Reactions: RyRyIV
GameCube graphics? Pass on what you are having, brother. Seems to me you don't have or played GameCube games.
Either way, it LOOKS beautiful, hope it really plays well. I think I'll try this one.

eyeliner said:
GameCube graphics? Pass on what you are having, brother. Seems to me you don't have or played GameCube games.
Either way, it LOOKS beautiful, hope it really plays well. I think I'll try this one.
Click to expand...

I hope you do try it! It's an amazing game that I thoroughly enjoyed. It plays nearly as good as it look!
I played this on Apple Arcade back when I was giving that a chance. It was definitely a lot better than I was expecting, but man the visuals are a mess. The game looks and (especially) sounds great, but the backgrounds are super cluttered in some areas and it can become difficult to see an enemy or even the player character. This issue is compounded when you're trying to play on a mobile phone screen, and even worse when you're using touch controls which require you to block parts of the screen with your hands.

But I did enjoy the game and felt it would be really awesome if it came to console...so now that it's here I guess I have to buy it now. Props to Apple for not requiring absolute exclusivity for their Arcade games. That's actually really awesome.
Reactions: astrocapsule