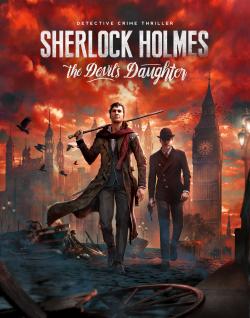 From the get go, Sherlock Holmes disappoints. As soon as you press “New Game”, you’re thrust into a snowy cutscene with Sherlock seemingly being hunted in a forest! Oh no! Well, it would be oh no, if it weren’t chug chug chugging like a frat boy at a party. Right away the game presents itself with some poor performance issues, seemingly unable to keep a stable 30fps during a cutscene. But surely this is just a cutscene issue, right? The game rolls back 48 hours earlier, where you see the new Holmes writhing on a couch and Watson tending to a fire. In comes Sherlock’s new neighbor, Alice, and a sniveling little boy who’s your new client…and again, the framerate starts chugging like a train. After a bit of investigating, I discovered these frame drops appear to be related to the facial closeups the game uses during conversations and character profiling. Even after attempting to fine-tune the sparse graphical settings, I still wasn’t able to keep the framerate stable during these sequences, and I’m running an OC GTX 970. Thankfully, the rest of the game appears to run well enough, the only dips you will experience is during conversations and when the camera passes a bit too close to any characters head.

But let’s ignore that for a moment, and get to the meat of the game. The Devil’s Daughter maintains the classic investigative-adventure gameplay the series is known for, featuring four and a half separate cases (the half being the end sequence, which didn't have the length or depth to be counted as an actual case) in a similar style to the previous game, Crimes and Punishment, with Sherlock Vision, character profiling, imagination sequences, and the Deduction system also making a return to the series along with the multiple endings created by those deductions. During each case you’ll come across the usual puzzles, lock-picking sequences, and house searches along with various case-exclusive mechanics, including shadowing a supposed criminal in the first case, various temple-esque puzzles in another, a pleasant game of lawn bowling, and even a human hunting sequence akin to the short story “The Most Dangerous Game” by Richard Connell!

One of the biggest issues with this game, however, are those puzzles. Almost all of these case-exclusive puzzles simply go on far too long, and brings the pace of the game to a standstill. The most prominent culprits were temple puzzles in a case revolving around Mayan lore, instead of relying on actual puzzle solving a majority of the puzzles boil down to simple trial and error. You have the option to skip puzzles, like in previous games, yet doing so feels so wrong in a game that revolves around puzzles.

The biggest change introduced in this entry in the series is the newest version of Sherlock Holmes himself. Frogwares decided to change up Holmes from the classic, rational, unfeeling calculator of a man to a more emotional, caring, "fatherly" character. And what better way to make a character more fatherly than...making him a father? Yep, in this rendition of Holmes, Sherlock has a daughter: Katelyn. Throughout the game you'll find various clues and insinuations about the "Devil's Daughter" in question, but unfortunately this makes for a rather predictable outcome towards that end "half case" that wraps the game up. While this is an interesting, new choice for a Sherlock game, I'm not sure it fits well with the Holmes mythos as a whole.