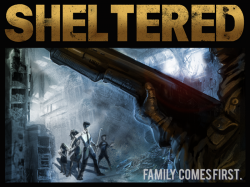 The world has been lost to a nuclear disaster. Everything you thought you knew and understood about living is about to be tested. Where will you go, who will you take with you, and how will you survive? These are the very questions asked of you in Sheltered, the life-simulation strategy game by Unicube.

Sheltered drops a preselected or customized group of four people (2 adults, 2 children) and 1 pet into an underground bunker clearly ordered out of a survivalist catalog. This is not a simple concrete room with a few cots and a supply of canned goods. No, this shelter comes complete with a generator, water and air filtration systems, a CB radio, hazmat suits, and a workbench. It seems to provide exactly what you will need to survive and hopefully thrive in the shattered remnants of a post-apocalyptic world. 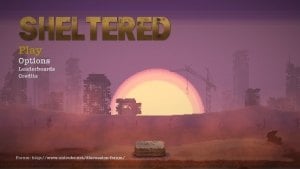 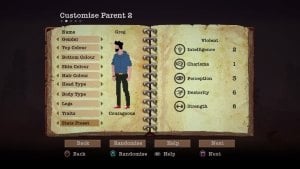 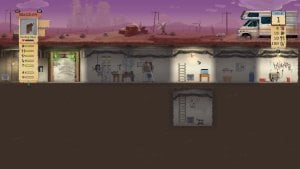 As the world around you cycles through day and night, it quickly becomes apparent that surviving means adventuring. While it is possible to trade for supplies from the remnants of society who visit your shelter, exploration is the main method by which to acquire these needs. Two community members can venture out at a time to explore the surrounding area, an unfolding map of various terrain and abandoned buildings that may hide much needed items and supplies. Their paths are plotted and then automatically executed until minimal interaction interrupts this process. These interactions include where to search, what to take, and who to converse with. Conversations unfold along simple dialogue trees and result in trades, fights, or even recruitment. Which items you collect is limited only by how much you can carry, which is an attribute that can later be upgraded through crafting. The items found in the wilderness and through trades vary greatly from parts and weapons, to food and children’s toys. Each item has a specific purpose that will only become apparent the longer you survive. Car parts, for example, can be utilized to repair an old RV camper jacked-up above the surface of the shelter. Broken radios and televisions can be recycled into their basic components, and those parts used to craft new things. Tools have a high trade value, but also help to outfit the crafting bench with a speed bonus. The way in which supplies are utilized will vary greatly between players. Will you craft a new bed and invite strangers to share your shelter? It is these types of decisions that provide a much needed uniqueness for the game and allow each player to attempt survival in their own personal way. 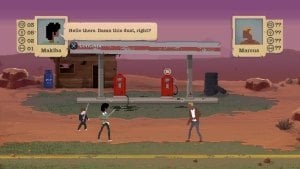 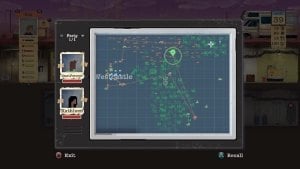 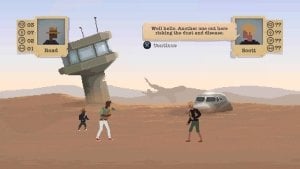 Not everyone will be trained enough for adventuring and those that remain behind will have equally important tasks to accomplish. As these characters go through their tasks they will need to be more closely micromanaged than those that are sent out into the wilderness. The shelter itself is the core of the game, it must be nurtured, defended, cleaned, expanded, and more. In a sense, it is as much a character as the people who occupy it. Maintaining the shelter and its occupants can feel like a tedious and somewhat repetitive task of point-n-click. At first the shelter is simple to maintain, with only a handful of items that require interactivity or repair. As the shelter expands, and things like bathrooms, stoves, and recycling centers are added, it becomes much more involved. Soon a rhythm of repairs, training, and crafting intermix into a flow that feels symbiotic and natural. A routine will form as you browse which things need repairs or upgrades and then assign individual jobs, while continually minding the health and well-being of the shelter’s inhabitants. On-screen stats, such as oxygen levels, gas supplies, and character thirst or sleep needs, make the micromanagement aspects less cumbersome. For those who do not like the micromanagement aspects found in life-simulation strategy games, a “robot mode” has been included that will automatically complete basics tasks without any player interaction. 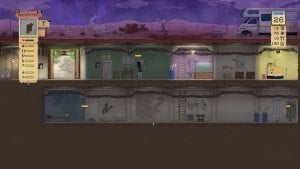 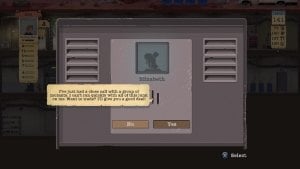 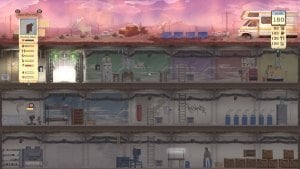 While it is entertaining to torture your characters into early deaths through suffocation or untreated health issues, survival becomes a desire once the full workbench is unlocked. Consisting of a collection of tools found while scavenging and 3 possible upgrades that unlock 4 tiers of craftable objects (5 if you include the “special” blueprint tab – blueprints can be found at random in the wilderness), the fully upgraded workbench becomes the center of the shelter. With it you can craft more storage (supplies, water, food), stoves for cooking raw meat, defenses (shotgun trap), basic amenities (bed, shower, toilet), items to aid exploration (rucksack, metal detector, binoculars), and survivalist upgrades such as a seed planter, ammunition press, and recycling center. It is the ability to craft and upgrade things that becomes the most addictive aspect of this game. An obvious course quickly presents itself, the more supplies you have or craft the further you can explore and the further out you go the more supplies you can have. Herein lies the biggest dilemma; how fun can the game be once everything is unlocked, fully upgraded, and crafting becomes seemingly less fun? Rest assured that Unicube currently has plans to release updates to the workbench that will allow for new crafting opportunities. If that does not satisfy you, it is always possible to move in-game to a new shelter and start all over again with the same upgraded characters and a new pet (EG: Extended Family Quest). 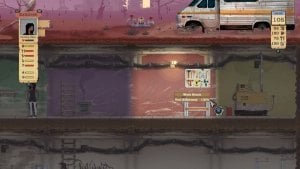 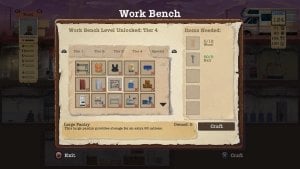 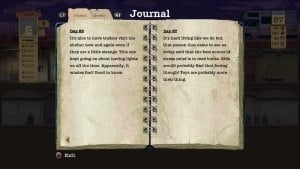 Sheltered has been constructed from the ground up to tug at the retro strings of gamers through its beautiful pixel art. Every aspect of the game, including the interface, icons, and colors, feel well designed by a team of gaming enthusiasts. Even the Playstation 4 controller layout, something that becomes instinctual to utilize, was clearly thought about before being finalized. The basic use of music and sound flow freely throughout the game and never feel overbearing. Somewhat repetitive, but comical dialogue helps to complete the post-apocalyptic theme. It feels like a complete package that delivers on its Kickstarter campaign promises.

At its core, Sheltered is extremely simple yet inherently addictive. It includes only the most necessary life-simulation control aspects and binds them in ways that feel creative and fun. Some aspects feel repetitive through grinding with enough randomness to keep it fresh. Daily exploration and crafting become the most addictive aspect of this quick pick-up-and-play game that remains just as entertaining in small doses as it is for longer gaming sessions.

Been playing for 2 days, its way better the Fallout shelther and since its not even P2W...
Reactions: T-hug and Abcdfv