It’s The Gliding for Sable; the coming-of-age event for the nomadic people of Midden. She gets to leave her clan, family and home in Ibex Camp to become a Glider. As she embarks on this transition to adulthood, Sable is tasked to collect masks in order to complete her Gliding; a task that will take her on a personal journey across the land. 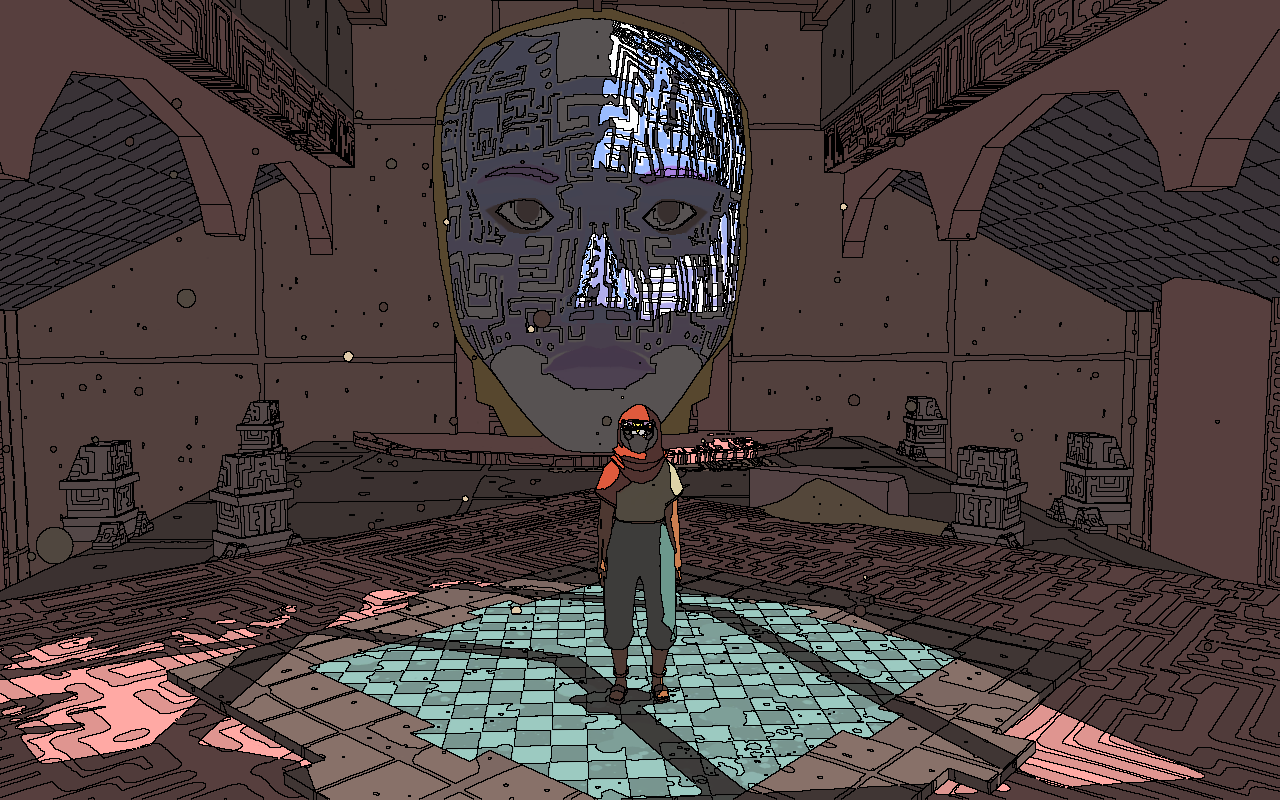 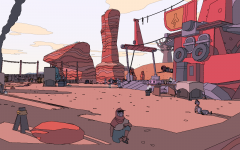 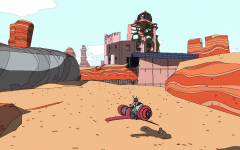 With exploration and puzzle-solving at the front and center of this title, Sable stands out by being completely devoid of combat. Despite its obvious lack of combat and the minimal challenge to exploration and puzzle solving, I did not mind it one bit. Tuned to the soothing tracks of indie artist Japanese Breakfast coupled with the beautiful cel-shaded environment, the atmospheric experience that Sable delivers feels almost meditative. The cel-shaded aesthetics are mesmerising as you explore Midden in an open-world fashion and discover ruins, scavenge parts off abandoned ships and interact with other nomadic clans.

To explore the world of Midden, Sable is equipped with some handy items. Before leaving her home at Ibex Camp, our protagonist is gifted a ‘Gliding Stone’ that enables her to channel Perpetual Energy and hover mid-air. She is also provided a customizable hoverbike, Simoon, to accompany her during her Gliding and cruise across the land. Sable is also able to climb and swim as she desires, with the limiting factor being her stamina gauge (for climbing). 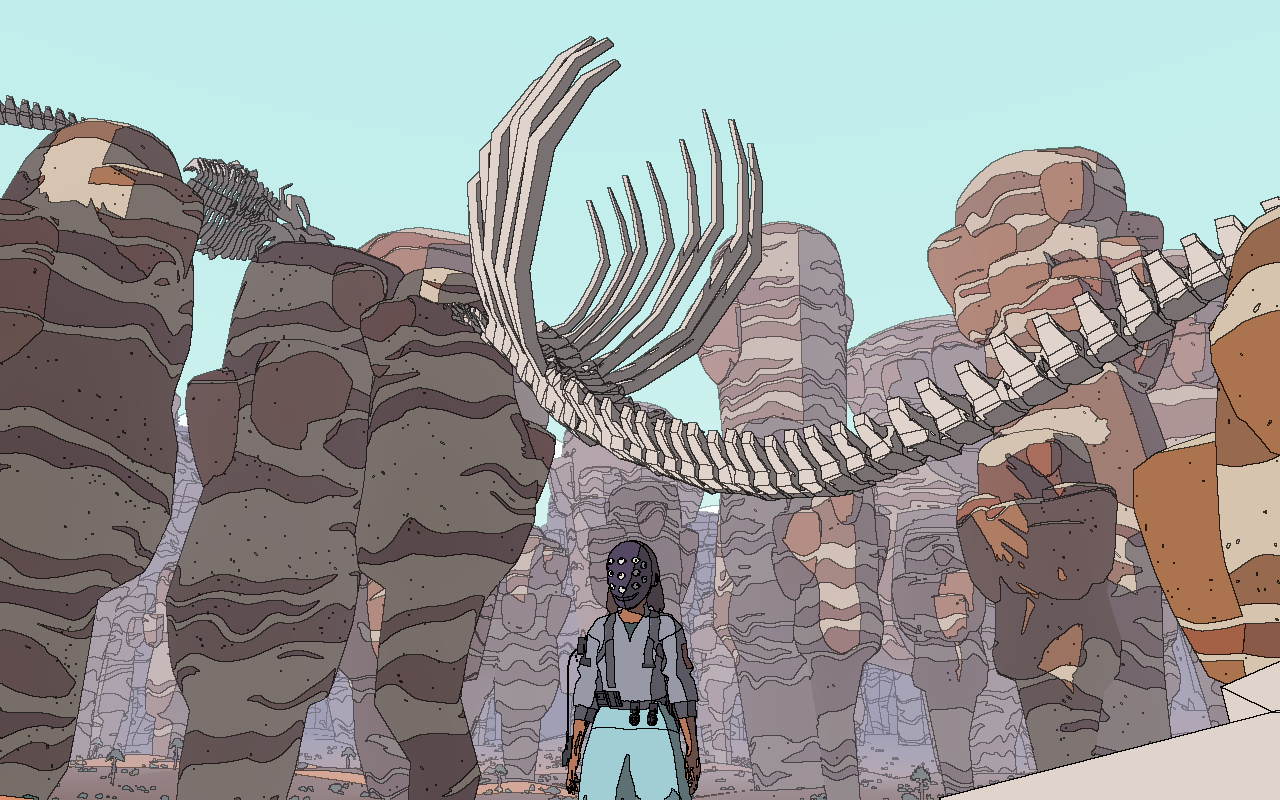 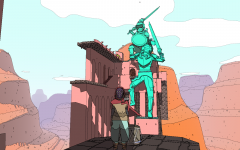 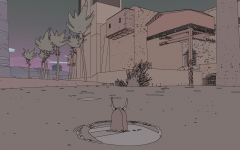 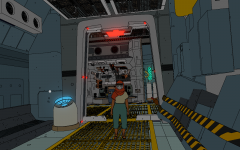 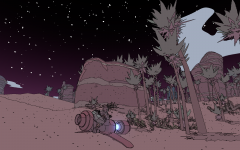 It will be easy to draw comparisons with Breath of the Wild given the free-roaming, free-climbing nature of the game, but Sable stands on its own thanks to its unique sci-fi alien world and original plot and puzzles. You get to learn more about Midden’s lore as you interact with fellow nomadic clans; which helps you also relate to the NPC and to Sable's journey. Masks that are required to be collected as part of Sable’s Gliding are obtained by completing quests NPCs send you on. In doing so, you will get to explore the areas beyond where you currently are and help you discover more of the land.

While most quests are fetch quests, they are nicely masked for the most part. Some are even quite memorable like taking the role of an urban legend to help a kid out or donning a detective hat to resolve the case of a city-wide power outage. Quests can also be completed in an open-ended fashion. Should you find beetles in exchange for the Atomic Calibrator for your hoverbike or steal it from the mischievous kid who put you through this ordeal in the first place? Should you bribe a guard with your hard-earned cash or find a merchant selling cheap pomegranates to bribe the pomegranate-hungry guard with? Such varying approaches make the way you can tackle quests more interesting and can even reward exploration as you interact with NPCs and learn more about them. 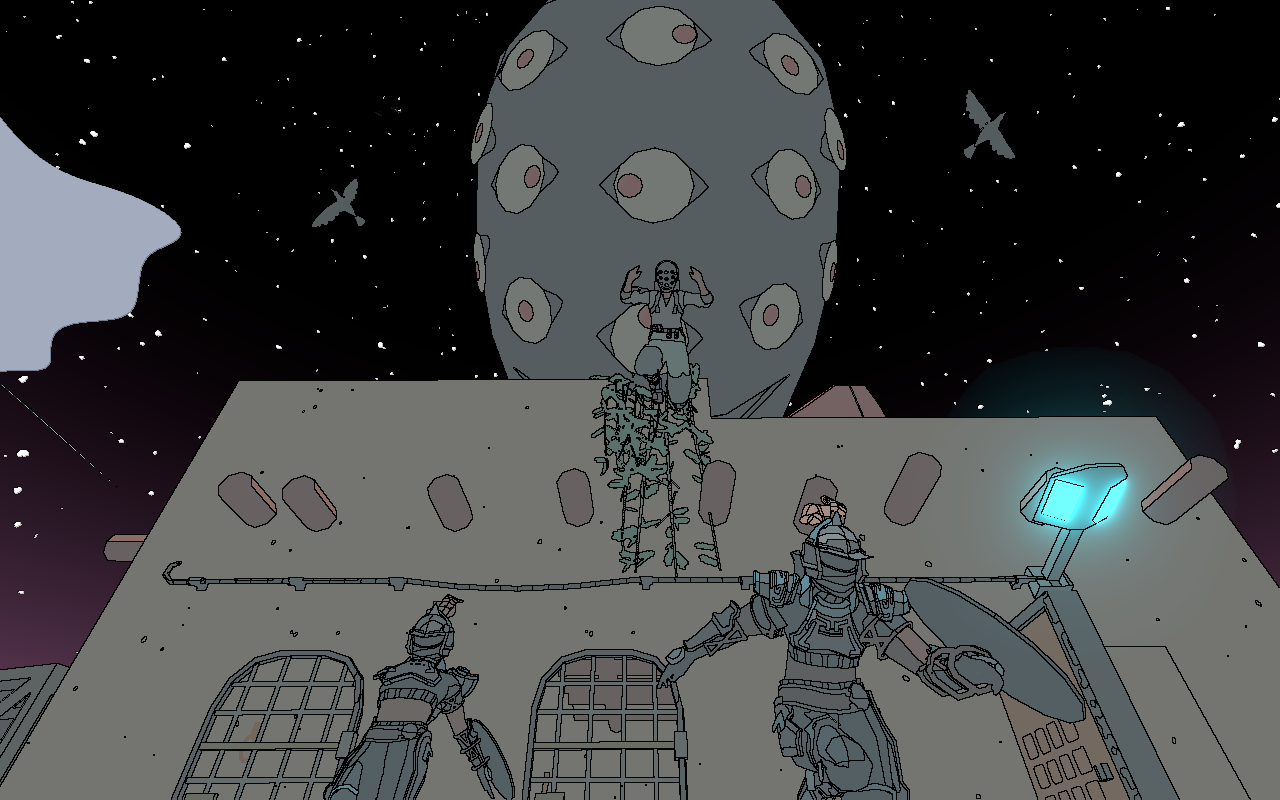 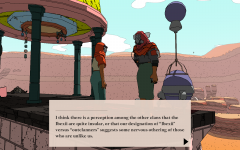 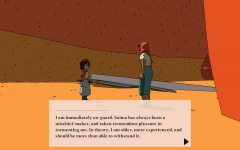 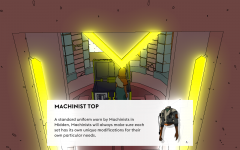 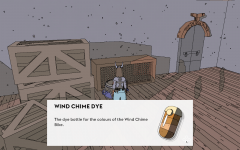 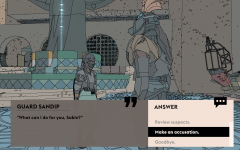 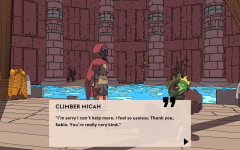 However, the amount of quests you get can easily lead you to forget intricacies that will help guide you to your next destination, since you might be offered one by an NPC you converse with while already engaged in an ongoing quest. This is what happened for me during The Shade Of Eccria quest, and I couldn't quite recall where to head to in order to find a required item. Talking to the NPC who gave me that quest did not tell me again where to head to.

In addition, while I did not mind the lack of combat, it is a noticeable feature; especially when some puzzles border the mundane threshold. Puzzles in general also don’t offer much of a challenge and when combat is lacking, a challenge in some form or the other might feel wanting.

Thankfully, Sable somewhat manages to even it out by being relatively short while tricking you into indulging in its captivating landscapes free for you to explore. You can even complete the main quest in around 7 hours without having explored the whole map. But the whole stress-free atmosphere and open world universe is so enticing that it’ll get you to explore the land of Midden some more after the credits roll.

All in all, Sable is a wholesome indie game that I wish anyone with a compatible system to try now or whenever they want a chilled game to take in.

What We Liked ...
What We Didn't Like ...
8
Gameplay
Despite being devoid of combat, exploration in Sable’s open world is well executed and its narrative-driven light puzzles help keep the intrigue going.
8
Presentation
Sable’s cel shaded aesthetics, soothing indie tunes, combat-free and free-roaming world make for a decidedly chilled game.
8
Lasting Appeal
While the game is not very long, the enticing universe of Midden will get you to explore the uncharted areas of the map even after completing the main quest.
8
out of 10

Devoid of the stress and grind that has become staples of most modern games, Sable reimagines what a fun, open world game can be and delivers with an original take.
Reactions: Xzi
Share:
Facebook Twitter Reddit Pinterest Tumblr WhatsApp Email Share Link
Sounds pretty chill. I sometimes just spent time in BoTW riding my horse around instead of fighting, so this could be a pretty nice game to burn away lazy afternoons with.

Always dig the heavily cel-shaded artstyle.
Reactions: Prans
The soundtrack... well, the song from the trailer, it sounds good. Chilling, yes.
I think I'll like this.
Beautiful aesthetic and the OST is very nice too. Now if only I could play it.... <,< - - - >.>(backlog looking at my shifty-like)
very interesting