Now that iOS 13 supports Xbox One and PS4 controllers, is there really still a market for MFi accessories? Can the Rotor Riot demonstrate a true point of difference that makes it essential?

MFi or "Made for iPhone/iPod/iPad" is a licencing agreement that allows developers to manufacture iDevice compatible hardware peripherals that operate with any of Apple's platforms. While limited, it made Apple products ultra-usable and injected an energy into Apple users' lives that they had never had before. Nowadays with the advent of iOS 13, Apple iDevices are finally compatible with Sony and Microsoft's seminal Bluetooth control pads, effectively rendering the majority of MFi peripherals useless. Retailing for the same equivalent price as a first-party console controller, the Rotor Riot RR1850 wired video game controller aims to bring console-quality peripherals to the iOS scene along with L3 and R3 compatibility and a wired, lag-free, experience. Rotor Riot is a collection of the most knowledgeable, talented and passionate mini quad-copter pilots from around the world who strive to educate, entertain, and inspire people through their culture-representative content. Let's find out how their latest device operates! 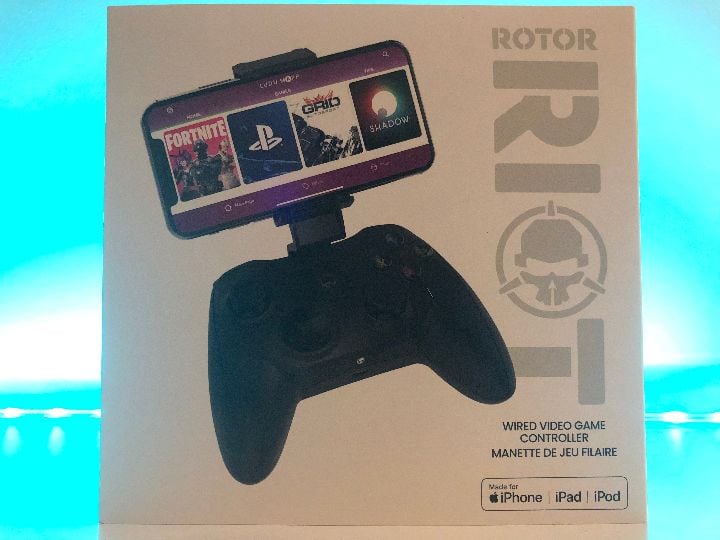 Upon opening this package I noticed how lightweight this item was. Usually and as referenced in Jurassic Park, if an item is heavy it's usually expensive, and therefore if it's lightweight it's normally associated with being of inferior design and not having that sturdy solid build quality you would want for your money; this is so not the case with the Rotor Riot. Even in the box, the thumbsticks are encapsulated in polystyrene rings, each component packed into its vacuum-formed compartment, and the cable tidied by a perfectly utilised velcro strap. In order to attach the mount to the pad, you have to unscrew a thumb bolt, line up the mounting plate, and re-screw it back down. It all feels like you're setting up some high-end camera equipment or a hitman's sniper rifle—the point being that it's satisfying and it conveys the overall construction quality of the gear in your hands. The lightweight design is purposeful, integral, and endearing to a product that is meaningfully designed to make it as "zero-impact" in your hands is it needs to be. The face buttons are suitably familiar with an Xbox aesthetic and colouration that makes it a breeze to pick up and play. There is also a concave D-Pad which reminds me of the Xbox One Elite controller, but overall the buttons feel light but responsive, and the bumpers and triggers feel great when giving them a squeeze. The clicky L3 and R3 buttons are a great addition to this controller, giving it yet more syn-biology with other bands of gamepads and blurring the lines between mobile gaming and console gaming. To the bottom of the device is a lightning connector to provide pass-through power to your mobile, and the built-in cable is an official-looking black Apple lightning connector which simply clips into your iPhone 5 or above (I have an iPhone 6S plus and an 8 plus for reference), and a pop-up immediately alerts you that this device would like your permission to be used on your iDevice. Being that this device is MFi certified it comes as no surprise that it is built using official Apple parts and that Apple devices can interface with it perfectly. Having said that, I think a silent interface without pop-ups would have been better. The red LED on the controller indicates that a connection is made by blinking and then turning solid once engaged; this is enough for me, no need to alert me on-screen too.

Ludu Mapp is the recommended application sidekick for this hardware, and initially, I thought it was going to be pretty handy in providing settings for the Riot and indicating when an update is available. To some extent, it is handy having a documented list of compatible applications centralised into one app, but it contains some oddities such as adverts for Amiibo and Riot accessories via Amazon and Walmart, as well as purchasable game guides for your iDevice. I'm not a huge fan of this companion app, it's non-invasive but it is unnecessarily bloated, which is perhaps terms of its very existence. Unlike its namesake, it does not allow you to map controls, which I found hugely disappointing; though to be fair even with a jailbroken device there does not seem to be a solid iOS solution for keymapping in existence. 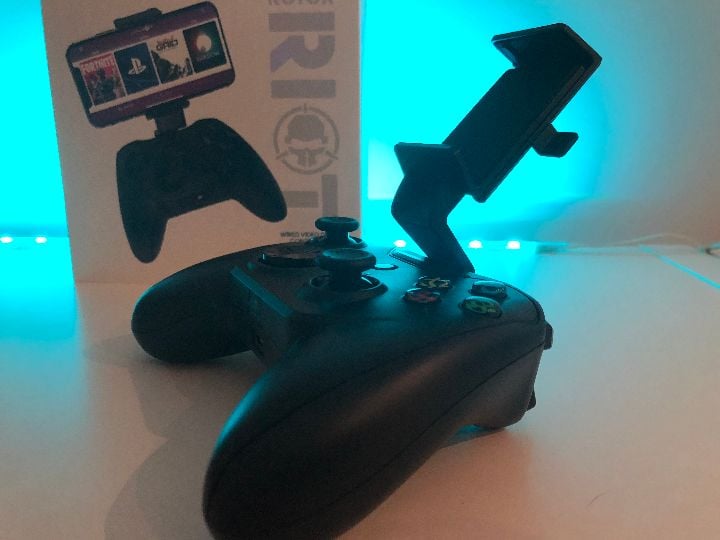 With the GameSir Peripherals I have tested in the past, I had a selection of apps installed ready to go, but for this test, I wanted to delve into something new, something I hadn't experienced yet. Ludu Mapp also alluded heavily to this game, so I definitely wanted to crack on and see how I would perform on Call of Duty Mobile. Upon firing it up I realised that the tutorial was purely built for touch screen and that the Rotor Riot would have to wait until that was completed. It only took a minute or two to step through the introductions and get into a game. Once in-game I immediately noticed how console-like this experience was. I could turn on a dime, flip between weapons and fire modes in the blink of an eye, and aiming felt immediately more pleasing than dragging my finger across the screen, obscuring my view of the play area and potentially covering something momentarily that I may have needed to witness in order to survive longer and score higher. Defensively I could strafe and back up on myself a lot faster than any of the fellow players on the server. I highly doubt any of them had any external gear connected to their phones while I was on their servers, as their movement and aiming proclivity was erratic at best and inaccurate for the majority of the time. In one instance I had run out of ammo and was running around rather blindly searching for guns and rounds or something to take the opposition down with. I came face to face with three of their players who couldn't hit the broad side of a barn with their assault rifles. It was embarrassing for them, and oddly enthralling for me. I felt like Neo from The Matrix, dodging a hail of bullets with ease by simply strafing to one side of the enemy, and circling around behind them to get a quick knife takedown in before they had even realised I had moved out of their contorted line of sight. Long story short, more often than not, I was MVP with the highest number of kills and the leanest kill to death ratio I have ever experienced in my life. I was a tooled up killing machine! Another great feature of this hardware is its ability to operate the PlayStation App, and therefore Remote Play. Apart from the obvious lag of the Remote Play interface the controller performed admirably in covering the majority of the buttons, sans the PS button, and allowing me to play every game I have installed adequately. If I were to use a PS4 DualShock on my iPhone via iOS 13 to play Remote Play, I would have also had to purchase a vice-like grip mount to make it a comfortable experience; the Rotor Riot V2 has this covered, the viewing angle is super comfortable and it doesn't bend, wobble, or deform under the weight of your phone. 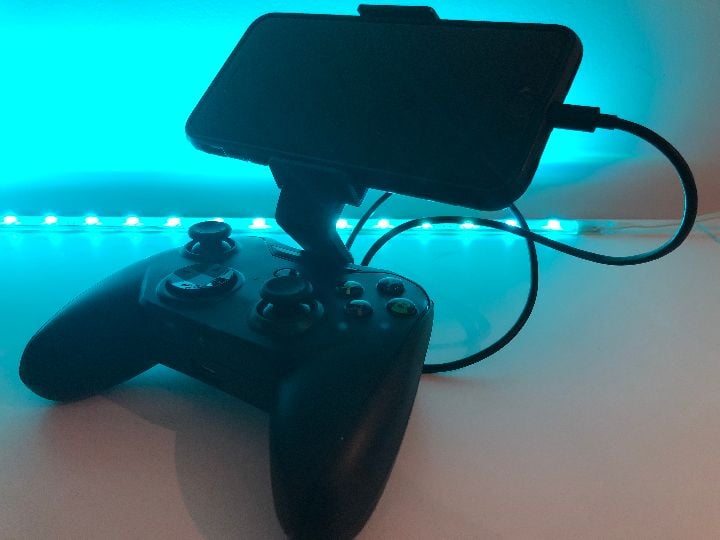 I noted two main bones of contention I hold with this device. Firstly that I could not set this unit down comfortably whilst taking a break for a minute or two, the device with my phone attached simply doesn't stand up by itself. Instead, it rolls back onto the clamp and sits awkwardly on the counter waiting for you to resume. All it would take is slightly more curved or extended L2/R2 buttons to make this right, and the entire unit would sit perfectly. This could be due to the weight of my plus model iDevices but it seems to be a very strange design flaw that could have been easily rectified and made suitable for all devices within the clamp's ability to stretch out and hold them. My second issue is the lack of supplied key mapping software. On Android, I used to use Octopus to interface between touches on the screen and buttons pressed on a physical controller⁠. It was simple to use⁠—take a screenshot, place buttons on the areas you want them to correlate with, and enable the layout in-game. Nothing like this exists for iPhone in the non-jailbroken world, except for G-Crux by GameSir, who use hybrid controller/screen configurations and allow for touches to be mapped to their wireless devices. Why Rotor haven't implemented this is beyond me, it is a huge omission for such a great piece of hardware, and it really seems like an open goal that has been missed terribly. Perhaps it is due to the MFi certification, the wired input method, or just plain oversight, but if there is a way to do this, I couldn't find it in time to complete this review. It also would have been great to swap buttons, create macros, and customise my set up exactly how I wanted to, depending on what game I was playing at the time.

Overall I really like this device even if it is a little too specialised in its design choices for its own good. It could have been universal for Android and iPhone, it could have been Bluetooth rather than wired, it could have come bundled with more useful key mapping software, but instead, it chose to be a slick iPhone-centric MFi controller which outstrips the majority of third-party controllers, especially with the superb "door-busting" £49.99 price tag. It's tough to say that this is the best device I have used when there are so many less limited options available now, but this was admittedly released prior to iOS 13's additional controller support. Despite this, the Rotor Riot is certainly up there with the best of them and definitely has potential to be more than this, should the developers build a third iteration upon the given constructive critique. 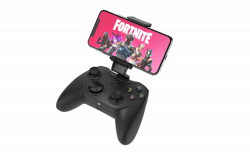