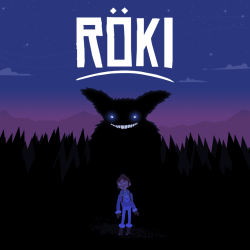 Single player
Local Multiplayer
Online Multiplayer
Co-operative
Through a point-and-click mechanic, Röki recounts the coming-of-age tale of Tove as she explores a fantastical world based on Scandinavian folklore. But don’t be deceived by its cute aesthetics as this fairytale-like story deals with darker and heavier themes than what meets the eye. Should you join the adventure?

Among the first games I played were the classic point-and-click MS-DOS Monkey Island titles. These were rather humorous, and even sequels like the recent Beyond a Steel Sky adopted a similar approach to the narrative. Röki, however, does things a little differently as a contemporary point-and-click game.

Its story, despite being set in a fantastical world inspired by Scandinavian folklore, tells a more emotional story that deals with themes of grievance, family bonds and perseverance. You play as Tove, a young girl whose life takes a 180° turn the night she and her brother Lars are separated from their father.To top it off, Lars is abducted by an other-worldly creature (whom we later learn to be the titular Röki).

Determined to save him, Tove sets out to find clues as to where Lars might have gone. On this quest, she comes across folkloric beings from the Yule Cat through helper elves to friendly trolls (sounds like an oxymoron but trust me, you’ll get it if you play the game) from whom she will seek help and engage in other quests for. 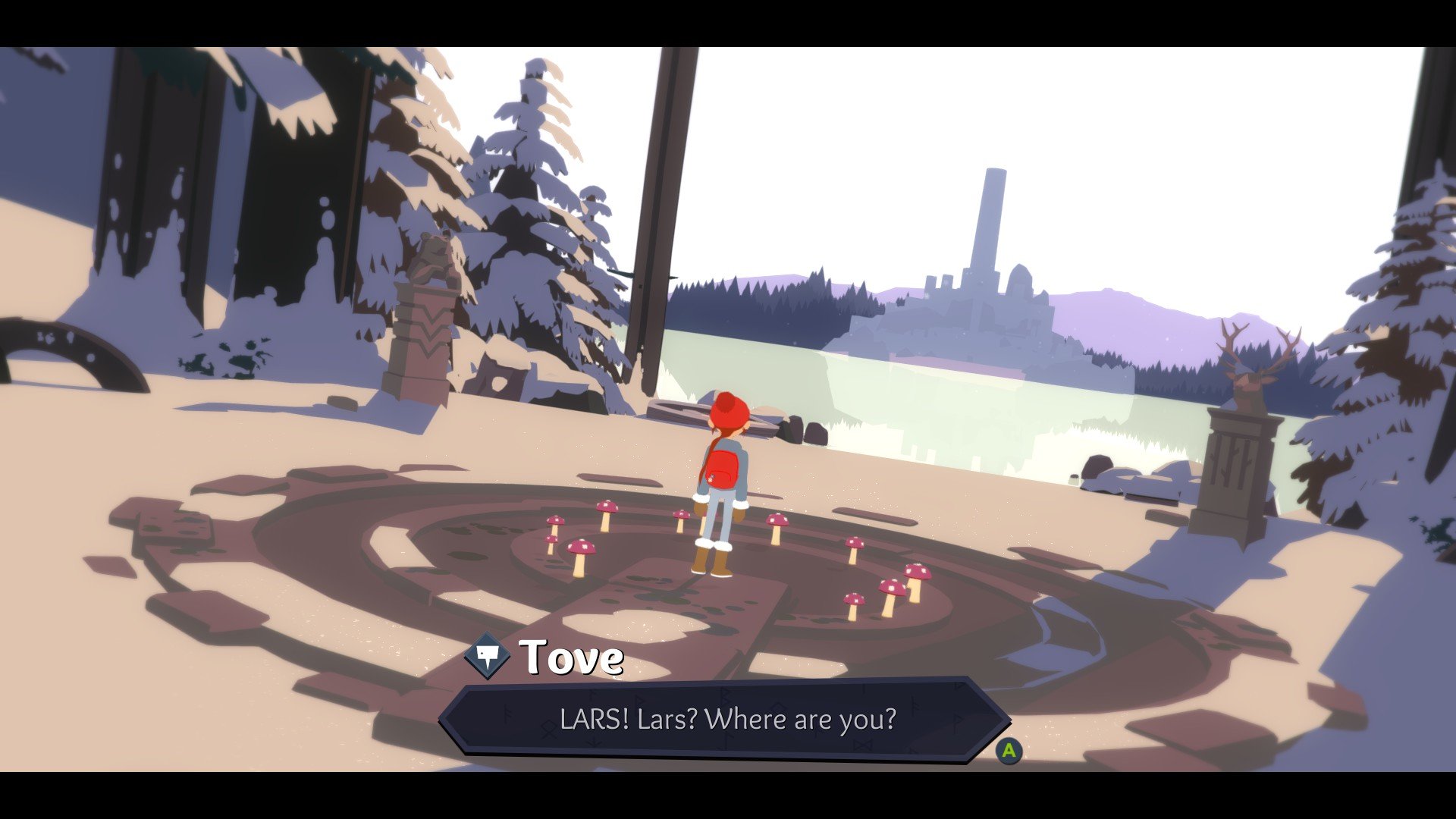 This original, touching coming-of-age story plays out by way of solving puzzles with a point-and-click mechanic. With the latter, finding clues traditionally consisted of carefully scrutinizing (or more accurately: clicking) every inch of the scene to find interactive elements. Röki improves on this stale mechanic by allowing you to highlight the interactive elements on the screen by pressing on the L-stick. Additionally, if you use the correct items while attempting to solve a puzzle, a jingle will sound to inform you that you did well and will progress.

Despite these being simple additions, I found them to be particularly helpful as oftentimes in point-and-click games I’d be stuck with certain items and have to look closer before piecing everything together. These small features really makes the experience more approachable. 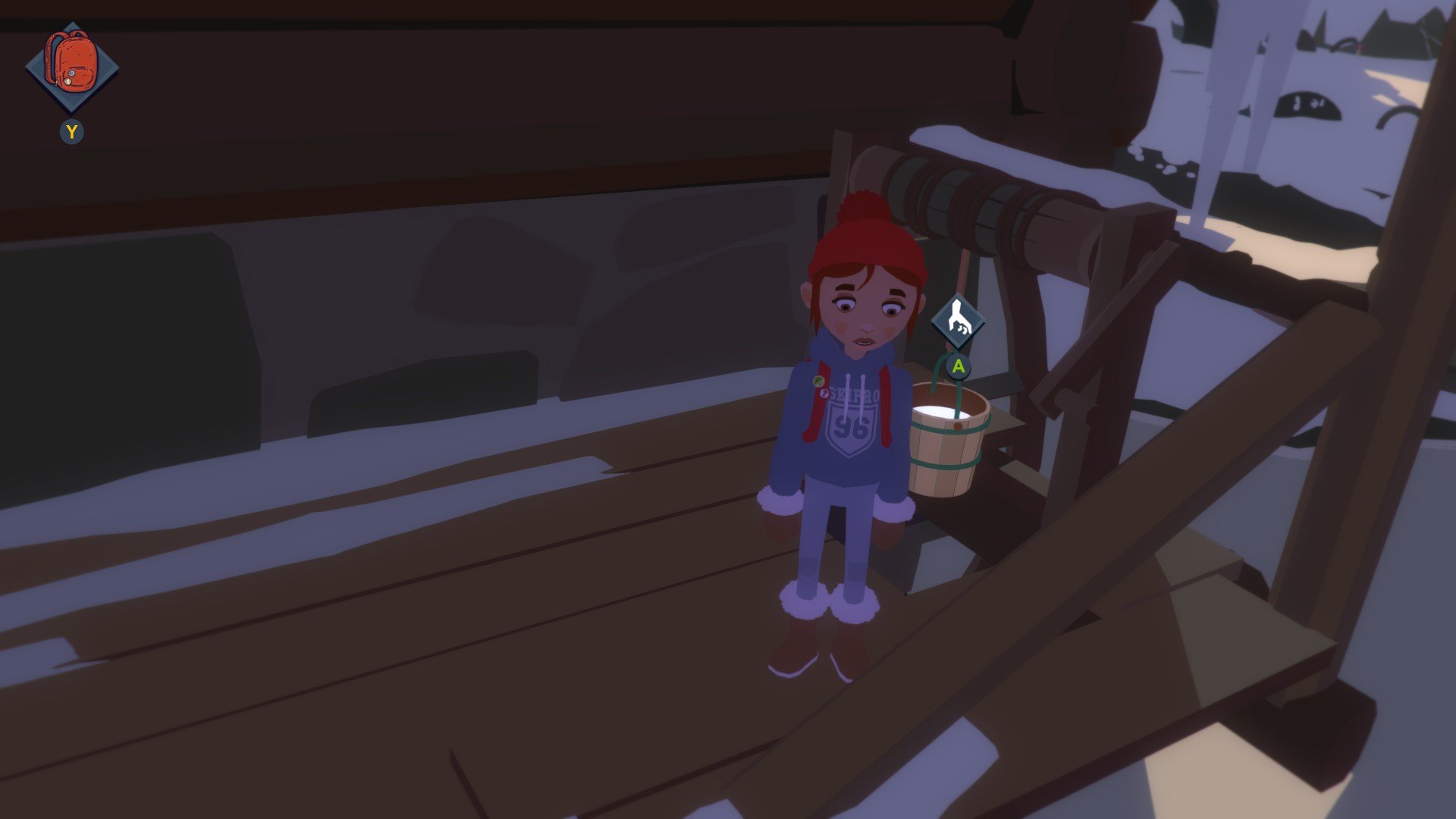 However, even with an original plot and tiny, yet noteworthy additions to its point-and-click mechanic, Röki can be an intimidating game despite its appealing, cutesy look. That’s because the solutions to the puzzles aren’t the most intuitive. Most puzzles will require using items you collected while exploring and sometimes combining them into a mandatory artefact. Successfully finding these combinations all too often require trial-and-error and there’s as much fun to be had in that as you might imagine.

Take for example that at one point, you’ll have to use a bone as a torch’s handle. It’s fine to need some out-of-the-box thinking to puzzle-solving but in context, it feels odd. That’s because you’ve been trekking in a forest for a significant chunk of the game upto this puzzle and a tree branch would be a more obvious item to use as a torch. Another one is when I had to use a lobster cage to catch a frog-like creature from a lake with no real relation or clues given between the two. Again not very intuitive but the game is unfortunately filled with such instances. 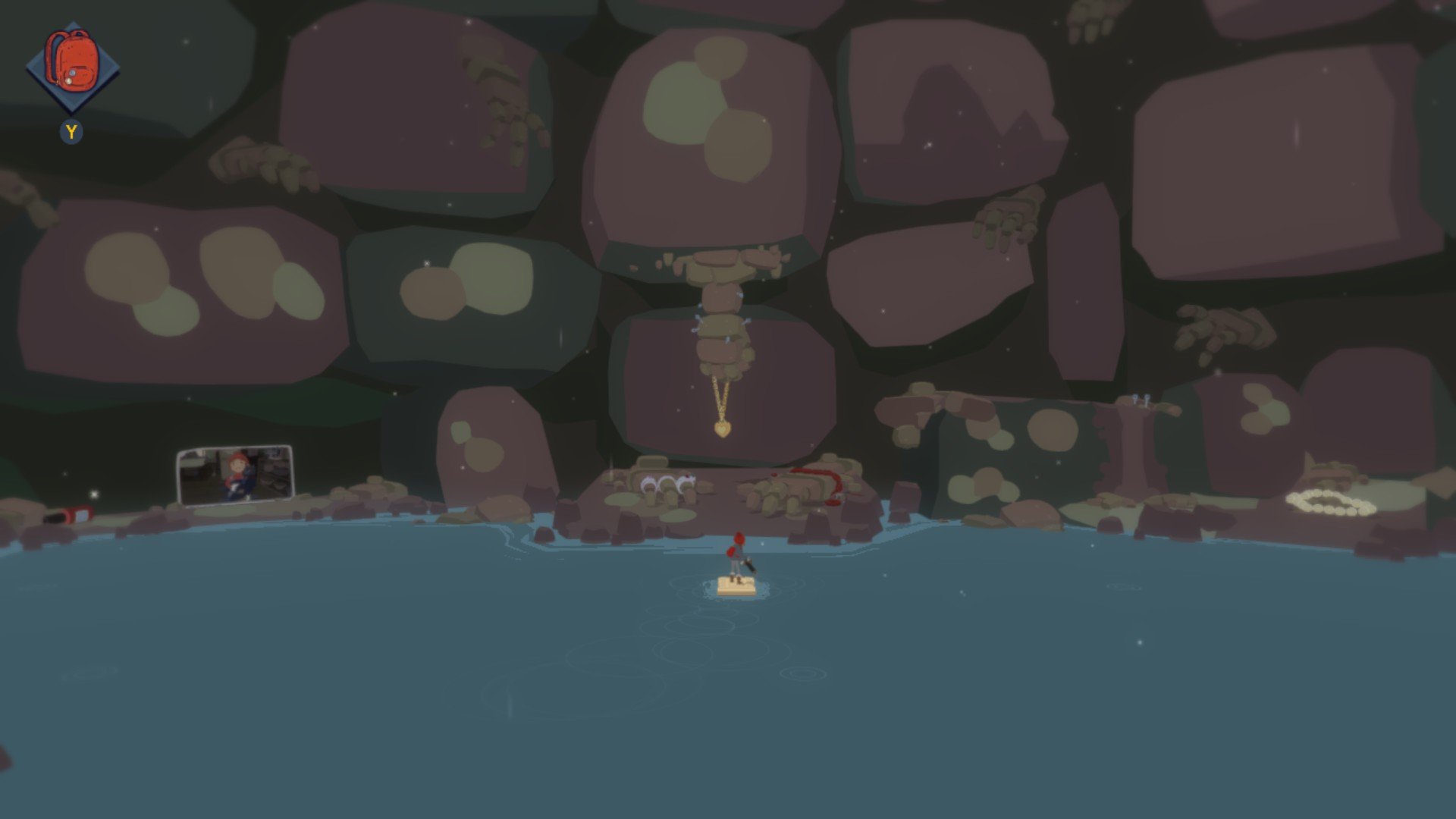 Further complicating things is the game’s open-ended exploration. After the first few hours, you can freely choose where to explore next. While it’s a welcome change to the genre, it complicates things as you will get more puzzles thrown at you and not all solutions to a puzzle will be found in the same scene. You will have to explore several scenes and uncover several items and come back to an earlier point in order to solve a roadblock. This also means that there is a lot of backtracking involved which gets stale, despite the presence of a fast travel system.

Further backtracking might be needed to find an item you might have missed from the numerous small ones littered in far off places. One can easily get lost when engaged in several puzzles at once, especially given that they aren’t so straightforward to solve. In this way, the open-ended aspect plays against the game.

Additionally, its UI could use some improvement. Whatever you find is collected in Tove’s backpack and to access it, you will have to open the backpack and drag the item to the location on the scene you wish to use it on. If you miss, you will have to repeat the process. For quests that require using multiple items (and there’s a lot of those), you will have to select individual items through the same process. While it’s a minor inconvenience compared to the aforementioned setbacks, it’s noticeable since you will be going through Tove’s backpack throughout the game and repeat the process ad nauseum. Also, with all the backtracking and non-linear exploration involved, you might expect a map to guide you around but alas, a map isn't a feature of Röki. 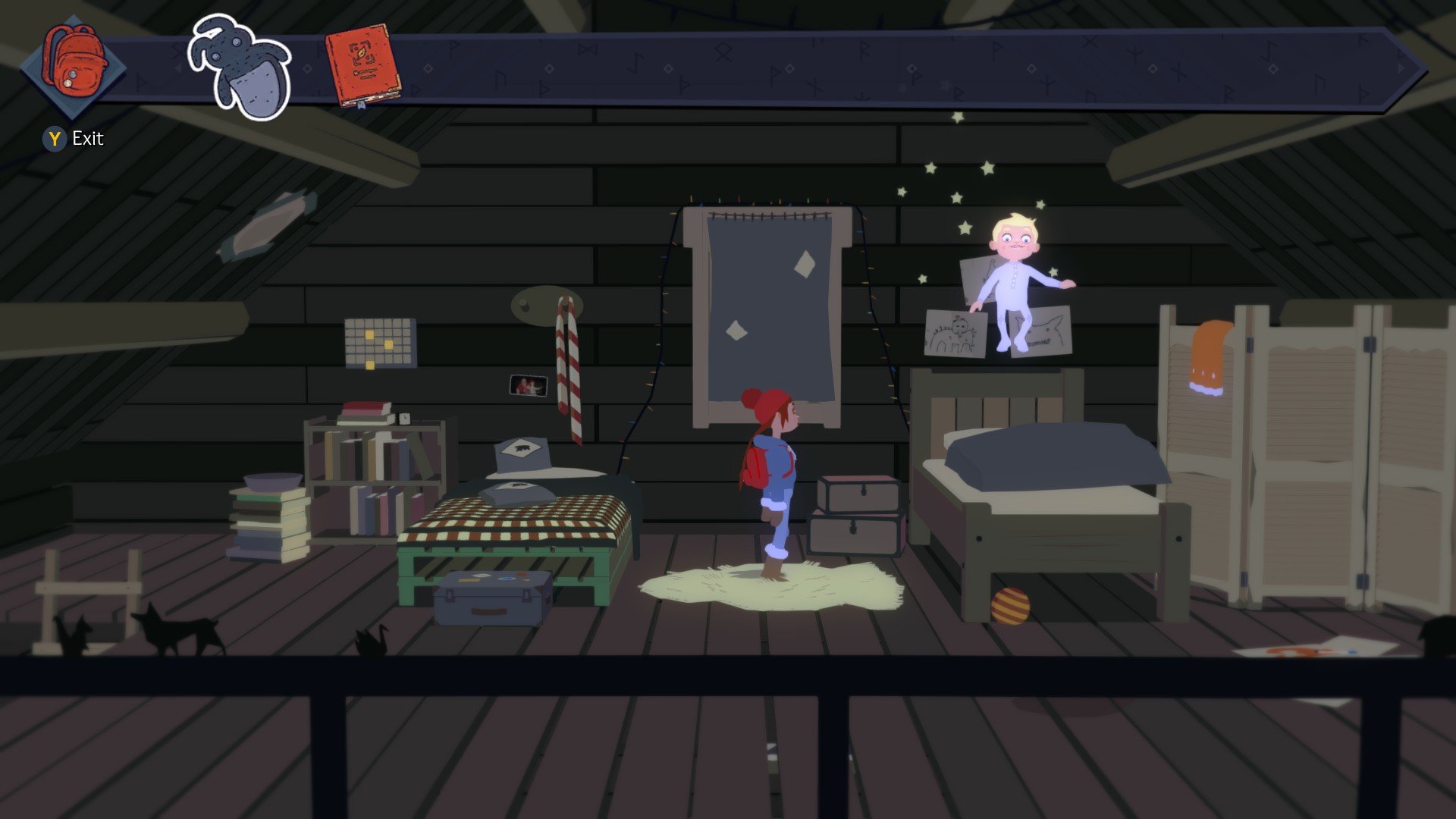 It’s a shame that the gameplay holds down what is otherwise an original and visually attractive game. From Tove’s home through a snowy forest to an abandoned castle, Röki’s environment design and graphics made me feel as if I’m playing a fairytale book. Unfortunately, the gameplay was not as enticing as the game’s look. The only thing that compelled me to stick around and finish the game was the plot which I wanted to see unfold and learn about the main cast’s future. It felt satisfying but not really worthwhile of what it took me to get there. 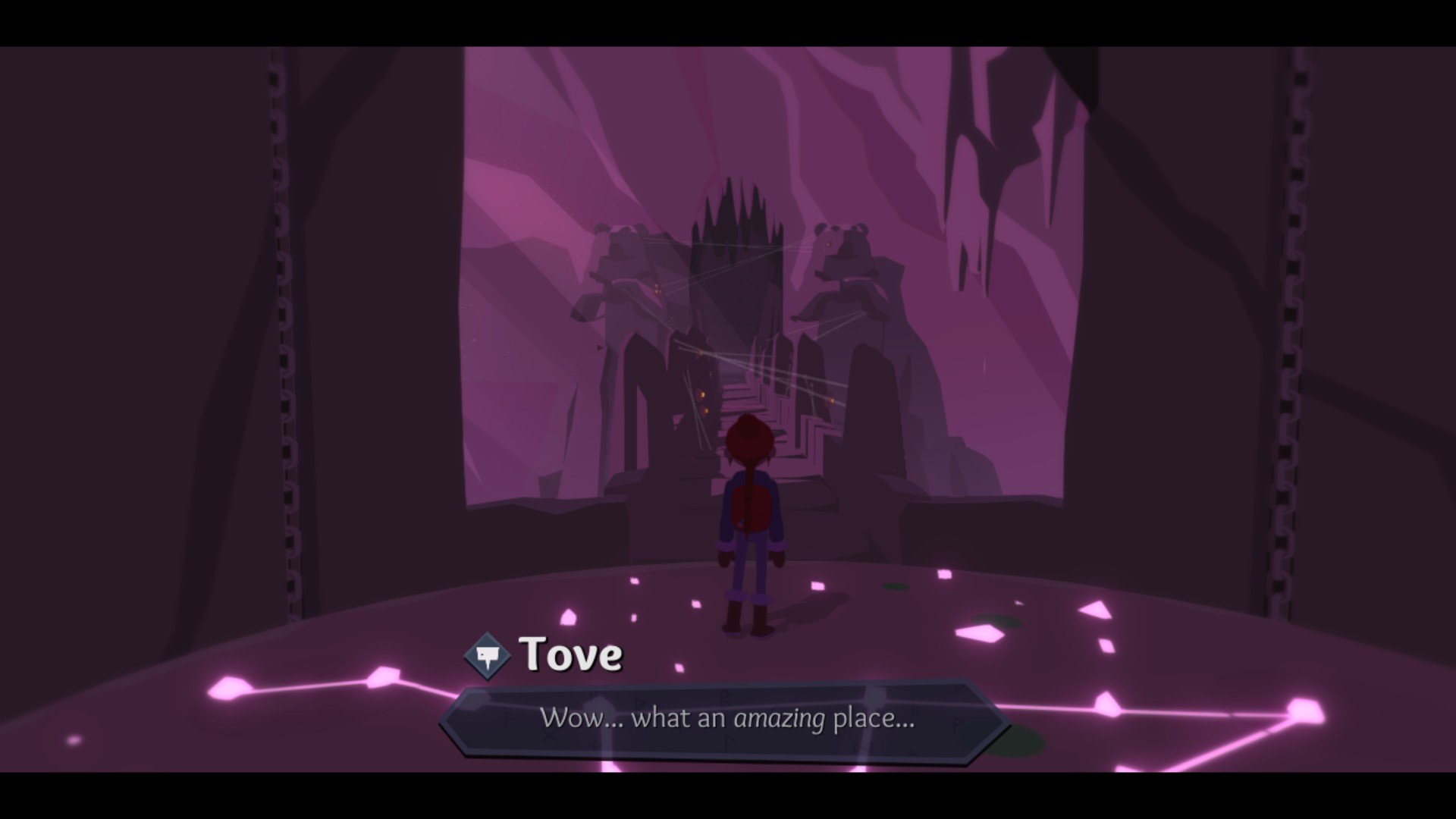 What We Liked ...
What We Didn't Like ...
6
Gameplay
Despite some helpful features uncommon to the genre, solving puzzles very often aren’t intuitive and can get off-putting.
8
Presentation
The deceptively cutesy designs and depiction of the folkloric landscapes emulate the feeling of an interactive fairytale book.
6
Lasting Appeal
The plot was compelling enough for me to complete my playthrough despite the gameplay’s setbacks but I can’t guarantee a similar engagement for other players.
6.5
out of 10

Reactions: hippy dave and GABO1423
Hey, my name is Roki Balboa.
Reactions: Torina and Prans
So, does that mean that Totoro was the angel of death after all ?
This game looks nice, I would gladly dive in, thanks for the test.