A brand known for their vast assortment of gaming goodies, we check out Roccat's Vulcan 120 AIMO to see what it brings to the crowded gaming keyboard market.

Out of the box, the first thing that hits you is the anodized aluminium plate sitting beneath the keys. Similar to the BlackWidow Elite, keys sit atop this plate, allowing for easy cleaning and degunking, but a pleasant difference is the lip bordering the keyboard. Though this less streamlined design obviously takes up more space, it allows you to better appreciate the build quality and overall design. It isn't bulky to the point of it being in the way or irritating, it's just right in showing off what it needs to. 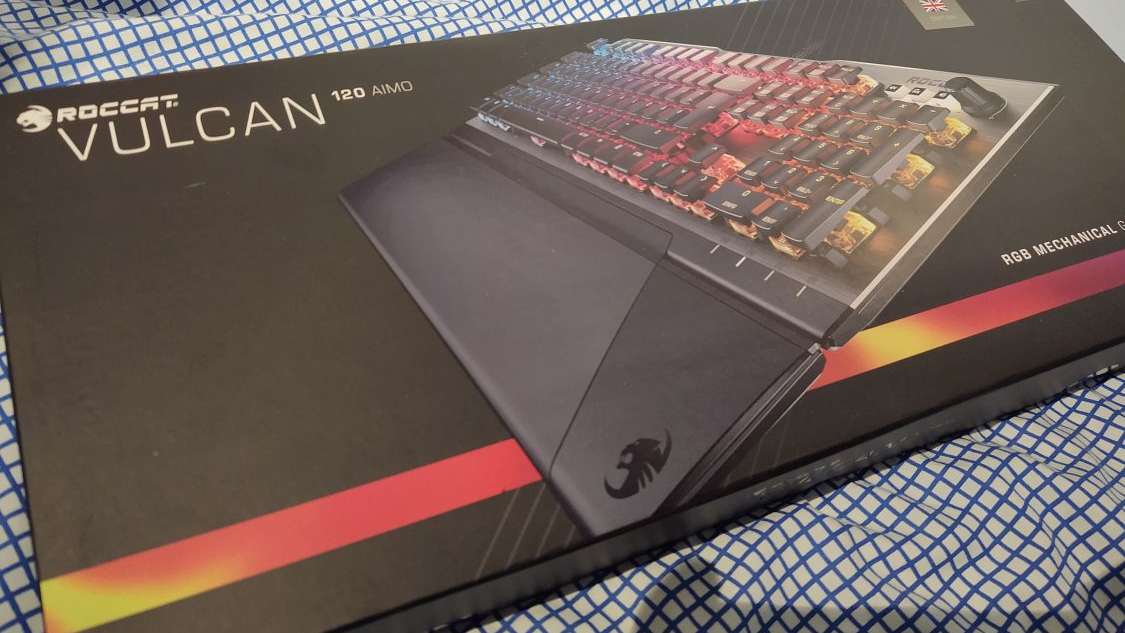 A stylish box to match a stylish keyboard.

Looking at the keys themselves, you have a largely standard assortment. The key font is bold and somewhat wide for the RGB lighting to pleasantly shine through, looking great plugged in. I always appreciate a gaming keyboard without any kind of obnoxious 'gaming fonts', and Roccat's design here really sits well with me. Another favourable choice comes in the decision to include a remappable volume dial in the upper right corner. What I really like here is that by default, it has two uses: changing the RGB brightness, and altering your system's volume. Switching between these options can be done by hitting the respective tactile button. It's a bit of a shame these buttons don't have a more general icon with them being customisable in use, but when you're more than likely to keep them at their default setting it's far less of an issue.

The switches on offer are, for better or worse, Roccat's proprietary brand going by the name of Titan. Boasting a 'tactile and silent 1.8mm actuation point with a 3.6mm travel distance', I'll leave judging the technical ramifications to those better understanding of them. Comparing this to my experience with Razer's Greens and Yellows (Blues and Reds by non-proprietary standards) however, the typing experience falls somewhere in between. I'm not finding keys hit at a feather drop as I did with the BlackWidow Elite, instead having a tactile bump to them. It's satisfying in a way both familiar and really quite different; I like it, but it's hard to get a real feel as to what makes it so nice to be typing on. 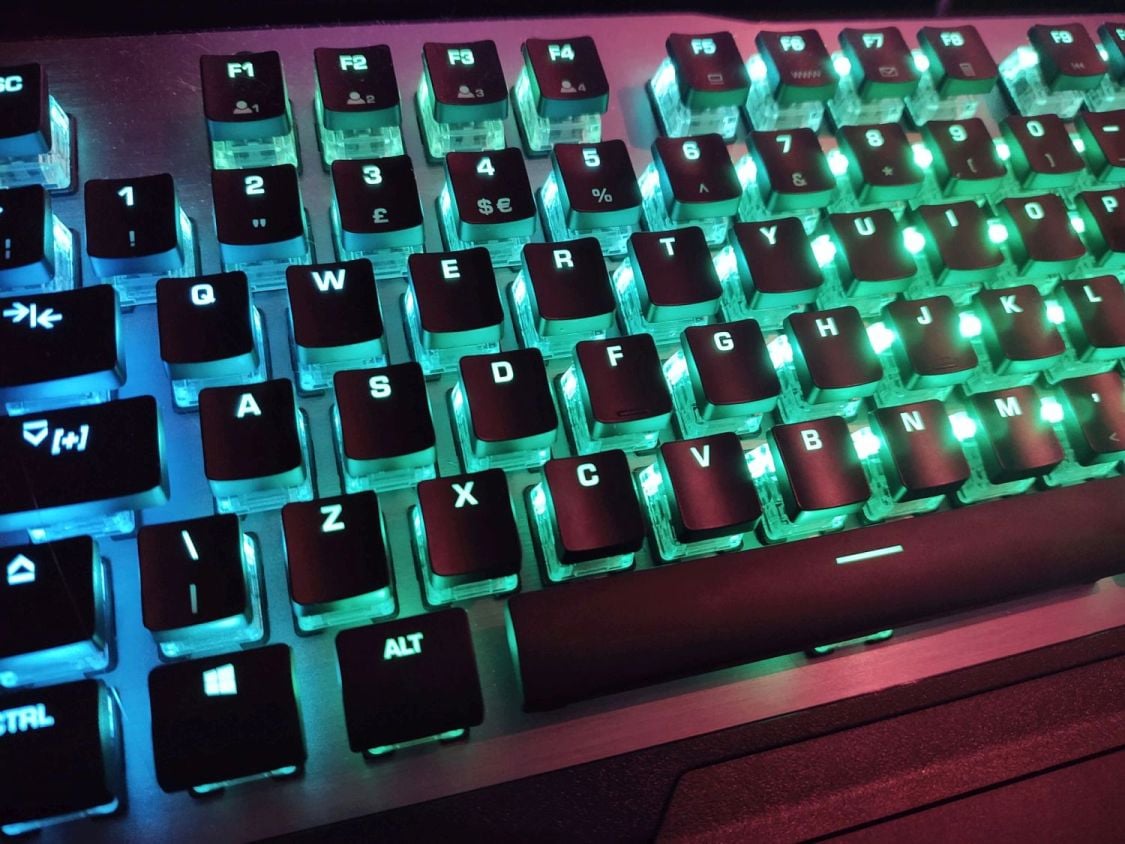 Without a doubt, my favourite thing about this keyboard is its lighting. RGB lights are a staple of any flashy gaming keyboard, but it's in this keyboard's unusual keycap design it really stands out. Because the slim caps only cover the tops of the keys, you find the colours blending magnificently in a way I simply haven't seen in other keyboards. Despite each key only having a single light behind it displaying one solid colour at a time, you have a sense of gradience as the keys flicker and dance. Of course, to make the most of this stunning lighting, you'll be relying on Roccat's special 'Swarm' software, an app I have mixed opinions of.

Having only used Razer's offerings in the past, I've become accustom to clean and easy to use software. With Razer, everything makes sense out of the box in an incredibly intuitive way; Swarm is a bit of a mixed bag in this sense. Opening the software for the first time, I'm hit with the fact Swarm doesn't take note of Windows scaling options. With my laptop screen being 3200x1800, I have scaling set to 200%, and every app I can think of takes note of this. It's minor and something incredibly unlikely to affect most people, but it set a president with the software as a whole. Comparing it to Razer's Synapse, there's a lot to take in. You have profiles, key assignment, a macro creator, the lighting settings, and a few miscellaneous options to play with. It's a lot. Spending some time with the software, things start to become clearer, if not still a little cluttered. 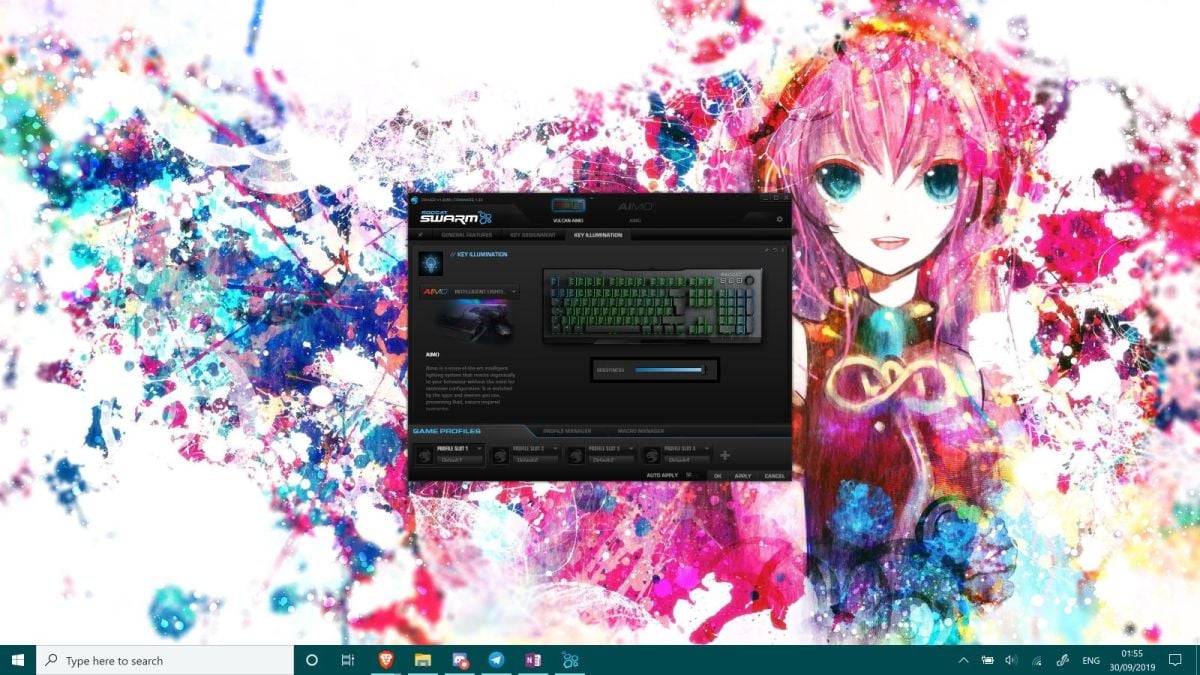 Definitely not the clearest software to use.

When it comes to functionality, Swarm falls back on two pillars: Game Mode, and Easy-Shift. Game Mode is something you've likely seen before in similar gaming keyboards, disabling the windows key to avoid your current game getting minimised at a crucial time, a generally-accepted good ideas all in all. What Roccat have done to try to add to this is allowing you to rebind keys when this is active, as well as the fancily-branded Easy-Shift. Key binding is exactly what you'd expect. You can swap keys, or have any number of keys being mapped to the same character. If you were in a game where you need to mash a single key, it could be handy to set every one available to that. In a far more normal use case of wanting to make use of the function keys that line the top of the board, you could remap them to things like Insert or Home to maximise available keys on the left side of the keyboard. It's generally not something I used, but with no clear way of remapping keys normally, I could perhaps see use in this for people wanting to switch their key caps for the DVORAK layout or something similar.

At its core, Easy-Shift gives each key additional functionality while a designated Easy-Shift key is held while in Game Mode. By default, this key is caps lock, sitting just above your normal left shift. Holding this down, your keyboard is swept in a white light, and hit keys will perform their Easy-Shift function, this able to be pre-made macros, opening applications, multimedia controls, and your other general utility functionality. As an idea, it's difficult to fault, but the implementation is needlessly limiting. The fact these macros and extras are locked behind having Game Mode currently enabled adds a layer of tedium when it comes to general use. Compare this to Razer's BlackWidow Elite being able to add this kind of functionality via the function key at all times, and I'm just left wondering why Roccat can't match this. 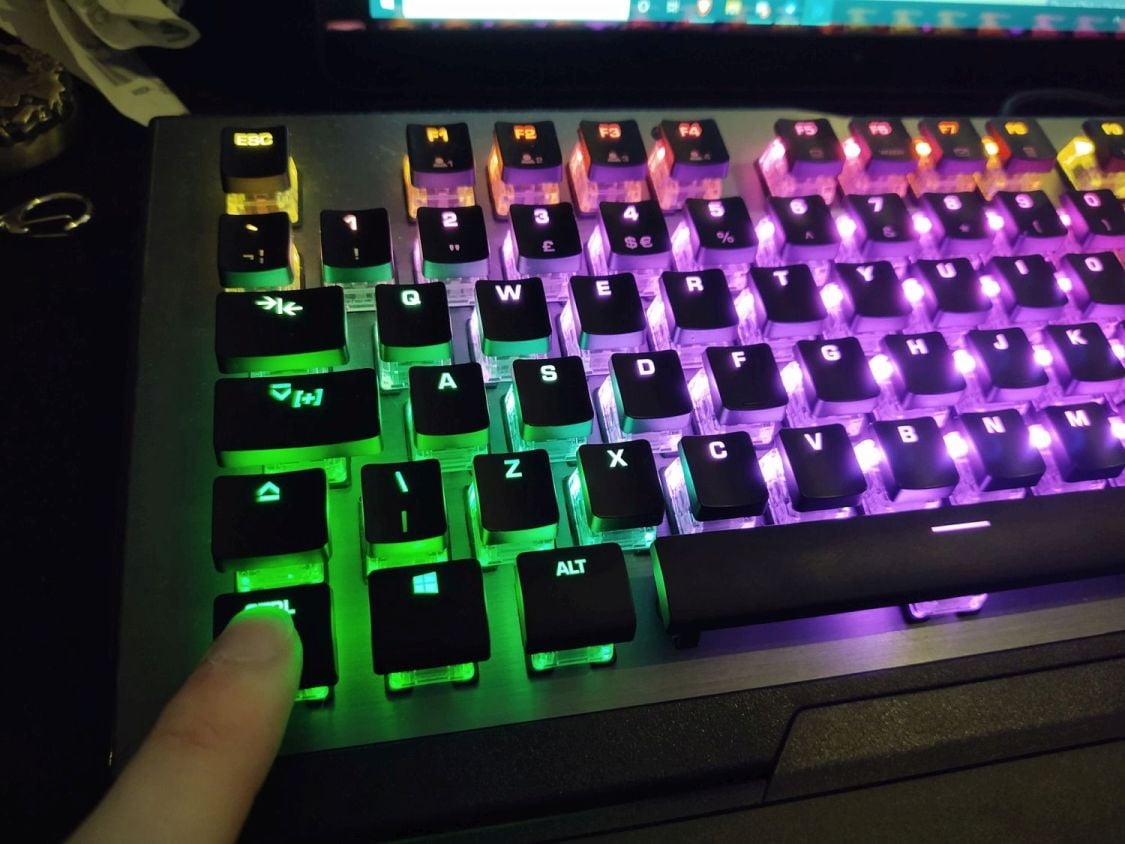 The intelligent lighting in action!

Of the features on offer, the standout hit for me is the AIMO Intelligent Lighting System. Where I'd take the time to get a visually appealing set of static lights (a little boring, sure) on my previous keyboards, this captivated me in a way where I really didn't want anything else. At first glance, the lights seem to shift and sway as if at random, transitioning fluidly from one colour to the next across the keyboard. As you hit a key, it reactively changes colour. If you hold a key or hit keys close to each other, the surrounding area also lights up. It's difficult to put across in words what makes this so enticing but it's my far the nicest setting I've seen on this kind of keyboard. Naturally, all of this isn't without fault. 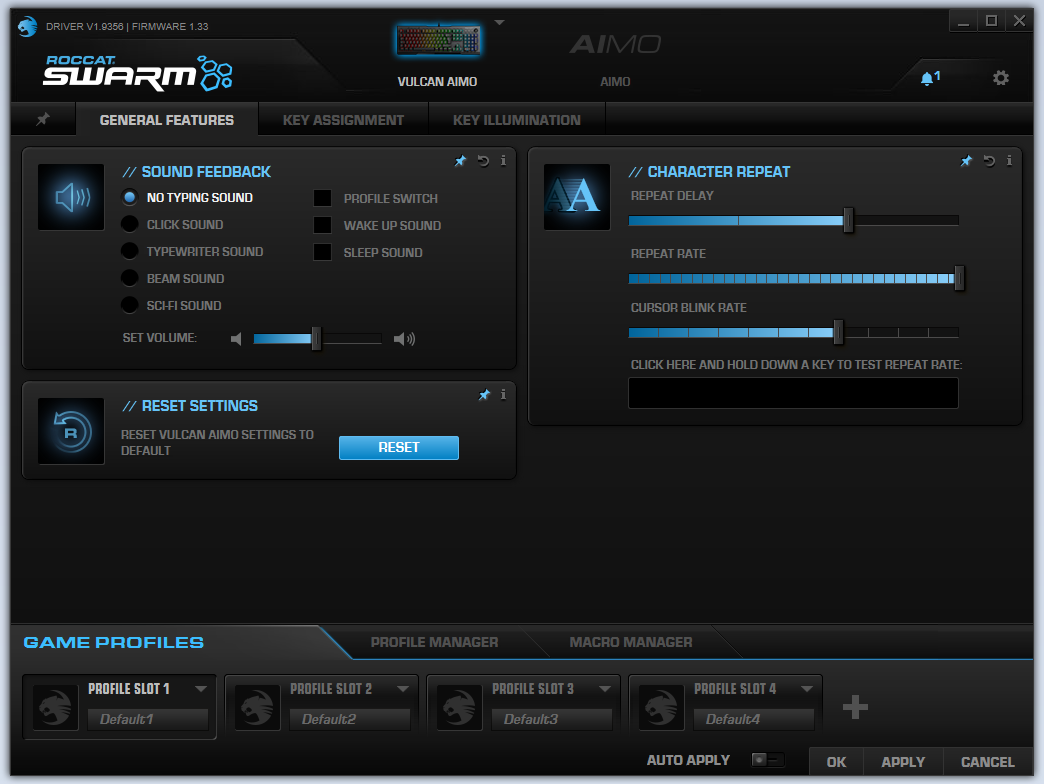 An overview of Swarm via screenshots.

The caveat in this case comes from the fact Swarm likes to crash. Without cause, reason, or rhyme, it closes. It does so silently in the background, making no fuss, and leaving the keyboard confused as to what it should be doing with its lights, often simply freezing with its current setup. On top of this, it doesn't seem to launch at startup despite being set to, and clearly being in my startup options. The software freezing doesn't impede the core functionality of the keyboard by any means; you can still type, you can still adjust your volume, all that good stuff, but you lose a lot of what really makes the Vulcan 120 AIMO stand out. As an odd aside, one thing that does remain with the software crashed or closed is your game mode setup, so if you want to swap your WASD with your arrow keys for that older generation of Command and Conquer that doesn't let you remap keys, you can do so safe with the knowledge you won't be interrupted mid-game.

All things considered, whether this keyboard is for you isn't such a simple thing to ascertain. From what I know, Roccat are a fairly good brand and I do have some hope the software will improve in time, but with anything of this nature there simply is no guarantee. There's also a chance these issues are exclusive to my PC, as slim as that may be. If you're after a well-built keyboard with a clean and aesthetically pleasing design, the Vulcan 120 AIMO ticks every box. For everything beyond that, it's a case of hoping for a fix, and at £149.99, that just might not be good enough for most.

You can find out more over at Roccat's official product page, or check out the tech specs below: 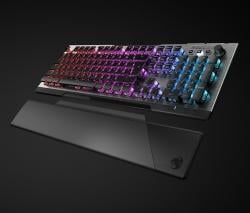