Having previously enjoyed ROCCAT's keyboard offerings, I get hands-on with the Kain 200 AIMO to see if their mice can hold their own.

Roccat are a brand devoted to delivering interesting and often proprietary approaches to gaming accessories. From keyboards to headsets, stands to mice, they have a great range of products each tailored to fill a niche, and please an audience. Having previously reviewed their Vulkan 120 AIMO keyboard, I know they deliver quality, albeit at a steep price. Does the Kain manage to reach the same heights?

What's in the Box?

Sleek and clean, the box puts forward a professional and high quality aesthetic. Housing the mouse itself, as well as a Micro USB cable, a wireless dongle, and a USB extension, you have everything you need to jump straight in without any unnecessary clutter. The mouse has a lovely matted feel to it, and housing its RGB lighting only in the Roccat logo and on the mouse wheel, it isn't as in your face as other gaming mice sometimes are. Immediately though, there is a caveat: this is an exclusively right-handed mouse. Though the lefties among us can often work around mice with buttons on one side by simply forgoing them, Roccat went further in an attempt to delivery an ergonomically sound design, and while I do think they did a great job, I can't help but feel sad for those it doesn't cater for. Unlike the ambidextrous mice out there, the Kain features a slanted body, the left click higher than the right to assumedly support the curved nature of a resting hand. Holding it with my left hand, it feels as though my grip extends too far. I wouldn't call it uncomfortable, but I'd say there are most certainly better experiences out there. With my right hand however, it is a joy.

The Kain has everything you'd expect of a modern gaming mouse, albeit a little light on your fun configurable buttons. You have your left and right mouse clicks, the middle wheel, the forward and back buttons on the side, and a DPI button that can be configured via Roccat's Swarm software, but more on that later. One thing I really would like to draw attention to with the design is almost not the mouse itself, but the port for the Micro USB cable to connect. At first glance I lamented the use of Micro USB over USB C in a time where standards really are moving forwards, but on further inspection, it became less and less of an issue. This comes down to the cable Roccat decided to bundle with the mouse. Instead of a run of the mill cable, it features grooves on the end, not unlike the Vita's charger. These slide effortlessly into the front of the mouse to give you a wireless mouse that can genuinely feel like a high quality wired mouse when desired. The cable is secure and you wouldn't know it detaches without somebody pointing it out to you. It's not to say you can't just use any Micro USB cable either. As long as the end isn't overly chunky, it'll fit in all the same. 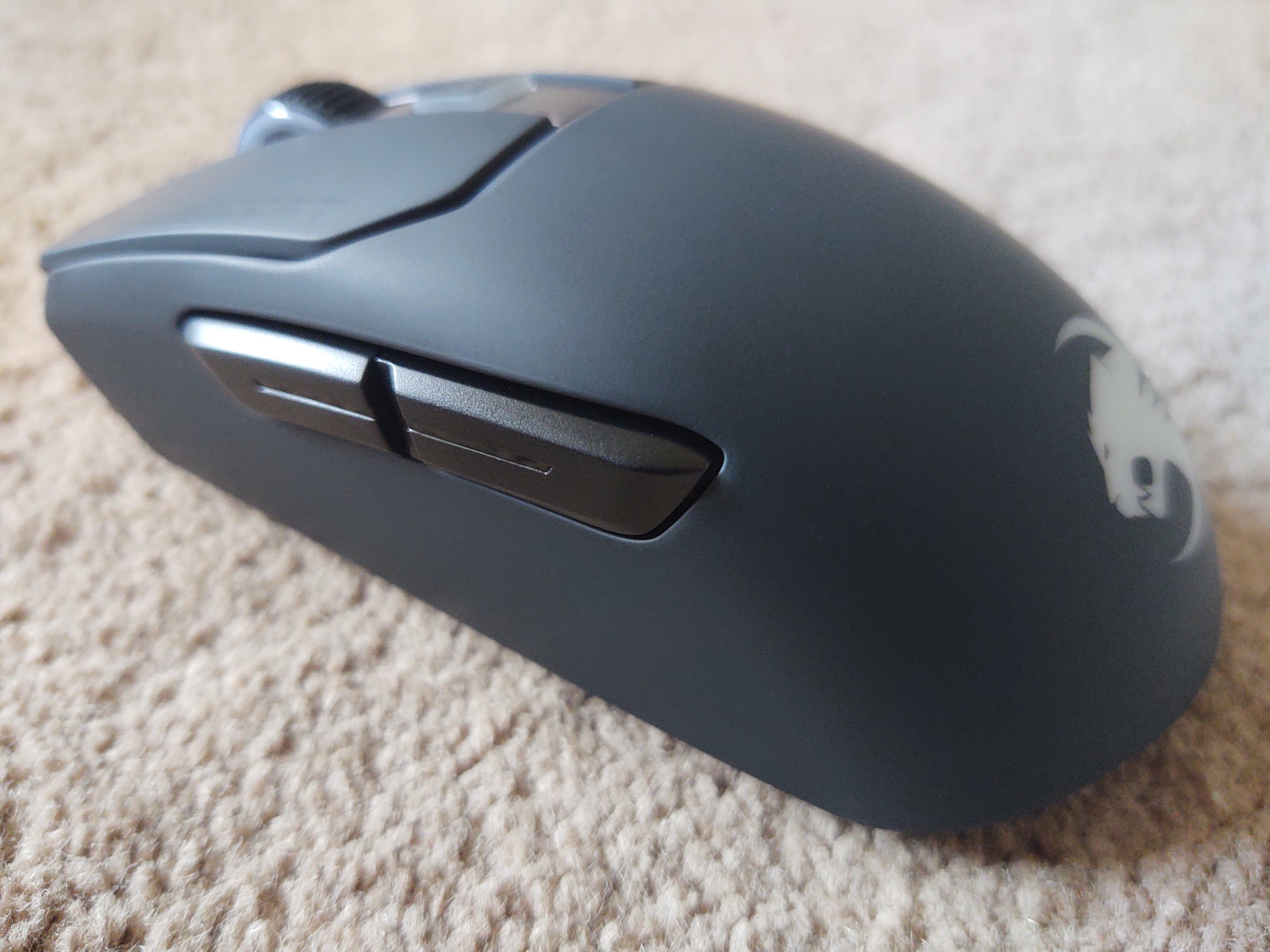 Looking at it from a wireless perspective, it performs admirably. To my eyes, there's no difference between wired and wireless. It's fantastic. Perhaps what I love most is that I can just leave the wireless dongle in one laptop, and have the mouse plugged into another. To switch between systems, all I have to do is unplug it, the mouse fully charged, and turn it on. It’s a bit of a niche setup, but one I'm grateful for all the same.

For those with an eye for the technical, you can find the information straight from Roccat themselves:

I'm not going to pretend to be an expert on the intricacies of mice. I don't have much in the way of a comparison for Roccat's Owl-Eye optical sensor, but I can say even at 16000dpi it feels divine to use. Toying with a high DPI on other mice, I found the experience jittery and in general really quite difficult to get to grips with. On the Kain however, it just works. It's smooth; really quite fast across my screen, but smooth all the same. I can make the tiniest of adjustments with an equally tiny movement, and when I want something a little slower, I can use the device's DPI button to scale it back to a much more manageable 3000. It's a joy, and much to my surprise, one I can appreciate without having to keep Roccat's Swarm software installed.

To avoid confusion, Swarm is a fine piece of software for the most part. It's about what you'd expect from a big brand, you have button configuration, lighting settings, and some of the configurable settings mentioned in the tech specs. Where I previously found fault in it was its tendency to crash when reviewing the Vulkan 120 keyboard, and when it crashed, it broke all of the keyboard's configurable settings. No macros, frozen lights, sad times. I can say with genuine content that it is no longer the case, or at the very least, it doesn't matter if it ends up happening. Thanks to a huge 512kb of internal storage, all your configurations are safe. You can setup your mouse how you like it, uninstall Swarm, and be on your way. If you choose to keep it installed, it doesn't need to stay open. This step away from the ever-increasing list of background programs is a huge positive in my eyes, and one I didn't expect to see. You can check out some screenshots below with the settings on offer. 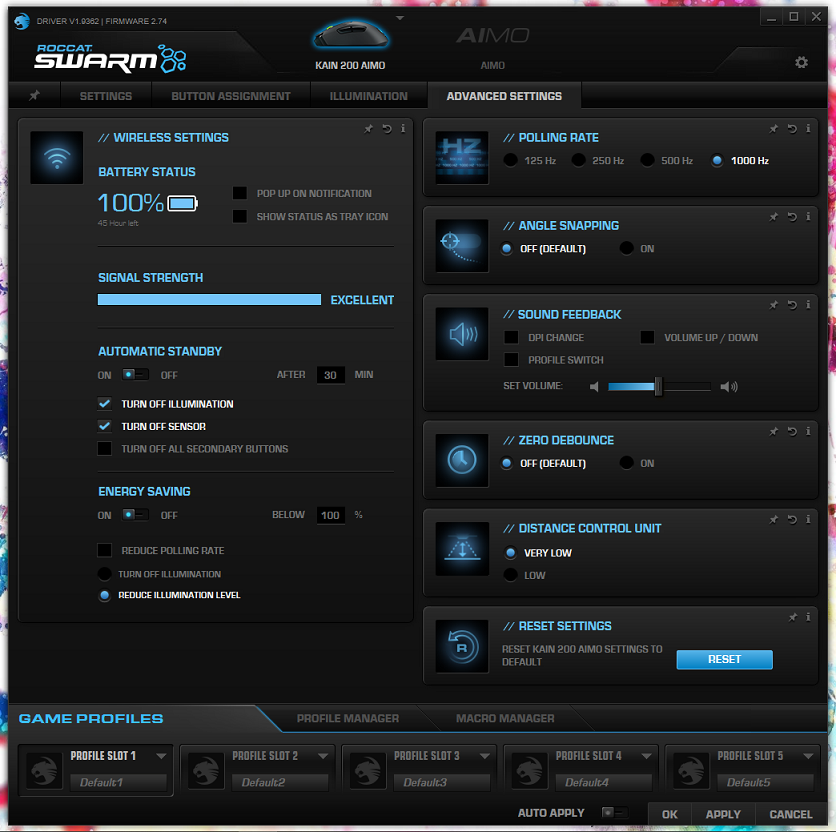 It's all fairly standard stuff, the most interesting in my eyes being the layered inputs. By assigning one of the buttons to Easy Shift, you can access a second layer while holding it down. It's nothing necessarily new or groundbreaking, with Razer having something similar, and even the KLIM mouse I previously reviewed having something along the same lines, but it's a feature I appreciate all the same. I managed to create the same setup I had with my old mouse with very little effort.

When it comes to battery life, the Kain advertises around 39 hours of charge, at least according to its page in Swarm. Though I haven't used it wirelessly for 39 hours straight, my setup of having it plugged in half the time largely keeping it on full charge, this number doesn't surprise me. I used it as a media controller as I marathoned series, and even forgetting to turn it off while the episodes were playing, it remained steadfast. With automatic standby functionality, as well as a low power mode that triggers upon reaching a configurable percentage of charge, Roccat definitely went beyond when considering how to get the most out of its wireless nature.

All in all, the Kain 200 AIMO is a great mouse. Functional both wired and without, it is responsive, customisable, and doesn't need software installed and running to get the most out of it. At £90, it might not be for everybody, but I am happy to see the Kain 120 AIMO retailing at £63 for those who don't need the wireless capabilities on offer. From what I can see, it's functionally identical, but without one at hand I can't say much more on it. If you have the cash to splash, be sure to check this out.