More than a decade after being officially discontinued, the GameBoy Advance is still held dear among gamers partly thanks to its plethora of games and also being one of the first handhelds to boast and kickstart homebrews. This love for the console has kept the console alive to date in the form of clones which include features the original GBA lacked, with the aim to perfect the beloved handheld. Today we’ll take a look at one such clone called the Revo K101 Plus and investigate how it stacks up to the expectations.

Before starting, I’d like to send my thanks to the Revo team for supplying the review unit and helping with the review. That said, let's see what the K101 Plus has to offer!

Initially released as the K101 in 2012 (check out Another World's review here), the K101 Plus is a revamped version of its predecessor, addressing some issues faced with the latter. Other than the additional ‘+’ symbol, the K101 Plus features the following improvements:

The other features it officially boasts are as follows:

For more technical specifications, here’s what the K101 Plus has to offer:

If you are not too familiar with the device here are a few words about how it works, excerpted from the official website:

The Revo K101 runs on ARM7 and ARM9 CPUs. The ARM7 controls the sound and 2D dedicated graphic hardware. The ARM9 is the master CPU for every other function. The system achieves a high compatibility rate via implementation technology which can handle sound, graphic, and data communications in all engines on the  System On A Chip (SoC).

The Revo K101 uses a special memory interface that lets the GBA cartridge interface be "emulated" via a modern DMA and DRAM interface. The K-Card is an access device letting the contents of the microSD card to be consumed by the SoC, and acts as a storage device as well to save files. On-board DRAM comes into play only when K-Card is used and works by accepting the entire ROM.

Here's a look at the PCB:

Now that the techy parts have been revealed, let's take a look at the actual hardware!

The Revo K101 Plus comes in a sleek black rectangular two part box with a matte finish and a minimalist design of the device itself. The two box parts fit tightly and securely together, giving a sense of overall safety to the packaging. The box itself is made of a relatively strong cardboard material, providing additional protection for its contents.

Let's see those goodies in more detail, shall we?

Since the K101 Plus mostly addresses the software issues of its predecessor, there has not been any modifications regarding the hardware. If you’re familiar with the original K101, you know what to expect.

With the K101 Plus, the Revo team kept the landscape design of the original GBA, all the while keeping the same position of the hardware buttons, albeit the additional ones. This setup is my personal favourite as it feels more natural and ergonomic when it comes to handling the console. And sure enough, the K101 Plus felt comfortable when placed in my palms.

Views from different sides: Front, Left Side, Right Side, Top, Bottom, Back

The casing feels sturdy even with its see-through casing. However, on the top of the console where the black plastic stripe meets the crystal case, you can see a slight bulge on either side of the hotkey. This is probably due to the console’s innards but does not make the casing fragile nor is it likely to come off.

Notice the slight bulge on either sides of the "hotkey"

In addition to the original buttons found on a GBA, like its predecessor the K101 Plus features addtitional buttons:

The buttons cannot be compared to that of the original GBA  and are not as you might expect them to feel. While the directional pad and the left shoulder button allow seamless control, the right shoulder button and the XYAB buttons require slightly more pressure to press and with the ‘Select’ button in my unit, I could barely feel that I’m pressing it which is not the case with the ‘Start’ button just above it. These little but noticeable attributes remind us that we are in fact dealing with a clone.

As per the advertised features, the unit comes with a rechargeable Li-ion Nokia  battery clone (BL-5B 3.7v 890mAh). Back in the days of ‘dumb’ phones, the Nokia battery was renowned for lasting long from a single charge. And sure enough, I could juice out around 6 hours of play time on a single charge, at the lowest brightness setting. The K101 Plus comes in ready to play, my review unit showed full charge when I first booted it up (if it was really at 100% is up for debate though), you just need to insert your GBA cartridge and game on! The battery will prove faithful enough for long hours of play or to keep you occupied during your daily commute without the need to look for a power socket and since it is removable, you can also carry spare batteries for longer trips with no power source.

The device has an AUO 3-inch HD LCD screen with its resolution being at 320x3x480. Its aspect ratio and scaling has three modes: 4:3, 3:2 and 240X160（240X160 is the same as what you get on original GBA). The aspect ratio can be conveniently changed via the extra in-game menu using the "hotkey". The latter can also be used to adjust the screen's brightness from its 5 available levels.

Below you can see the three scaling modes:

Although it is arguably better to play at fullscreen, the display isn't as sharp as with the original 240x160 display, but it's up to the gamer to decide his/her optimal gaming experience.

Bundled with the handheld is the K-card, the device’s very own GBA flashcard which will prove to be interesting among homebrew amateurs.

It looks and feels like a standard GBA cartridge but dons a spring-loaded microSD slot on the top to unleash its full potential when launched. However, as the Revo team has informed me (and having personally tested), the K-Card works only on the Revo K101 Plus and not on other GBA systems as it is a hardware clone that has been programmed to function only on the K101 system. Even launching the card on the K-101 displays its dedicated startup screen as opposed to the traditional GBA one:

One of the most exciting features of the K-Card is that it has embedded 8-Bit emulation for NES, GB, GBC, Sega Game Gear, Sega Master System and PC Engine/TurboGrafx-16 Entertainment SuperSystem. No need for emulators or side loading apps, the flashcard emulates those itself right off the bat! It also functions as a multimedia tool for playing MP3 files, view images and reading texts. These additional features are explored later in this review.

The only speaker on the device is located just below the XYAB buttons, which is not the best location as you can occasionally obstruct it with your thumb and muffle the sound. The quality is not the best either but everything is fixed with a pair of nice headphones. The volume can easily be adjusted using the volume adjustment wheel located on the right side.

One noticeable drawback is the poor sound quality when running the built-in 8-bit emulators.

Even if the setup is fairly simple and straightforward, a set of instruction would have been useful if included in the console’s package. However, the Revo team has redeemed itself by providing a comprehensive setup guide over on their website.

Here’s how to proceed:

4. Make a folder in ROOT of the microSD named ksystem

5. Place the GamePic and Cheat directories into the ksystem folder

6. Drag/Drop some ROMs or Homebrew anywhere in the microSD

Firmware updates are also made available over here.

At the time of making this review, I could only compare the K101 with the original GameBoy Advance, kindly provided by PlayMania. Nevertheless it makes for a good comparison since they both have similar form factor.

The most obvious differences between the two is the lighter weight and slimmer design of the K-101 which makes it a suitable handheld to carry around and fit in your pocket. You can judge by yourself from the pictures below:

Since the K-101 has different aspect ratio than the GBA, playing games at full screen isn't as crisp as playing on the native 240x160. However the scaling can be easily modified via the "hotkey" to suit the gamer's preferred resolution.

Screen Comparision of the GBA and K-101 Plus

The K-Card is not only a gateway to access GBA roms but also additional features like 8-bit emulation, MP3 player, image viewer and text reader. Let's see how the card performs these.

A very interesting feature of the K101 has been the embedded 8-bit emulation and the new console also includes it. This feature allows for NES, GB, GBC, Sega Game Gear, Sega Master System and PC Engine emulation and plays files of GB, GBC, FC, NES, PCE, SG, GG and SMS format. Accessing the roms is as easy as selecting them from their stored location in the microSD, and voilà!, they’ll launch. As with its predecessor, the emulation isn't the Revo team's original work but based on homebrew emulators, including enhanced copies of PocketNES, Goomba Color/Goomba Paletted, SMSAdvance, and PCEAdvance.

When tested, all emulators played very well except for a common feature, that of a broken sound quality in all but the GB and GBC emulators which indicates room for improvement, possibly in a future update by the Revo Team.

This one is a basic MP3 player. Just choose the mp3 file from its location on the microSD and it will play. The controls are intuitive; the "Up" and "Down" directional buttons can be used to navigate through your songs, pressing the "A" button will continue/pause the song and "Start" button will play your mp3 files at random. Once playing, the screen will display information about the MP3 file including the file name, kbps, Hz, audio type, play mode and length of the song. Although as stated before the K101 Plus’ speaker is not the best, plugging in your favourite headphones should give you the sound quality you’re looking for.

This simple image viewer allows you to view only JPG files. It allows zooming in and out with the "L" and "R" buttons respectively. And when zoomed in, you can move the picture around with the directional buttons.

Yet another multimedia feature of the K-Card is the text reader. This simple yet effective function allows for the viewing of text files of ANSI/UTF-8 .TXT format for in-game guides and/or reading directly from the microSD, should you have the urge to read on your K-101 Plus. The directional buttons are used to move up, down, right and left if the text does not fit the screen however text file can be adjusted to fit the screen by pressing the "A" button and choosing the "Warp Mode".

Note: In order to see your .txt files on the K-Card, you'll have to enable it by going to 'Option" using L/R, then 'File Filter' and change TXT to ON. Else, you won't see where your .txt files are supposed to be.

During the compatibility tests, in addition to the roms I've tested, I’ve also loaded the roms and homebrews that faced issues with the original K-101, according to Another World's review. I’d also like to thank PlayMania again for providing the GBA cartridges used for testing and comparison.

It should also be noted that the K-101 Plus is not compatible with neither GameBoy nor GameBoy Color cartridges, which is kind of a let down if you wanted to play your retro collection on the device. 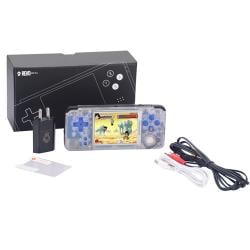