Get your survival-horror fix with the game that started it all, now on the Nintendo Switch.

Resident Evil 2 took the world by storm when it released earlier this year, quickly becoming one of the most well-received games of 2019. Currently, it sits atop OpenCritic’s Hall of Fame as the number 1 entry, against other titans like Sekiro: Shadows Die Twice and Devil May Cry V. With such a successful remake on their hands, Capcom could clearly see that nostalgia and popularity for the series was at an all time high, which resulted in a bevy of Resident Evil remakes making their way to the ever-popular Nintendo Switch; a perfect combination. Now it’s time to return to a new-old classic, in the form of Resident Evil HD, for the Nintendo Switch.

Resident Evil HD is a rather amusing game, as it’s a remake of a remake. Originally released in 1996 for the PlayStation 1, then remade for the Nintendo GameCube in 2002, followed up by receiving a remake in 2015 for both seventh and eighth gen consoles, we find Resident Evil 1 returning to a Nintendo system once more. Just as with the 2015 release of the game, this version boasts HD visuals, widescreen support, and a new control scheme, for those that dislike tank-style movement. These changes help bring the title back from the brink of being overly dated, and make it much easier for a new generation of players to pick up. 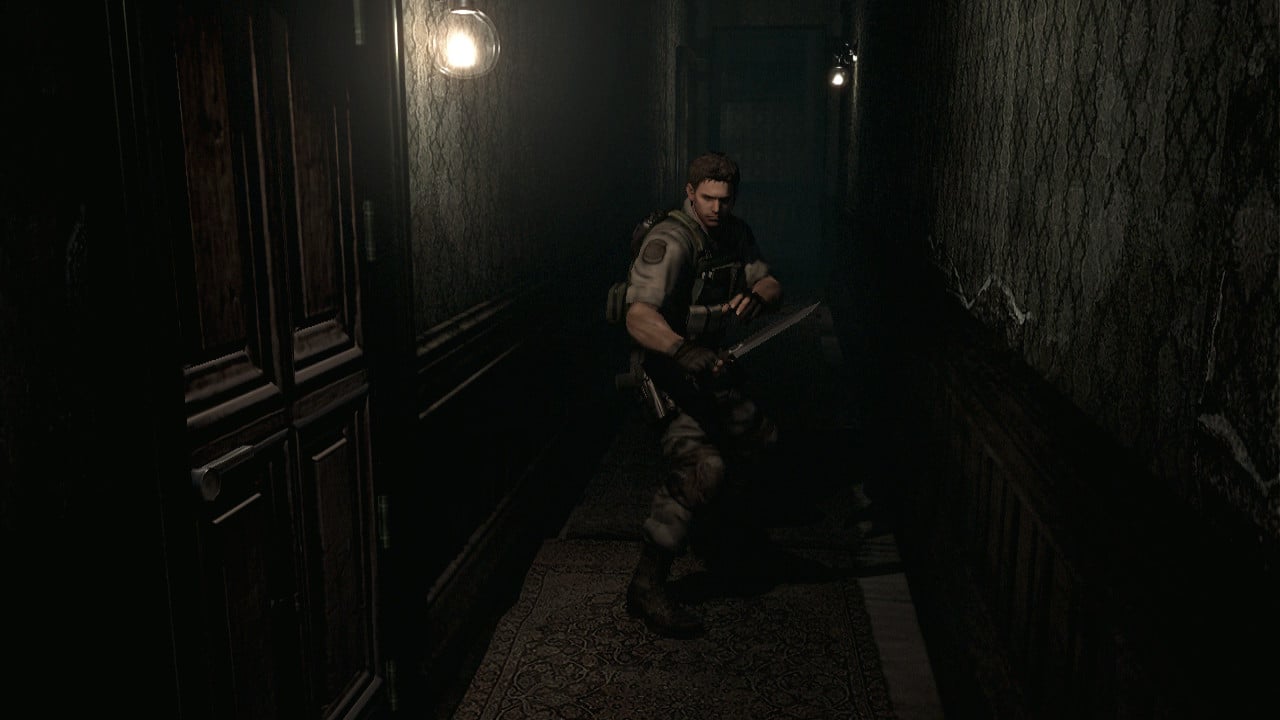 Previously we took a look at Resident Evil HD, when it first released over four years ago. As opposed to our Chief Editor in his aforementioned review, I have no prior experience with the series, and went into things blind, with mild expectations.

Knowing only that the concept of Resident Evil was about being spooked and shooting zombies, I wasn’t quite sure what to expect. After my first 30 minutes or so with the game, I had begun to realize that Resident Evil 1 wasn’t actually about action, or even fighting waves of the undead. It certainly has those elements at times, but the main focus is more methodical and strategic. You play as separate protagonists; Jill Valentine and Chris Redfield, two Alpha Team S.T.A.R.S. agents who are in the process of investigating a multiple murder case. Everything goes awry when some weird zombified dogs begin to attack and the team members lose contact with one another in the chaos, leaving them split up and stuck inside a creepy abandoned mansion.

The Nintendo Switch version has a few oddities when it comes to the quality of the port. Standing out in an egregious way are the loading times, which range from barely tolerable to utterly atrocious for the most part. Even when installed to the system's internal memory or a micro SD card, you will frequently experience load times that can last up to 16 seconds. This is especially noticeable due to how Resident Evil plays; a majority of the game is spent exploring small rooms within the mansion, with the occasional hallway. Each time you go through a door, you'll be met with a loading screen. With just how frequently you're walking in and out of doorways, a good amount of your time will be spent waiting, and it can get annoying. If you're willing to overlook that, the game looks absolutely great, in both handheld and docked modes. While it is locked to only 30fps, it isn't much of a dealbreaker, as the slow-paced nature of the gameplay won't require much from you in terms of precision. The port also does a decent job at staying at a stable framerate, with an exception for the cutscenes, which can cause the cinematic moments to look weirdly choppy. 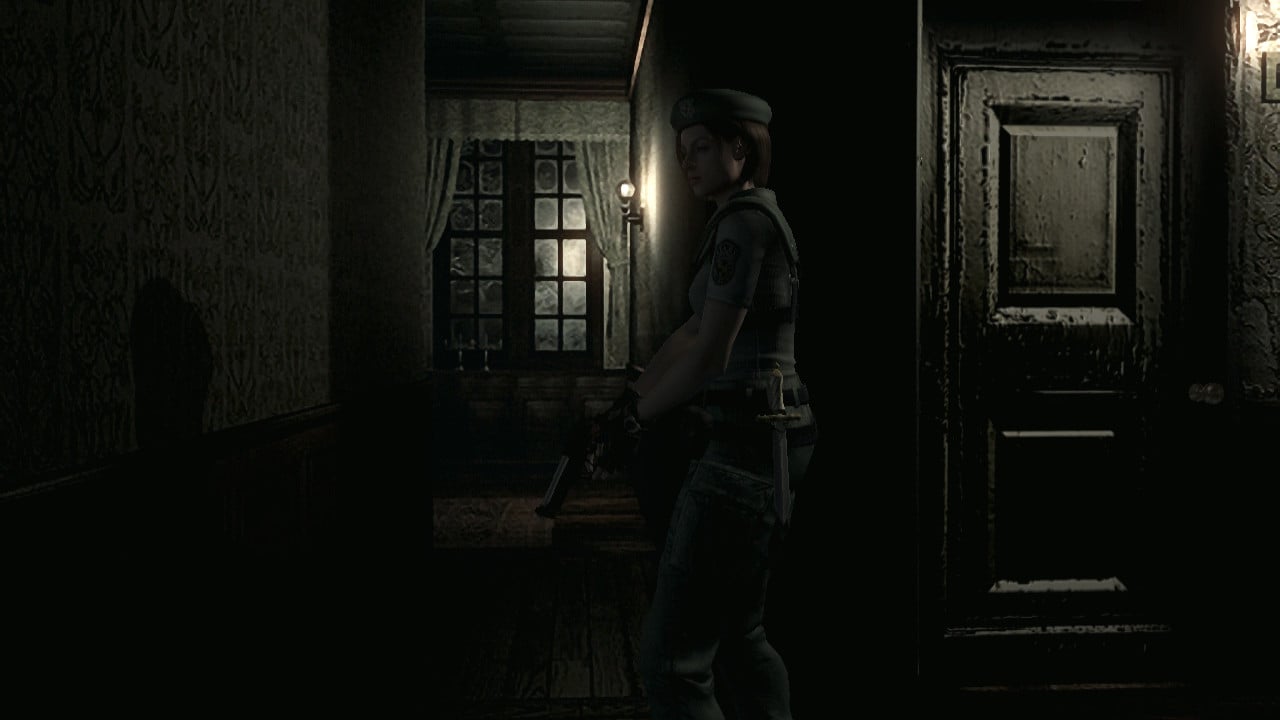 While the remake does well to modernize gameplay elements and visuals, there's a clear indicator of this being a game from the late 90s, through the laughably dorky voice acting. Every line is delivered with the grace of a high school drama play, which in all honesty, slightly adds to the retro horror movie aesthetic. Apart from that, the sound design is absolutely superb; each step you take through the carpeted mansion has a nice "crunch" to it, the creaking of floorboards add a tinge of tension to your silent exploration, and distant zombie groans will put you on edge, having you wonder which direction they'll stumble in from.

Despite being billed as a survival horror title, Resident Evil had me more mildly startled than outright scared on most occasions. What it does excel at doing, however, is making you uncomfortable and unsettled at every turn. Impressive lighting effects will cast dark foreboding shadows into hallways with fixed camera angles that perfectly set the mood. Gameplay elements also lend a hearty dose of atmosphere to the game, by giving you a limited inventory, meaning you need to explore every nook and cranny to keep yourself alive and solve tricky puzzles, but also carefully manage what you're holding, otherwise you'll be forced to backtrack and risk getting lost, or accosted by zombies and wasting precious bullets. Even your ability to save is limited, which makes every nerve-wracking use of your Ink Ribbons to record your progress feel like it really counts.

Speaking of backtracking, there certainly is a lot of it. A majority of puzzles will require you to locate them within the labyrinth of the mansion, solve them to obtain a key or item that will allow you to progress, and then go from room to room trying to access all the new areas you've unlocked. Certain outcomes will also differ depending on how quickly you can navigate the rooms and rescue your fellow S.T.A.R.S. agents, which adds a subtle layer of stress to your already spooky adventure. As you make your way through the manor, you'll get turned around quite easily, though you have a map to help you get your bearings. The new control scheme does well to make movement and exploration feel nice, but at the cost of scene transitions being awkward from time to time, as the game was always intended to be played with tank controls. 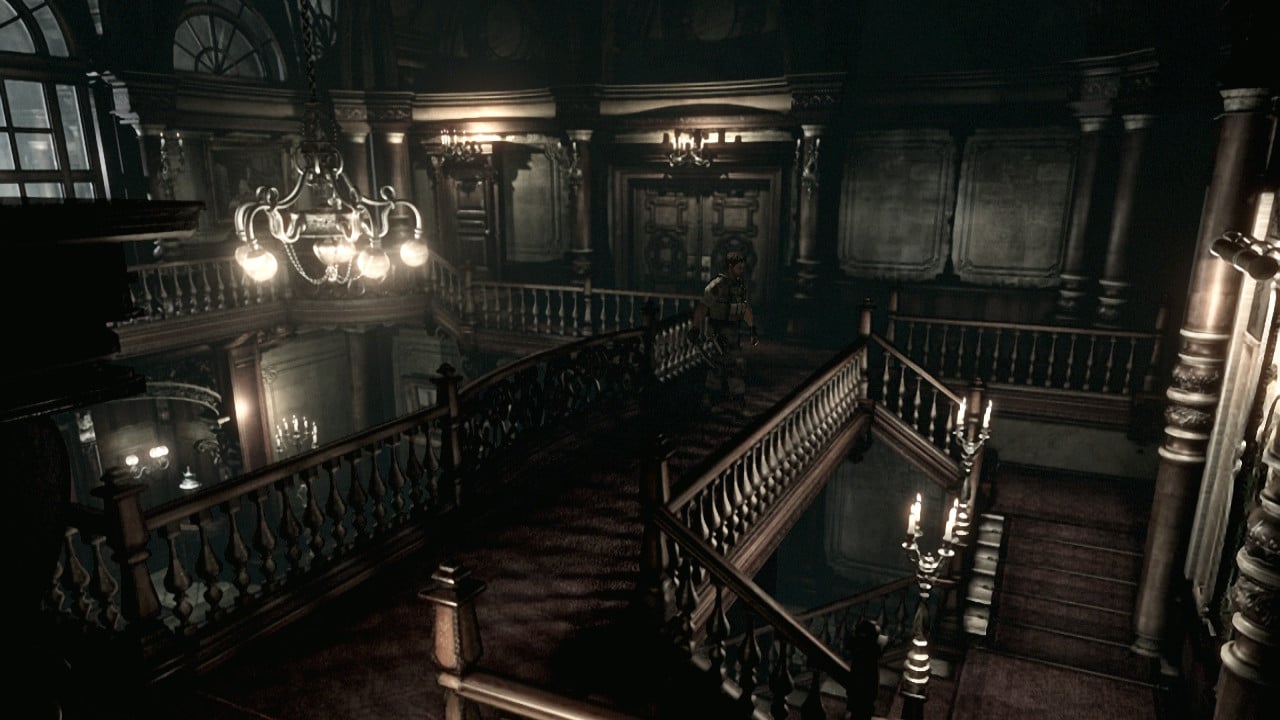 When it comes down to it, Resident Evil HD on the Nintendo Switch is a hard sell for those that are familiar with this version--especially due to its $29.99 price tag--unless you’re sold on the idea of having some survival horror goodness on the go. For those like me, who have never managed to play a Resident Evil game before, this port is serviceable enough. While it’s best played on other platforms, the Nintendo Switch version will no doubt be many’s first experience with the series, and it’s a fine way to jump into the franchise.