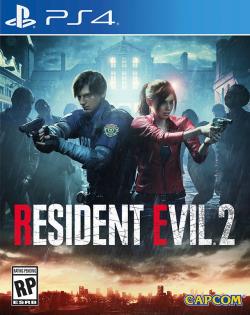 Every now and then there comes a game that defines a genre, forever weaving itself into the fabric of gaming history - Resident Evil is one such series. I still remember when I was a child, staying over at my friend's house, playing Resident Evil 3: Nemesis on his PlayStation late at night. It was frightening, but we persevered and survived. The series basically coined the term "survival horror" and its gameplay mechanics have been endlessly emulated over the years. Unfortunately, some of the later installments like Resident Evil 6 or Operation Raccoon City didn't quite live up to the legacy of its predecessors, much to the critique of the fans, and while Resident Evil 7 was definitely a triumphant return to form, it didn't exactly feel like a Resident Evil game. Will Resident Evil 2 (2019) turn the tide? Will the survival horror genre rise from the dead? Read on and find out!
Resident Evil 2 (2019) is a survival horror game available for the PS4, Xbox One and PC.

Take Me Down to Raccoon City

It is September 29, 1998. It's been two whole months since the Mansion Incident in the Arklay Mountains where the special elite force of Raccoon City Police Department operatives, also known as the S.T.A.R.S, was sent to investigate unexplained murders in the area and faced an unexpected foe from beyond the grave. The S.T.A.R.S have been missing ever since, prompting Claire Redfield to embark on a search for her lost brother with whom she lost all contact. She stops at a local gas station and can't believe her eyes - she's being ambushed by monsters who appear to be the former staff and patrons of the establishment, their blue skin rotting, their bodies shambling towards her. There's someone else at the station - a young man trying to fight his way out. Both armed with their sidearms they shoot their way out of the gas station and drive off towards the city, dazed and confused. The stranger who's just saved her life, Leon S. Kennedy, turns out to be a rookie police officer - talk about a tough first day on the job. He suggests that they both make their way to the Raccoon City Police Department where they can no doubt find safety and answers. Unfortunately, the monsters they've encountered earlier have now infested the entire city, causing them to crash their vehicle. Separated by a blaze of gasoline and wreckage they decide to go their separate ways and regroup at the station. For now, both of them must focus on one thing and one thing only - survival.

Things don't look too good for our two protagonists...

Out of all the Resident Evil installments number 2 is often hailed as the best RE game of all time. The sheer amount of content, namely the two campaigns, both with branching paths leading to different outcomes, was so substantial at the time that it wouldn't even fit on a standard PlayStation disc. It perfected what the original introduced and became synonymous with the term "survival horror" in an instant. Needless to say, fans such as myself were overjoyed when we found out that Capcom is giving the game a much-needed facelift in this 2019 remake, introducing new gamers to a game that we, older gamers, grew up with. The result is nothing short but stellar - Resident Evil 2 (RE2 2019) manages to preserve the spirit of the original source material while simultaneously adding new gameplay elements and "switching things around" just to keep gamers with good memories on their toes.

Where the Girls are Cold and Not Particularly Pretty

The survival horror elements you remember from the original game are all present either intact or improved, but for those uninitiated, I'll go through the general idea of classic Resident Evil. RE2 2019's gameplay revolves around exploring the city and solving various puzzles that impede your progress while defending yourself from seemingly endless hordes of zombies. Naturally, zombies are not keen on dying unless you manage to destroy their brains - in most other cases they will simply get back up in a short while and continue to attack you until you kill them a second time. In the original, zombies that were permanently dead left behind a pool of blood - this feature has been removed in the remake, further ramping up the difficulty and forcing players to rely on their keen sense of hearing before approaching a suspicious corpse. While individual zombies are quite slow and not particularly smart, they have a tendency to either attack in large hordes or to burst into the Police Department through windows, forcing you to board them up with the limited supply of wooden boards available in the area. All of this becomes even more complicated with limited ammunition - bullets, shells and gun powder are hard to come by, so every shot you make counts. A single bullet can mean the difference between life and death later down the line, making conservation of ammunition the central point of gameplay. Of course all of that is easy to say when you're not in an extremely dark environment with many branching, narrow corridors filled to the brim with the undead - in practice it's quite challenging. Often times you will find yourself having to make the decision between fighting your enemies to keep the area secure for later or fleeing the scene until you resupply with much-needed ammunition and healing items.

Speaking of resupplying, the crafting mechanics from the original make a return. While First Aid sprays and bullets are scattered all over the hellscape of Raccoon City, they're rare, forcing both Leon and Claire to be a little creative. Most times you will have to craft your own essentials which can be done directly from the inventory screen. In terms of healing, you will be mixing three types of herbs - Green herbs which restore your health, Blue herbs which detox you in the event of poisoning as well as improve your resistance and Red herbs which, while useless by themselves, greatly enhance the efficacy of other herbs. As far as ammunition is concerned, RE2 2019 adapts the Resident Evil 3 model of crafting, with a twist. Depending on which character you choose at the beginning of the game, you will be mixing black and yellow or white gunpowder to produce bullets. This time around however you don't have to visit a special ammunition station - gunpowder mixing is available directly from your inventory screen which greatly cuts down on unnecessary travels and removes a major annoyance from the game. Naturally, all of your resources are limited, so the game forces you to pick between what kind of ammunition you want to craft quite frequently. Depending on your playstyle and situation you can either go for quality or quantity - sometimes you might really need a lot of 9mm bullets to dispatch a large horde of zombies, other times you really need those grenade launcher shells, however few, to kill a boss or a stronger enemy like the Licker and other horrifically mutated victims.

The Lickers and The Tyrant are just two of many B.O.W's you'll face in Raccoon City

If everything you've already read sounds like a lot of work under stressful conditions, there's more! The Umbrella Corporation, the masterminds behind the T and G viruses that decimated the city, have dispatched one of their state-of-the-art bio-organic weapons to "clean up" the mess - this includes all witnesses. The Tyrant, affectionately named Mr.X, is an abnormally large humanoid mutated via viral injections, equipped with a special bulletproof vest. The Tyrants are designed to be a weapon of the future, impervious to gun fire and devoid of emotions. Mr.X doesn't feel pain, cannot be reasoned with and can only be stopped temporarily, making combat a waste of both time and resources. He will pursue you throughout the game and he's capable of entering most areas besides the Safe Rooms, just in case you were beginning to feel a little too comfortable in the abandoned wasteland of Raccoon City.

As mentioned before, adversity will push you through the game as you collect key items and solve environmental puzzles, opening new paths for you to explore. All of the hallmarks of the series like the special keys, generators and switch boxes are all present, so the game will require you to not only employ expert marksmanship, but also your intellect. Most of the puzzles are relatively simple to solve and give you a little respite as solving them pauses time in-game, so you can't be attacked during solving them, but they often do require you to collect their necessary components across the map, forcing you to face your fears instead of covering in fear of the unknown.

I have to say, it's been a while since I played a horror game that encompassed all of these hallmark elements of the survival horror genre in one package. I'll be the first one to admit that I am not a huge fan of remakes. In fact, I often criticize the industry for recycling old ideas and rehashing old franchises, or even downright re-releasing old games instead of investing in new and fresh experiences. With that said, I loved every moment of this remake. RE2 (2019) is what I call a "perfect remake", and only a few titles such as Metal Gear Solid: The Twin Snakes or the previous remake of Resident Evil 1 deserve this prestigious title. Taking a game that's already considered to be the high point of a series and making it "better" is not an easy task, and that's precisely what Capcom managed to do here. RE2 2019 modernises the gameplay of the original in every way - gone are the static camera angles, now replaced with fully three-dimensional environments, but the game doesn't lose the cinematic feel of the original in the process thanks to excellent lighting and sound effects. You still get to save your game on a typewriter, but this time around you're not wasting your inventory slots by carrying around different types of ink ribbons. You finally get to craft your own ammunition on the go, but you don't have to go to any particular place to craft it - you can just do it in the inventory. All of these quality of life improvements tied with a brand-new soundtrack, new voiceover and a slightly revamped, more unified and more serious plot make RE2 2019 the definitive version of the game. Of course there are some flaws here and here, but they're very minor and even mentioning them would make me feel like I'm nitpicking a product that every gamer should play - fans of the series or not. You would think that after this many installments the Resident Evil series would feel a little stale, but the opposite is true - it has risen from the dead. The game returns to the roots of the genre and, instead of relying on jump scares which do nothing but startle and annoy the player, creates an atmosphere of horror and dread by putting constant pressure on the player through gameplay mechanics, not cheap tricks. If you're a fan of getting spooked, invite some "Evil" and let it "Reside" in your household - you won't be disappointed.

Verdict
You, goodha2, Justinde75 and 10 others like this.
Unlike this review