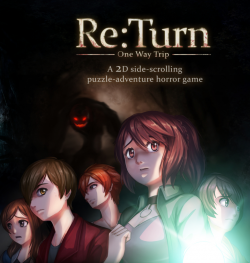 We're riding to the end of the line in this follow up review of Re:Turn - One Way Trip.

​
Tickets please
Re:Turn - One Way Trip is a 2D side-scrolling puzzle-adventure horror game developed by Red Ego Games and published by Green Man Gaming Publishing. The story is still the same as I had previously written; Five friends go on a camping trip before the realities of post-college and adult life take over. Our protagonist is a young woman named Saki, who places a haiku in her fiance's backpack, having believed he wrote and misplaced it. Soon it is revealed he did not and accusations begin to fly as to who the author is. When one friend flees the verbal assault, the remainder of the party goes to sleep, to let things cool down between them. But, awakening in the middle of the night to find she is all alone, Saki explores the dark forest and finds a derelict abandoned train. Boarding in to search for her friends, she quickly realizes that she needs to find a way to escape the nightmare she has come across. 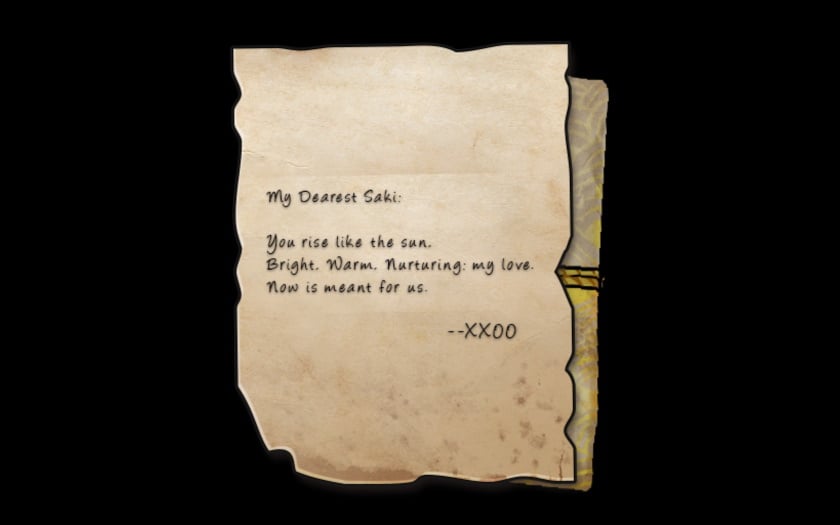 ​
As I wrote previously, the story is broken into chapters and the set up is typical of the horror genre; Five friends go camping in the woods and spook things happen. The story and game itself is not really all that frightening, offering more of an atmospheric and slow burn approach to horror. Though that isn't to say it doesn't have its more brutal and creepy moments, but those are pretty few and far between. There is also some tragic love story elements and a time travel aspect, which Saki initially believes is a dream. In the past, she witnesses events that occurred on the train as it traveled to Kyoto during WWII. While she is spectral in the past, she can still interact with objects and take things that, much to her horror, come back with her in the present.

There is a small cast of characters in the past; Two newlyweds on their honeymoon and a young man whom is in love with his classist mother's nurse and dreams of being a composer, against the wishes of his father, who owns the train line. There are a couple of mothers and their small children as well as other characters. The past acts as good contrast, being full of life and people, to what's going on in the present. Though the past does have its share of eeriness. One of the small children, a girl named Ayumi, is not only able to see Saki when she is in the past but is also aware of her search for her friends, forcing her to assist Ayumi with things such as finding a doll you hang in exchange for her help. As a whole, the story is pretty well scripted and has its moments. Saki and the supporting cast are fleshed out and I found the time travel aspect to be a pleasant twist and tool for the narrative. There are some exceptions to bits of dialogue and a slightly underwhelming ending. Spooky children are always a plus as well. 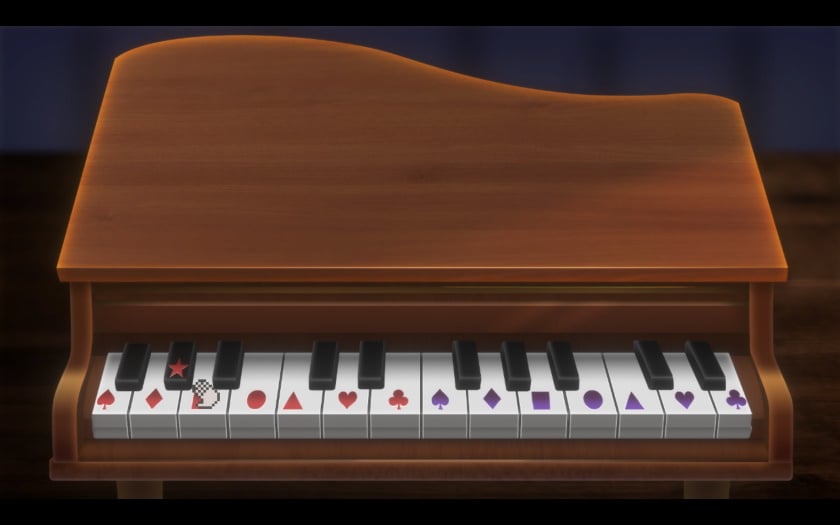 ​
The gameplay honestly didn't change much beyond what I had played and expected in my last review. How you interact with the environment, movement and your inventory have all remained the same. You still explore and investigate the train, solve a puzzle or problem, get something and repeat. It does get repetitive and there is a lot of backtracking but not so much that you stop enjoying the game. There are more puzzles now, as one would expect and some of the later ones are surprisingly difficult, though for varying reasons. Some, like a puzzle involving finding and completing a set of dolls, really require you to think, investigate your surroundings and think about what you have in your inventory. I think I ran past and checked the area I need to be in for at least 15 minutes before what I needed to do dawned on me. Little clues are offered, though some are pretty simple to solve. One puzzle you encounter twice is a simple ball maze, rotating to get the metal bearing to the exit. Not the most difficult puzzle but the physics for the ball is frustrating, causing it to bounce almost every time you move the maze. I was stuck near the end of the maze for what felt like an eternity because the ball kept bouncing up and going down the path it came from. This was hard, but not for the appropriate reasons. Besides new puzzles, not much has changed as far gameplay goes, for the most part.


Off the rails
The art and, in particular, pixel art is a treat in Re:Turn. I had previously written that the detail in the backgrounds were of particular note, which lend themselves well to the dim lighting and setting. I was equally pleased with some of the sprite work, with some things being quite brutal, like a pregnant corpse, which I was able to identify as such almost immediately before the close up artwork cut-in; again another testament to the detail put into the art. It gives some very Silent Hill vibes all around but I can't say it makes the game all that frightening, compared to say first person or 3D horror titles, but that is a trade-off taking the 2D approach. Even some of the more brutal and bizarre parts of the game - while I would say are still effective in terms of the story - are slightly undercut by the 2D style used. There isn't much to say about the audio as it is so minimal that you could hardly say it has any soundtrack at all. I wrote that a jaunty little tune plays in the past, but only in the dining car. Beyond that, there's an opening and closing track, but most of the game is filled with silence and the sound of your footsteps. The occasional ghastly spooky sounds break that silence but not very often. I would say the lack of music adds to the atmosphere but doesn't do much to make it memorable.

I had a couple of issues in my last writing for Re:Turn, both of which were art related. While the character portraits used static images with different expressions, in one puzzle of the game, Saki must gaze into her reflection to obtain a mask. When she does so, we see her fearful face, shivering with fear and blinking her eyes. There was a small gap all the way around each, showing that perhaps there was an issue with size or layering. This is still present in the finished game and certainly isn't the end of the world or game breaking, but it doesn't help with an overall polished experience. They did, however, fix an issue with the wrong character portrait and name being displayed during dialogue, which is great. 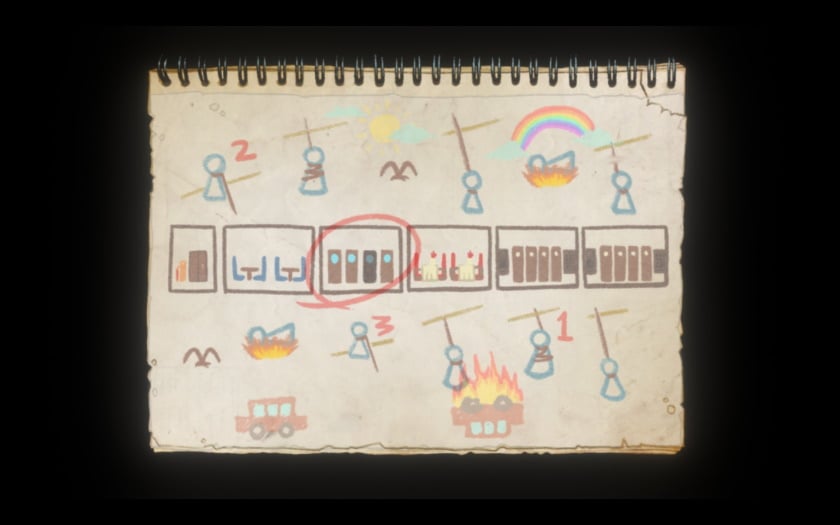 ​
In the previous review of Re:Turn, I had mentioned a shadow monster, which had appeared just before the game ended. I figured that there would be a fleeing/chase aspect added to the game. This was further supported when Saki decides she's done just walking and can now run. And while it did make further appearances, the game itself takes control and makes you run into the next section on its own, relegating it to being a part of the story, until, near the end of the game, it reappears, only monstrously large. This time, you have to run yourself and it is insanely difficult, though it might not be entirely intentional. Before the chase begins, you have dialogue and when that passes, the chase starts. But if you were holding down run and left, nothing happens and you see the rare game over screen. You learn from it and try again, but this time you didn't press left fast enough or too soon. You try again and it feels good, you're running away but its slowly gaining and then even though its hands seemed a good distance away, game over. After several attempts, I began to wonder just how big these hit boxes were, because it seemed like they were too large. Even with what would feel like a good distance and it wasn't even almost gonna touch you, it was game over. It was like being even just a frame short of the correct timing would be a game over. Perhaps it was intentional, to add to the tension, fear and joy of success but, if that is the case, I think it replaces those with something worse; anger and frustration. It made it feel more like a punishment than something enjoyable. Even after moving on, it only succeeded in making me hope that doesn't happen again. If not intentional, it is an unfortunate oversight and again doesn't help with the overall experience.


End of the Line (Again)
Re:Turn - One Way Trip, as a whole, is an overall solid horror title. It's not perfect by any means, lacks some polish here and there and might not frighten you outright but that shouldn't dissuade you from checking it out as it's shortcomings are forgivable. The story and pixel art are definite highlights, as are most of the puzzles. I clocked about 8 or so hours, though that may vary depending on your skill at solving puzzles. All in all, every part of Re:Turn - One Way Trip melds together to a nicely atmospheric and creepy addition to the horror genre.


Re:Turn - One Way Trip [Announce Trailer]
​
Verdict
Prans likes this.
Like this review