When I think of glowing green gaming items, it's Razer that comes to mind. At £170, does the BlackWidow Elite do enough to justify its premium price point?

As companies go, Razer is an odd one for me. I've used a BlackWidow Chroma, one of their earlier RGB keyboards, for almost six years now with my only issue coming from one of its legs breaking off. As keyboards go, I have a preconception of build quality and polish with Razer, to some extent at the cost of style. What was the point of a mechanical keyboard if it didn't scream gaming after all? Times have moved on, and with the mechanical keyboard becoming more and more common on every type of setup, can Razer put forward a keyboard to cater to a more general audience? 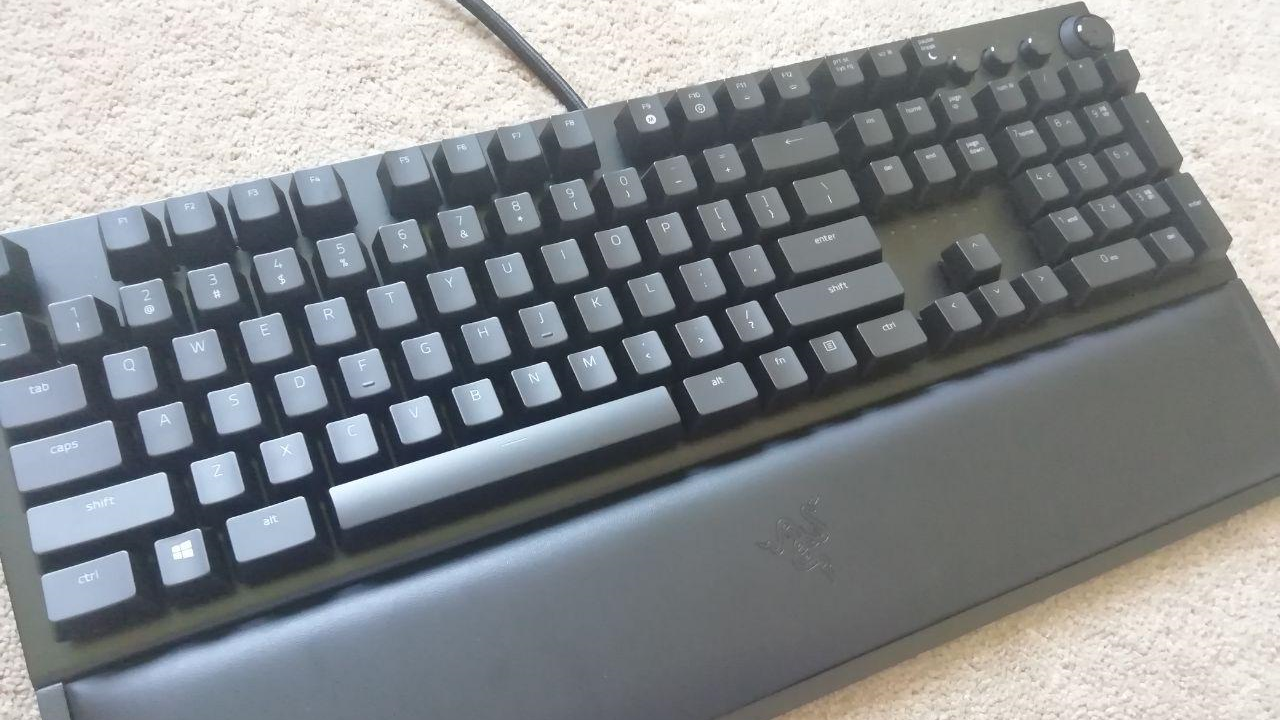 To avoid confusion, the BlackWidow Elite is still very much a gaming keyboard, make no mistake about that. Advertising their proprietary switches for peak precision and performance, remappable keys, and that every key can hide a second function, it has everything in place for a fantastic gaming offering. The keyboard sent for review contains Razer's Yellow switches, to the best of my knowledge being a close match to your traditional reds. Having come from their Green switches, similar to traditional blues, in my BlackWidow Chroma, it took some getting used to. Gone are the satisfying clicks you best associate with a mechanical keyboard, and in their place, a new and incredibly odd sense of reactivity quite strangely no less satisfying. Where with Greens you would use the switch's click as feedback the input has been registered, Yellows find themselves triggering before you really realise you want to hit them, at least until you get past the initial culture shock. From my imprecise attempts at measurement, you're looking at around 2mm of pressing before your input is registered, with the keys having around 5mm of travel distance in total. This was measured with a ruler held to the side of the keys, so the numbers may be slightly off, but I can say with certainty these keys feel remarkably responsive.

Looking at its feature set is an interesting mix. You have your standard RGB lighting, complete with a configuration tool we'll look at later, you have assignable macros, but notably no specific macro keys, you have Razer's gaming mode, disabling the windows key when active, and as a nice addition, you have four multimedia buttons, complete with a digital dial. The multimedia buttons in particular stand out to me, giving a really nice overall feel to the keyboard as something more than just gaming, and this idea bleeds into the overall design. To be blunt, the keyboard looks normal. The font used for the keys is slim and pleasant to look at, the bulk of specialised macro keys I'm used to seeing on the Chroma has been cut off, instead opting to store them as additional options accessed when holding the function key. Even the small addition of multimedia options screams everyday use. Instead of looking like an eight year old's fantasy of what a gamer should use, it looks and feels like a keyboard that wouldn't be out of place in an office, at a school, or wherever else you might want to take it. Some like the garishness, but I have an appreciation for a more muted and clean design, and Razer really impressed me with this. Another small aspect of appreciation comes from the case's design. The Chroma's keys were sunk into the body of the keyboard, this pit acting as a magnet to hairs and dust, the only real means of cleaning being to remove every key. With the keys sat atop the case here, it's far easier to blow compressed air from the bottom to sweep out all the junk. It's a small change, but one I appreciate immensely.

With customisation such a large part of these fancy keyboards, it needs to be backed up with an easy to use software solution; no matter how many great options you have, if you can't figure out how to access them, they're useless. It should really come as no surprise to say Razer hit it out of the park in this department. Having used their Synapse software in the past with my previous keyboard, everything functioned simply and exactly as I was used to. By selecting the keyboard tab and entering Chroma Studio, you're presented with an incredibly easy to use interface. 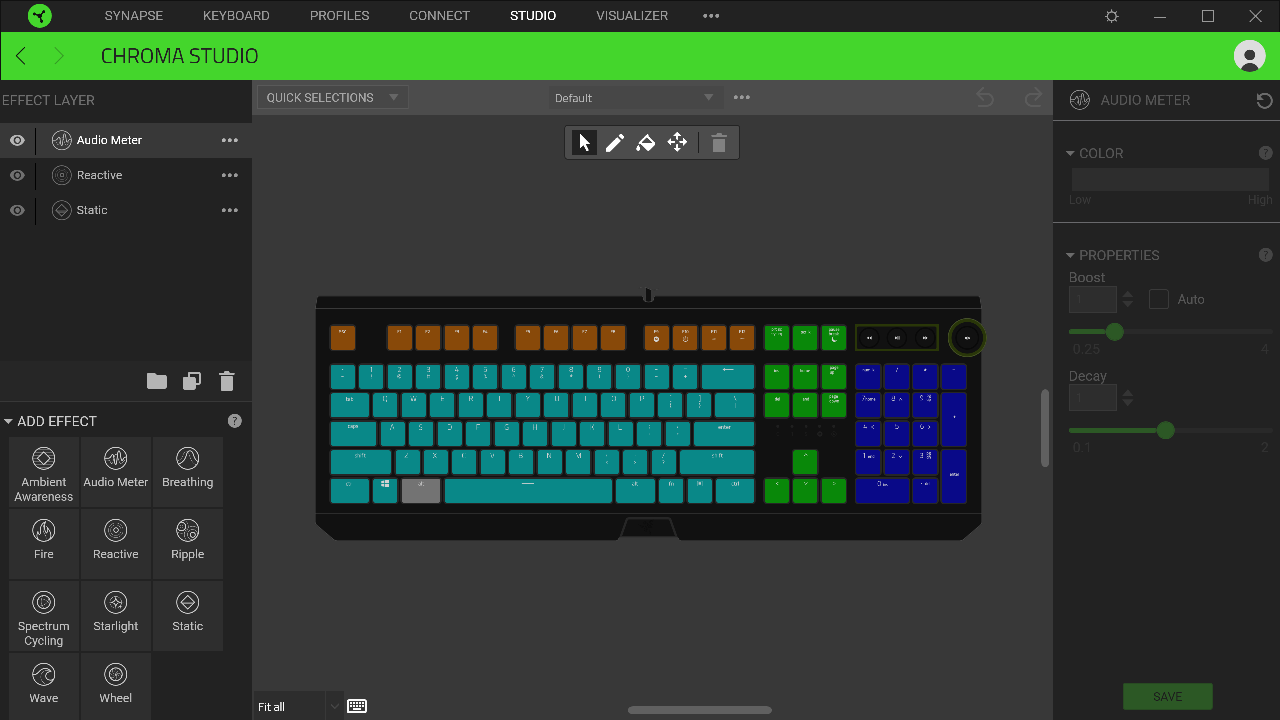 What you have is a clear visual representation of your keyboard's lighting. This image is updated in real time with key presses or fancy features as they're happening; in the screenshot above you can see the Alt key is a different colour because I was holding it to take the picture. My setup for the keyboard is quite a simple one, being fond of block colours. I have effects layered so to give most of the keyboard set colours, and for them to briefly turn white when hit so as to allow me to see if I happen to mishit a key. Aside from this, I have my multimedia keys changing colour depending on how loud the currently playing audio is, really just because it seemed like an amusing feature. Effects are layered like in image editing software, with effects on top given higher priority. For the effect I'm using, I have the flat colours as a static layer, with a reactive white layer blanketing the entire keyboard. If you're a little more adventurous than myself, there's a lot to play with, most of which being animated or reactive. By far the most bizarre of these is ambient awareness, attempting to change the lighting on your keyboard in real time to match the contents of your screen. It isn't perfect and doesn't work fantastically when using the keyboard for day to day activities, but in-game where colours are vibrant and varied, it works really nicely as a base layer to be built upon. A small but important thing to mention with these customisations is that you can store up to four layouts on the keyboard's on-board memory. You do unfortunately still require Synapse installed on other systems to access them, but it makes transferring settings far simpler than it previously has been.

A few minor additions worth a brief mention are the magnetic wrist rest and a cable routing quirk. The wrist rest sits comfortably on the front of the unit and holds itself in place with in-built magnets. It's the kind of thing you put down and don't notice, and I say that in the best possible way. It takes up minimal space, and provides apt support that just lets you carry on typing with very little wear. The cable routing is as simple as having grooves under the keyboard, and three holes for the wire to escape from. This means you can have your keyboard wire extending from the back, the top-left, or the top-right, depending on your particular needs. It's something I'd have never thought of, and something I'd never really look for in a keyboard, but such flexibility is nice all the same. Anything to limit a mess of wires is a positive in my book. 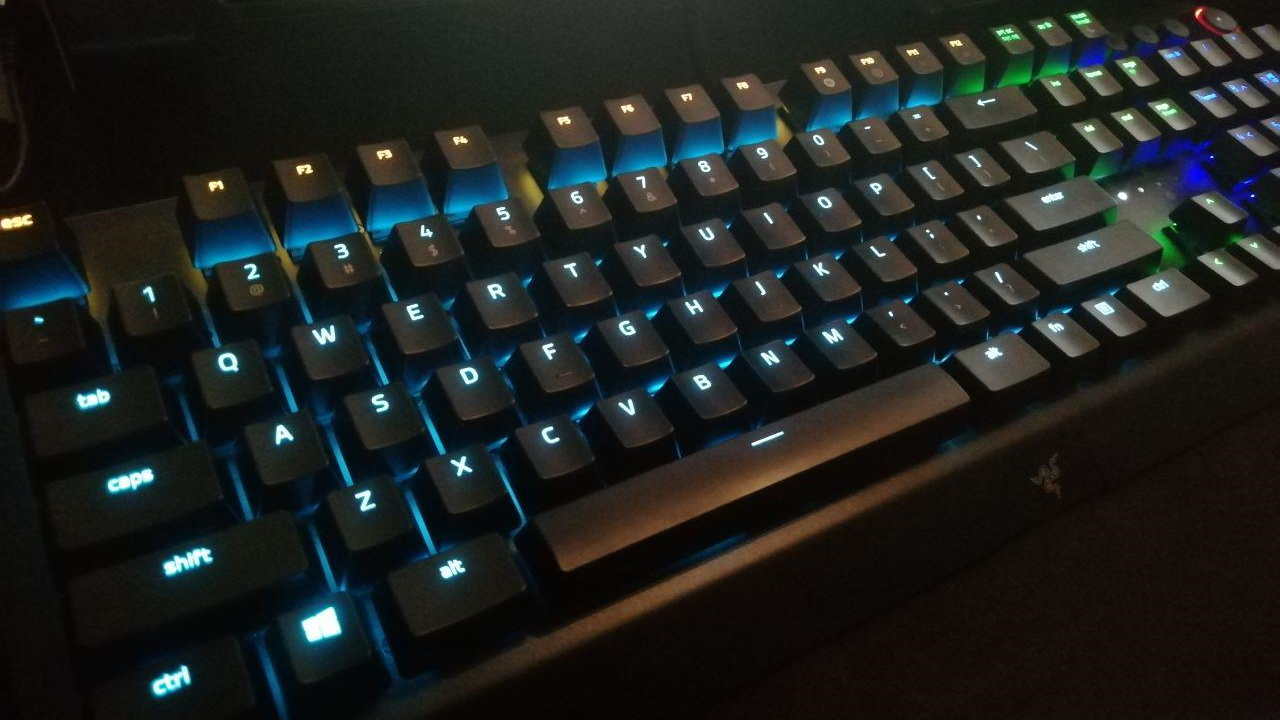 All in all, I struggle to find fault in Razer's BlackWidow Elite. An unquestionable step up from their original BlackWidow Chroma, it's a sleek gaming keyboard with an ample feature set, available in both UK and US layouts, as well as Razer's own Green, Orange, and Yellow switches. Its only real limiting factor for me is its price; at £169.99, it isn't the kind of thing you can really buy on a whim. If you can get past the cost however, you'll have a quality keyboard built to last.

You can find out more over at Razer's official product page, or check out the tech specs below: 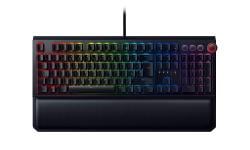