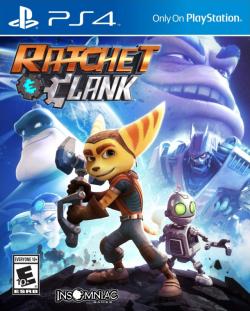 Ratchet & Clank is a game developed by Insomniac Games, based on the upcoming film by Rainmaker Entertainment, which was based on the original R&C game from 2002. Is the series debut on PS4 up to snuff?

When Ratchet & Clank made its debut on the PlayStation 2 in 2002, it became an instant success. The game sold over 3.5 million copies and was praised by critics for its dynamic worlds, breathtaking graphics, and a vast collection of awesome weapons. Since then, the unlikely duo of Ratchet and Clank went on to star in over a dozen more intergalactic adventures, gaining a strong and dedicated following throughout.  Admittedly, not every adventure was a success.  So does the 2016 game based on a 2016 movie based on a 2002 game do the series justice?  Let’s find out!

Ratchet & Clank for PS4 is a reinterpretation of the original game, as told through the larger than life Captain Quark.  As a result, this game is a great starting point for new fans of the series as it is the first game chronologically.  You don’t have to know a single thing about these characters beforehand.  That said, this game was made in conjunction with the animated feature film that’ll hit theatres later in April, so you may want to check that out as well. This version of the game brings a lot to the table, including stunning HD graphics, a vast range of characters, and humor suitable for kids and adults alike (there’s a character named Skid McMarx…  SKID MCMARX!) The updated graphics came at a cost, however.  The game runs at a solid 30 FPS to compensate for the intense graphics, but honestly, it’s no big deal.  The controls are still tight, the camera pans quickly, and reactions still feel fast.  The most snobby of critics may find playing a game that runs any less than a constant 60 FPS appalling, but the average gamer is more likely to just appreciate the beauty of the game.

Right from the get-go, we’re thrown into a colorful, high-octane adventure of galactic proportions. The plot that drives the story is told both during the cinematic cutscenes and while adventuring, seamlessly mixing the story and the gameplay together.

The action sequences, while occasionally short, flow on without the slightest hitch and there are many planets to explore and find collectibles in.  Collectibles include gold nuts and holo cards which can both be used in various ways. The game starts you off with the traditional hand gun, wrench, and a set of grenades, but weapon selection evolves quickly to contain far more than that. These weapons are just as fun to use as ever, and the fan favorite ‘Groovitron’ is back and better than ever!  With it you can force your enemies to groove like there’s no tomorrow.  Literally…  Because they die.  You force them to dance to their deaths.  You’re a monster. Weapons that force enemies to dance and transform into sheep are typical of Insomniac, but that doesn’t make them any less entertaining after all of these years. Ratchet & Clank has a certain RPG element to it.  Like previous Ratchet & Clank games, but unlike in the PS2 original, you can upgrade your weapons through multiple uses.  During your first playthrough you can only rank your weapons up to level 5, but once you unlock challenge mode by beating the game you can rank them all up to level 10. This, along with a truck load of collectibles to collect, helps to make up for the game’s relatively short length.  Somebody who wants to just charge through the story can beat it in about 10-12 hours, give or take.  That’s my major complaint, I wish that the game’s story was longer.  However, if you’re someone like me who wants to stop to smell the roses, gather all the collectibles, complete all the missions, level up all of your guns, play on the hardest difficulty, and get that precious platinum trophy; it can take quite a bit more time.

When it comes to reimaginings of older games, you win some and lose some.  Where they added planets and objectives in some cases, they also removed some beloved planets from the original game – probably due to time constraints or a desire to streamline the experience.  That said, this game still has every environment imaginable.  Green pastures, volcanoes, skyscrapers, frozen tundras, deserts, you name it!  At any rate, the omission of those planets might be a turn off for some gamers who feel they won’t be getting the full experience.

Throughout the game I wondered who the target audience really was.  By the end I concluded that both young and old can enjoy the game and that it’s targeted to both.  Much like Pee-wee’s Playhouse had humor obviously meant for kids, mixed with subtle humor meant for adults – Ratchet & Clank continues its tradition of cracking jokes that make kids smile and their parents wink knowingly at each other.  The game can be simple enough for children to play (remember that it’s rated E10) on the easiest mode, but even trained adult gamers can struggle on hard mode, especially searching for all those precious collectibles. To end on a high note, let me bring up my absolute favorite thing about the game…  its price.  While most AAA titles today - especially with names as big as Ratchet & Clank – retail for $60, Insomniac made the decision to sell this one at only $40.  It isn’t this price because it doesn’t hold up to current standards, I would actually argue the contrary and say that this game meets or exceeds the standards of many games today.  The official reason that the game is $40 is simply because the original game was $40 and Insomniac wanted to honor that price.  Whatever the true reason is, I truly believe that this game is a great value and that Ratchet & Clank veterans and newcomers alike should give this title a shot.

At the end of the day, it's hard not to fall in love with the new Ratchet & Clank. Leave it to Insomniac to maintain what made the original game so amazing 14 years ago, while still adding a modern twist to attract a new generation.

As the plumber would say, see you in the next reboot!