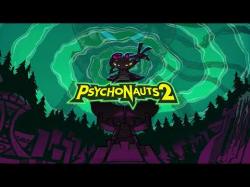 Single player
Local Multiplayer
Online Multiplayer
Co-operative
Raz is back in Psychonauts 2! After the 2017 VR spin-off, we finally get a traditional platformer title for new consoles and PC. Has the wait to get back into people’s minds been worth it?

Welcome to the life of a Psychonaut, where as an elite agent gifted with psychic powers, you’ll embark on missions by venturing into the minds of people where emotions and imagination materialize. It’s the life that Razputin "Raz" Aquato dreamt of and finally achieved it by making his way into the Psychonauts organization… only to learn that he’s been taken in as an intern.

But no time to dwell on these technicalities as a greater threat lurks in Psychonauts HQ. After Truman Zanotto, the grand head of the Psychonauts, was kidnapped and rescued, it became evident that a mole hiding in headquarters orchestrated the coup. What’s more, an underground group is trying to bring back the powerful and murderous psychic Maligula back to life. Are these events connected somehow? Only one way to find out: don your psychic goggles and explore the minds of suspects, victims and allies! 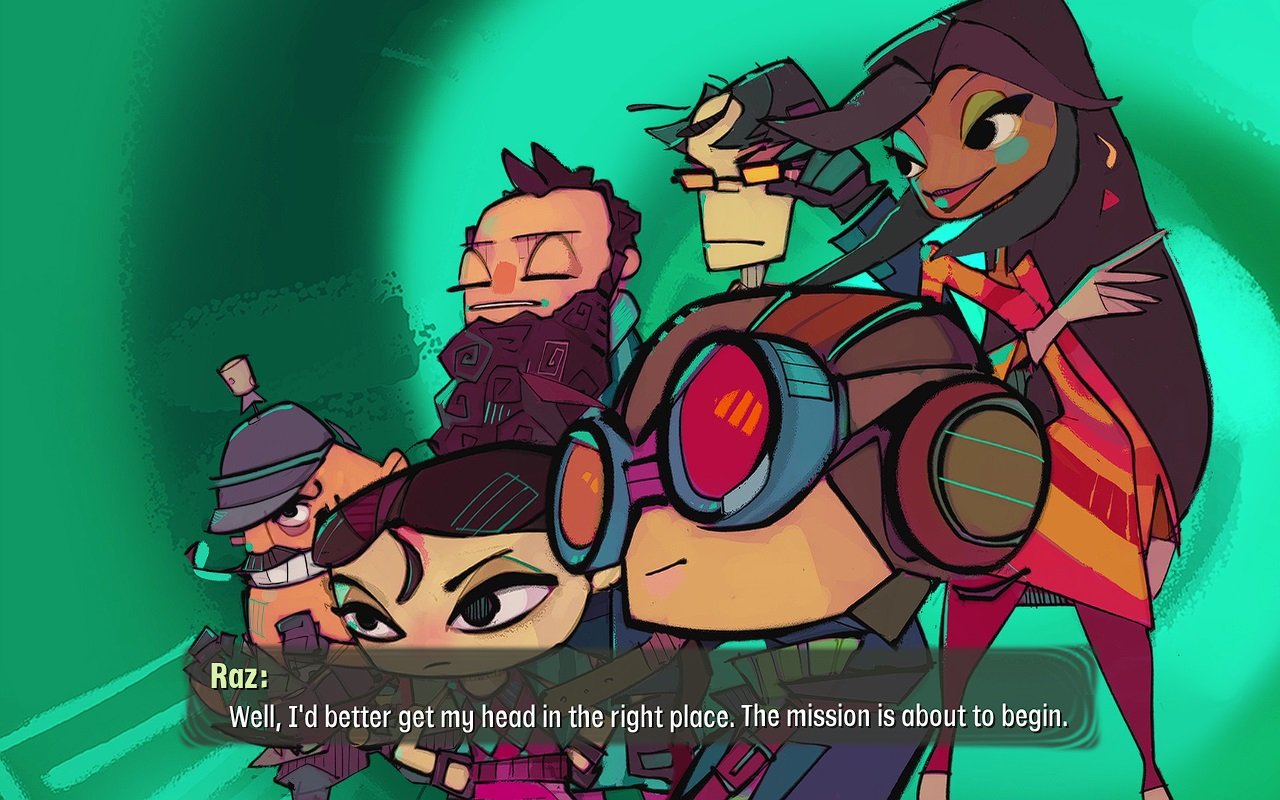 Those waiting for Raz’s grand return: rejoice as the wait is over! Psychonauts 2 brings back the iconic protagonist in a new 12 hour+ adventure that, although mostly comedic in nature, tells a touching story of people needing to make peace with their past and helping them do so. Newcomers to the Psychonauts franchise can also easily pick up this title as the plot and setting are totally new and past references aren’t so disorienting. But fans of the first opus will find familiar aspects thanks to recurring characters, Raz’s psychic powers, and creations straight out of Tim Schafer's trippy mind. And boy is it trippy!

Exploring people’s minds will lead to sub-mission after sub-mission that are successively over-the-top. Fetching a new brain for your newly-brainless mentor leads to a mission to reconnect an old band. Helping a fellow Psychonaut ends up in collecting evidence in books, in 2D. You’ll roll across a germ-filled city on a bowling ball, explore buccal cavities and even climb a cake. Not to forget that you’ll also get to prepare dishes in a competition, play pinball so as to get a pill to the stomach, and match words to make new connections in someone's mind. I could go on as levels in Psychonauts 2 are extremely colorful (literally and figuratively) that all share some of that distinctive Psychonauts trippiness and it's all in good fun.

Those unique settings aren’t only visually striking but are brought to life by the NPCs that populate them. Talking to them flesh out the universe and as well as those character’s own individual personalities. 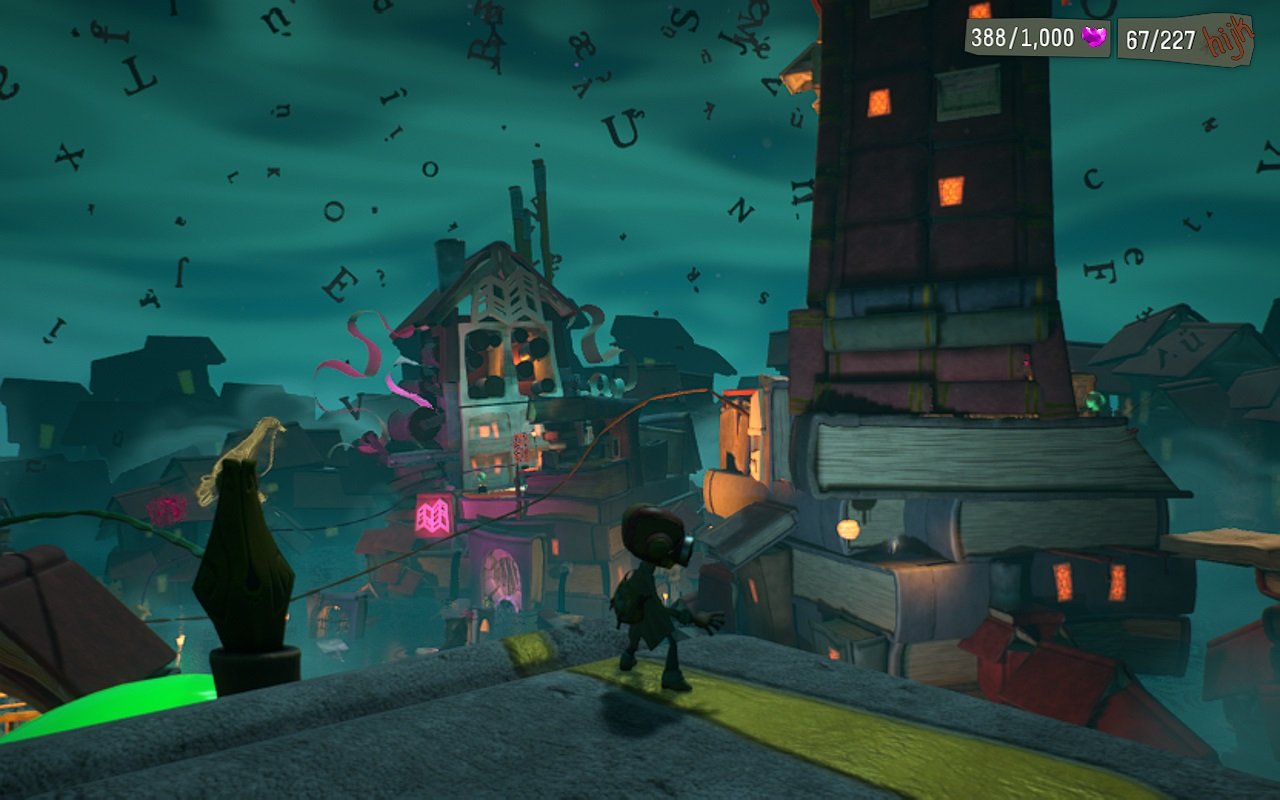 In this way, Psychonauts 2 overtly shows that every mind is unique. Each level and sublevel presents mechanics of their own that break any sense of monotony, mixing puzzles based on one’s imagination and pitting you in battles as emotions materialize as enemies. The amount of diversity in its missions reminds me of It Takes Two and if you liked that game, you’ll find much to like in Psychonauts 2 as well.

To fight enemies and solve puzzles, you’ll have access to Raz’s PSI Powers which range from summoning a giant hand to grab/throw items to seeing through the eyes of others with Clairvoyance. You can map 4 of these for easy access to the shoulder and trigger buttons (one power to each) and you can also upgrade and tweak those PSI Powers to gain an edge in battles. The latter are quite varied, given the different types of emotion-enemies you’ll face which are each more vulnerable to certain types of attacks. This adds a layer of fun as the ways you can tackle battles are left up to you and your preferred style. 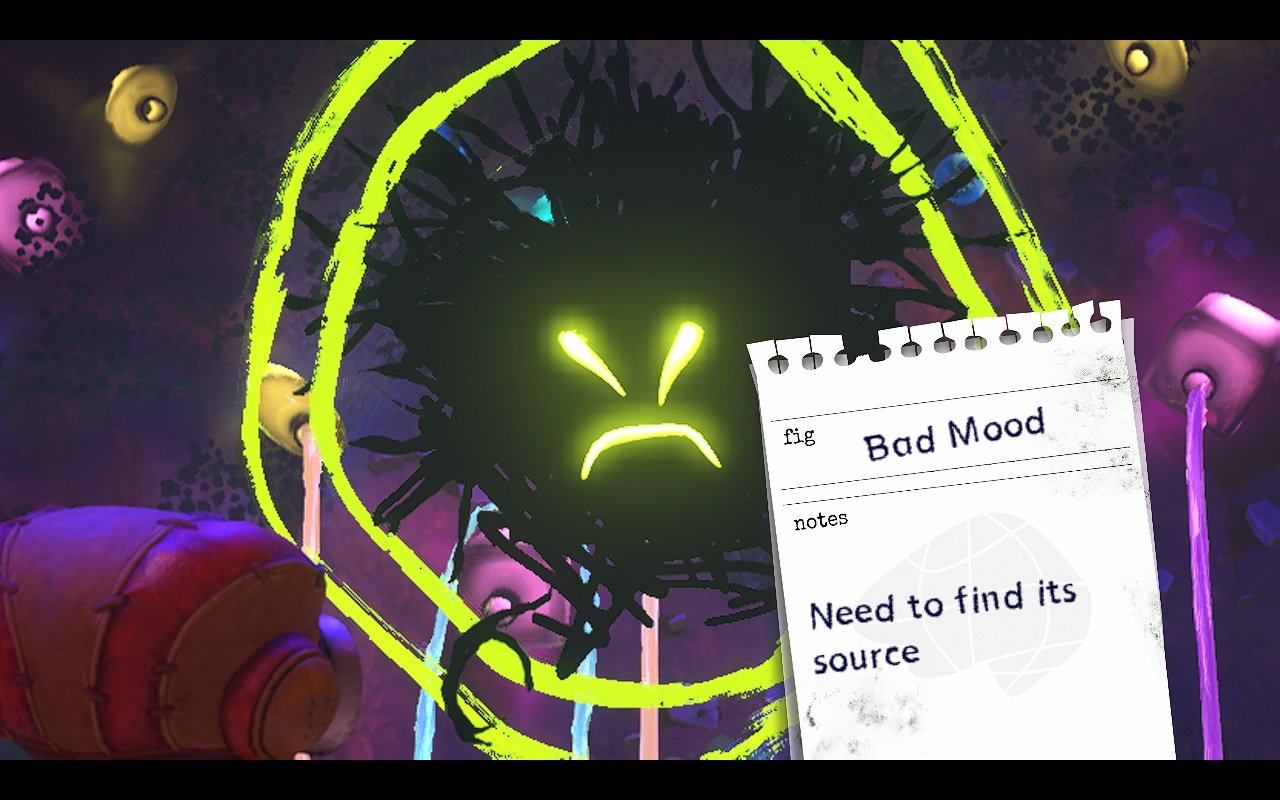 What I found less fun in Psychonauts 2 is that it occasionally suffers from the need of precise platforming maneuvers. For example, in the bowling level, you would progress while rolling on top of a bowling ball but would still need to go on tight spaces and time your jumps; you could easily fall while attempting those and as such needed some getting used to.

Another gripe I’ve had is that you’ll have to keep your eyes peeled for the Y button prompt that will tell you that you can use an item to proceed. This is not always very obvious as these items often blend with the environment and are mandatory to use in order to proceed.

I’d also point out that certain levels have some questionable humor; one that stands out involves a whole lot of retching in a boss fight. You’ll also have to forage into those regurgitated matter for “ammo” to fight back. If it weren’t for the cartoony artstyle, I don’t think my stomach would handle it as well (I was already not feeling so great with the cartoon depictions). 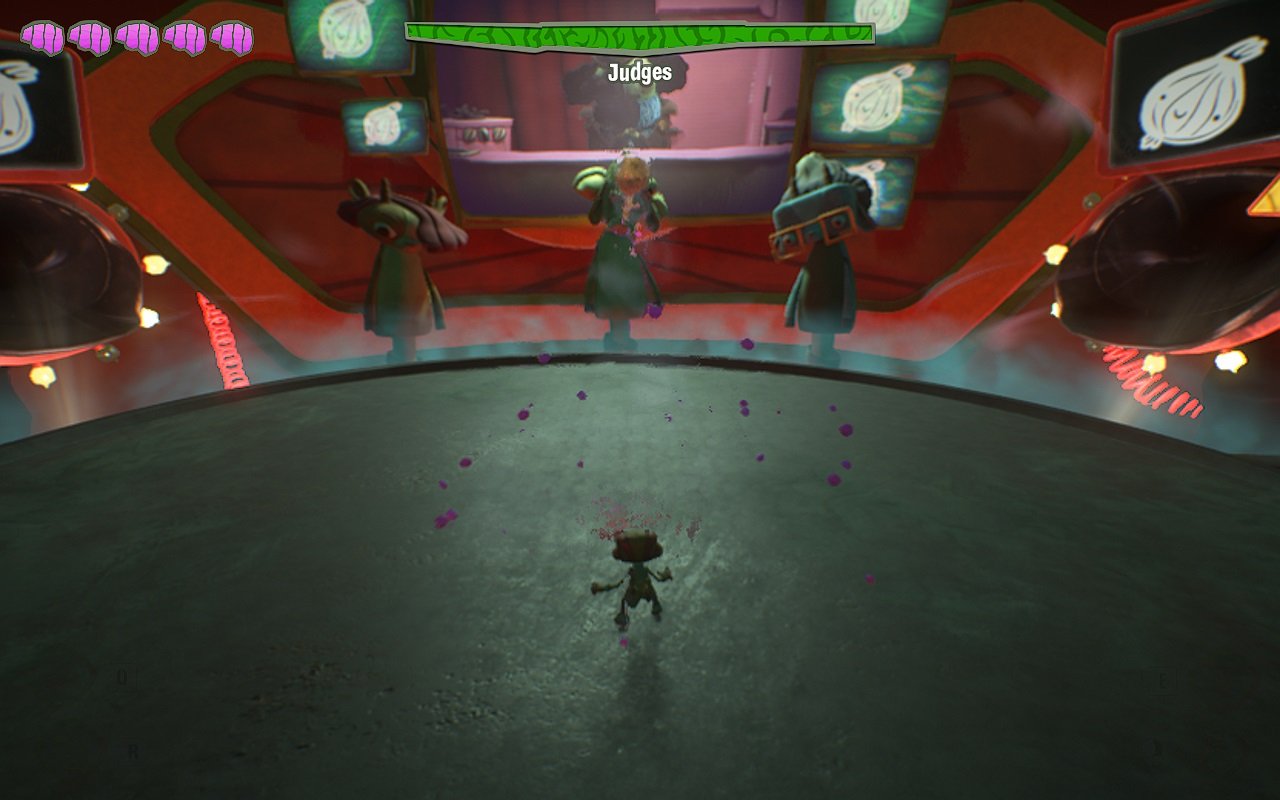 Those gripes aside, Psychonauts 2 is, overall, a feel-good game that indeed makes the wait worth it. Its characteristic art style and trippy levels will surely leave a lasting impression.

What We Liked ...
What We Didn't Like ...
8
Gameplay
Each level present mechanics of their own that break any sense of monotony,
9
Presentation
With levels fleshing out the imaginative minds that you visit and giving each a trippy twist, Psychonauts 2 leaves a lasting impression.
8
Lasting Appeal
With the amount of variety that the game offers during its 12-ish hour duration, it’s easy to stick to it.
8.5
out of 10

Raz makes a triumphant return in Psychonauts 2 which delivers a great time in trippy minds.
Reactions: Payne, MarKSlasH, AHB and 14 others
Share:
Facebook Twitter Reddit Pinterest Tumblr WhatsApp Email Share Link
I am so happy that this review is so positive. It probably means that I'll end up rating it much higher in my own personal review.
Reactions: Payne and Cortador
Wait, this is out? I need to get a license!
I recently replayed the first one and then immediately jumped to the second game, and MAN I can't believe they kept the exact same art-style(with some HD sharpening, if you know what I mean) AND brought back ALL the voice actors to reprise their roles, who nail their roles exactly as they did before(pretty sure they were brought back to record for that game and the VR game at the same time. might be wrong..).
More sequels of games from the PS2 era need that kind of approach.
Reactions: slaphappygamer
Sounds very similar to the first. My only real complaint with that one was the controls couldn’t keep up with the level of platform precision required in the last few levels. The level design and storytelling were incredible though.
Reactions: Payne
i got this on my ps5 recently, have been taking my time playing it.
totally has some collectathon elements to it if youre into achievement hunting.
im nearly finished with the game and recommend it to anyone who has played the first one.

aside from some performance issues (major lags in some areas even on ps5) its a great game.
not perfect but the voice acting is super entertaining, like im watching a $60 cartoon for 14+ hours that i also get to play lol

graphics are good and humorous, can be very cartoony at times.
voice actors from invader zim are in it
Reactions: MarKSlasH
>Some levels with questionable humor

But that's a good thing.
Reactions: Payne, AHB, The_Provider and 2 others
One of my favorite games of the Year Here ! i might have to give the VR a go this weekend
Reactions: Payne
Glad it was a good sequel. Too often this long a break between games does not end well.
Reactions: Payne and slaphappygamer
im glad the game is as good as it looked like it was going to be.
.
I’ll have to get this for my pc. Seems like it’s right up my ally.
I guess I'll get it
Reactions: slaphappygamer
I started playing it. The professor sasha reminds me of the scientist from invader zim

Also the mean kid reminds me of the sister of zims antagonist
I have been waiting for this game since it was announced in 2015. The first one was one of my all time favorite games. Being a professional artist for over 20 years I know what it's like to have to draw the same boring shit because some desk jockey is afraid to try something different. I know how hard it is to pitch something that is so out of the norm. But when you get the right talent, the freedom to do what you want, and you are VERY lucky, well sometimes you get a rare gem. If you're on the fence about trying this game I recommend giving it a shot. the amount of content is crazy. pun intended.
Reactions: MarKSlasH and Prans
If you can afford it and have the darn thing, the Xbox Series X version of the game is the best one.
I’m glad they kept the original art style so well in this game, It looks great. I have yet to actually finish the original so maybe this will give me enough motivation to go back and finish it one day.

Matthew_S said:
I’m glad they kept the original art style so well in this game, It looks great. I have yet to actually finish the original so maybe this will give me enough motivation to go back and finish it one day.
Click to expand...

Remember to collect all the brains and upgrade all the powers because you are gonna need it for tbe last fourth of the game.