The sequel to the 2016 indie cult classic is here! But what exactly has Dry Cactus brought to the table with this new installment? 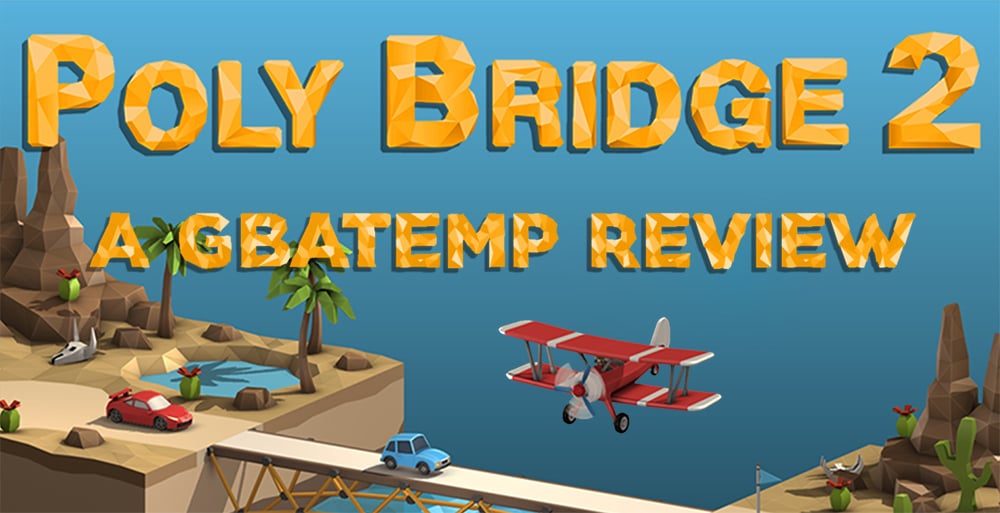 Let me start this review with a controversial fact: I have not played the first Poly Bridge. While working on this review, I was about to purchase the first game just to get a better understanding as to what exactly Poly Bridge 2 improves upon, but after viewing a copious amount of gameplay of the first game, I "understood" the mechanics of it. That is, I realized not really much is different in comparison to what I saw while playing Poly Bridge 2 - the same mechanics are there, controls are identical, the soundtrack sometimes feels like it's even in the same key, and yet it is still a new game.

Poly Bridge 2 doesn't stray away from the formula that made its predecessor a hit, being a deceivingly simple game where you build bridges that need to be tested by various means of transportation. It doesn't have a 'plot' per say, but a campaign mode with 64 new levels, it doesn't have a voiced MC, no AAA orchestral soundtrack, no RTX support - and it doesn't really need any of that. What Poly Bridge 2 does have is improvements - a better designed UI, new mechanics, an improved physics engine, new transport, and SPRINGS! . The game overall has more of a "professional" presentation compared to the 2016 version.

The main goal of every level in Poly Bridge 2 is to build a bridge that can function under given conditions - having transport successfully cross the bridge, sometimes going through certain checkpoints, also having other objects like ships or air balloons go through/under the platform without damaging structural integrity. Different materials are given to you, such as wood, roads, reinforced roads, steel beams, rope, steel cables, hydraulics, and springs - which are a new addition to this game. They allow you to cushion vehicle landing in later levels. 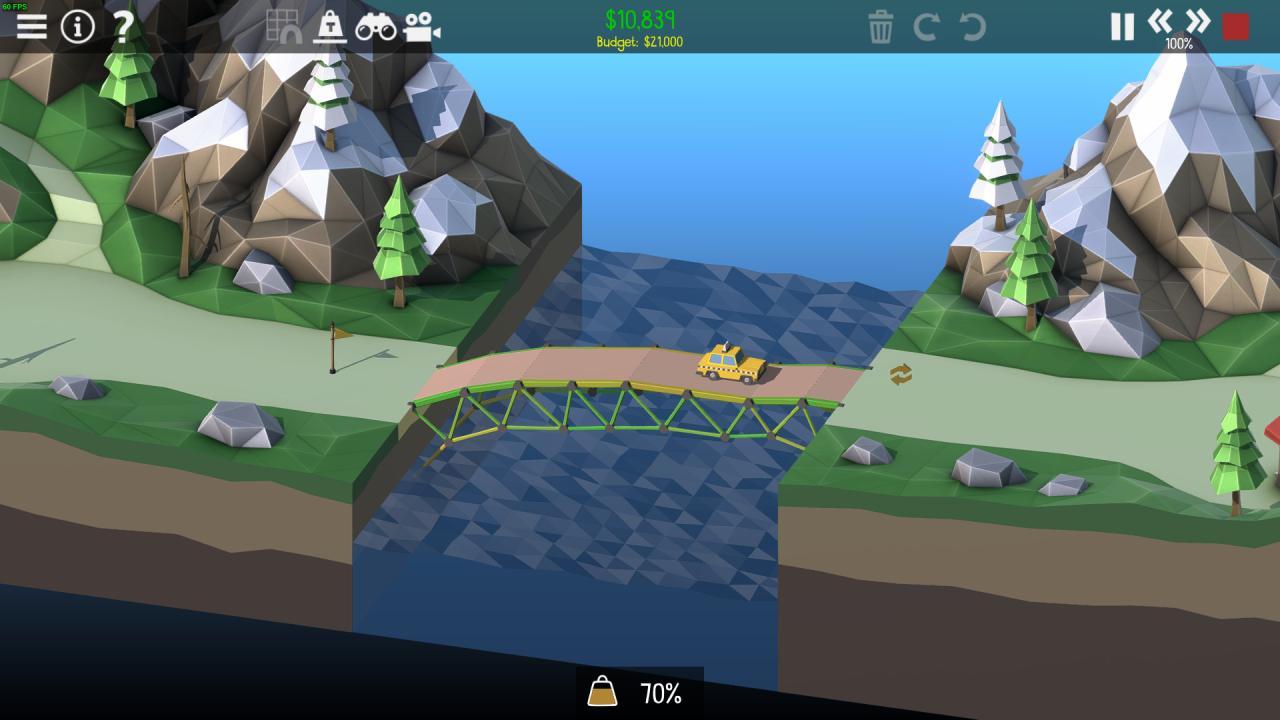 As you progress through the game, you unlock more materials.

Of course, you can't just build a bridge that's supported by thousands of steal beams and cables, since that would make you go over budget. This is where the game truly shows difficulty, reflecting the capitalist reality of modern engineering. Sometimes, you create the perfect design for your bridge, one that can handle stress at any capacity, but it's $1,000 dollars over the given budget. I'm sorry, how am I expected to build a bridge with hydraulics for under $24,000 dollars? Even in Ukraine that's not enough to build a bridge. So you try cutting corners. Maybe remove a bit of wood here, trim some cable off there, and you expect it to work at least just as well. It collapses instantly. The car didn't even get on to the bridge yet. It just breaks down like my personal life.

Poly Bridge 2 is a fair game in terms of difficulty, as it tries to engage your inner engineer and sparks your creativity. There's absolutely more than tens of ways to solve every level, with the game even showing you designs from other players once you've finished the level. It also shows how much money they spent. Leaderboards in Poly Bridge 2 are now verified, which means no longer will you see people in the top positions with hacked 24 dollar bridges - a great improvement, in my opinion. This will stimulate the community to create really cool and innovative designs in the future.

By the way, you don't need to be right in your budget to finish a level. In fact, you don't even need to finish a level to progress to the next one. You can jump right into the final challenge if you wish to. Depending on whether or not you're in budget, if you completed the level, or if the bridge breaks in the process, you get an icon near the level you completed in the list. Poly Bridge 2 is a game that you can play casually, which doesn't deter it from being a fun, good, and engaging game you will spend hours in.

There's also a sandbox mode - sort of a level-creator, where you can create really any type of course you wish. Steam Workshop support is implemented here as well. This means, that even after finishing all levels you can still play ones made by other users, or even publish your own. A new addition as well is a cool streamer mode, where viewers on Twitch will be able to edit your bridge in real time! I haven't tested this because nobody watches my streams anyway. 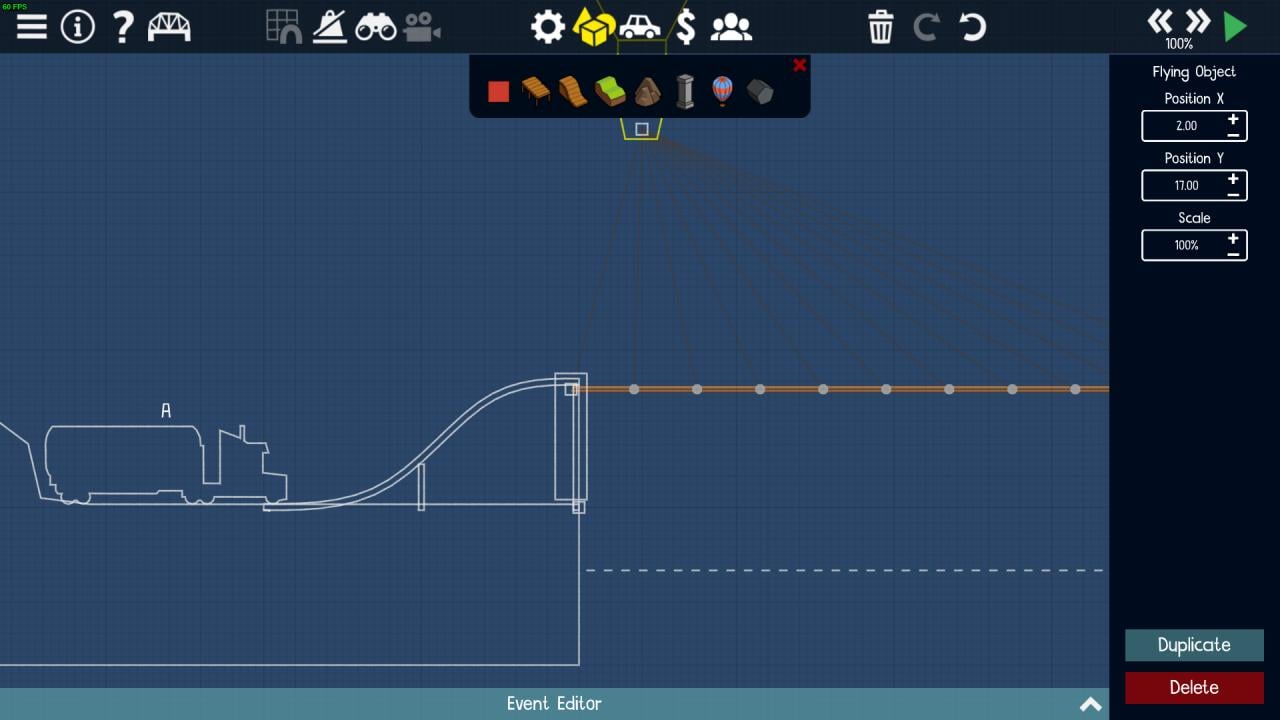 You can also share your attempts at crossing bridges, be it successful or not, through the built in sharing system.

Poly Bridge 2 doesn't stray off far from it's predecessor in terms of sound design. The game has an easy on the ears soundtrack with an acoustic guitar being the central piece in most of the tracks, with some soft synth pads appearing occasionally, as well as some chimes and bells. I think I heard a banjo once. If you wish, you can turn off the music in the game and play your DOOM Eternal soundtrack, or whatever you'd prefer listening to while constructing bridges.

Poly Bridge 2, with it's low polygon count design, is unsurprisingly well optimized on PC. I did not encounter any FPS drops, with a stable 60 across the board. I'm not Digital Foundry, but I can safely say you won't be experiencing any hick-ups with this game. Still, I don't know how, but Poly Bridge 2 looks "better" than the previous game. I think it might be the lighting, or something.

The game's requirements are the following:

Poly Bridge 2 is a calming, relaxing and fun game. It's aesthetics, presentation and sound design is tailored for gamers seeking an intellectual challenge while not being on the edge. If you're deciding between Poly Bridge and Poly Bridge 2, buy this one - it's practically a more polished, improved version of the original, with more features. It is more of a puzzle game with simulation elements rather than Serious Bridge Builder Simulator 2020, and I like it that way. I recommend it for both new players seeking a fun high IQ game, as well as fans of the original.