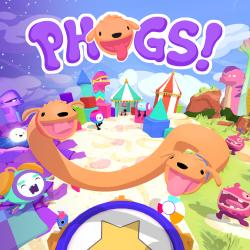 Remember couch co-op? It's back! In Phog form.

Multiplayer games have begun to feel more and more isolating lately. The rise of online gaming means that, although you're playing with other people, you're still often by yourself physically, just keeping your screen to yourself. Most local multiplayer games like Mario Party or Mario Kart are renowned friendship destroyers, and even ostensibly co-operative games like the New Super Mario Bros. series or Overcooked! seem designed primarily to make you and your friends scream at each other. There's a place for that, but it's nice to find a game that tries to create a more relaxed mood that let you and your partner unwind and work together. Phogs! provides this relaxed mood in spades, not only from its core gameplay mechanic, but from the work done to make the environment as playful and adorable as possible. 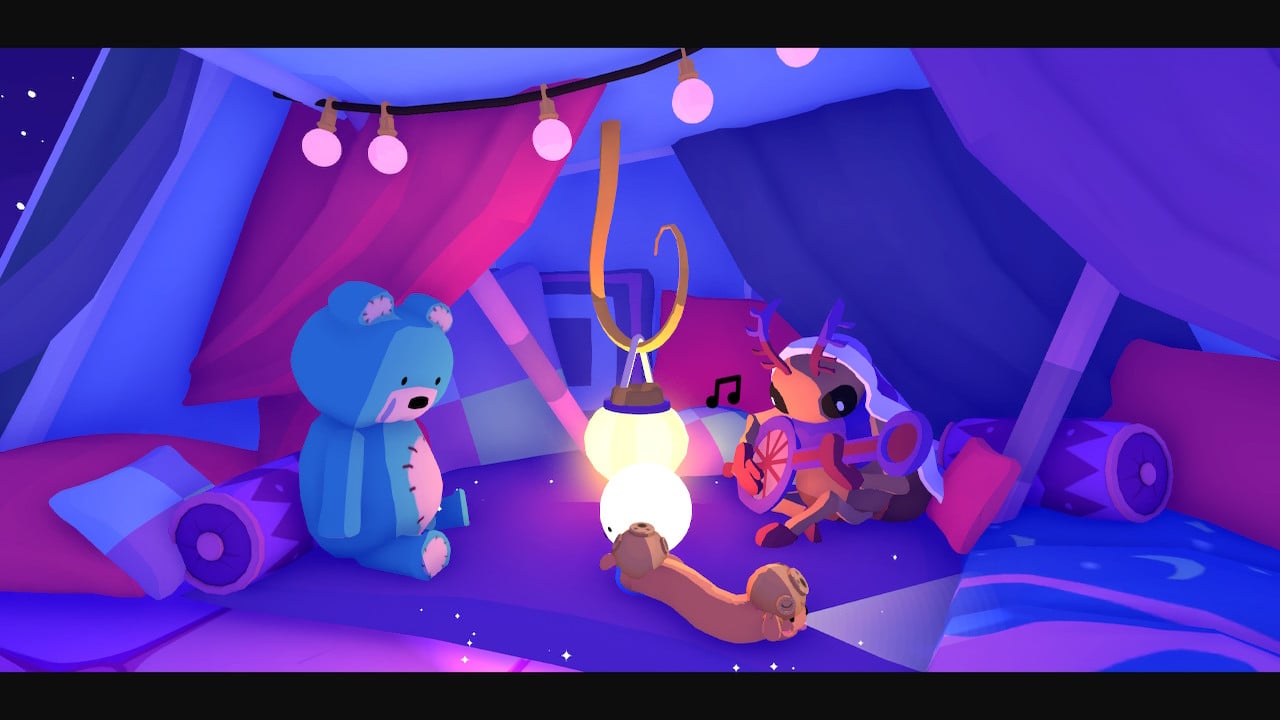 Phogs! stars Red and Blue, two dog-headed creatures, connected by a long, stretchy, snake-like belly. While that sounds horrific, the natural charm of dogs completely negates how upsetting this creature should be. Red and Blue slide around their world with big grins plastered across their faces, excitedly searching for their next objective. When you try to grab an object, they happily bounce and chomp at it, making little arf sounds. Their attitude is likely to infect the player as well, especially if they've got a friend to explore with. Since Phogs! drops you in without much direction, you naturally just start trying things and see what happens. For example, before we even reached the tutorial area, my partner and I became consumed with a beetle scurrying about the hub world. We chased it, bit it, tried to wrap ourselves around it to ensnare it in our snake belly. Shortly afterwards, we came across a bone and, immediately recognizing it as a collectible, bolted towards it. Because there are so few controls, our first instinct was to mash the jump button, which also happens to be the bite and bark button, meaning we were barking our heads off while hopelessly trying to climb the wall. Without discussing it at any point, we were essentially role-playing as over-excited puppies.

That cute, playful side doesn't only come from the player characters, but the environment and side characters as well. The art style, with its bright, basic colours and lack of detail, makes you feel like you're playing a children's book. But there are still some gorgeous visuals that come out of it. The sleep world in particular uses a purple tint over everything that creates this gloomy, dream-like feeling that's really beautiful. The side characters are given equally simplistic designs, but they still work. Food World, for example, is populated by weird creatures with oversized limbs and doofy grins, some of whom will give you pets. Even the ones that give optional objectives have a tender side to their stories, like the warring farmers whose feud is ended after Red and Blue steal vegetables from their gardens to give to the other as a peace offering. 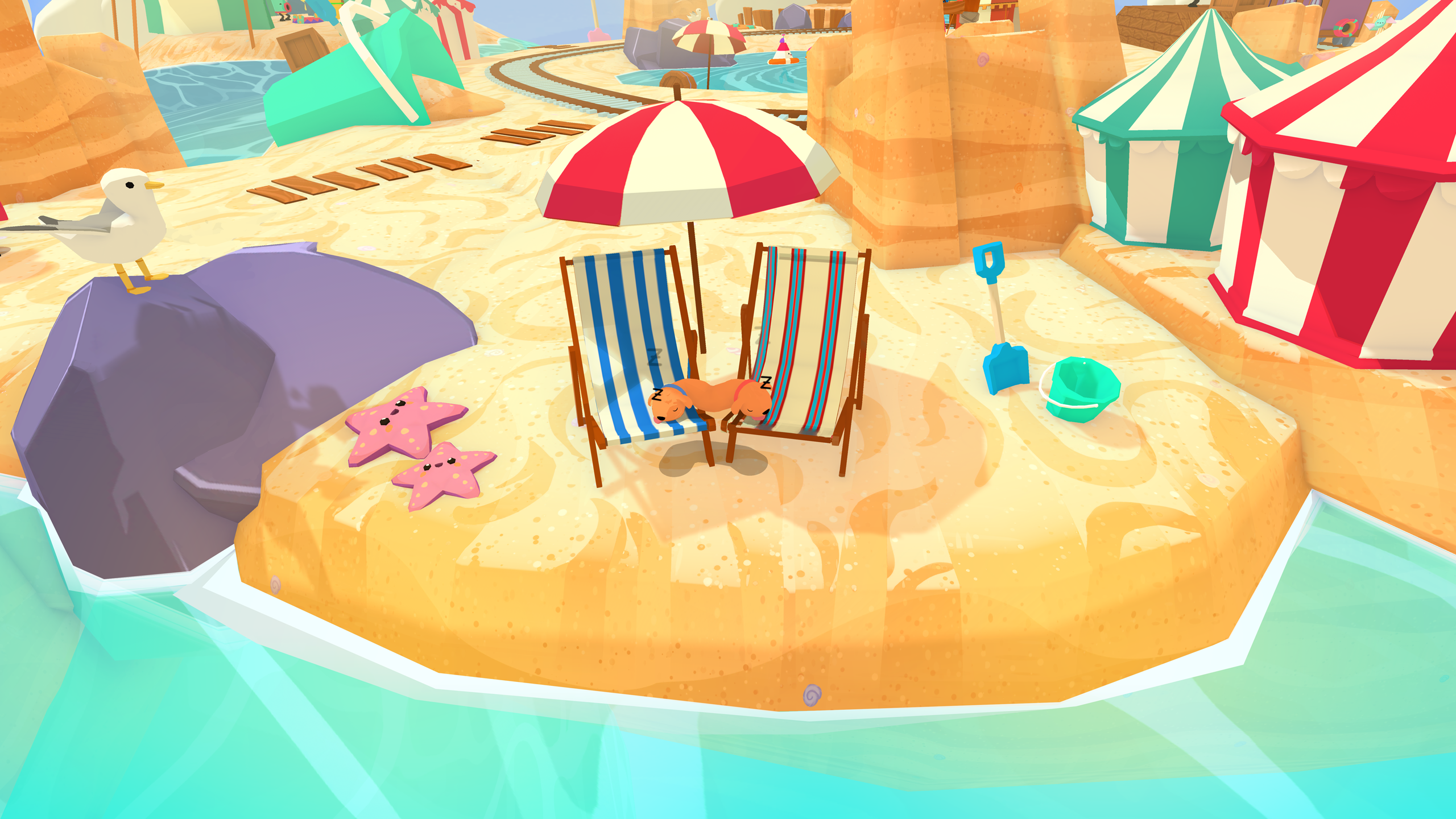 This charm is key to why the puzzles work despite being so easy. There's nothing wrong with them exactly, in fact some are quite clever, but since Phogs! is an all-ages game, they're not particularly challenging. There may be a few that cause you to stop and think for a minute or two, but nothing that will really work your mind too hard. However, the levels are fairly short and introduce new mechanics regularly enough to keep you engaged. The level of difficulty is perfectly balanced to stop the puzzles from becoming a chore, but also to allow the carefree feeling to continue unabated.

Unfortunately, much of this charm is also reliant on having a partner to play with, so the single player mode heavily suffers. When playing solo, your controller is split down the middle vertically, so the left half of the controller controls Blue, and the right half controls Red (in fact, the tutorial even suggests that if you only have one controller, you could play with a partner by holding one half of the controller each). The controls work well enough, but I never managed to get it to feel natural. Years of videogame muscle memory have ingrained in me to not walk with both analog sticks pushed in the same direction, or that the right trigger is traditionally the attack button, so I often wound up letting go of whatever Red was holding when I meant to grab something with Blue. These are all stupid mistakes on my part, and they were easy enough to fix, but it was still annoying enough to interrupt the flow I had when playing co-op. 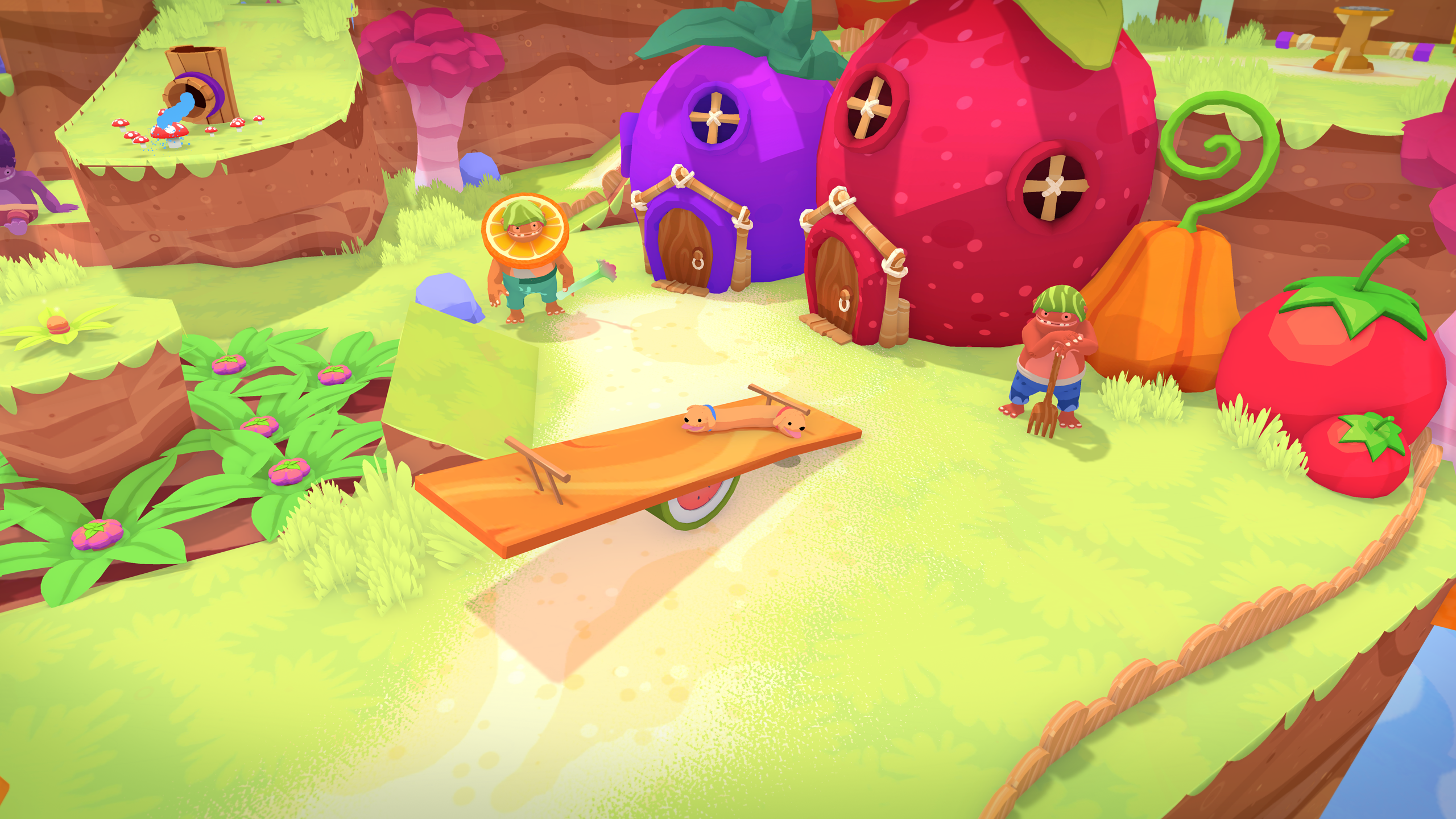 More important than the controls, however, two-player mode is better simply because you need a partner to help find the silly, playful mindset this game instills in you. Where a solo player may be more focused on completing objectives, co-op players are more likely to simply engage in silly behaviour or explore unimportant details in the environment to amuse their partner (the constant communication that comes from being stuck together also helps facilitate this). In this sense, Phogs! reflects a dog's own play time. On its own, a dog can occupy itself for a little while, but will eventually go looking elsewhere for attention or games; put two dogs together, however, and they can endlessly exhaust themselves with hours of sweet, good-natured fun.