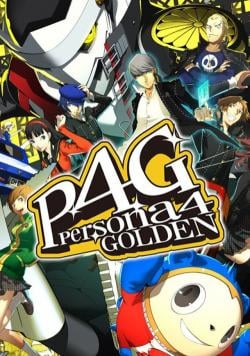 After eight long years, Persona 4 Golden has escaped the grips of the PlayStation Vita, making it the first Persona game to officially be playable on PC. Here's why you should give P4G a chance.

Persona is a series that drastically shifts tones between each release. Persona 3 is edgy and depressing, Persona 4 is upbeat and exciting, and Persona 5 is angry and rebellious. Between the three, though, I think the winner is clear when it comes to the overall feel. Persona 4 Golden is the perfect mix between cheery optimism and a gloomy pessimism. It has, in my opinion, the best mix between the social and gameplay aspects.

As a sequel to Persona 3, it improves in leaps and bounds. In comparison to Persona 5, I'd choose Golden in a heartbeat. The way I see it, Persona 4 Golden has gameplay that feels like a means to tell an engaging story, whilst Persona 5 has a shallow story for the sake of sleek gameplay. 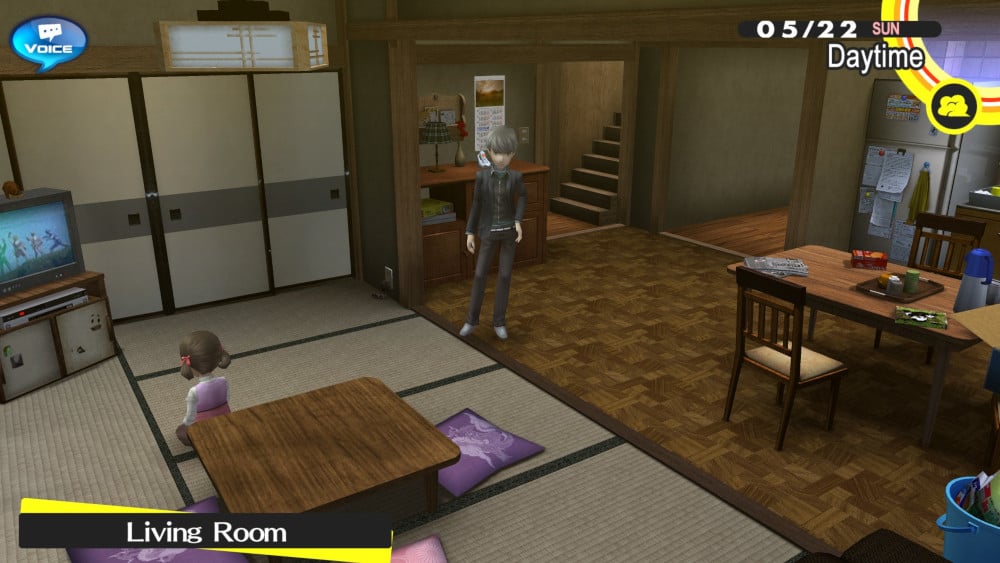 Persona 4 Golden foregoes the common RPG trope of ‘saving the world’, instead opting for a smaller-scale story. The protagonist arrives for a year of school in the rural countryside, but is shortly caught up in a mysterious series of twisted murders. At midnight on rainy days, the warped Midnight Channel appears on TV, featuring the corrupted and perverse thoughts of kidnapped local residents. After appearing on the Midnight Channel, the star is shortly found dead on a foggy day—that is, unless you save them. You and your friends discover a special ability—touching a television allows you to phase through the screen, leading to a foggy world filled with murderous shadows. This is where the Midnight Channel is made, and it's up to your Investigation Team to save lives, and to discover who is behind it all. 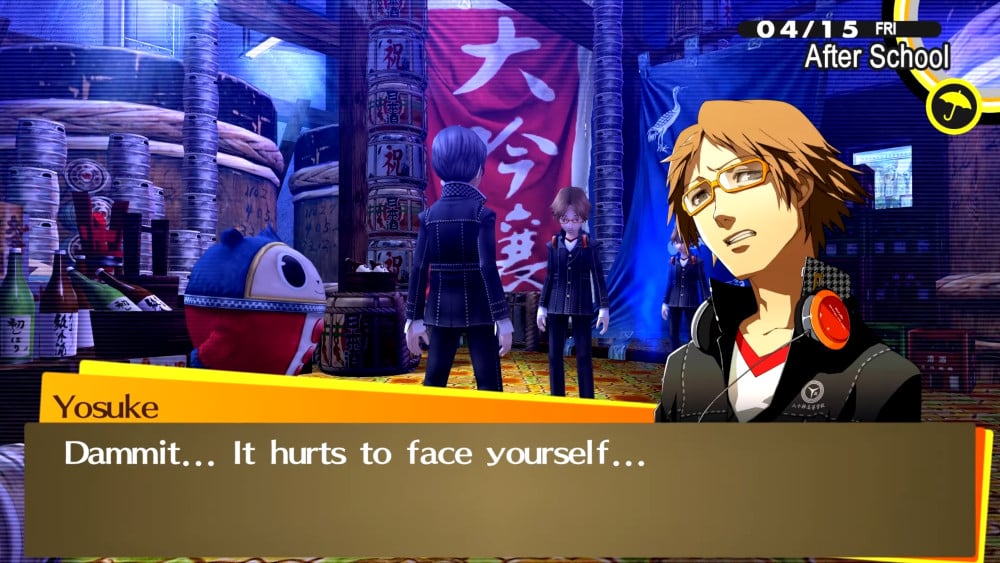 Persona 4 is ultimately a story about accepting yourself. This theme is evident from the start, when you first investigate the Shadow World. Your new friend, Yosuke Hanamura, meets a version of himself created from his own distorted conceptions of reality. These creatures are known as Shadows, and only by accepting them can one be at peace, and awaken to the power of Persona. This theme carries on throughout the experience, most notably with two characters, Kanji Tatsumi and Naoto Shirogane. Both of these characters must accept some deep truths they hide from themselves. Whilst I really don't agree with some of the aspects of Kanji or Naoto, it certainly solidifies the overall theme of self-acceptance.

I'm writing this with the assumption that those reading it have not played Persona 4 Golden before—perhaps you've played Persona 5, and you're interested in some of the earlier games in the series. After all, Persona 5 seemed to blow up in the West. With this assumption in mind, I have to be straight with you—Persona 4 Golden is nowhere near as stylish when it comes to battle as Persona 5 is. But, as I mentioned at the start of this review, Persona 4 makes up for it with far more interesting characters and an engaging plot. 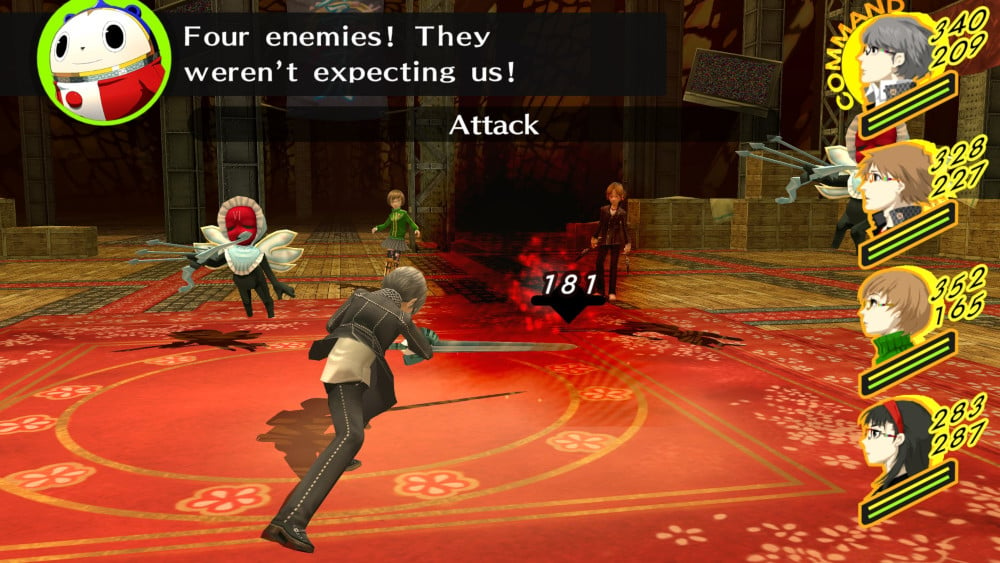 In Persona 4, you enter the TV to save those who have been kidnapped. Your enemies are the ravenous Shadows that live here, who would easily eliminate those without a Persona to defend them. To obtain a Persona in this world, one must face their inner feelings and accept themselves for who they are. For most people, one Persona can be summoned, but you are special. You can summon over 150 different  monsters, each with their own strengths and weaknesses. To awaken to your full potential, you must obtain as many Persona as you can, and utilise fusion to combine them together and create even more powerful creatures. This ultimately leads to a game where grinding is, in fact, not your main method of becoming strong. Instead, the focus is on building up Social Links, allowing you to blend together your Persona to even more powerful levels.

Battle itself is focused around physical, magic, and support moves. Each Shadow has its own strengths and weaknesses that can counteract your own. This is where you can utilise a surprising amount of strategy, switching your Persona when appropriate to cover your defense, or to go on the offense with powerful magic attacks. Some of the bosses can be tough, making it crucial to utilise your arsenal to the best of your ability, combining both supportive moves with attacks and guards when appropriate. One downfall with this series as a whole, though, is that some spell names can be confusing. I have over 70 hours in Persona 3, Persona 4, and Persona 5, but I still find myself checking which move decreases defense or increases attack. 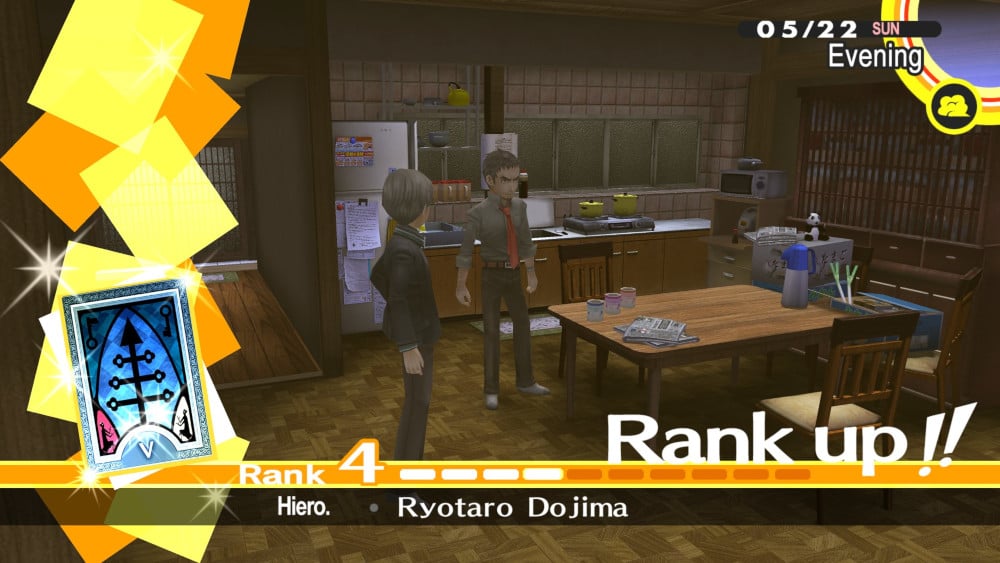 Persona 4 Golden has a huge focus on character interactions. Each Social Link (Confidants, for you Persona 5 players) lets you dive deep into each character's inner psyche, as well as give you an advantage in battle. Each Persona has an Arcana, and each Arcana is assigned to an NPC. When you become closer to these characters, you can form Social Links, which greatly enhance the abilities of Personas created via fusion. This may seem like an unnecessary chore at first, but these bonds break up the battles in the perfect fashion. In fact, I slowly found myself invested in each character as their story progressed.

The cast of Persona 4 Golden is the best in the series. I love Persona 3, and I'm enjoying Persona 5, but the characters in those games do not grab me nearly as much. Persona 4 Golden has an ensemble of unforgettable characters who I found myself genuinely attached to as the game progressed. Hell, I've had Chie Satonaka as my icon on at least one website at a time for the past 6 months. Each of these characters is also backed up by some of the best voice-acting you can find in a JRPG. There’s no voice that sounds half-assed or unconvincing, portraying each individual exactly as I'd imagine them. I mean, even Teddie has an intentionally grating voice, but it suits him bear-y well. 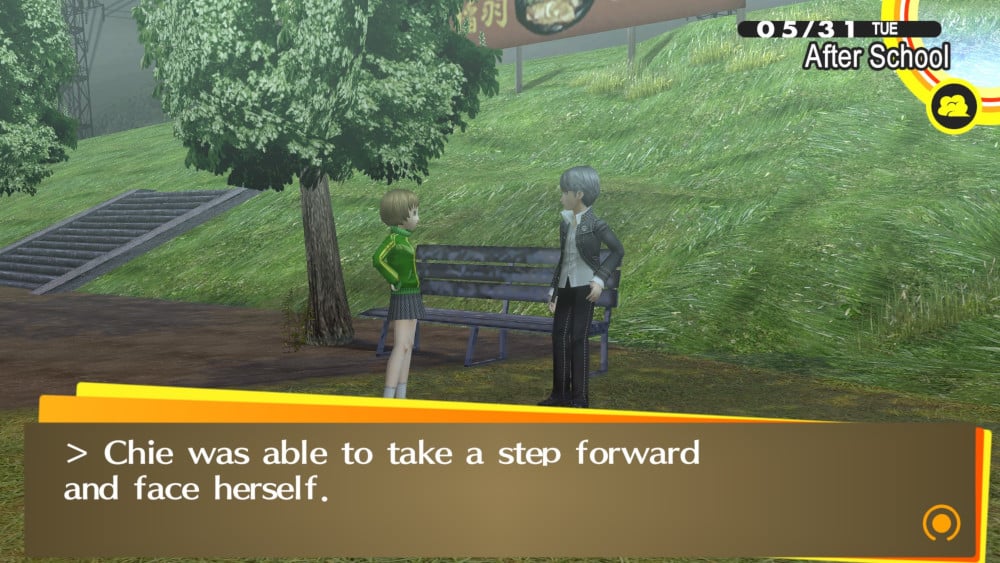 Graphically speaking, Persona 4 Golden really isn't impressive. I mean, when you bear in mind that it's a PlayStation 2 title that was ported to the PlayStation Vita, and then over to PC, it's not surprising. That said, I still think, for the most part, Persona 4 Golden is a pleasant-looking game. Sure, the character models are dated, and the textures aren't exactly high-res, but the detail in the environments is still impressive to this day. Hell, since it's on PC now, we can even look forward to some impressive mods to freshen things up. There's already a mod available to disable the motion blur.

The PC version has a few nice graphics settings in store. Most notably, Persona 4 Golden can be played at up to 120fps. That's right, you can play a Persona game on your PC at 60+fps, and it's an official release. That just blows my mind. There's also the option for supersampled antialiasing, which I'd highly recommend, as the game is already incredibly easy to run. There have been reports of some issues with FMVs stuttering, which I haven't personally experienced, and there's a slight hitch when you perform an all-out attack, but for the most part, it's a rock-solid experience. 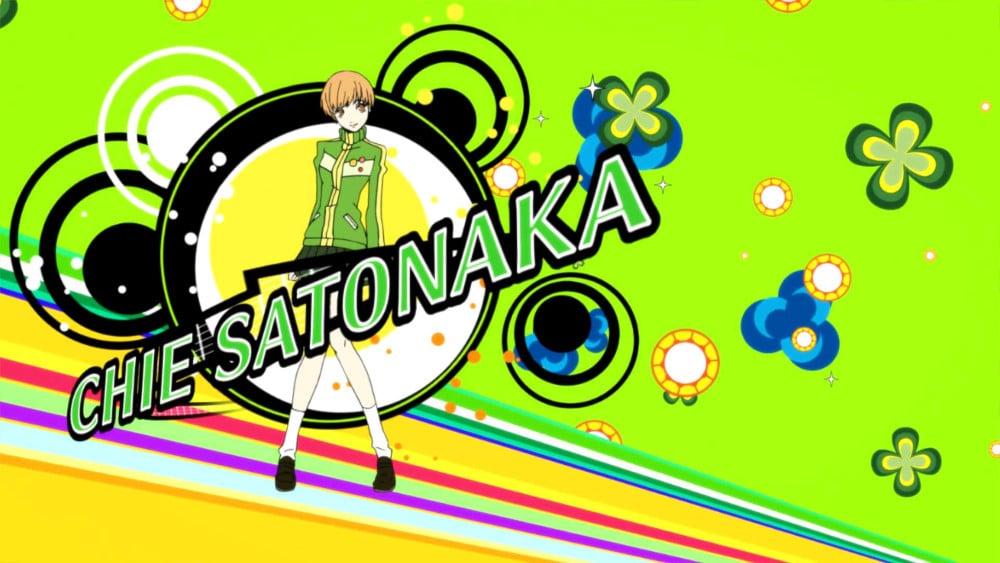 As with the other Persona games, Persona 4 Golden has an excellent soundtrack. Each of them feels emotional, even if some of the lyrics can be complete nonsense. Music, is of course, something that the Persona series seems to get right again and again. I was continuously impressed as the game progressed, each new track seeming better than the last. 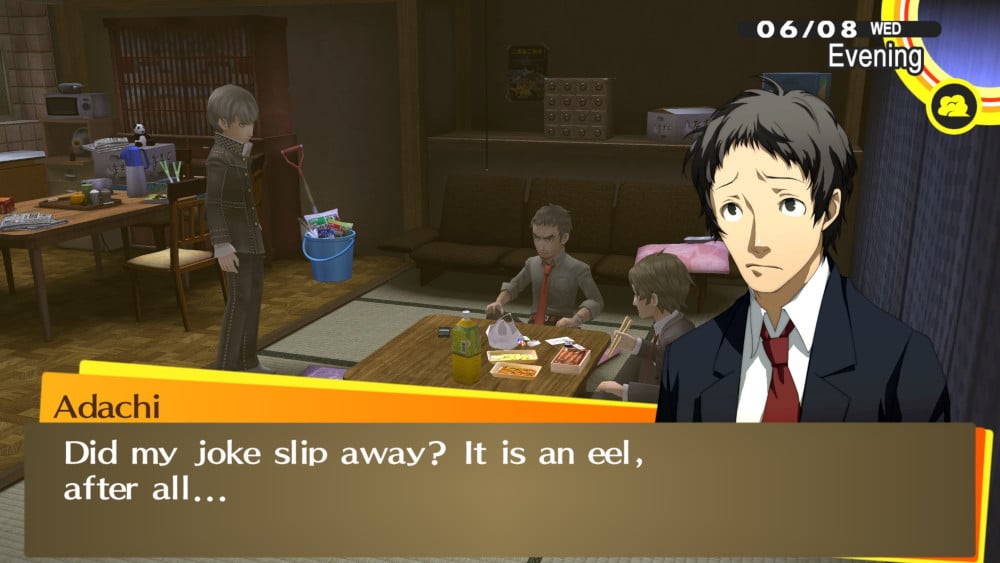 I originally played Persona 4 Golden on the Normal difficulty, and it was pretty easy. To me, it seems as if the game was 'dumbed down' from the original release on the PlayStation 2. There's almost no consequence to dying, since you can just retry from the start of the floor you're on, which definitely isn't a bad thing. I can't remember how many times Persona 3 killed me off and made me lose a huge chunk of progress.

Persona 4 Golden is well-paced, but has a problem with knowing when enough is enough. There are several secret bosses at the end of the game, just after you think you're finally done. In order to continue, though, you must do specific things to avoid each "bad ending." This meant that I watched the credits sequence way too many times. That said, each additional dungeon was a blast, and it’s certainly a step up from the unbearable filler Persona 3 was plagued with. 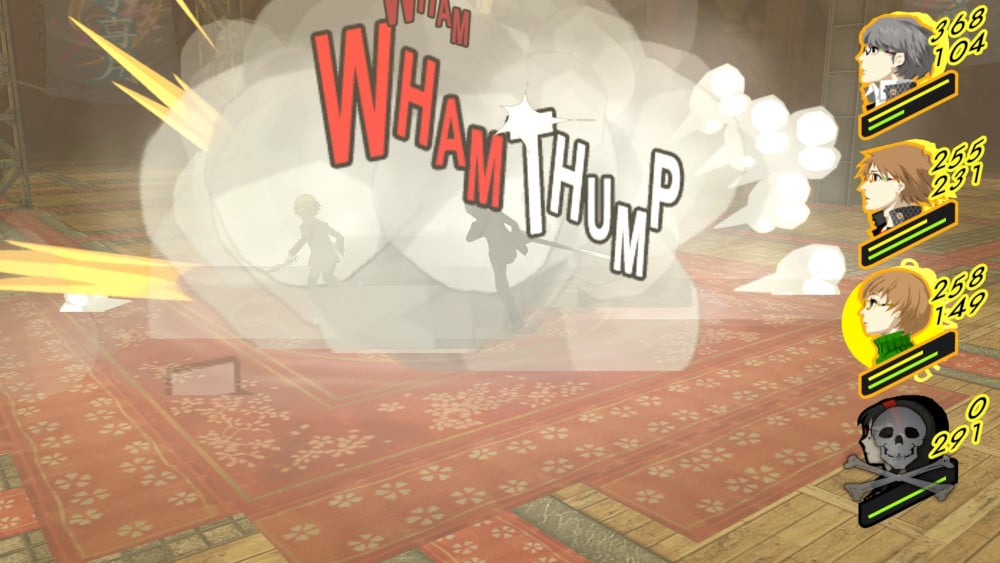 As for replay value, it really depends on who you are. Six months ago I would have said that I wouldn't be playing again for a good long time, but here I am, having a blast with the New Game+ on PC. With New Game+, you start off with the same social stats as you finished the original playthrough with, as well as your Persona compendium, money, and weapons in the shop. This makes you completely overpowered, which lets you focus more on the Social Links.