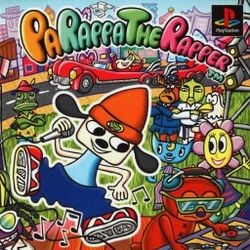 Single player
Local Multiplayer
Online Multiplayer
Co-operative
Kick, Punch, It’s all in the mind! If you wanna read this – I’m sure you’ll find… it’s not a good “remaster.”

I adore Parappa the Rapper. I wrote a recommends when the second game came to PS2 classics, and I've been dying for a new one for years now. The little beanie wearing dog is credited with the beginnings of the rhythm game genre, a genre that has brought on some wacky and colorful varieties over the years. But it all comes back to Parappa in the end and boy does it show with this new remaster.

To start with, I never actually saw Parappa as a game that could be remastered. There isn’t much to work with here aside from making the already sort of timeless art style a little more vibrant and smoothed out. You could also tweak the sound a bit and digitally enhance it, which seems to be the option Sony went with. 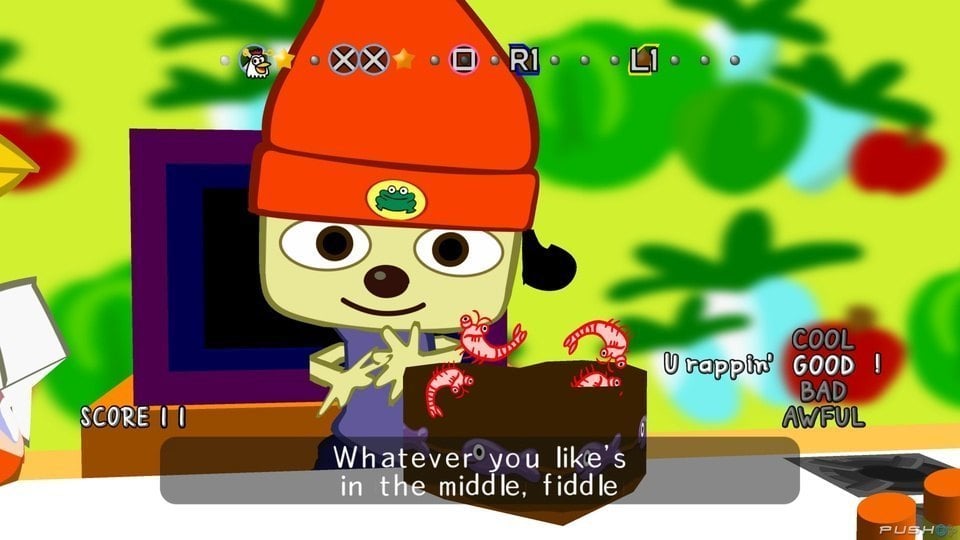 All of this culminates into a slightly better looking and better sounding Parappa game. Other changes include bringing over the background song options from the PSP version of the port, a nice little option for those that want to insert some variety to the music.

There are also new options that allow you to both, “See and Feel the beat.” Seeing the beat makes the Parappa icon that goes across the screen to the prompts pop larger to help players know what they’re accomplishing. Feel the beat vibrates the controller to the music, a feature that I got very quickly annoyed with as the game went on and kept off for the remainder of the story.

Variety is nice and all, but it does not help Parappa with its glaring issues now that it has been brought to PS4. 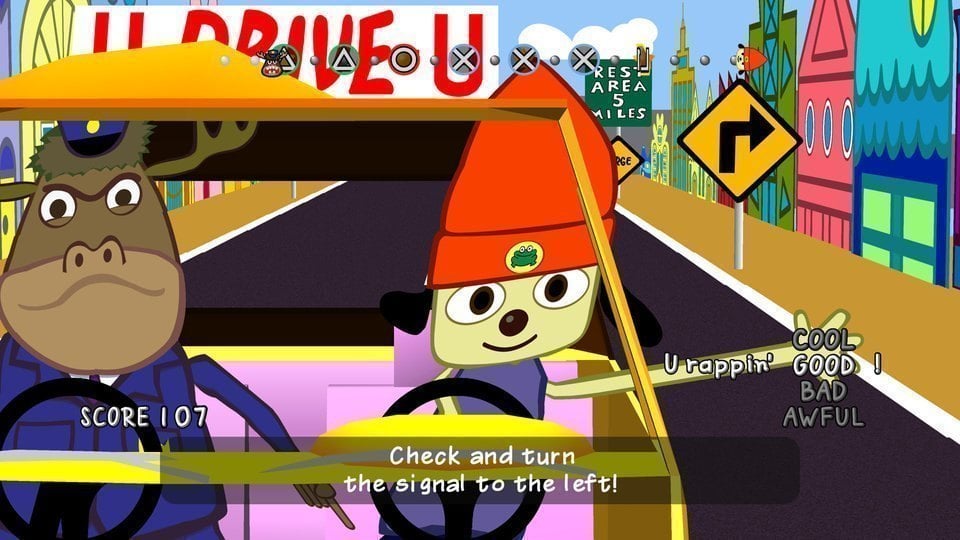 For starters, this game just feels incredibly old. It’s that kind of situation where you play the first ever 3D game or first shooter, and it feels leagues different than anything you’ve played today. Parappa suffers the same fate, and a lot of this is thanks to the noticeable lag that hinders the rhythm. In a game of timing delay is the mortal enemy and trying to compensate for it makes the experience incredibly frustrating. Fans of the original may be able to make up for the lag thanks to their past experiences with the game, but trying to introduce Parappa to new audiences will only leave them with a bad taste in their mouth. 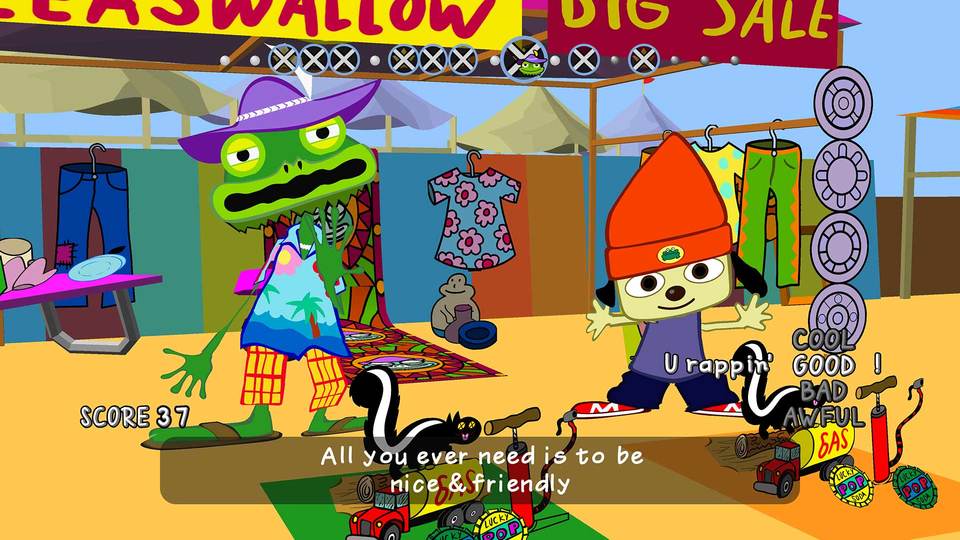 This rang incredibly true when I attempted to get my girlfriend to play who had never touched Parappa before despite owning a PlayStation when she was younger. She’s a huge rhythm heaven fan, so I figured this game would be right up her alley. Instead, she spent most of the game being unable to work with the messed up timing. She told me I must have had my nostalgia glasses on when I was initially talking about the game which I can’t deny after watching her try to enjoy it. 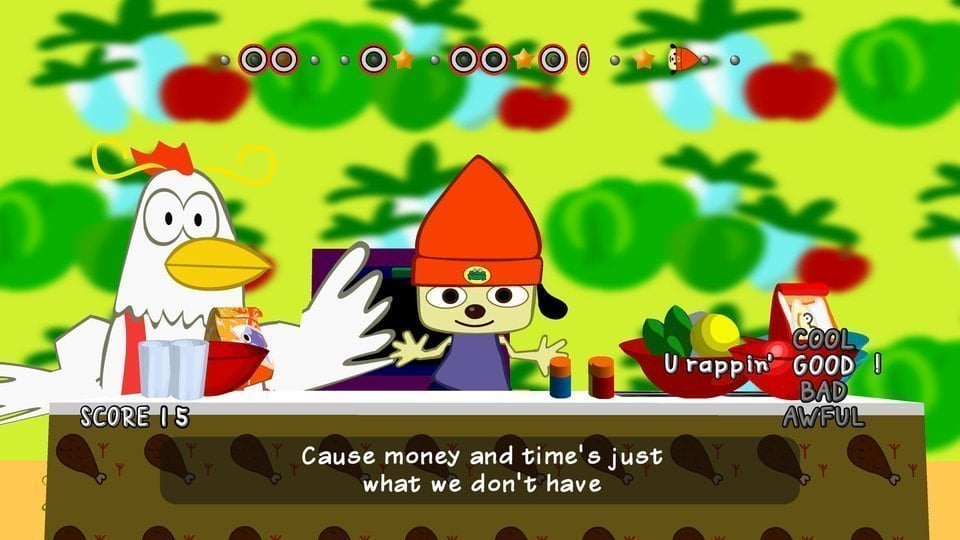 There are not enough new features to help the old game pass along on a modern console. Most remastered games help fix control options, sometimes fix old bugs or do something to make the experience replayable in today's standards. Parappa, on the other hand, does none of this.

As nice as it sounded and looked there was no denying that Parappa is an old dog that you can’t slap a new shiny beanie on to make him young again. What worked all those years ago has come too far to work today. I'll always enjoy the original for what it was but as a modern remaster this game just doesn't cut it. 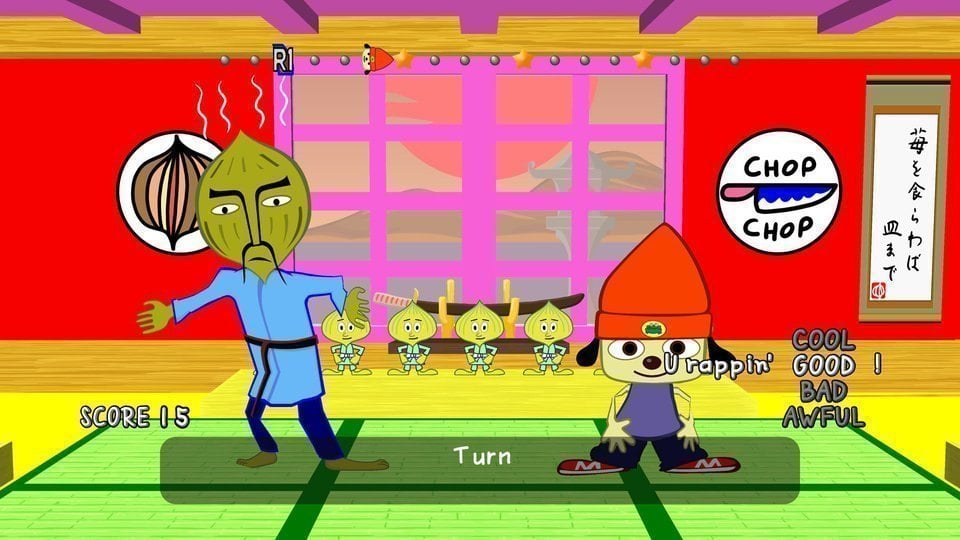 What We Liked ...
What We Didn't Like ...
4
Gameplay
The gameplay is clunky and hindered by lag. It rarely works well unless you compensate for the lag which should not something I need to say for a rhythm game.
5
Presentation
Parappa looks decent but a shiny coat of paint can't hide the game's glaring issues in its presentation.
3
Lasting Appeal
There is almost no replay value and barely any reason to want to complete it in the first place.
4
out of 10

I'll always love Parappa. It's due to this love that I have to be harsh here because I expect better from the origin of rhythm games. We'll just have to believe if he ever comes back he makes a debut that feels like a modern rhythm game should.
Reactions: Issac and T-hug
Share:
Facebook Twitter Reddit Pinterest Tumblr WhatsApp Email Share Link
Much better game is bust a groove, trust me.
I get this game is very popular, but why would a rapping dog who has a crush on a flower, and story that is questionable? I guess it must be the humor and the music. Still I would suggest bust a groove over this game even if it doesn't have a remaster like this one. Is not a rapping game, but is a rhythm game you can play with a friend and have good music as well.
What's this?
What's this?
What's this?
A trick with a twist?
Somebody do something call somebody and make it quick!
Reactions: Deboog

You're one to talk, your theme song is just repeating "PEPSI MAN" in different ways.

Sonic Angel Knight said:
You're one to talk, your theme song is just repeating "PEPSI MAN" in different ways.
Click to expand...

I'm sorry,
I lied,
Just wanted to guide,
Everybody through this and go with the ride
Hold the hose real tight and get ready for a real fight

Exaltys said:
Hold the hose real tight and get ready for a real fight

better game though. the whole concept of these games work better when you don't dance around a vocal track.
@chavosaur Was wondering if you considered doing the review with only rhymes.
There is a free demo of this. I liked the demo but not enough to buy it. The rhythm in the first level is really easy.

The amount of content here is not very much. You can finish the game in like an hour and that's a poor value.

Review Hatsune Miku Project DIVA Future Tone. I'm sure Sega will give you a key if you say you're from GBAtemp and ask nicely. There is a free demo of this one too if you want to check it out.
Nah! Looks boring.

flame1234 said:
Review Hatsune Miku Project DIVA Future Tone. I'm sure Sega will give you a key if you say you're from GBAtemp and ask nicely.
Click to expand...

Diva X has a review up on the Vita. Though that entry isn't as good as others in the series. SEGA's CEO has switched, and they seem to be much less friendly.

It's a shame to see Sony screw up this remaster. I suppose with such negative reception, this is a nail in the coffin for the franchise...again.
Again a better rythym game exist already, it may not be new or remastered in HD but is old and even 2 player fun, is called BUST A GROOVE.

And @Chary don't you dare mention that persona dancing game. Or the next time we play rocket league, I'm making your car go BOOM!
Ahh, rhythm games, rhythm games! I enjoyed them a lot years ago. Parappa, (although I'm not a rap fan by any means) was pretty good on PS1, especially when you could break into freestyle. Too bad they screwed up on this remaster. I enjoyed a lot Bust-a-Groove too on PS1, and it's sequel, Bust-a-Move 2 Dance Tengoku Mix (japanese release, not the crap we got as Bust-a-Groove 2). I remember enjoying Mad Maestro and Gitaroo Man on PS2 also. It seems like this genre has faded away nowadays. Too bad.
Reactions: Sonic Angel Knight

Dust2dust said:
I enjoyed a lot Bust-a-Groove too on PS1, and it's sequel, Bust-a-Move 2 Dance Tengoku Mix (japanese release, not the crap we got as Bust-a-Groove 2).
Click to expand...

This is all that matters, these are better games than this Paper rapping dog.
Reactions: Dust2dust

There is almost no replay value and barely any reason to want to complete it in the first place.
Click to expand...

It's a rhythm game. Replay value comes from wanting to hear the songs again and experience the whole vibe of the game - especially with rhythm games from this era. It's why I still regularly play Parappa, Vib Ribbon, Um Jammer Lammy, Bust a Move *(screw the western 'Bust a Groove' release, the songs are better in the ntsc-j original) and it's sequel.

This triggers me immensely.

B_E_P_I_S_M_A_N said:
This triggers me immensely.
Click to expand...

If you wanna test him,
I'm sure you'll find that
SAK is screwed
This is the first rhythm game ever (as far as I know), and one of the reasons that made me buy a Playstation. Later, some other music games came, like Bust a Groove, Dance Dance Revolution, Pop'n Music, Guitar Freaks, and Um Jammer Lammy.

@ KenniesNewName: I wish the blok phone took off 3 minutes ago
Chat 3