Paper Mario is a series that, truly, needs no introduction. The franchise has been a staple on every major Nintendo console since the Nintendo 64. Does the latest installment, Paper Mario: The Origami King, bring stacks of fun or does it fold under its own weight?

Paper Mario: The Origami King starts like most great Mario stories do: heading to Princess Peach’s castle at her invitation. When they reach Toad Town, however, the Mario Bros. find it totally abandoned. Making their way to the castle, they quickly learn that the entire kingdom has been taken over by Olly, the Origami King, who is creating an army by folding the normally paper minions of Bowser into origami soldiers. Olly steals Peach’s castle by lifting it with streamers, and banishes Mario in the process. Now Mario must travel the world with his own origami partner, Olly’s sister Olivia, to free the castle and stop Olly from turning the entire world into origami. 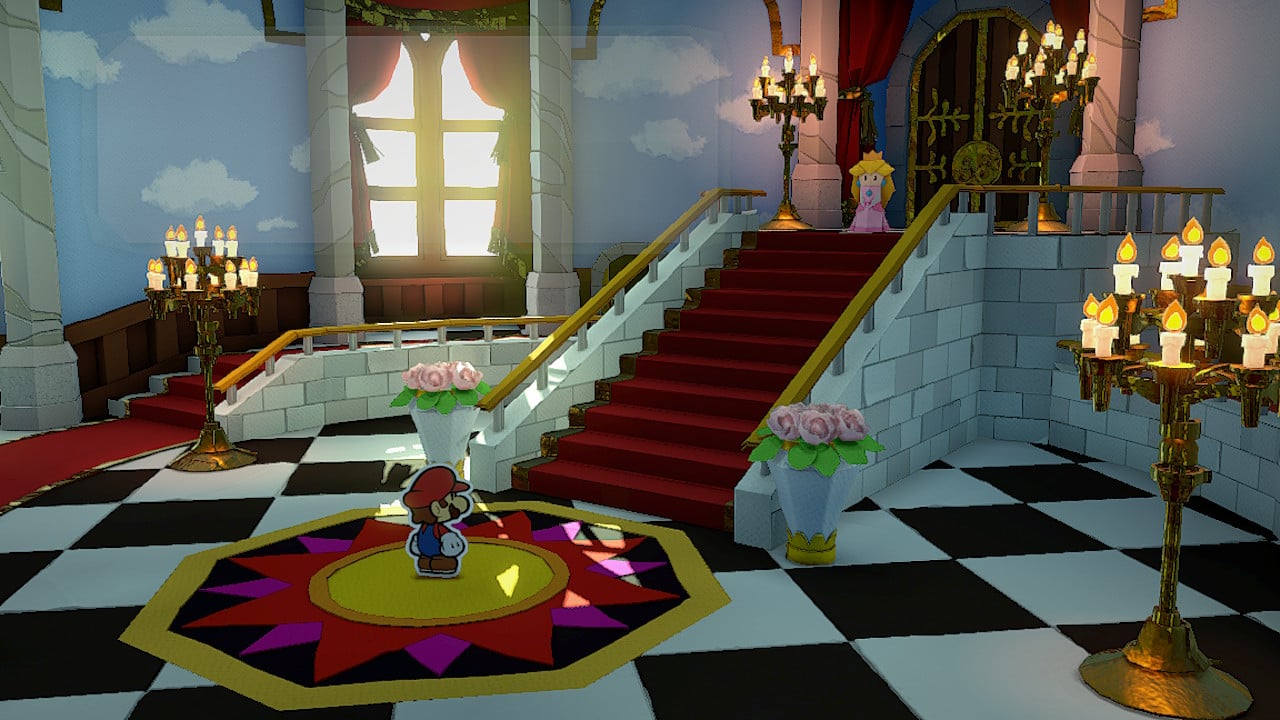 The writing in this game is just great. Even outside of the storyline itself, the dialogue and character interactions are hilarious and captivating. I lost track of how many times I found myself laughing out loud to the dialogue and on-screen animations. The game is chock full of jokes, references and meta humor, so much so that I’d be shocked if there’s a single person who didn’t at least chuckle once while playing. Admittedly, not every joke lands, and some of the writing does end up more childish than actually funny. But in my mind, the working comedy outweighs what didn’t work, and it became easily one of the funniest games I’ve played all year.

The art design is something I particularly love here, too. In every Paper Mario game, the general aesthetic stays the same with the world and characters being made out of paper. Each game puts its own spin on this concept, and The Origami King’s might be my favorite yet. In a trend started by Paper Mario: Sticker Star, the game looks like it was designed directly from an arts and crafts store. Every item, landscape, and building in the world is designed not just to be made out of paper, but to look like it was properly and lovingly crafted out of art supplies specifically for these characters. The detail even expands to underneath the world, where it can be seen that all of this is being held together by a wire frame. The characters themselves retain the white outline around them introduced in Paper Mario: Color Splash, helping them stand out from the background much better than previous entries. Enemies and some NPCs, meanwhile, take on the appearance of folded paper, sticking to the game’s main theme. The origami enemies really look great, and match the rest of the world beautifully while keeping their own distinct style. The attention to detail is superb, and it pays off with how clean and crisp each level, character, and enemy looks. As I mentioned, this art style has been the series norm since Sticker Star, but it looks the best it ever has in The Origami King.

The stunning visuals are matched, unfortunately, with some pretty mediocre sound however. Don’t get me wrong, all of the sound design you expect to be there, from the classic Mario sound effects to the paper world-specific effects, are on point. The music though, is just so forgettable. Admittedly, the Paper Mario games have never been known for their outstanding music, and this continues with The Origami King. Most levels have upbeat and fitting music, for sure, but nothing that I found to be particularly memorable. Unlike the familiar battle theme of, say Paper Mario: The Thousand-Year Door, which I still find myself humming at random, I already can’t think of a single music track from The Origami King that I’m going to feel compelled to listen to outside of the game. It might be nitpicky, but good sound design is important for immersion and I just wasn’t feeling it here.

Gameplay starts out as what you’d expect from the series. You’ve got your traditional platforming and coin collecting, exploration, and going from plot point A to plot point B. There’s collectibles to find, trapped Toads to save, and holes in the world that need repairing in each level. It gives inspiration beyond the story to properly explore each level and get the most out of it. I love this because, as I’ve made clear, the world is so beautiful and clearly crafted with care. The amount of things that need your attention and characters to interact with truly makes the entire world feel alive, and not just a backdrop to deliver the central story. What few party members you collect throughout the adventure also help develop this through their memorable and fun personalities, even if they’re admittedly not quite as good as the party members of past Paper Mario games.

The biggest gameplay change comes from the game’s central gimmick of origami. As mentioned before, the enemies have been transformed from flat paper to origami, but Mario and Olivia get special origami abilities too. Mario gets an ability called the 1,000-fold arms, which allow his arms to stretch out for a greater reach. You use this in the overworld to peel away new sections of the world, and manipulate objects. In boss battles specifically, you can use the arms to perform powerful attacks and finishing moves. In both instances, you have the option to use motion controls through the Joy-con to control the arms, physically making the general motion you want Mario to make. This is the default, and you can turn it off in the options right away, but I found it super fun and reminiscent of the Wii era, but with more responsive controls. Olivia, meanwhile, gets a variety of elemental powers through the ability to transform into “vellumentals,” or animal-based elemental spirits. The powers add extra attack options to boss battles, and help free up new areas in the overworld to access. Olivia’s elemental powers are just fine, but I specifically enjoyed the 1,000-fold arms, and found that they added a lot to the game. 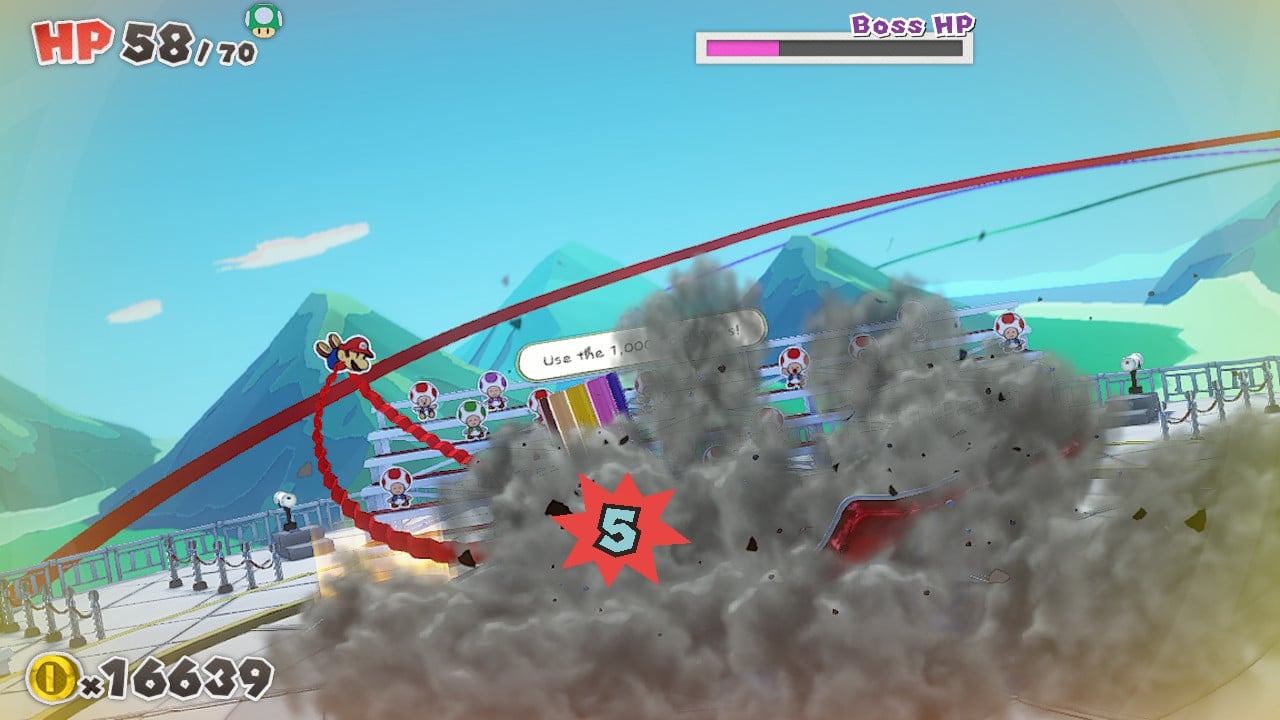 Combat is the often talked about subject of most Paper Mario games. Each game has the same general form of combat, but much like the art design, they put their own twist on it. The Origami King’s combat introduces puzzles into the mix, forcing you to line up your enemies in their proper place before you can fight them. The battlefield is a circle, and each one is separated into four circles and twelve sections with Mario standing in the middle. The sections can be manipulated a set amount of times at the start of each combat round, using the sections to move enemies vertically, and the circles to move them around the circular battlefield. Lining up the enemies in either a line or a cluster of four gives you an attack bonus, with which I often found myself clearing the map of enemies before they could even attack. You attack with equippable boots and hammers of varying degrees of strength, as well as consumable items like the fire flower, and POW blocks. This changes for boss battles, where the boss takes the center, and Mario has to line up a clear path to it, ending on an “action” space to be able to attack.

This form of combat is… interesting, to say the least. I’ll give it credit, it definitely does something new. But the sliding puzzle mechanic serves only to slow down combat, and make it more tedious than fun, which isn’t a good sign when your game is one with RPG elements and regular bouts of combat. It’s not all bad, the traditional “time your button presses for stronger damage” system from previous Paper Mario games is still there to keep you engaged. There’s also the aforementioned boots and hammers, which you collect stronger versions of. There’s also different accessories you can purchase and equip which give you more advantages in battle, such as extra health, a longer timer to complete the puzzle at the beginning, and a more effective block. All of this serves to make combat move even faster, which is what keeps it from being a game killer in my mind. The frequency of combat sessions is outweighed by how quickly you can make them go by. The boss battles meanwhile, are a drag. Each boss has a main gimmick to beat it, which you simply repeat until the boss is down. This would be fine if it didn’t take so long to beat them. Granted this is more of an early game gripe, as the bosses in the later half of the game do get less repetitive and soak up less damage. But it doesn’t change the fact that combat, in general, is just a bore here. Luckily you’re not limited to just turn-based combat. As your base strength goes up, you’re able to stomp out weaker enemies before they can initiate the actual battle sequence, and there are mini-bosses that you fight in the overworld. Those are actually fun, and I looked forward to taking them on every time I came across one.

These gripes don’t mean that I think the game’s bad, though. Far from it actually. Combat aside, I really loved every second I spent in-game. It’s a colorful, lively game with plenty of content to keep you busy without ever feeling like it’s just trying to pad the runtime. Every time I’d reach a new world, I’d spend as much time as I could exploring and discovering each secret. Finding non-bottomless holes to fill in, Toads that need rescuing, and the collectible trophies in each area feels like a true treasure hunt, and there was a proper sense of accomplishment when you’d complete an area 100%. The world and exploration make me love the game, and I can only imagine how much better the game would’ve been with better combat and music. 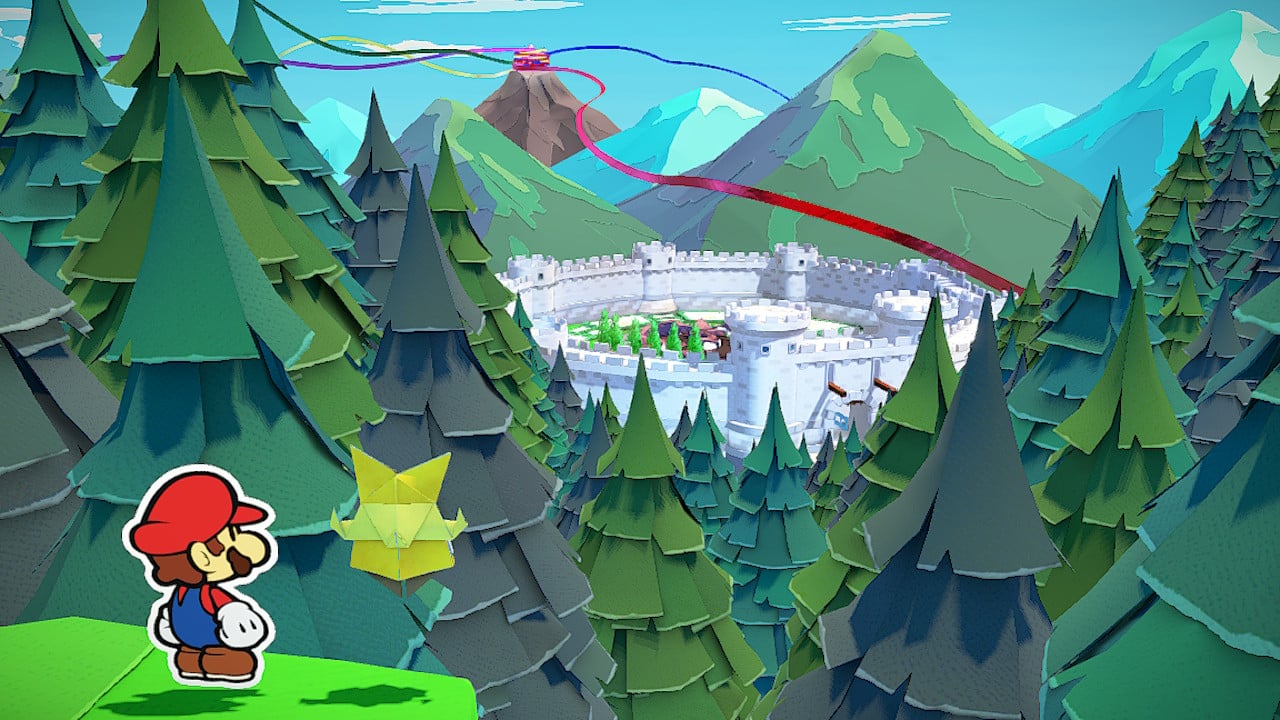