Coming from developers People Can Fly and published by Square Enix, Outriders is the latest entry to the AAA shooter looter type. Does it offer anything worthwhile that makes it stand out of the crowd?

I’m not sure if all developers signed a secret convention but most of the popular shooter looter games embrace the post-apocalyptic sci-fi trope; and Outriders slams many of those trope buttons from the outset. In its universe, the Earth turned inhabitable following dwindling resources and perpetual wars; and to give mankind a second chance, a select group of survivors left it behind to travel to the Earth-like planet Enoch.

After 83 years drifting through space while in cryosleep, the first batch of space colonists are awoken to get the lay of the land of what is to become their new home. Among those first boots on the ground is yourself, an unnamed and customizable Outrider, or an elite mercenary of sorts.

Your first steps reveal a habitable planet with elements that the Earth lost long ago: fresh air, gorgeous valleys and the planet’s own thriving fauna and flora. But upon venturing deeper, you come across a sort of alien fungus lethally infecting your teammates one after the other while a supercharged storm - the Anomaly - comes crashing down, pulverizing those it hits except… you.

But no time to dwell over this as a disagreement between leaders erupts regarding whether Enoch is actually safe for the other earthlings to land on and you get pulled into a gunfight and get severely injured in the process. Fearing that you might not make it, Shira, one of your teammates, puts you in yet another cryosleep in the hopes that this will slow down your injuries and help put you back on your feet later on.

When you do emerge from the cryo-pod, you find that the planet’s inhabitants have been making themselves at home, with buildings erected and people out and about but... the sight is an apocalyptic one. Due to limited resources, the people have turned against each other, formed factions and have engaged in an endless war; essentially turning Enoch into yet another Earth that they left behind. Your pod was apparently in enemy territory and as you are left to die in a no man’s land, you discover that you’ve gained new powers thanks to the Anomaly strike, making you an Altered.

These abilities enable you to singlehandedly barge through the no man’s land and seek friendlier people; and you indeed end up meeting old teammates and learn that over 3 decades have passed since you were put in the cryo-pod (this essentially makes you a 100-plus-year old gramps who looks like he is in his mid-30s). One thing leads to another and you learn about a cryptic signal coming from a region devoid of the Anomaly which could help other people settle down and support them with more resources. Nothing is certain but there’s nothing left to lose anyway, so you and some other space colonizers decide to look into the source of this signal and the process isn’t without its twists and turns. 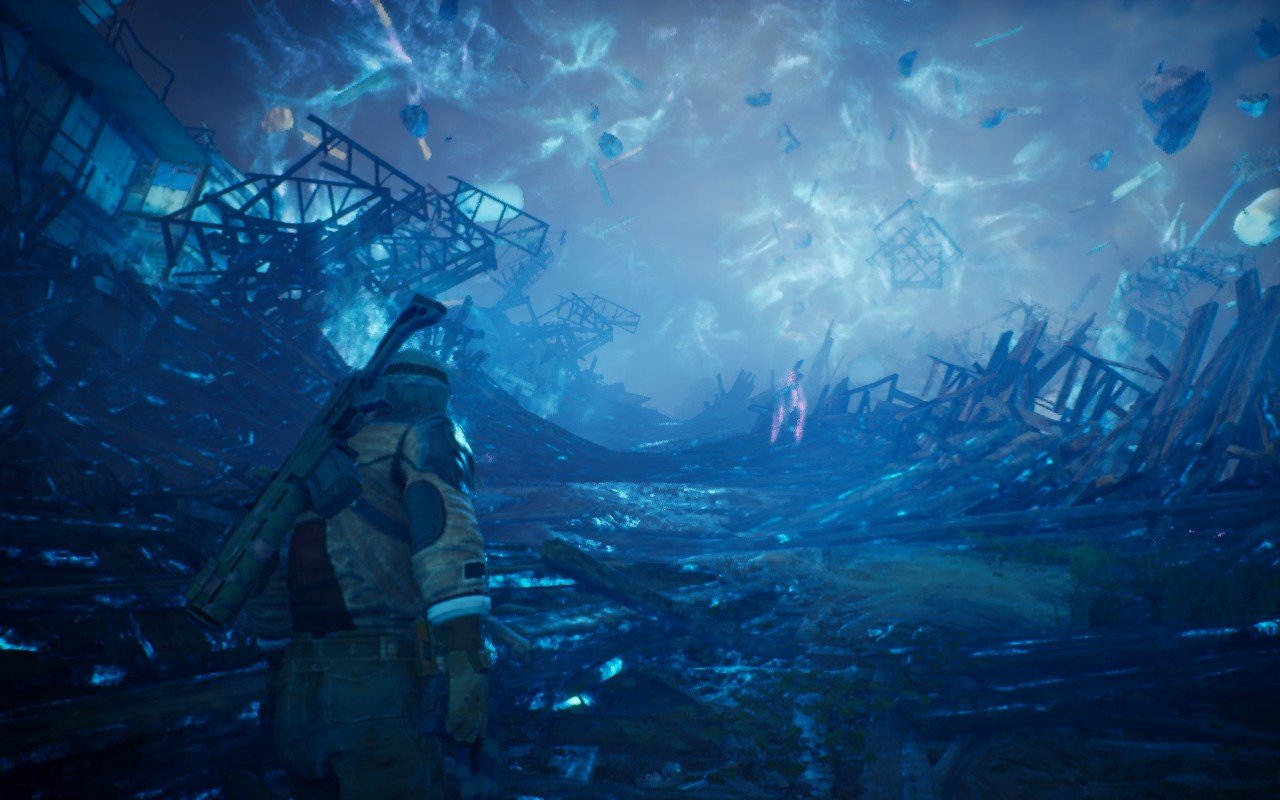 Outriders’ plot does keep the intrigue regarding the story behind the quasi Garden of Eden turned into a living hell, some of its mysterious cast and its sci-fi and fantasy elements; even if it’s relying a bit too much on the patience of the player to do so as it takes its sweet time to elaborate and does so in rather blandly. Exposition is done in a rather uninspired way through a set template: sequences of cutscenes between levels and over radio during levels while the lore is fleshed out with notes you find while exploring your surroundings. Given that you progress through the story with a group of hardened combat veterans, some could have joined you in-game to assist in battles, and more importantly, to make dialogues more lively.

The plot does get somewhat better during the latter half but one shouldn’t have to wait several hours to discover that; and it still follows the same template. I also found that some cutscenes and load screens happen a bit too abruptly, sometimes even during fights. Combined with the narrative's slow-paced nature, bland execution and reliance on a set template, these might not feel very attractive at first. However, I found myself surprised to eventually grow used to it as I got more invested in the gameplay.

Just like the plot, the gameplay marries the fantasy and sci-fi genres in an original but more successful and intriguing way. When you discover that your character is an Altered, the game prompts you to choose between one of its 4 classes: Technomancer (long range support), Pyromancer (medium range), Trickster (close range, hit & run) and Devastator (tank). Each of these come with their own supernatural ability like Trickster, which I went with, being able to teleport behind enemies and freezing and slashing them with a “temporal blade”. More abilities unlock as you level up such as the ability to temporarily supercharge your bullets or throwing a ricocheting knife from afar.

These abilities, combined with an armada of guns of varied range, help make for truly fun, fast-paced action sequences while fighting against waves of varied enemy types from humans, altered-humans, not-humans and freaking flying pterodactyl-like alien things. As a Trickster, I have to stand on my toes as I gain health after successfully killing an opponent but if I let my guard down, a horde of enemies will come shooting or charging at me thanks to the competent (if not pesky) AI. 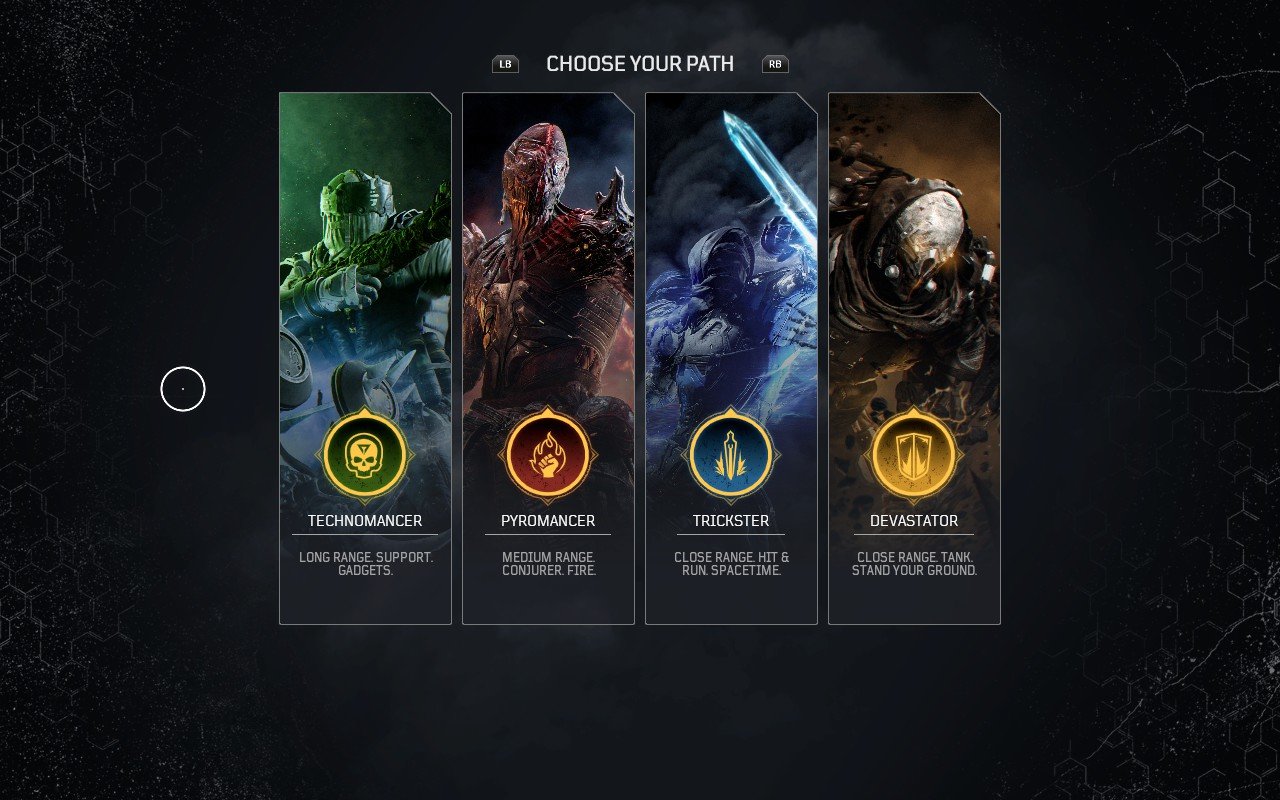 In Outriders, you are always outmanned and it can feel a bit overwhelming, especially when starting out but you are never outgunned. This helps in generating action-packed sessions that will be unique to your class and playstyle. The ensuing fast-paced fun further helped me overlook the bland plot execution and the linear template it follows (move from one blocked zone to the next while clearing the obvious combat areas with conveniently-placed barricades). Enoch’s environment does get varied after the first few hours of sepia tones and dull corridors as you get to travel through abandoned towns and forests. It’s a pity that the linearity doesn’t allow you to explore the gorgeous landscapes to your heart’s content as they do offer quite the sight.

Adding to the variety in combat style is a class point system (skill tree) and the ability to equip your weapons and armor with mods. Modding your gear can not only improve the damage or reload rate and such but also enhance them with kickass effects like freezing bullets, creating explosive shots, inflicting effects like bleed or even boost your abilities.

As for the class point system, it’s a flexible one where you can completely reset the skill tree and reallocate the points earned so far. This reduces the need to grind and adds to more possible play styles. I really found Outrider's feature to easily re-spec your character at no extra cost as a great addition to not only the game but also the genre as a whole.

Should areas feel too challenging, you can drop to a lower difficulty tier to make progression easier. This is also a very handy feature of the game, enabling you to progress without forcing you to grind and feels welcoming to more players. Playing at higher tiers will make battles tougher but reward you with better loot. Loots are themselves quite generous in Outriders but not all are worth taking space in your inventory so you can just recycle them for mods and resources. 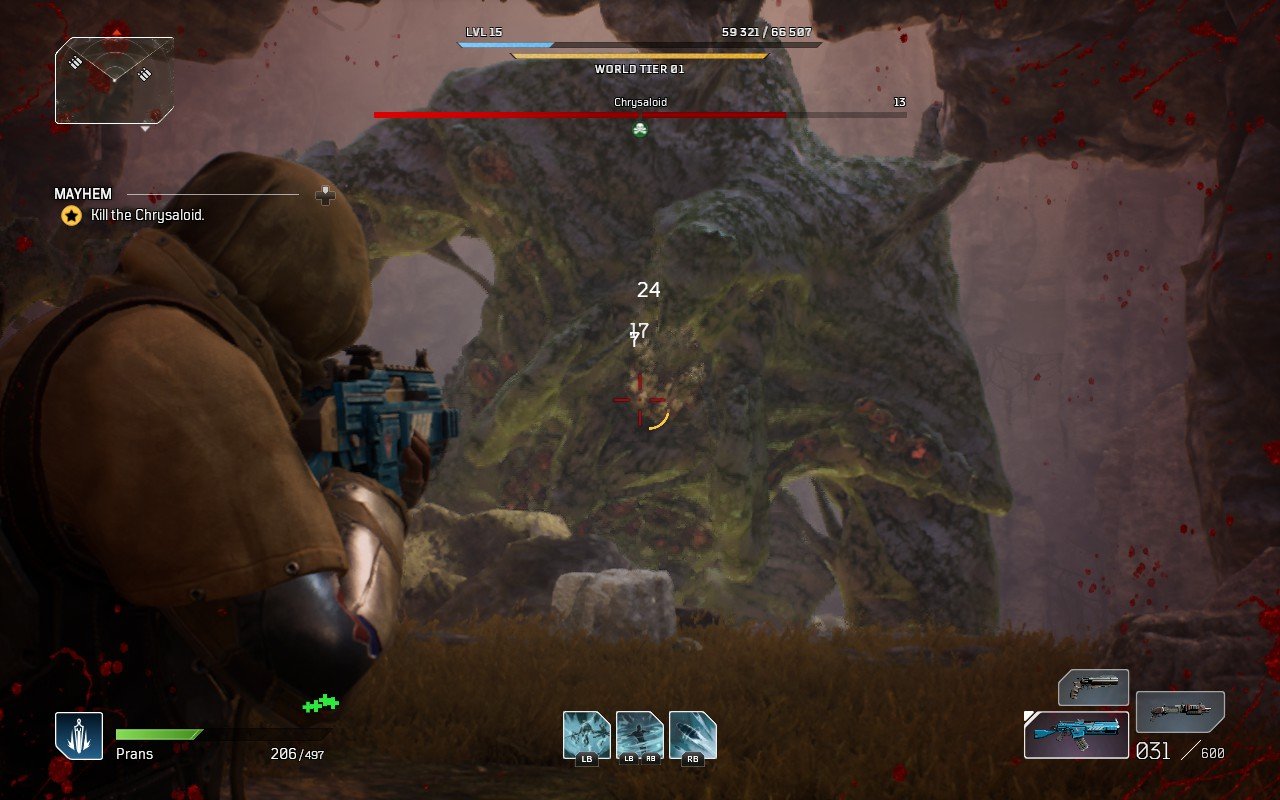 So far Outriders sounds like a single-player game and it is perfectly suited as one but it also supports online co-op with two or three players. This adds another layer of fun to the gameplay as you mix up things with each player’s skills. For instance, as a Trickster, I can teleport behind a group of unsuspecting enemies and freeze them for my Pyromancer co-op buddy to subsequently incinerate them. Such co-op tactics and combos can make for exciting and memorable sessions; provided that you pair with cooperative players.

As endgame activity, you are presented with Expeditions which are sort of a continuation of the story that pit you in more challenging areas to retrieve resources. You’ll face tougher enemies of higher difficulty tiers than in the main game but that also means better loot drops. The quality of the latter also depends on how fast you clear an expedition which is tougher than you might have experienced in previous missions. Co-op might be preferable for these missions as they are harder to complete.

That said, the endgame content does feel lacking barebones; particularly for a game that’s meant to last for co-op gameplay. But you can try new sessions with a new class for your character as each class requires different approaches.

Unlike other shooter-looters, Outriders isn’t a live-service game as there are no in-game purchases nor even DLCs planned at this time. This is a personally attractive aspect as it offers an all-in-one package from the get-go. However, it does need a constant online connection, even when you are playing solo. This is a major downside of the game as its servers were overloaded at launch and if you have a wonky internet connection like in my room, this will lead to frustrating connection errors forcing you back to the start screen and losing your progress. An offline mode for solo sessions or even couch co-op would have been very welcome, if not necessary, for such a game.

Another pesky technical issue is that you cannot really pause in this game. Sure, you can access your inventory, check out the lore from collected tidbits and access option settings but the game will keep running in the background. This means getting shot at if you pause it to address something in real life. I could understand this feature in co-op mode but in solo mode, it doesn't really make sense. This again points to the need for an offline mode.

During my early gameplay, I also came across another major issue where the HUD would disappear altogether. The fix involved returning to the lobby and restarting the mission but I found this much later than I would have liked. This is not ideal but seems to have been fixed with a recent patch. 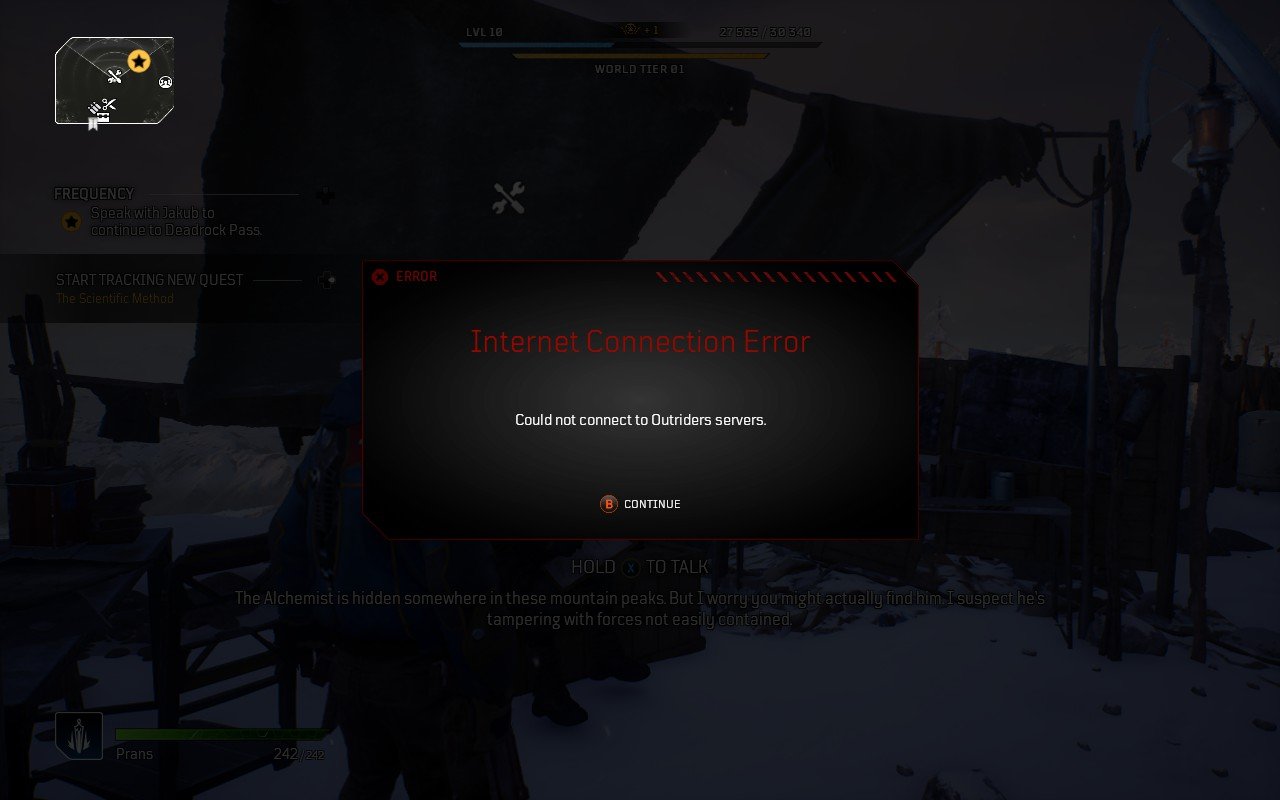 Aside from its technical issues, fixed progression template and bland plot execution, Outriders does prove to offer some entertaining gaming sessions thanks to its exciting and varied combat sequences which feels more like the focus of this title than anything else. It's a shame that it doesn't execute its plot in a more satisfying way, include more endgame content nor does it let you explore its gorgeous landscapes more than in its linear fashion as those would make for a more enticing experience. 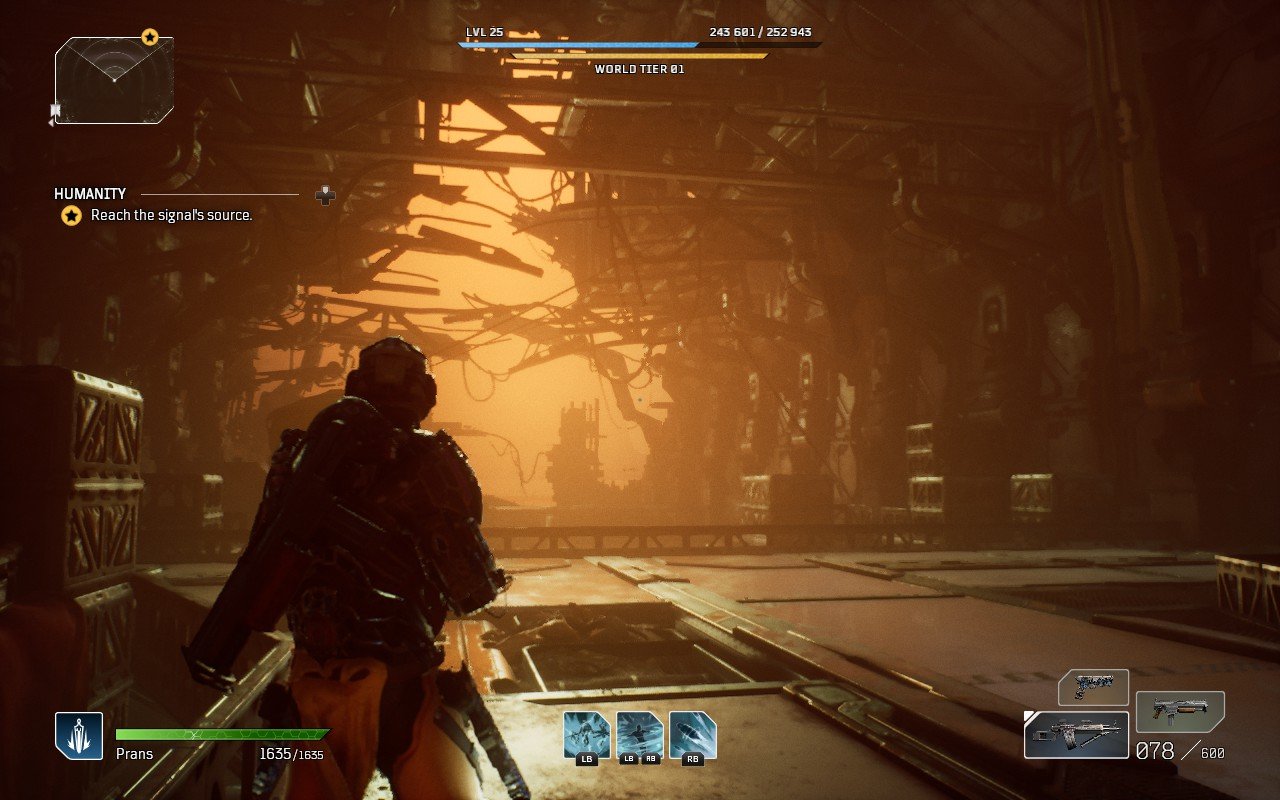