The video game industry of the early ‘90s saw a resurgence of Full Motion Video titles for both the PC and home console markets. This widely felt rediscovery of FMV interactive story telling was a direct result of evolving CD-ROM technology. For the first time since laser disc gaming a decade earlier, it was possible to showcase the mingling of movies and video games as one interactive experience. There were many notable software releases during this period of experimentation. However, only one may forever remain associated with the creation of the Entertainment Software Ratings Board (ESRB), the infamous Night Trap

Night Trap began as a reimagining of a voyeuristic movie on rails titled “Scene of the Crime,” which was a prototype software title designed to demonstrate the potential of the ill-fated Control-Vision VHS add-on. The purposed game play design allowed the player to interact with up to 4 simultaneous security camera videos. Each separate plot advancing videos would playback at preset intervals. Since it was impossible to watch them all at once, replay value came through unfolding various story aspects across multiple playthroughs. Night Trap further expanded upon this design architecture by adding the ability to fail. This greatly increased the replay potential while providing a more interactive video game-like experience. 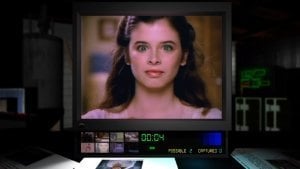 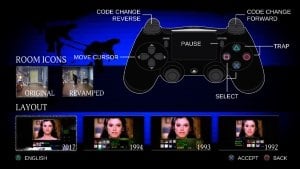 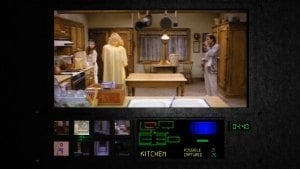 The story of Night Trap is one of blood and vineyards! It begins when a family of vampires opens their home to a group of unsuspecting teenagers. Soon after arriving at their weekend accommodations, this giddy and excited group begins to learn the truth about their captors. In a desperate panic filled escape, the teenagers rush around the house seeking help while trying to avoid becoming food. Acting as “control,” the player must provide assistance by trapping the vampiric workforce at specific intervals. This lower breed, commonly referred to as Augers, will stagger into scene until they inevitably move across a trappable area. These areas stay the same for each video sequence and must be triggered at the perfect moment, as indicated by the HUD meter turning from green to red. Augers must be caught for the story to fully advance towards completion and the traps that catch them can only be triggered when the matching color-based code has been selected. This code changes across each playthrough, acting as an additional interactive gaming element that further forces the player into watching important plot sequences. 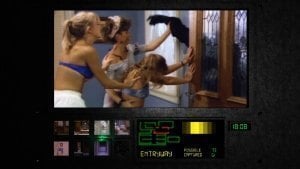 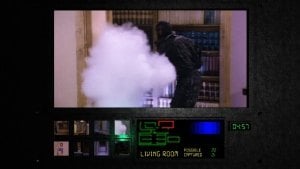 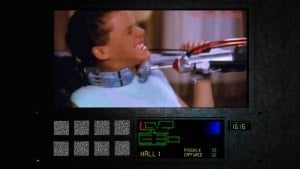 The simplistic gaming mechanics and cheesy ‘90s campy feel of the entire experience is one that will tug at nostalgia more than anything else. Thankfully, Night Trap: 25th Anniversary Edition is not the same game we were presented with on the Sega CD. Developer Screaming Villians has moved the game into the modern age with advancements that truly make this version worth a purchase. Firstly, the game has been expanded and slightly remixed. With more Augers to catch and some slight variations to the video playback intervals, gamers who still have their Sega CD Night Trap notes will be pleased to find they will need to replay some sequences before knocking out that perfect score. To accomplish a perfect ending, players may now utilize an updated security feed system. This updated view features preview-cam (or non-static) views that playback in real time, making it possible to beat the game by simply watching and trapping Augers versus rote memorization and intensive timetable plotting. The story itself has not changed and will continue to take just under 30 minutes to complete. Once accomplished, a variety of bonus content will become available. These extra features include an area to watch all of the Night Trap video footage without the need to hunt down Augers, an Auger trapping survival mode, and even a fully playable version of the prototype game, Scene of the Crime. Additionally, Night Trap: 25th Anniversary Edition utilizes high quality video footage taken from original source materials, which greatly improves upon all older versions of this game. 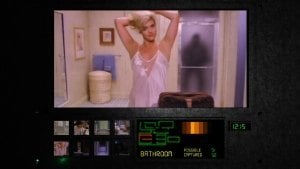 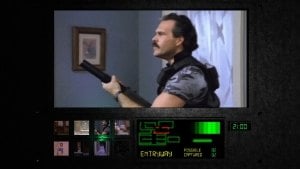 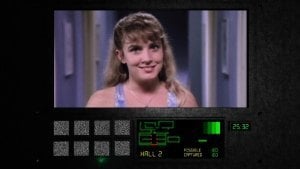 Night Trap: 25th anniversary edition is a nod to an era of gaming that has fallen into obscurity. Developer Screaming Villians has taken the time to piece together a classic experience with newly implemented additions that greatly enhance the overall experience. The game mechanics remain as simple as possible, barely registering as something more than just a short interactive movie-like experience. Whether you purchase this game to appease a guilty pleasure or simply to replay nostalgia in higher quality, Night Trap: 25th Anniversary Edition is the definitive version worth experiencing again.


-Another World
Reactions: RustInPeace and hobbledehoy899
That documentary is so good, it made me appreciate the game more. Also, the footage itself was the main draw, because it reeks of late 80s/early 90s B-movie horror cheese. The kind that prolific low budget movie directors Fred Olen Ray and Jim Wynorski would've directed, with Roger Corman often producing them. But this is even more low budget, and now learning from the documentary, they were hampered by a parenting toy corporation, wanting things toned down. It also follows the B-movie tradition where they get the biggest star they could, and feature them as the lead when half the time, they're not. For example a really old fading star ends up as an extended cameo, but they're billed pretty high. So in this, that person is Dana Plato. The footage itself is right up my alley, and judging by this review, the gaming experience is better to enjoy that. I played it on a 3DO emulator and got annoyed at the trial and error, and I wasn't really fussed to memorize shit, I quit after a handful of tries. I was more interested in viewing seeing the movie portion. I'll keep this in mind, I want to play and watch the whole movie portion.

If only Dana Plato was alive today, she'd now be one of the dozens of people that do con appearances with this and Different Strokes as her titles on the marquee. She could've been a B-movie icon heading to the 90s, as I've only seen her in Different Strokes and two softcore titles. Very unfortunate, and she doesn't get nude here, even more unfortunate. Anyways, great review.

StarTrekVoyager said:
Not a question of being a fan. But saying that this... thing is better than any random serious AAA video game is... very odd to say the least.
Click to expand...

where exactly in the review did you read that? please point out where that was typed so i can make a correction to better meet your personal needs.

-another world
Reactions: Subtle Demise, T-hug and hobbledehoy899
lol this game is awful. i played it when it came out in the 90s. surprised anyone bothered rereleasing it haha

@ kenenthk: Guess the queen was in the hospital overnight but back in the palace now 20 minutes ago
Chat 1