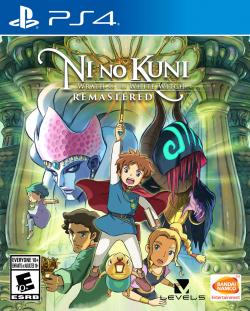 Ni No Kuni: Wrath of the White Witch originally released on the PS3 in 2013 to much praise from both critics and gamers alike. Now remastered for audience in 2019, does the story, visuals, and world built by Studio Ghibli hold up today? Well, in the wise words of Drippy, Lord High Lord of the Fairies: “Youer about ta flippin find out mun, in’it?”

Ni No Kuni: Wrath of the White Witch was released during a time period where JRPGs have since faded from popularity. Fans of the genre felt burned by recent games and it seemed as though many gamers moved on to more tactical RPGs or FPSs. It’s almost poetic that Ni No Kuni—the game where the main characters spend much time reigniting the spark of enjoyment for those in their world—itself reignited the spark of enjoyment for fans of JRPGs. Met with critical acclaim at its release, this title by Level 5 games was undoubtably a success. This success was met and in many ways exceeded by its sequel released on the PS4 five years later in 2018. Today we look at the original game, remastered for PS4, and I’m happy to announce that it still holds up today. This game is the love child between Level 5—the studio behind Dragon Quest, Professor Layton, Fantasy Life, Inazuma Eleven, and Yokai Watch—and Studio Ghibli—the studio behind Spirited Away, My Neighbor Totoro, and Ponyo. This collaboration equates to a beautiful and vibrant world with interesting characters going through a journey you actually care about, all tied together with a fun combat system that takes pieces from some of our favorite games.

The story of the game doesn't differ much from the themes associated with Studio Ghibli films. The game pulls you in with the ins and outs of the life of Oliver, our main protagonist. Whether Oliver is sneaking out of his house at night to play with his friend or on a grand adventure to save the world, you can’t help but care what this pure-hearted boy is up to. This grand adventure is told almost in the form of a fable that, on the surface, seems to cater more to adolescents than adults. However, there are many deep facets and messages to the story that catch the attention of a more adult audience. After all, very soon after the game starts (and this is a very early spoiler coming up) Oliver sees his Mom die in an attempt to save him from drowning due to his own childish antics. This very heavy start to what seems to be an easy going game gives credence to the idea that not everything is as it seems. In Oliver’s pain and sadness over the loss of his mother, his tears give birth to Mr. Drippy, the self-proclaimed Lord High Lord of the Fairies with a heavy Welsh accent, who wants to take Oliver on an epic quest in a parallel world. Mr. Drippy explains to Oliver that their worlds are connected and that each person in one world has a soul mate in the other, connecting the two. With the promise that helping his Mom’s soul mate in Mr. Drippy’s world will help bring his Mom back in his world, Oliver agrees to accompany Mr. Drippy (or is it the other way around?) on his journey to defeat the evil Shadar. While on his adventure, Oliver sees that many people are in despair; lacking courage, love, kindness, and other important emotions. Looks like Oliver and his friends have a lot of work to do to set things right. Along the way, Oliver makes new friends to add to his party and around 8-9 hours into the story, one of his friends gains the ability to recruit the wild animals, called familiars, to join them on their quest. There are several hundred different species and variations of familiars that you can defeat and battle and win to your side to train and evolve. This concept is like Pokémon (but maybe it’s closer to Digimon) in the sense that these familiars will do much of the battling for you, while the humans take on more of a supporting role. You raise the familiars by feeding them and caring for them, and level them up through battle and experience. Each character is allowed three familiars at a time, with up to three additional ones because allowed to travel with the characters on the sidelines, while the others are sent to the Pokémon Storage Familiar Retreat. Like the humans, these familiars can equip weapons and armor and objects to gain buffs and abilities. For the most part, each familiar has a first stage evolution, a second stage evolution, and two third stage evolutions which you get to pick from. As part of the lore and worldbuilding, you are given an encyclopedia which acts as a bestiary giving you vast descriptions of each familiar with much more information than other games give.

The real-time combat system requires players to think on their feet about which familiars are best to bring because typing is important and the battle system requires a lot of action on the part of the player. Whether it's better to go in with a spellcaster and attack from a safe distance or go in with a brawler and duke it out depends on the circumstances. What’s beautiful about this game, however, is that you can be super strategic with managing your familiars or you can just focus exclusively on the ones that you think are the coolest and supplement the disadvantage with grinding a little more. Either way, you’ll be able to make it to the end of the game with whatever familiars you like. As you progress through the game, you unlock more and more abilities. You won’t be able to utilize alchemy to combine ingredients to make the best items until around ten hours into the game. This being a JRPG, there are of course optional quests for you to take on. These quests generally come in two self-explanatory forms: bounties and errands. Errands are posted on bulletin boards in each town and require you to do tasks for the people of that town. The tasks range from using magic to borrow kindness from one person and giving it to another, to gathering ingredients to make the best tikka masala, to helping that dude WHO IS CONSTANTLY LOSING HIS DIARY AFTER HE PROMISED LAST TIME THAT HE WOULDN’T LOSE IT AGAIN, LIKE DUDE SERIOUSLY NOT COOL! Ugh… Oh yeah, so bounties are obtained in the same way and require you to go out and defeat strong familiars. Both bounties and errands reward you with items and merit stamps. Earn 10 merit stamps and you get a merit card. You can then redeem that card (and sometimes more than one) to get various perks to help Oliver on his travels. For example, one of the first things I did was make sure that I got two merit cards so I could upgrade Oliver’s running speed because, oh man, that boy was walking slooooow. Which leads me to my next point. The progression system here is great. Initially, you’re only able to explore the world on foot and it takes quite a while to get from one area to another. As you progress you gain spells that help you explore hidden paths in places that you already visited. Eventually you gain the ability to travel by ship and, ultimately, you end up able to fly around the world. As we play, we experience the benefits of Oliver’s growth. For those who want to go even deeper into the lore of the world, we are given a Wizards Companion which has an insane amount of information in it; much more than the casual player would be able to synthesize. As you progress in the game, blank pages in the Companion start to fill up and you can learn more about the vastness of this world. Seriously, you could dedicate a good amount of time just reading the companion. Hell, Level 5 used to actually sell physical copies of the book and you can find PDFs of it easily online.

I’ll leave you with this. What makes the game work so well is the fact that it can be as hands off or as involved as you want it to be. You’re essentially put in charge of how much work you want to put into the game. On one end of the spectrum, you can power through the game, only rarely picking up errands and bounties along the way and only focusing on leveling your default familiars. On the other end you can juggle moving forward with the story while strategically leveling up your familiars in areas where you can catch more familiars while making sure to gather materials for your alchemy in areas where you can complete errands and bounties. No matter where you fall, you’ll be able to complete the game to your own satisfaction. Build your own adventure. For platinum hunters like myself, or just for those who like to complete games to their fullest, this adventure is easily 100 hours long. For more casual players, expect a 40-50 hour experience. For those who missed this game on the first go-around, do yourself a favor and give this version a shot.