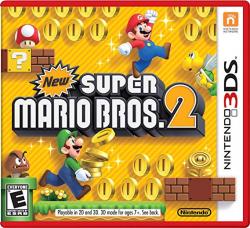 The game is generic, but for no reason this time. With New Super Mario Bros. 1, it made sense, the last original 2D Mario game was Super Mario Land 2 on the gameboy, which was released in 1992. They wanted to keep the game simple.
Does the coin gimmick actually matter? No, also, please don't collect a million coins, the reward is not worth it, and if you try to collect 10 million coins, i will classify you as a maniac.
Is the level design good? Yes, but the game is way too easy now. And the fact that you have way more lives because of the coin gimmick just make this game even easier.
Does this game have original bosses, like New Super Mario Bros. 1? Nope, the bosses are Koopalings (returning from New Super Mario Bros. Wii).
Are the power ups good? No, yes, kinda, it's kinda hard to explain. They are just op version of other power-ups, however, that makes them good power-ups because the original power-ups already felt good and the op version feel the same, but just like i said, OP.
Is the multiplayer good? Not really. The multiplayer on New Super Mario Bros. Wii with 2 players worked fine because the camera on that game was always zoomed out. Not in this game tho, so it's even more chaotic.
Also, there are no Minigames and the Mega/Mini mushroom are still useless, and the final boss isn't underwhelming af, it's actually a good final boss, not amazing, but good.
Verdict
HylianBran and alexander1970 like this.
Like this review