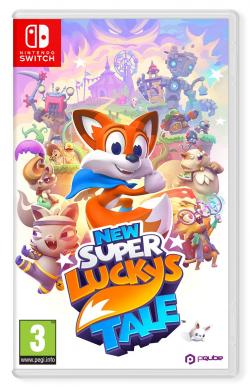 Nintendo hardware has always been a fond home of quality 3D platformers, but does Lucky have what it takes to stand proud next to the titan that is Mario?

Lucky is a name I didn't know. Debuting in a launch title for the Oculus Rift in Lucky's Tale, and later coming to PC and Xbox One in Super Lucky's Tale, the fox eluded me as a mediocre attempt to kick off a new cutesy mascot platformer. I dismissed him outright, but looking back now, perhaps I was wrong to do so.

Taking a leaf out of Mario's book, Lucky returns in a confusingly titled game for the Switch, New Super Lucky's Tale. What makes this particularly odd is the fact that this is, as it happens, not a new tale, instead expanding upon the original ideas shown in Super Lucky's Tale. While with many a different game, this would usually mean a few updated graphics and maybe a bonus level or two. Our foxy friend however finds himself embarking on a completely different adventure, following the same story and the same overarching structure. As an outsider looking into the series, I feel it best to describe it as a do-over, Playful Corp's realisation there was something more lurking in their previous ideas that they just wanted to take in another direction. Though I can't speak of the original game's quality, I can say this version does not disappoint. 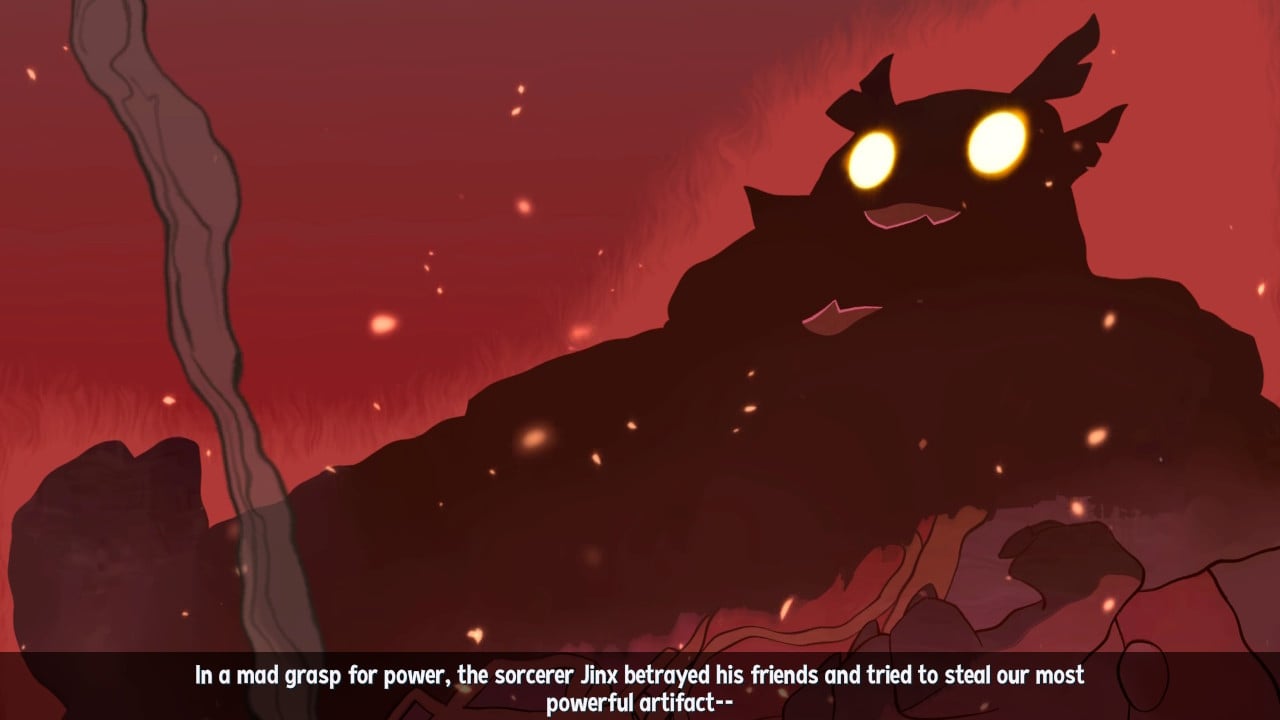 Opening with a fully-voiced cutscene to set the stage, Lucky starts out strong. The antagonist, Jynx the cat, tried to steal the all-powerful book of ages. He fails, and Lucky gets pulled into a separate world with its now-separated pages after a bit of a scuffle. The general cycle sees you be transported to a world, collect some pages, beat one of Jynx's crew, and head to the next world, eventually ending up in a showdown against the big kahuna himself. The gameplay loop is simple and familiar, evoking fond memories of Super Mario 64. Each of the game's six worlds are broken down into self-contained levels, along with a hub area; to draw an easy comparison, the castle and its paintings. Each level has four pages up for grabs: one for completing the level, one for collecting 300 coins, one for finding each letter of our protagonist's name, and one secret one, often hidden behind an optional puzzle or platforming challenge. Ranging anywhere from traditional 3D platforming, to short questlines, to 2D platforming, and even runner sequences, the levels constantly found a way to keep me engaged. No two levels felt the same, each surprising me in their ability to stand out in what I otherwise assumed to be a generic by the books game. 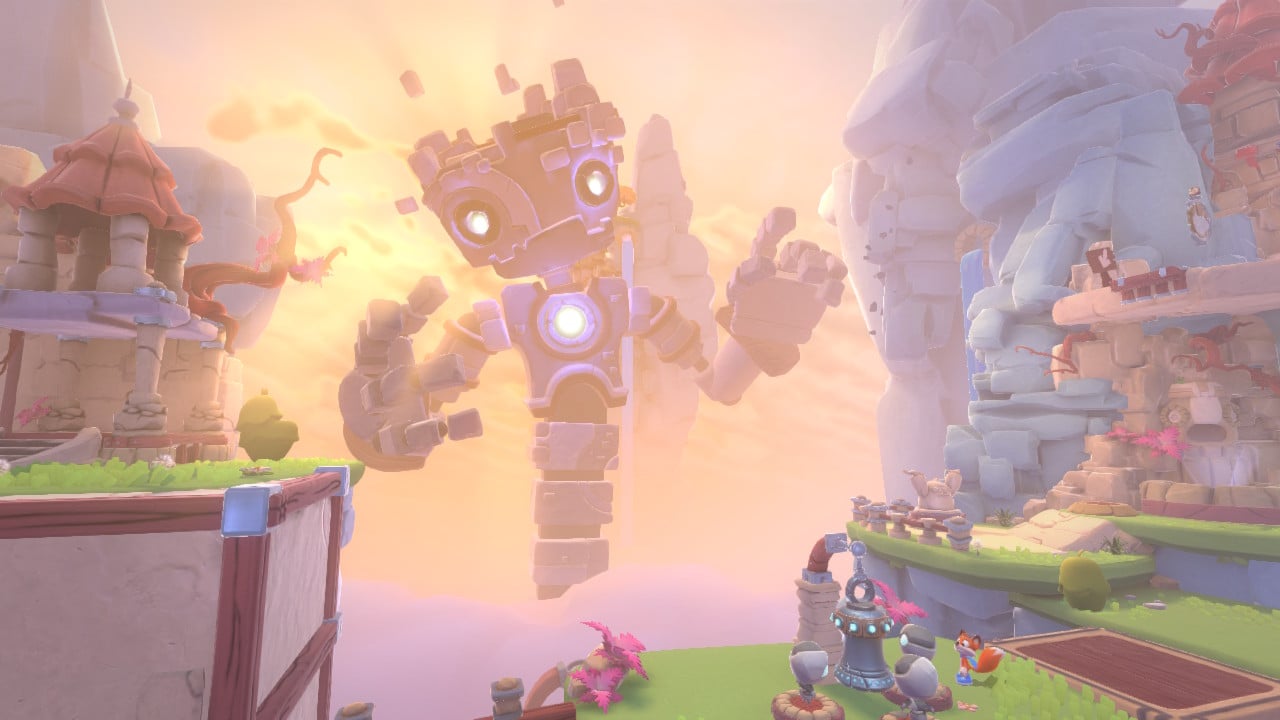 Graphically and stylistically, the game oozes charm. Each world has a theme, with each level revolving around a central idea matching the theme. For example, in the second world, Veggie Village, you have a town of farming worms facing the threat of machination as the Kitty Litter's genius inventor Tess moves in to make things more efficient. From this basic setup, you have a good mix of interesting ideas. There's oversized chickens that need to be freed from mysterious devices, there's a folk band that need to be reunited, you help the Carrot King himself oust the garlic menace—there's even a 2D level focused on avoiding what I can only assume to be spiky fruit. To fall back to a simple word, it's fun—brilliantly so. I can without reservation say I haven't had this much fun with a 3D platformer since Super Mario 64. There's life in every part of the game, from the Sims-esque garbled and yet somehow emotive language, to the bizarre themes and self-serving yet ever-amusing Kitty Litter, to the challenges and quests presented to you in levels. It's a game a child could pick up and an adult could enjoy, and a large part of that enjoyment stems from the satisfying movement. 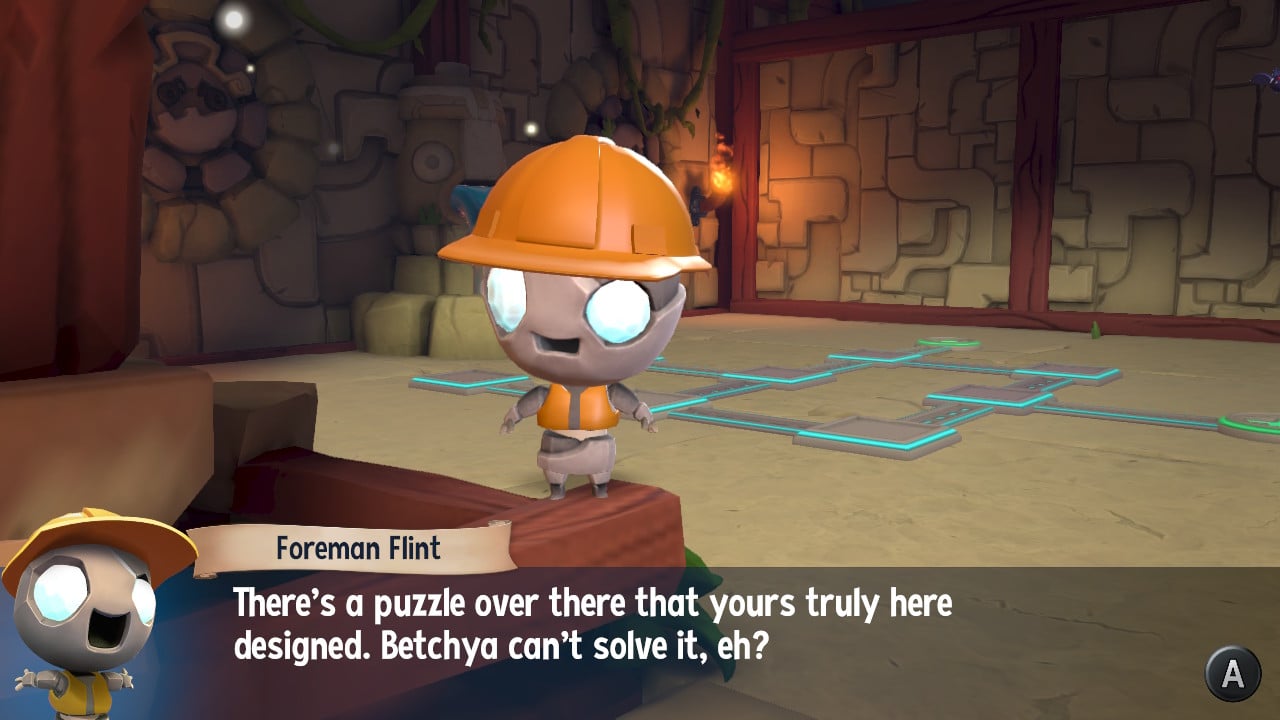 There are small puzzles and challenges littered throughout the game too!

To me, any kind of platformer starts and ends with how it controls. Your character might be unresponsive, have a dissatisfying jump, an ever-so-slightly off hitbox, there could be a lack of feedback—any number of minor issues can completely ruin an otherwise brilliant game. Coming from, as you might expect, the stunningly refined Mario series, you get a taste for a control scheme that just works. You want a reasonable jump, you want to turn quickly, to hear a fun sound effect as you stomp an enemy. There are things you take for granted as standard, and there are things you really don't expect other platformers to nail in quite the same way. Lucky feels great, but it's not as seamless an experience as a Mario game might be. You have a double jump, a tail swipe, and a dive to burrow underground or slide along solid floors. That's it; on paper there's little to learn, with each part of the moveset being introduced in the first level quite enjoyably. The jumps feel great, providing ample height and distance, with tail swiping enabling you to go just that bit further if timed properly. Burrowing is fluid and natural, the animation weaving seamlessly in a way that makes you just want to keep doing it. Where you'll perhaps need a moment of adjustment is in the movement itself—turning in particular. In what I assume to be an attempt to create a more fluid sequence of animation, you turn in an arc, in oppose to turning quickly on the spot. It's a small difference to what I'm used to, but it was enough to throw me off until I got my act together. You definitely get used to it within a level or so, but I had a good bit of frustration for the first ten or so minutes as I learned the basics.

Outside of that minor complaint, there's really only one negative I can think of with New Super Lucky's Tale: loading times. From starting the game to getting to the main menu, it took 38 seconds. From the main menu to loading my current hub world, it took 35 seconds. From my current hub world to loading one of its levels, it took 18 seconds. It adds up, but for much of the game, it falls to the back of your mind. Around 20 seconds between levels isn't ideal, but the moment of respite to enjoy some well-written messages in the loading screen at least kept me entertained. That was, at least, until I hit my first runner stage. For those not familiar with the format, this kind of level sees you constantly moving forwards, the challenge lying in timing your jumps properly to collect everything as you go. As a completionist, I wanted to collect everything, but found myself greatly frustrated at the lack of option to restart the level. Missed something? 20 seconds to load back into the hub world, followed by another 20 seconds to reload the level. It's here the frustration kicked in, and it's here I really became aware of the loading times. It's a shame to see the game held back by such a trivial thing, but the more you play, the more you start to realise the wholesome messages of Greg the Mailgolem can't keep you occupied forever. 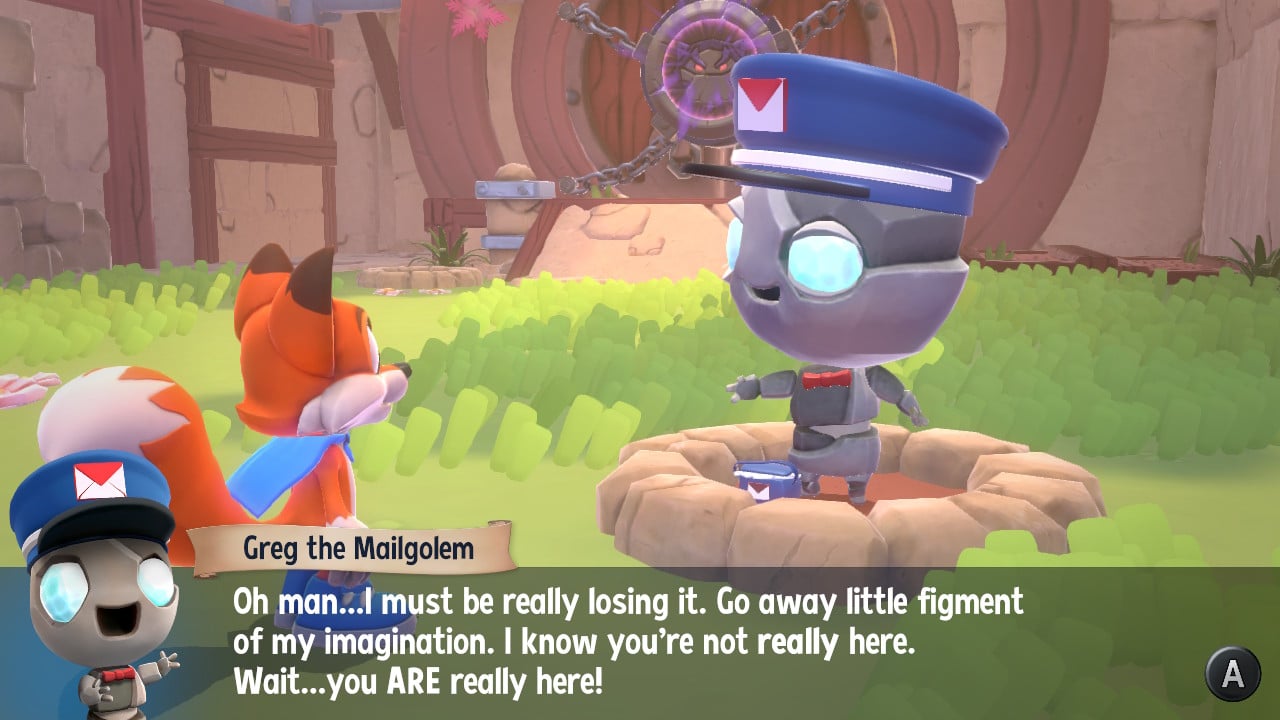 Our wholesome Mailgolem and savior.

All in all though, New Super Lucky's Tale is a great game that genuinely shocked me. Going in expecting some malformed and unintentionally nightmarish mascot character awkwardly stumbling through generic levels, the charm offensive and overall polish caught me off-guard. This is a game that belongs on Nintendo platforms, and I can only hope it sees a proper sequel, even if it takes some time to load.

Verdict
You, bonoboy, raxadian and 9 others like this.
Unlike this review