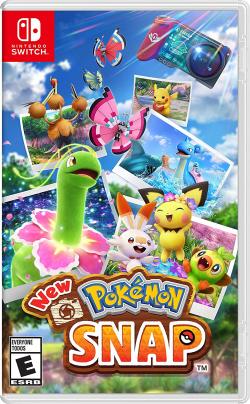 New Pokemon Snap is the latest spinoff game in the Pokemon franchise, a successor to the popular N64 Pokemon Snap. Developed by Bandai Namco, does it stay true to the Snap formula? Let’s find out.

Remember Pokemon Snap? The N64 spin off that had you go and take pictures of Pokemon in various environments? That finally got a sequel! As a huge Pokemon Snap fan, I was beyond excited to see Nintendo finally listened to their audience and approved a Snap successor after some 22 years. As a kid, Pokemon Snap was one of the few games at the time that I’d no-life for hours and hours at a time. Being able to see all these Pokemon from the games in their environments, living and interacting with each other in ways that you simply could never experience in any other game at the time was magical when I was a kid, and since then I’ve longed to see a new game with modern Pokemon and different environments. Finally, Nintendo has delivered, with Bandai Namco Studios at the reins of this particular entry into the series. So how does it hold up?

To be brutally honest? It’s not great. I’ll get into my complaints in a little bit, but first I’ll take you through the general plot of the game. Starting up, you get to choose between eight different player characters, four guys and four girls, which are basically all generic-y Pokemon models that you’d expect to see from Nintendo these days. It's a little disappointing you still can’t just design your own character, but whatever. After that, you’re given a nice looking cutscene that introduces you to Professor Mirror and his assistant Rita, as well as the new Lental region you’ll be going through that was designed for this game. Unlike the N64 title where the story was basically “hi I want to take pictures k bye”, New Pokemon Snap kind of has an actual plot. Avoiding spoilers, the long and short of it is that you’re helping Professor Mirror investigate the “Illumina phenomenon”, where various Pokemon in the Lental region are known to have some sort of special glow at night. It’s not going to win any awards, but it’s a good enough of a story for something as simple as taking pictures of Pokemon.

After some quick tutorials to introduce you to the mechanics, you can finally get on your way to the first area in the “NEO-ONE” hover vehicle, a nice nod to the ZERO-ONE from the original. Gameplay for New Pokemon Snap is pretty much identical to the previous game. You go through each area in the game in an on-rails fashion, with the goal being to take pictures of Pokemon in their natural habitat to add to your “PhotoDex”. You’re awarded points for a Pokemon’s pose, size in the picture, what direction the Pokemon is facing, its placement in the photo (is it centred etc), and if there are other Pokemon in the photo. There are also four star ratings, which are mainly determined based on the pose a Pokemon is doing at any one time. One of the secondary goals of the game would be to get pictures of Pokemon in one-four star ratings, and boy is that...not great. You can “manipulate” Pokemon in each level with a variety of tools to change their pose, with some new like “Illumina orbs” to temporarily force Pokemon into an Illumina state, and some old like  Apples Fluffruit and the Pokeflute “Melody” app on your camera. There are also Day and Night versions of each level, which is a great addition to the series that lets you experience a better variety of each Pokemon for each level. Once you submit your photos, you’re also given the option to save them to your own personal album, allowing you to edit photos in a variety of ways, including brightness, blur, focus size and focal point, you can apply various filters, frames, and stickers, and add a caption if you really wanted to. These photos can then be shared online, where they can be rated and liked by other players. Overall this is well and good; the mechanics still work quite well today and the variety of Pokemon in each level is basically exactly what I was asking for since I was a kid.

What’s not good, however, is the rating system. Particularly when choosing the photo you get to show Professor Mirror. Just like the original game, you only get to choose one photo of each Pokemon you photograph to show him that gets logged. This worked fine and dandy in the last game, since you only had to choose the best photo, but with New Pokemon Snap this is honestly one of the worst limitations of the game. If you decided to take multiple pictures of a Pokemon on your route, and end up getting multiple star ratings in one run...you can only choose one of those ratings. You then have to go right back out to the course and try and snap a photo of that Pokemon again to get your other star rating. And again. And again. I’ve probably done the first level of the game at least 30 times so far, and I still don’t have all four pictures of every Pokemon in that level yet. The grind in New Pokemon Snap is unreal, and is easily the worst part of the game, especially when you consider there are over 200 Pokemon total in-game, meaning you’ll need to take at least 800 different pictures if you want to fill out each PhotoDex entry. Sure, you don't necessarily have to get all four star ratings, but you still have to get enough points to progress in the game. And sure, the original had its own grind, but you played each course maybe 4 or 5 times max to get your one photo of each Pokemon whenever you’d unlock new tools. The solution to this problem isn’t even that difficult, simply let the player choose one photo of each Pokemon in each star rating, it would make the game MILES better. To make matters worse, you’re only limited to 72 pictures per level! Back in the N64 days this made sense, you only had so much RAM to work with to store pictures, but this is 2021 guys. Why is my super fancy high tech digital camera limited to only 72 pictures?

Graphically speaking, things are looking up! Most of the time anyway. The majority of the models that you’ll see for Pokemon look quite good close up, and the levels overall are quite good looking. You’re going to see some jaggies here or there, which is unfortunate but nothing catastrophically bad. What is catastrophically bad, however, is a lot of the textures in quite a few areas. Some of them look like they’d fit right in with the N64 game, and we’re not even talking about things that are just far away, these are textures you’re right up and seeing (and as a note, all screenshots were taken in docked mode). Previewing photos that you send to the professor are also quite low resolution, bizarrely. I'm not quite sure why the previews have to be some kind of 360p-esque quality when you're trying to choose which looks the best but ok. Bandai did manage to keep the framerate at around 60fps... most of the time, but in some areas with a lot of activity (and loading screens, for some reason), you’re going to see quite a few dips, some that must have hit the 40s for a couple seconds. Models in the distance also run at a much lower FPS than those closer to you, which can be disconcerting to see if you're trying to locate some Pokemon off in the distance to plan a good picture of.

So does it live up to 7 year old Tom's expectations? Well...no, not exactly. But that doesn't mean it's a bad game by any means! The variety of the Pokemon and locales is great, and I really enjoy the day-night courses they added to the game, which definitely adds some needed variety to the game. And, while there is a lot of relentless grind, it's not really necessary (most of the time) to if you just want to get through the story and maybe grab some pics of your favorite Pokemon. If you liked Pokemon Snap, you're definitely going to like New Pokemon Snap. If you're new to the series, and you like the kind of "on-rails" walking simulator-esque gameplay and you're a Pokemon fan, you're going to love it. It may be rough around the edges here or there, but it's definitely still worth going through at least once.