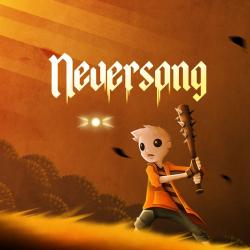 Single player
Local Multiplayer
Online Multiplayer
Co-operative
Neversong is a platformer set in a surreal and terrifying fairytale, but will it go down in the annals of indie game history as a fabulous fable or will it fall into a coma and be lost to time?

Fairytales and fantasy have always been about escape. Likewise, video games are a modern take on the idea of escapism media. The ability to transport oneself into another world--even another body. It is a comforting sensation to take on the role of a powerful hero. When this idea of safety and power and assurity comes crashing down, it is, to put it lightly, discomforting; and it is in this very assault on childhood escapism where Neversong really shines.

Neversong opens with a storybook cutscene, where we experience the life of our protagonist, Peet. Peet is an orphan who befriends Wren, the prettiest girl in town, but after failing to save her from a mysterious white-faced man known enigmatically as “Dr. Smile,” Peet falls into a coma. After waking up, the town of Redwind Village isn’t anything like what it used to be… all of the adults have vanished and now the kids rule as the outskirts of town are haunted by bizarre spider-like insects that attack everything in sight. It is amongst this hellscape that has become of his town that Peet has to solve puzzles and fight vicious monsters in order to hunt down Dr. Smile and save the life of his best friend. 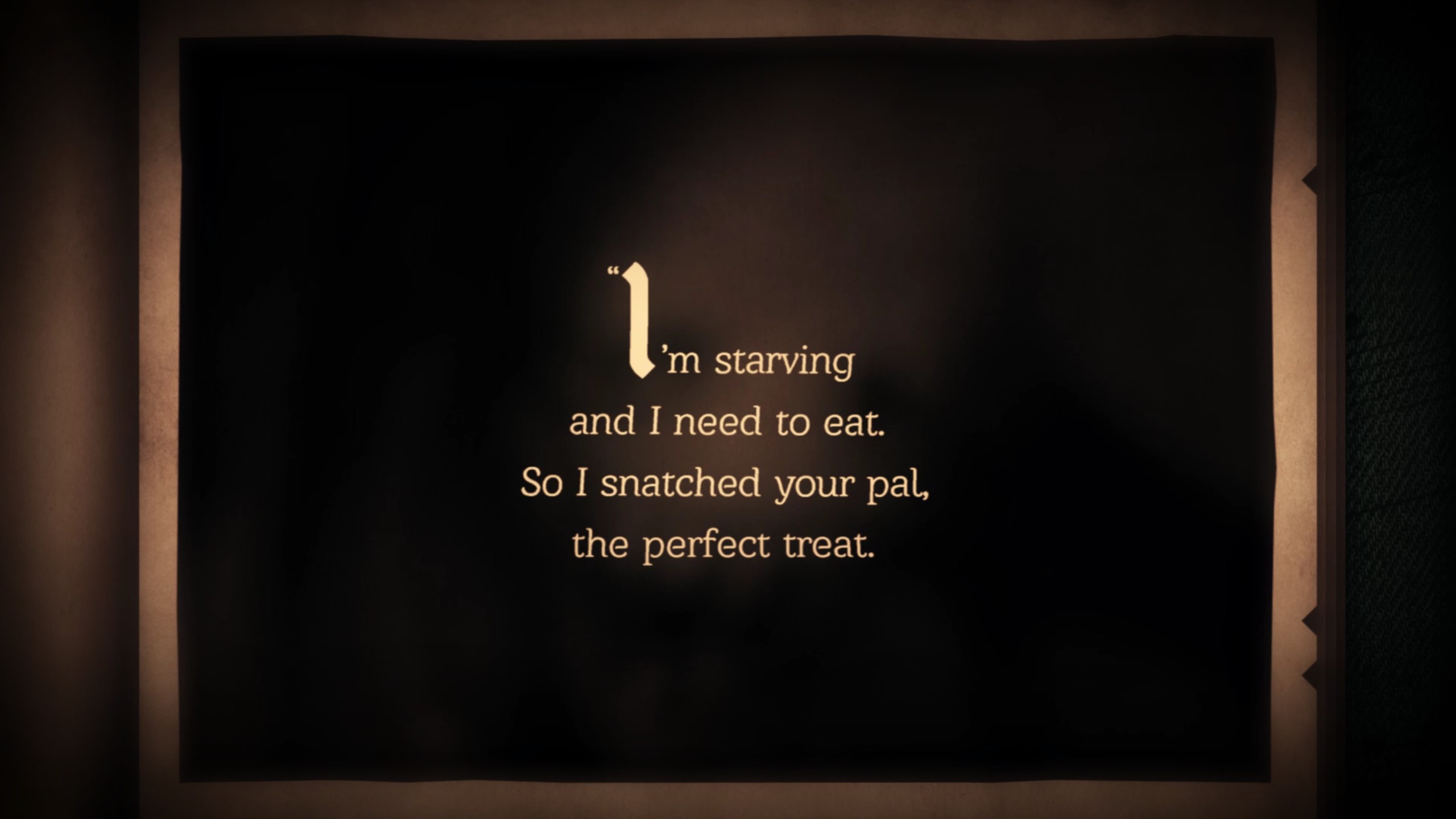 And such is the majority of the context we are offered in Neversong. From here, the game devolves into a series of arbitrary fetch-quests layered inside of fetch-quests like one massive fetch-quest onion. This alone represents its greatest fault, which is the apparent idea that in an artistic video game the presentation and narrative do the heavy-lifting to compensate for the gameplay’s faults.

The gameplay cycle is incredibly intuitive. You go back and forth between a variety of quirky and charming NPCs, getting hints as to what you need to do for them, traveling around, and finding an item to get another item from one NPC so that another NPC can perform a certain task for you, and over the course of doing everything for everyone, you wake up a “sleeping monster.” A boss fight ensues, after which you learn a song. If you return to Wren’s house and play the song on her piano, you unlock a special item, like magnetic gloves to swing on eggs or an umbrella to float on wind tunnels, which grants you access to other parts of the world in order to progress. The gameplay in between gathering and completing every task has occasional sparks of brilliance in platforming challenges and puzzle mechanics, but oftentimes the puzzles you’re asked to solve are, at their worst, unintuitive and poorly-clued, and are, at their best, unimaginative and arbitrarily time-consuming. On top of it all, there's an unfortunate propensity for repeating the same kind of challenge multiple times, and the boss fights, while they make good use of the game mechanics, are incredibly nonthreatening with the primary challenge being that it's never really clear when they’re invulnerable or not. Mix all of this together and the recipe is a game that is on the whole unsatisfying to play. 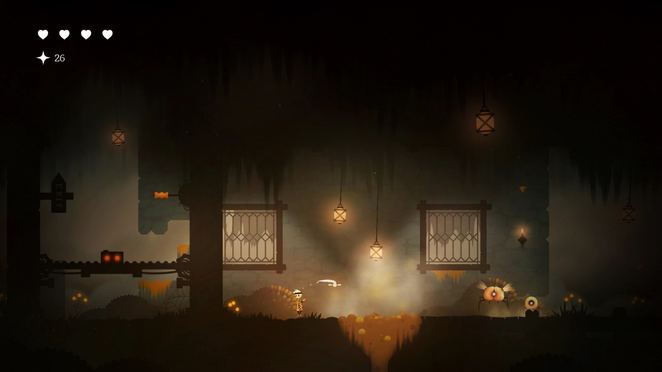 While the gameplay is basically unfun, it’s used to good effect. The game’s primary strength lies in the characters, the atmosphere and the game’s cavalier take on horror. The slogs from one capricious objective to the next do its job of introducing you to a variety of charming NPCs in a variety of situations. Characters range from commonplace but lovable archetypes like the punching bag scientist who does everything to avoid being beat up to the disturbing characters who seem to make it their job to turn their psychoses into a tool for dishing out insults and jabs at Peet at every possible turn, all the way to a boy who is happy that his father tried to murder him so he’d have an excuse to tie him up and hang him from the ceiling.

The NPCs and their reactions to the horrible things going on around them bear many similarities to classic American children’s horror cartoon, Invader ZIM. The terrifying transition of grown-ups into surreal monsters is regarded by the kids as an opportunity to do whatever they please. The horrible conditions of the Blackfork Asylum are subsequently seen as a place that exists to promote their lifestyles. The horror comes from the fact that that which seems to us unnatural is, to the eyes of the characters, totally natural. This promotes a creepy, dreamlike atmosphere and generates a constant feeling that no matter what happens nothing seems quite right.

​
This unnaturalness is a key theme. As previously mentioned, the game takes on a vaguely fairytale-esque aesthetic. The characters all appear made from crafts and even the environments feel as if they were made from strips of craft paper. Fairytales are famously thought of as light fantasy, but the oppressive atmosphere--and the bizarre sense of unreality, the creepy cousin to fantasy--makes something which is often thought of as an escape feel more like further entrapment. These characters and the atmosphere do their part to generate an uneasy feeling, but then nothing ever seems to come out of anything. The characters never move, and the story rarely goes anywhere. And, worse, the conclusion to the story is all of predictable and somewhat underwhelming. The missed opportunities in the treatment of the characters--in the treatment of the issues being explored--the treatment of the gameplay--the treatment of the setting--are all extremely corporeal and can be felt in every aspect of the game and its narrative.

Neversong is a delightfully artistic experience. It promotes a strong atmosphere and presents a cast of overall likeable characters that contribute to the overall tone. However, the lack of any meaningful contribution from any of the NPCs, the unsatisfying gameplay and the anticlimactic and obvious resolution drag it back from heights of greatness. In every regard, perhaps the game would’ve been better served as an animated series, so that the creators could’ve had the time to better explore the world, characters and story without the restrictions of gameplay.

What We Liked ...
What We Didn't Like ...
4
Gameplay
Poorly designed challenges, unintuitive puzzles, a lack of clear direction and nonsense scavenger hunts make it on the whole unfun to play despite occasional sparks of brilliance.
8
Presentation
The aesthetic, storybook style and classic approach to surreal horror make the game artistically delightful and delightfully artistic. The undoubtable strong suit.
5
Lasting Appeal
Despite the strong aesthetic, so much of Neversong was underutilized and rather unsatisfying. The game doesn’t feel like anything I’ll ever return to, and mostly made me nostalgic for similar--but better--series.
5.5
out of 10

Neversong is a litany of missed opportunities, poor design choices and an underwhelming story. However, anyone looking for an inexpensive and time-respecting source of chills and nerve-tingling horrors will find something to enjoy in the journey--if not the destination--of Neversong.
Reactions: Ericzander and relauby
Share:
Facebook Twitter Reddit Pinterest Tumblr WhatsApp Email Share Link