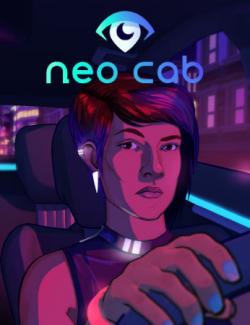 Neo Cab is a cyberpunk visual novel about a woman trying to find her lost best friend while finding her footing in a new city.

Most cyberpunk stories are bleak and dreary, using a dystopian society to warn us about the path we’re headed on as we become more dependent on technology controlled by multinational corporations. Chance Agency’s Neo Cab takes a different tact, constructing a world that’s more familiar and less frightening than a typical cyberpunk setting.

Set in an unspecified time in the future, Neo Cab stars Lina Romero as she moves to the city of Los Ojos to reunite with her childhood best friend Savy. When Savy suddenly disappears, Lina must use her limited contacts in the city to solve the mystery. Detective stories are a cornerstone of the cyberpunk genre and while the idea of focusing on a cabbie who relies on her passengers to learn the city is interesting, the mystery here is unsatisfying. The path to finding Savy is a little too convenient, the breadcrumbs dropped along the way are not that intriguing, and the reveal is not particularly exciting. Neo Cab falters in its genre elements slightly here, but the atmosphere is set up expertly with a bass and synth-heavy retro-80’s soundtrack and a city that’s depressingly bright, bathed in a neon sea of lights and TV ads. 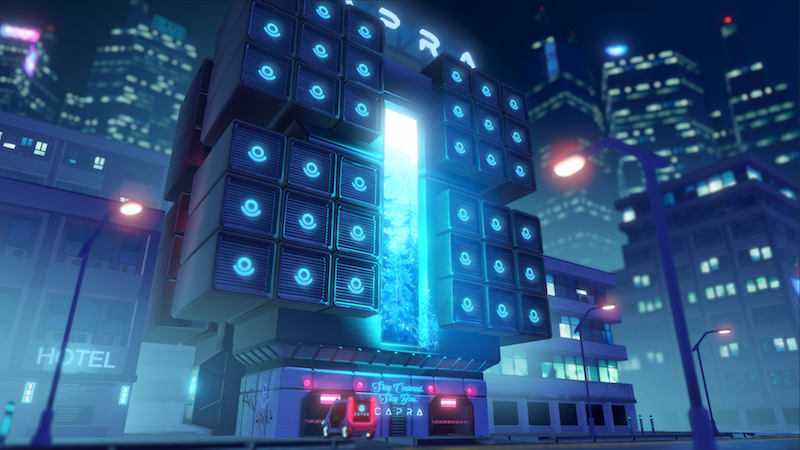 Where Neo Cab excels is its character and world building. While the mystery of Savy’s disappearance isn’t all that compelling, the exploration of lifelong friendships as Lina copes with not having Savy is evocative and pays off beautifully in the climax. Solving Savy’s disappearance is also only a small part of the Neo Cab experience. The rest of the time, you’ll be talking with your passengers, learning their stories and about the city of Los Ojos. Believability is sometimes stretched with the questions Lina asks, but the picture painted of Los Ojos and its residents is vivid. Megacorporation Capra looms over the city, with its hand in the pocket of the police, its cryptocurrency having all but replaced the U.S. dollar, and its technology pilfering the data of helpless users.

Despite living in such a nightmarish world, your passengers are still incredibly relatable. Rather than casting its characters as sheep herded by Capra or desperate warriors trying to end the tyrannical reign of the corporation, as lesser cyberpunk stories do to artificially increase the menace of their antagonists, Neo Cab makes its characters' struggles against invasive technology and injustice mirror our own. When they struggle to find a balance between trying to be a good person and being insufferable about social issues, or feel guilty about indulging in Capra’s offerings, it resonates and makes the world feel that much more plausible. The tone is kept light with a few gags throughout (“Do you like what I’m wearing? I can’t trust my mirror anymore. They’re just programmed to say what you want to hear”) but these moments also serve to ground the characters and make them feel like real people rather than just delivery methods for whatever issue the writer wanted to tackle.

There are a lot of great stories in Neo Cab and to try to touch on all of them would only do them a disservice, so I'm going to talk about my personal favourite. Aganon is a worshipper of Metawopian the Pain Worm, a ravenous, subterranean worm that feeds on pain and misery, and he's recently founded a new chapter of his cult in the city. It might seem like just a dark joke, that Los Ojos is so miserable that such a cult could take hold there, but from the outset it’s clear that there’s more to Agonon. He’s joyful in his sadness, sticking his head out the window and howling, free to fully embrace his emotions because Metawopian gives his pain purpose. As time passes, it becomes clear that Agonon and his followers are drawn to Metawopian because they are trapped in their lives, not knowing how to escape their sadness, and the best way they can think to cope is to stop fighting, to give in to this absurd meaning to their pain Metawopian offers and embrace the community around him. 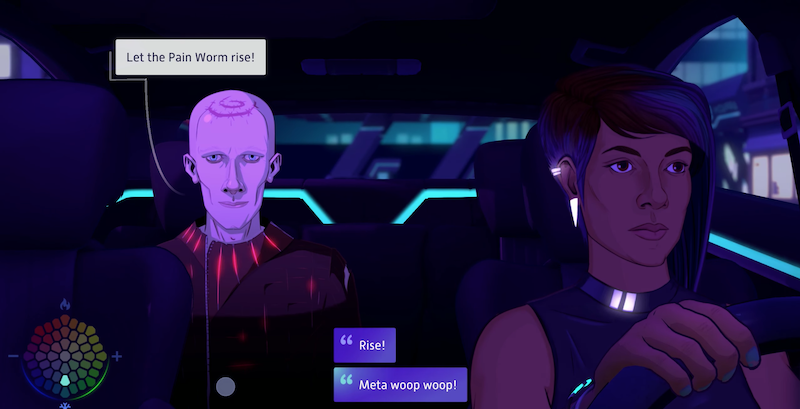 The second time you meet Agonon, he’s stressed due to the success of the cult and the shame he’s feeling for being proud of it. There is a dark irony to this that the game plays with, but again, the underlying emotions are immediately recognisable. Agonon helps people cope with their pain and with so many people still suffering, he believes it’s selfish of him to be happy, and it impedes his ability to help others. With the state of the world today, there are people who are overwhelmed by negativity and feel guilty about being happy, unable to recognise that it’s unrealistic to take on the world’s problems and that they need to make time for their own mental well-being. Lina sees this in Agonon and makes an effort to reach him during their short ride together.

While the game isn’t sappy enough to have Agonon change on the spot, Lina’s effect on him is apparent and it’s a touching bit of real human connection. It’s in these moments that Neo Cab truly sets itself apart. By emphasising people’s capacity for empathy on the same level as their capacity for greed and corruption, Neo Cab becomes the rare cyberpunk story that doesn’t let its pessimism about our dependence on technology overshadow its belief in the fundamental decency of human beings.