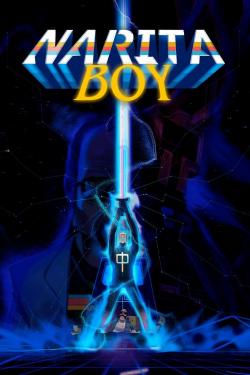 “Neo-retro futuristic” Metroidvania game Narita Boy is now available on PC and consoles in all of its synthwave and hand-drawn glory. Is it as glorious as it sounds?

It’s the ‘80s and Lionel Pearl Nakamura’s hit console, Narita One, and its flagship game, Narita Boy, are flying off game store shelves worldwide. Unbeknownst to gamers, including yourself, an entire civilization is thriving within the game’s code. But in this Digital Kingdom, law and order is under threat, as the evil Sorcerer HIM is back with his Stallions and plans to take control of the region while destroying the memories of Lionel Pearl, The Creator.

If The Creator permanently forgets his memories, the Digital Kingdom will be lost while its inhabitants will be subjugated to HIM’s darkest desires. In a bid to prevent this catastrophe, Motherboard, and her agents launched the Narita Boy protocol; and it just so happens that you are the chosen one to get sucked into the code and save the Digital Kingdom.

To do that, you will have to travel across the Kingdom’s three regions to find the 12 remaining Totems that hold The Creator’s memories and piece their code together while defeating the Stallion menace impeding your way. Only by unlocking those codes can the Creator retrieve his memory and save the Digital Kingdom.

If the in-game lingo used in this introduction felt a bit disorienting, I don’t blame you as I felt the same way for the majority of the game. Narita Boy is a game that has no qualms in indulging in its lore. Right off the bat you are thrown in-game game jargons like the Trichroma, Motherboard, Hackernauts, the House of the Red Beam, Brother Programs and more that can easily feel overwhelming.

But this shouldn’t discourage you as those puzzling terms fit together as you progress and they make sense if you consider their origins. Additionally, unlocking Lionel Pearl’s memory provides an interesting way to learn more about this cryptic character from his birth to the present and how his experiences influenced the game you are living in. 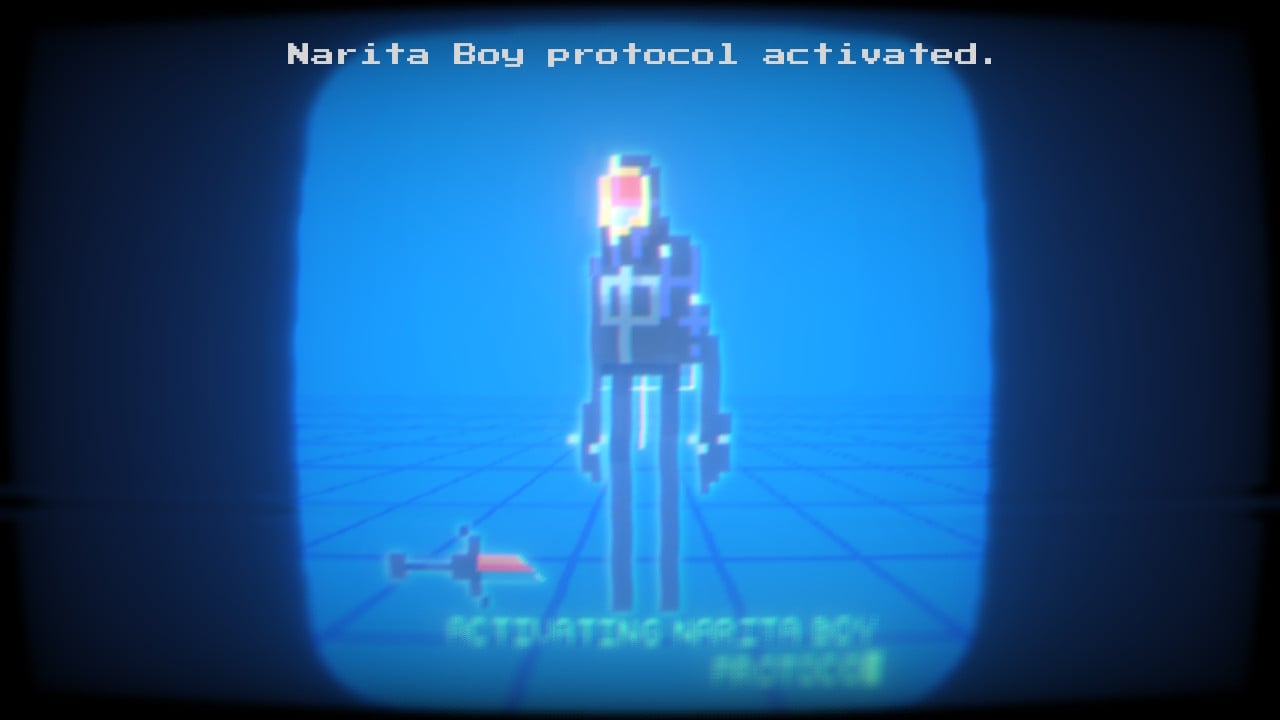 Studio Koba tried to be immersive in its first game by expanding on its lore with its presentation and the interactions you have with NPCs. Narita Boy vividly depicts that its game world has a culture of its own where some religious mysticism plays a central role. You’ll see priests clapping to some unsung mantra, others bowing to an altar where you teleport to while others yet are listening to preaches while chanting some code lines under a tree. The culture is also unashamedly bathed in a synthwave aesthetic from the Daft Punk-esque soundtrack to the neon-filled environments; and if you have a soft spot for this style, you’ll be served with eye and ear candies.

Indeed, this game’s indie developers really hit the bullseye on the presentation department and the effort they put in it shows. In essence, Narita Boy feels like Tron meets Sword & Sworcery but packs its own original flair. In addition to code-inspired names and lore, you will explore forests, venture in abandoned towns and converse with bartenders while visualising all of these through the imaginary lens of someone who’s been teleported to the binary world on a silicon chip.

Moreover, Studio Koba says that each and every asset of the game was individually designed and painted with hand-drawn animations resulting in over 20,000 sprites; and each visual FX frame was also animated one by one. It’s easy to get lost in admiring the terrific work they did with setting the game’s universe and atmosphere. And if you want that extra ‘80s feel, there’s a CRT filter to fix you up. 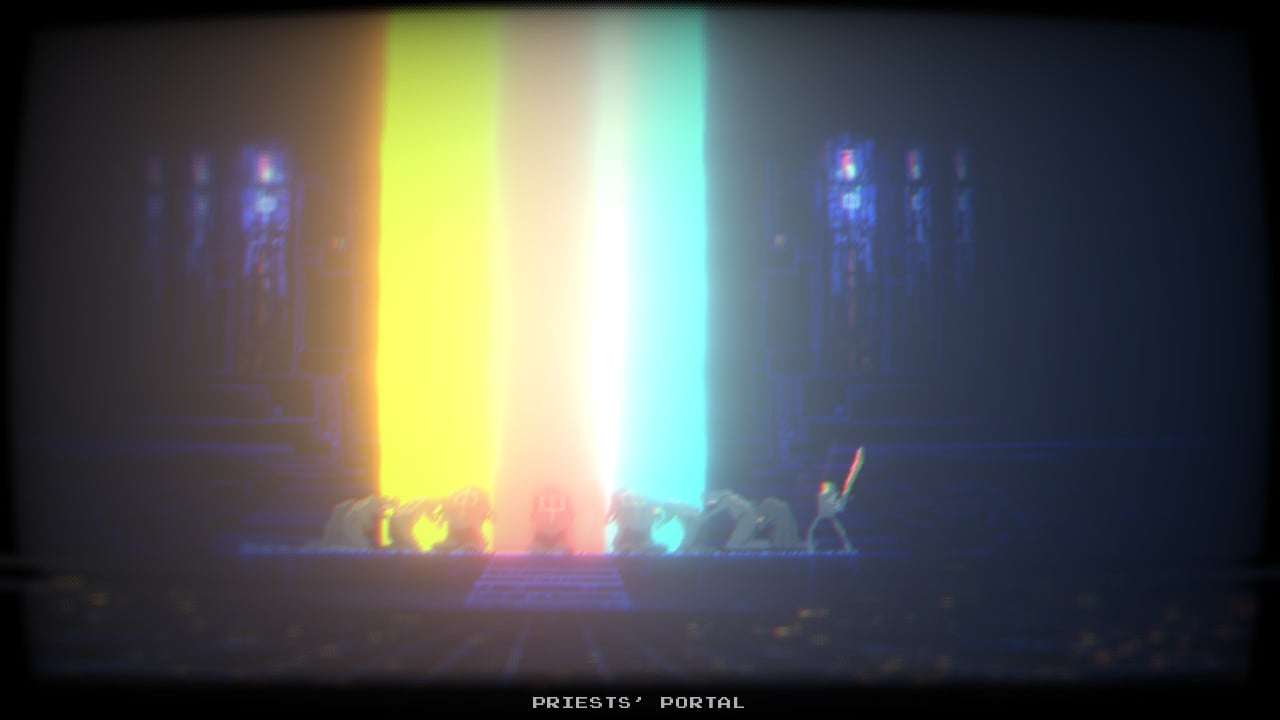 Of course, you won’t just be looking at this game--you'll be playing it. As a Metroidvania, Narita Boy is equal parts platforming and equal parts combat. The latter feels satisfying, especially with the hand-drawn animations that viscerally depict how you decimate HIM’s Stallions one after the other.

Studio Koba tried to keep things fresh by introducing new abilities throughout the game that are stored in floppy discs. At first you’ll get the Techno-Sword that can also be used as a shotgun and be able to use a powerful laser beam once its gauge has been filled. Then you’ll learn how to dodge attacks and bash enemies’ shields that can help in making for fast-paced combat sessions. And in each realm that you visit, you’ll find a “dude” of the respective house whom you can summon to assist you momentarily in battle.

At other times you will ride a horse that can charge through the Stallions; wear a mecha suit that can impale enemies; surf on a floppy disc while dodging obstacles and even get turned into a stag. These instances are short-lived but definitely fun and add some variety to the gameplay, even if for a short period of time.

Variety is also evident among enemy types with new ones that get introduced every so often from dragons to exploding Stallions. These and bosses come with techniques of their own that will test your agility and quick-wittedness to emerge victorious. Some might require a few tries to know their weaknesses but aren’t as challenging as in traditional Metroidvania games. That’s because most enemies have a specific way to be dealt with and if you come across them again, you can relatively easily off them. 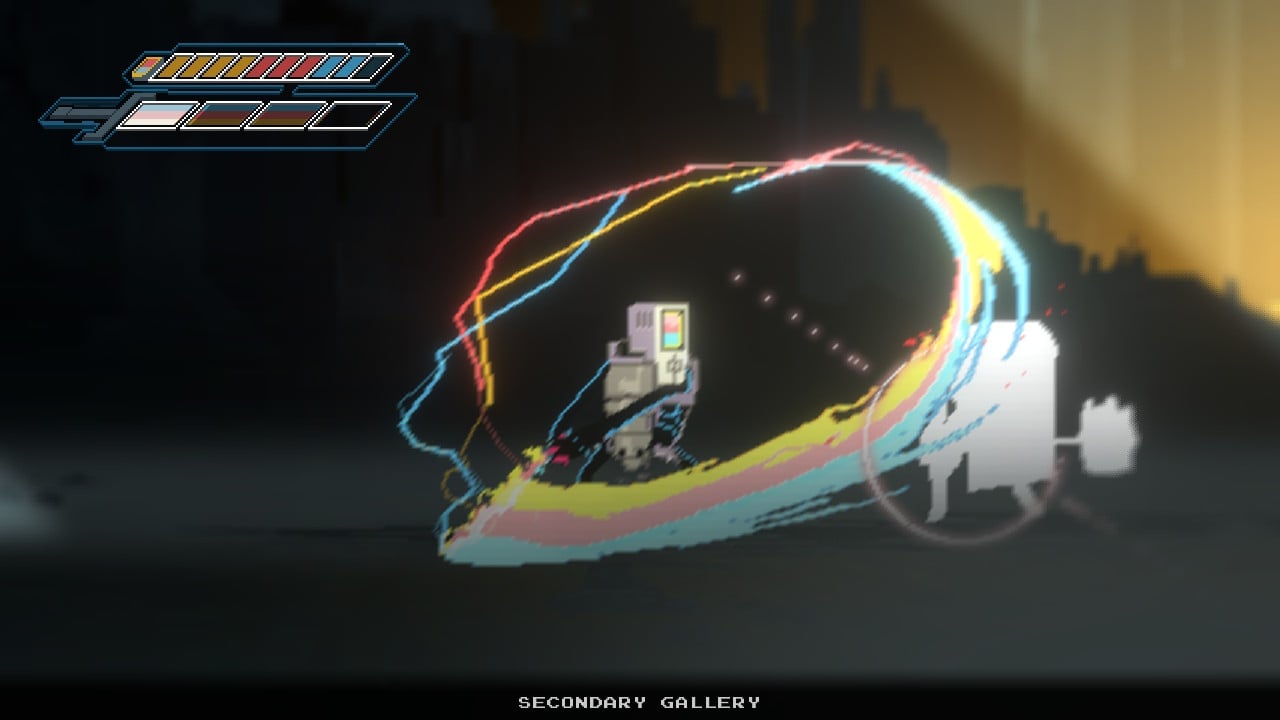 Also not very challenging are the light puzzle sessions that only require you to explore your surroundings for clues. Other than a few rare “side quests” that don’t require much deviation from the main plot’s path, the game is pretty much linear. Exploration is itself a major part of Narita Boy.  You’ll explore your surroundings in a platforming fashion which helps flesh out the universe and is what you will be mostly doing outside of combat. But here again the game focuses heavily on its lore, with NPCs using the Digital Kingdom’s own jargon a bit too much to the point that it sometimes gets irritatingly disorienting.

For instance, I was lost looking for the Servo Horse after gaining the key to its location as I forgot where I encountered its stable. Only after trying every room in the region that I already visited did I come across one that has a locked door and I discovered that’s where I had to head. There are several such instances throughout the game and I found myself asking questions like “where was the Tourist Information Center again?” or “remind me where to find the Techno-Guru or did I already meet this person in the first place?”

While I get that the game wants you to take it seriously and immerse yourself in its universe, this approach isn’t so well executed due to the lack of two items that would easily fix these issues: a map and a journal of sorts. The latter could help refresh the player’s memory regarding the locations, characters and also be used to flesh out the lore while toning it down with the exposition that the NPCs seem to love to indulge in. How else can I recall who King *NumStr the Horseman is or what is this Trifurcation that everyone is speaking about? 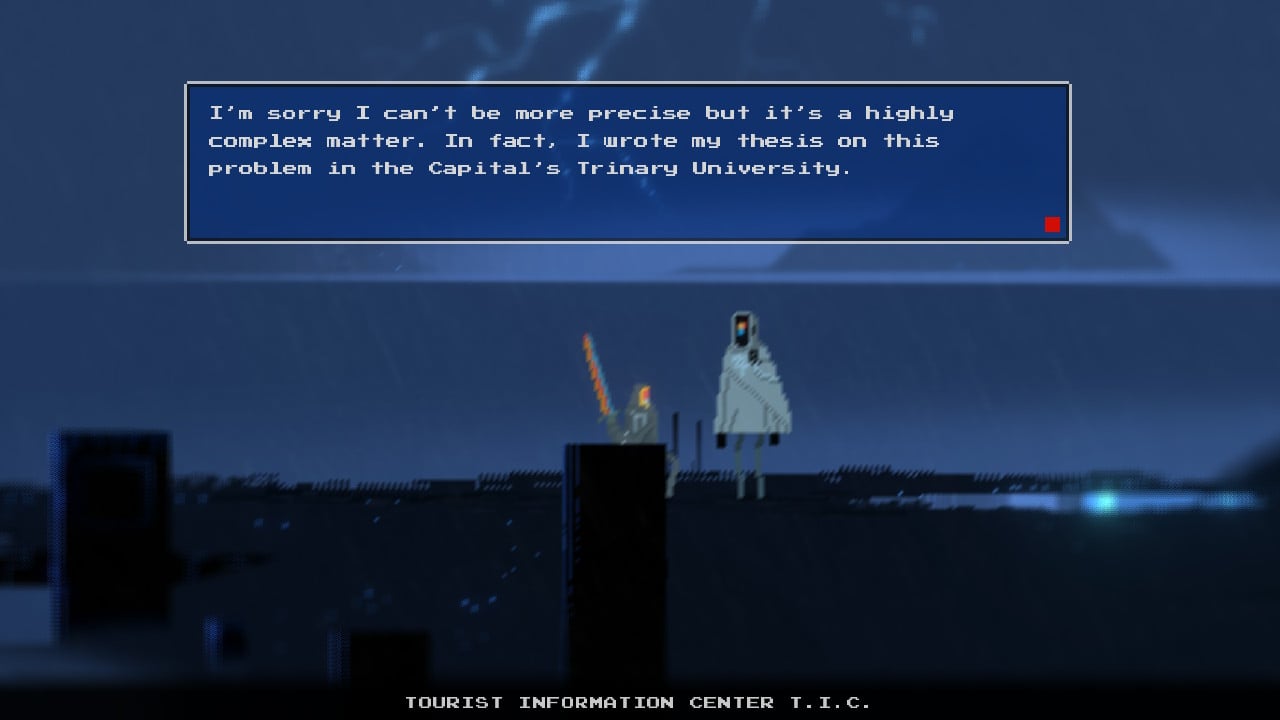 And with a map, I would easily find where the locked door leading to the stable of the Servo Horse is located, especially if I’ve visited the room before. It could help indicate where I have been and where else remains to be explored.

Another thing that a map would have addressed is backtracking. This is an integral and often annoying aspect of the game. You’ll very often have to fetch a floppy disc or meet a character at the far end of a section in order to unlock the path forward, only to have to backtrack to the previous location where that locked door is or path is. Along the way, you’ll have to overcome all of the hurdles you already completed on your way there which include platforming sessions and some occasional combats. These might add a layer of challenge and don’t require you to travel such long distances, but you’ll be doing this so often that it can get unnerving. Even if Narita Boy is inspired by retro games, it could include new mechanics such as a fast travel within a map to reduce the dependence on backtracking.

Moreover, there are scenes that aren’t very obvious in indicating whether you can travel in either direction (left or right) or if there’s a path within the background. You could easily miss areas that aren’t immediately visible and this will force you to scrutinize your surroundings again looking for a passage that might have slipped your attention. Here again a map would have helped in better navigation. 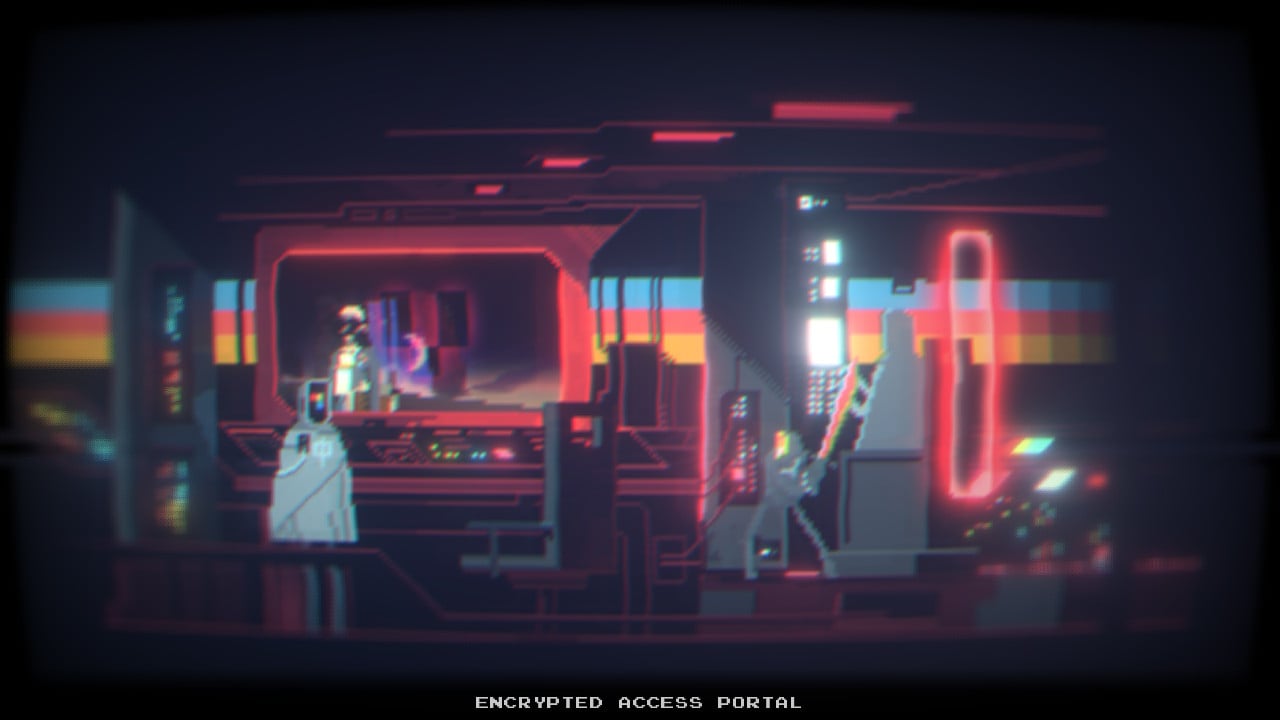 What might have appealed to most gamers when Studio Koba announced Narita Boy back in 2017 as a Kickstarter campaign is likely its characteristic “neo-retro futuristic” presentation. And on that, Studio Koba wholly delivered and you will find this aesthetic from start to finish. I played it on the Switch where the controls felt responsive and I even think that the game is a perfect fit for the platform. It felt great to look at the handcrafted visuals throughout its 6-7 hour duration. There are so many unique scenes and depictions like a pregnant program, a Synth-Sensei or surfing on a floppy disc that I wish the game had a Photo Mode to take closeups of those moments.

If what you’d be doing in Narita Boy were to only take in the aesthetics and atmosphere, the game would be an instant must-buy but then again it wouldn’t really be a game. And while the gameplay feels intuitive and is kept fresh with new abilities and enemy types, its over-reliance on backtracking and over-indulgence in its lore while forgoing simple features like a map and a journal that would address its blatant issues make it a less than optimal experience.

Nevertheless, as Studio Koba’s first release, Narita Boy is a very decent and original indie Metroidvania. It’s beautifully presented but isn’t without some gameplay mishaps that I hope the developers address in their next game and I look forward to what they come up with next.