This game is like Playboy – you’re only really playing it for the story right?

I would wager that just about none of you are expecting this to be a serious review. After all, this is a game that involves clicking a jar of creamy mayonnaise with a dismembered hand until one of four things happen. Either you get tired, you get all the trophies/achievements, you lose function of your hand, or your controller breaks. However I do intend for this to be a serious article about the game and what I believe the implications of its existence will be. I’ll also weigh in on what I believe the developers (Green Lava Studios) may have been thinking in creating it. 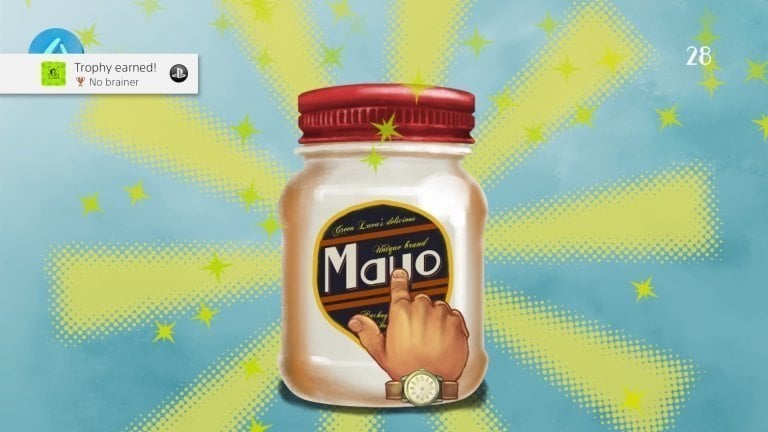 So I’d like to get started with the game itself. My Name is Mayo is available on PS4, Vita, and Steam. The PS4 and Vita versions implement Sony’s crossbuy system, so you only need to buy the game once to play it on both systems. Like I stated before, in this game you will click a jar of mayonnaise… a lot. After a minimum of 10,000 clicks and about 20-50 minutes depending on how fast you mash that button, you’ll walk away with 51 trophies (including a platinum trophy) or 50 achievements on Steam. If you own both the Vita and PS4 that’s a whopping 102 trophies and 2 platinums for you. But that won’t stop the inevitable feeling of regret you will get afterwards for being such a trophy/achievement whore. After all, you spend a whole $0.99 just to get some trophies! “WHAT IS WRONG WITH YOU!? YOU ARE EVERYTHING THAT’S WRONG WITH GAMES TODAY! YOU SON OF A…“ Wait, hold on right there! Should you actually feel that way? More on that later. 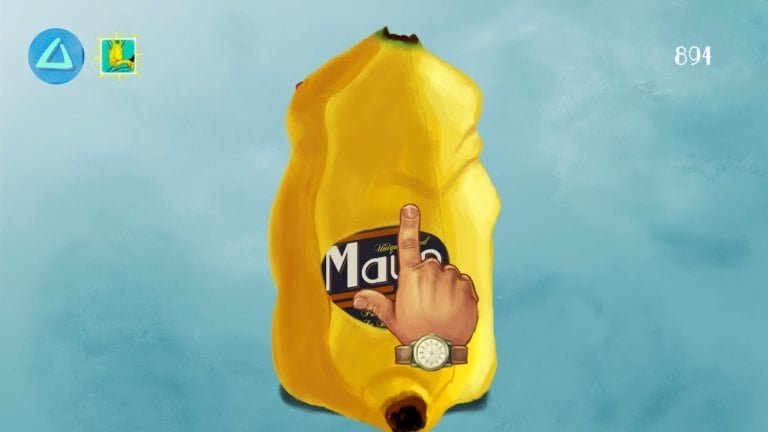 Before we jump to conclusions, let’s give this game the benefit of the doubt and look a bit further into it. Believe it or not but there is a story to this game. Scratch that – there are several stories, each as absurd as the game’s concept itself. As you click the jar, you unlock rewards in game that allow you to alter the appearance of your jar of pure fat. For example, your mayo can wear a bikini, or a potato sack. The background can also be altered (at a certain point it’s raining cats and dogs.) So as not to spoil any more, I’ll let you figure out the other options yourself. As you unlock these rewards you get a little piece of a sub-story to read, of which there are several. Each story revolves around this jar of mayonnaise and its past. Yes, it’s easy to just skip the story and keep mashing that x button, but if you slow down for a few seconds you may actually find yourself interested in… this jar of mayo.

There is a counter to see how many clicks you’ve obtained and, if you were efficient, you should have everything unlocked by the 10,000th click.

My Name is Mayo is a funny game, but I would be lying if I didn’t say that it was a rather dull and pointless one. However, I feel that may be part of the game’s brilliance. The fact that this game exists reminds me of the existence of another game that you may be familiar with, Desert Bus. If you haven’t heard of it, here’s AVGN’s hilarious review of it.

In the event that you can’t watch that review, or would rather avoid going down that rabbit hole, I will briefly mention that Desert Bus, like My Name is Mayo, is a pointless anti-game. Maybe it would make sense to consider them parodies of video games. I believe that Green Lava Studios meant for My Name is Mayo to pick on the fundamental ridiculousness of video games as a whole. Even as games get deeper and more involved as the years go on, you’re still playing a video game. Take the Uncharted series, you go through many adventures and grow to like and care for the characters… As you continue to murder thousands of people in epic gunfights without so much as an injury to yourself or a court trial post-game. Nobody bats an eye, our realism isn’t broken, and we aren’t demanding our money back. This is because it’s a video game and that’s just what you do in video games. I believe that one of the goals of My Name is Mayo is to scale back the way that we see modern video games to create something that, at the very core, is what a video game actually is.

Like I mentioned before, there are several subplots in the game for you to unlock, you occasionally have to press several buttons in a sequence to shake things up, and you can feel free to follow along with the story or not as you unlock trophies/achievements that at the end of the day mean just as much or as little as any other. Sounds like Grand Theft Auto 5 to me, but instead of tapping a button to shoot people, you’re tapping a button to poke a jar of mayonnaise. Yes, the degree of effort put into the games and the feeling of success or failure from your own ability to play are vastly different between the titles, but My Name is Mayo hits all the fundamentals of what a game is. Of course if the games cost exactly the same, you would certainly get more bang for your buck by buying GTA. 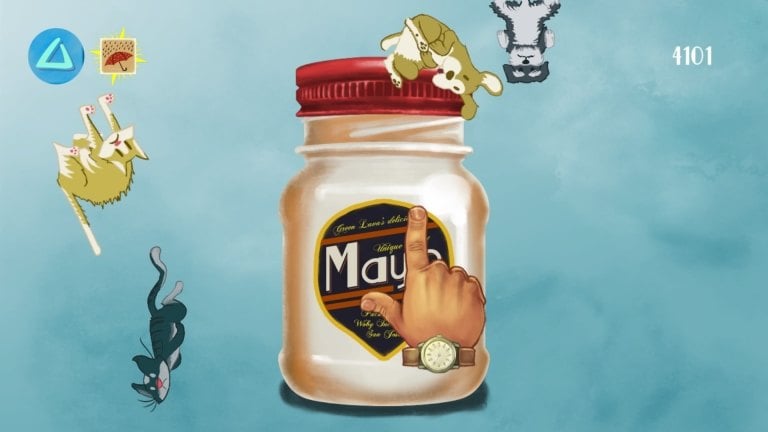 The subplots themselves parody other video game tropes, but to avoid spoiling I will also let you discover those on your own. Okay, I’ll give you one quote, “What do I know about love? I’m just a mayo.” Sound familiar?

I mentioned that I would talk about the trophy-whorishness for a bit so I’ll do that now. Most of the trophies/achievements will be unlocked relatively early in the game, but the last 2 trophies (1 achievement) requires 10,000 clicks, while all others should unlock well before that. Yet as of now, about 86% of people who own the game on a Sony console have the platinum trophy. That shows that people continue clicking long after all the others are unlocked for just for that last platinum trophy which is worth more points than thousands of much harder to obtain bronze, silver, or gold ones. As a compulsive trophy hunter myself (this isn’t an exaggeration) even I realize that in the end they mean nothing to anybody but myself. However, in most games I find myself and others go far out of our ways to unlock the last few trophies, even after everything else is over. That’s what My Name is Mayo also forces you to do, but to a lesser extent. Instead of going on a several hour long and daunting task of collecting all the feathers in Assassins Creed II after everything else has been completed to get the last two trophies, My Name is Mayo has you click for an extra few minutes. In the end though, the result is the same.

The last thing that I would like to talk about is what I believe the impact will be of My Name is Mayo actually having a platinum trophy on the PSN store. Again, for $0.99 you can either get 51 or 102 trophies depending on if you have a PS4, Vita, or both. I believe that this has the potential to have a snowball effect that throws off the PSN trophy “ecosystem” if there is such a thing. Unfortunately, I am not entirely familiar with the achievement system on Steam so I can’t comment on if this will have the same effect or not. However, on Sony systems, there are a ton of great indie (and AAA games for that matter) that simply don’t have platinum trophies that hunters seek out so much. 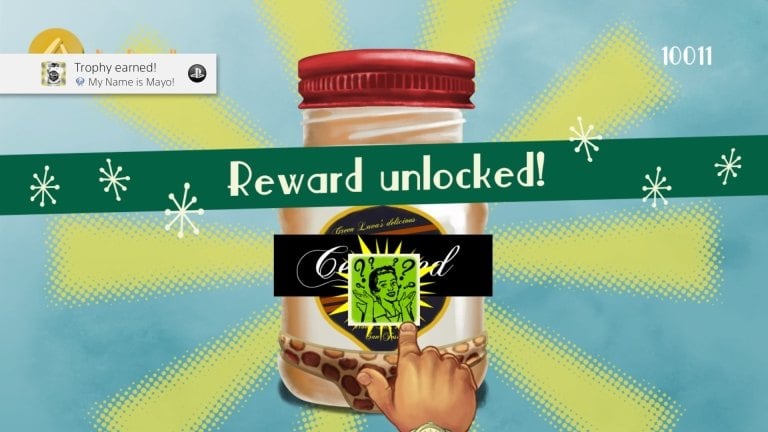 In what world does it make sense that for one purchase My Name is Mayo has a total of 102 trophies (8 gold and 2 platinum) while Grand Theft Auto V has 70 (2 gold and 1 platinum) and Resident Evil 4 HD has 12 (1 gold and no platinum)? There are indie developers and even AAA developers that make very great games and actually ask Sony to allow them to have platinum trophies before being denied. Yet, My Name is Mayo was somehow able to slip through the cracks. Could it be that Sony saw the work of art and hidden narrative in this game that I discussed in my review and as a result were happy to give it a platinum trophy? Or is it the more likely case that the systems and regulations in place that Sony use to determine what games get platinum trophies are flawed? I’m willing to bet on the latter. After all, this game is far easier and faster than even the infamous Hannah Montana game for the PS3. My Name is Mayo may have set a precedent that most games going forward will have platinum trophies. If that’s not the case then they’ll be hearing a lot of flak from denied developers about how My Name is Mayo was able to get one.

There’s a lot to talk about regarding this game, so I’m going to leave the rest up to discussion in the comments.