With every new piece of technology from TVs to watches to fridges and now glasses boasting the “smart” tag, one can get understandably skeptic as to what can be defined as “smart” and what those devices actually deliver. So, just how smart are the Mutrics smart audio sunglasses?

Nested in a futuristic pyramidal-shaped box is a pair of thick-rimmed glasses with a matte black finish (there are also white and orange variants). Sure, they do look like a regular pair of glasses, albeit with thick temples. But if you flip them over, you will discover that actually these aren’t your regular pair of frames. Enter the Mutrics smart audio sunglasses: 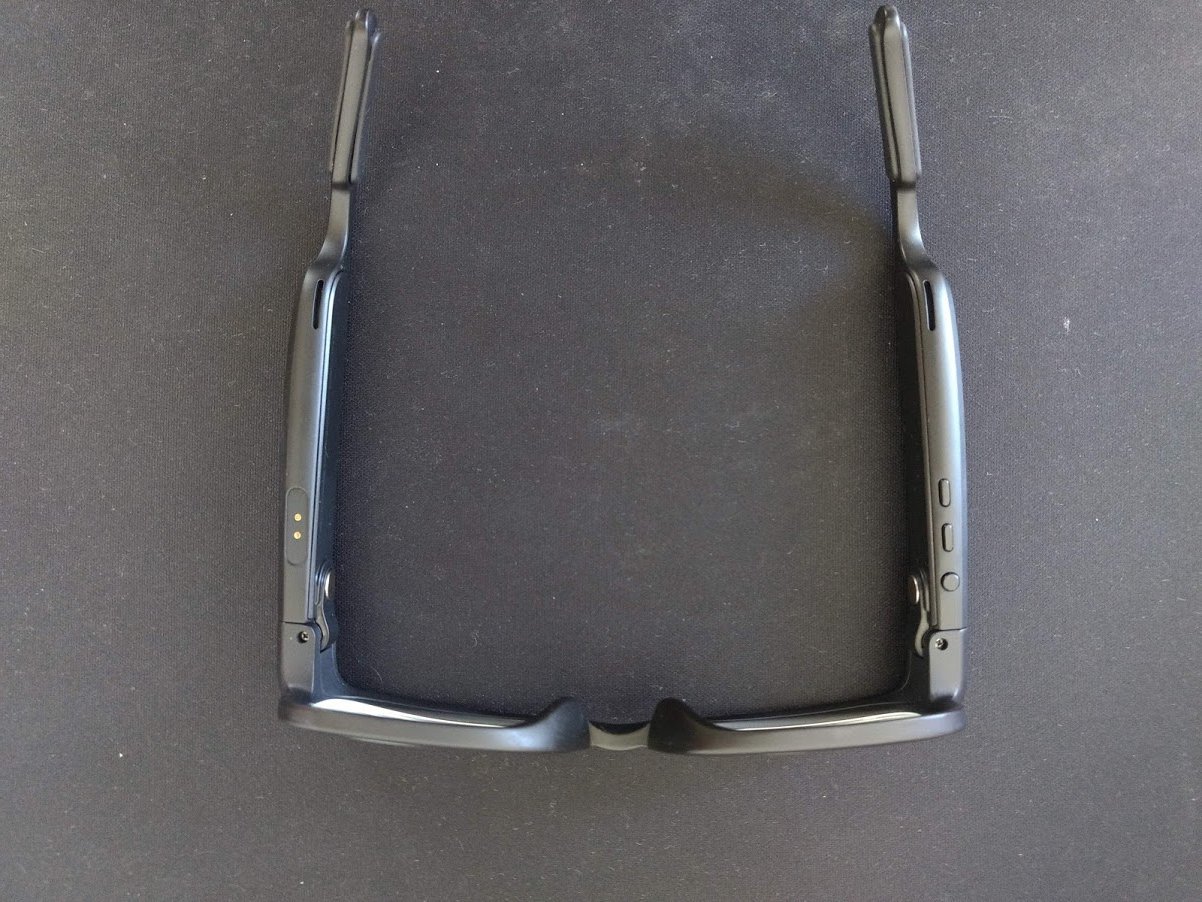 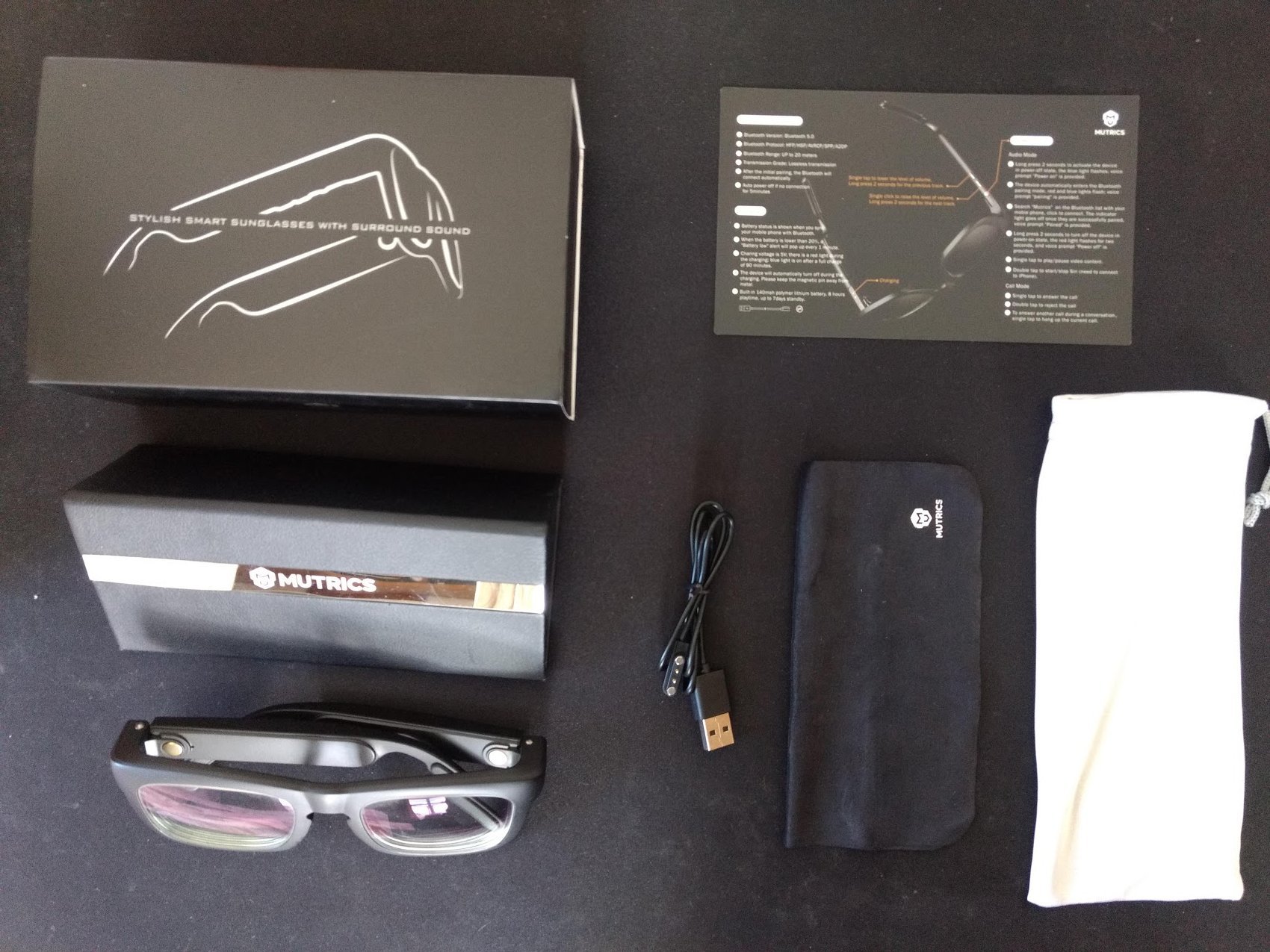 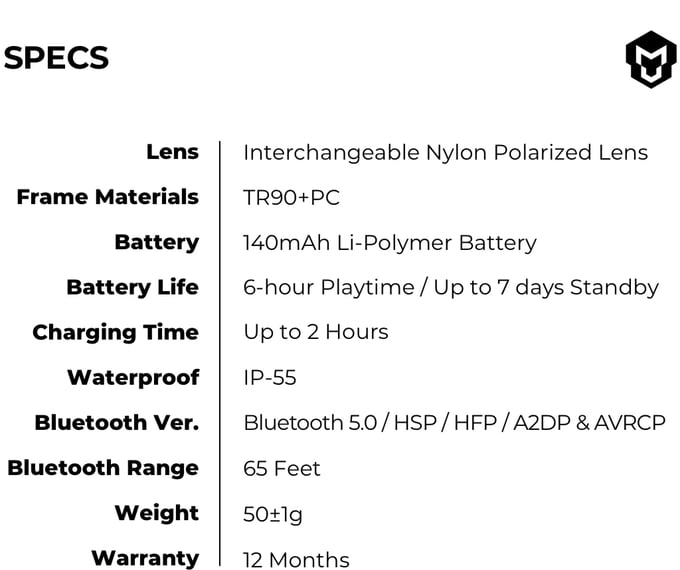 Through the looking glass

On the left stem of the temples are two connectors for its magnetic charger which lights up an indicator light on the right temple when connected. Personally, I would rather that it packed a universal port like a USB-C or even a micro-USB because if you lose or break those cool little Mutrics-only chargers, they can be hard to find. 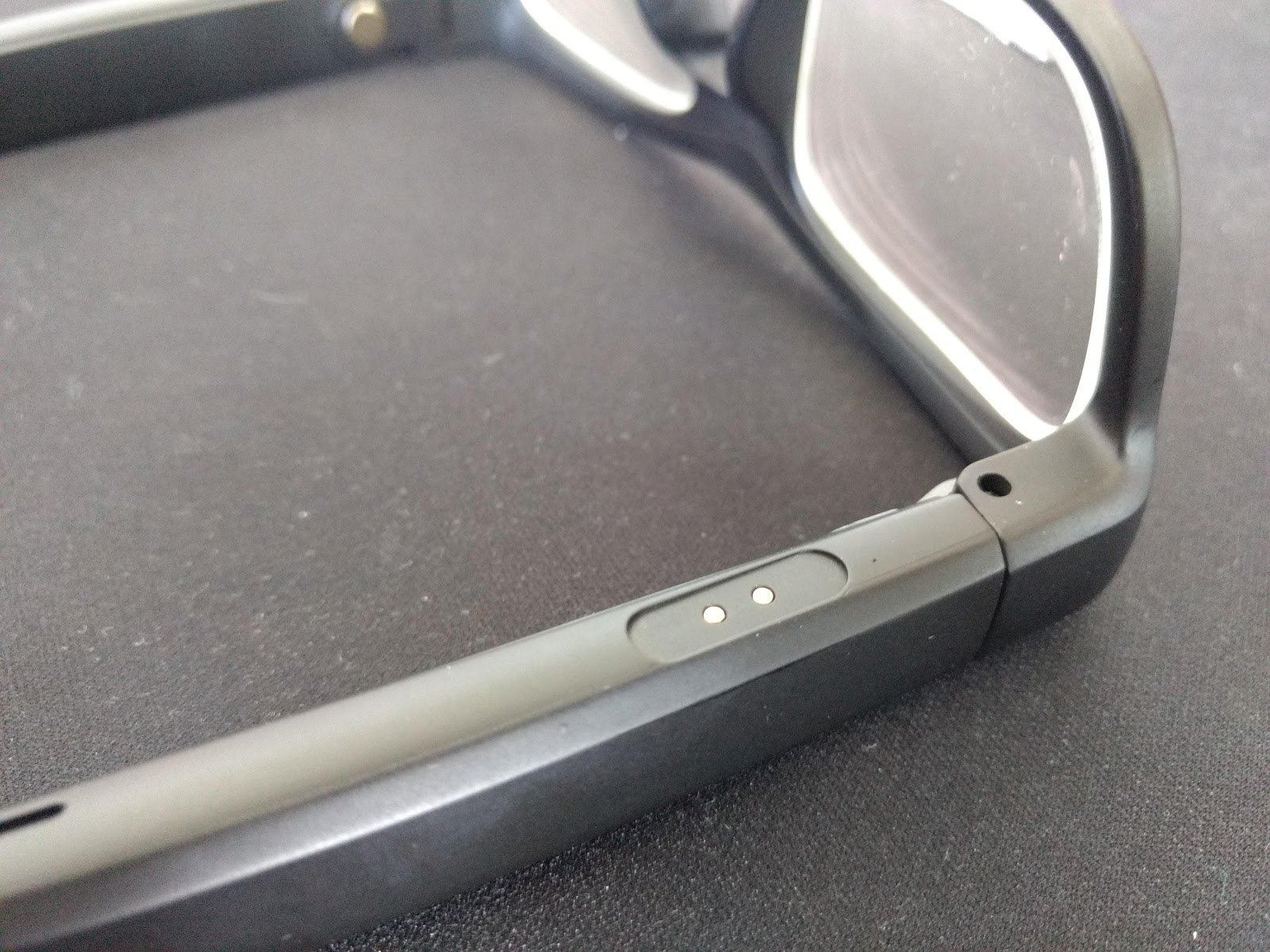 The right stem features 3 buttons with the first one powering the device on/off and also functions to answer/reject calls, play/pause music and fire your voice assistant (Google Assistant/Siri). The other two buttons function to raise/lower the volume and also to shuffle forward/backward between your playlist. 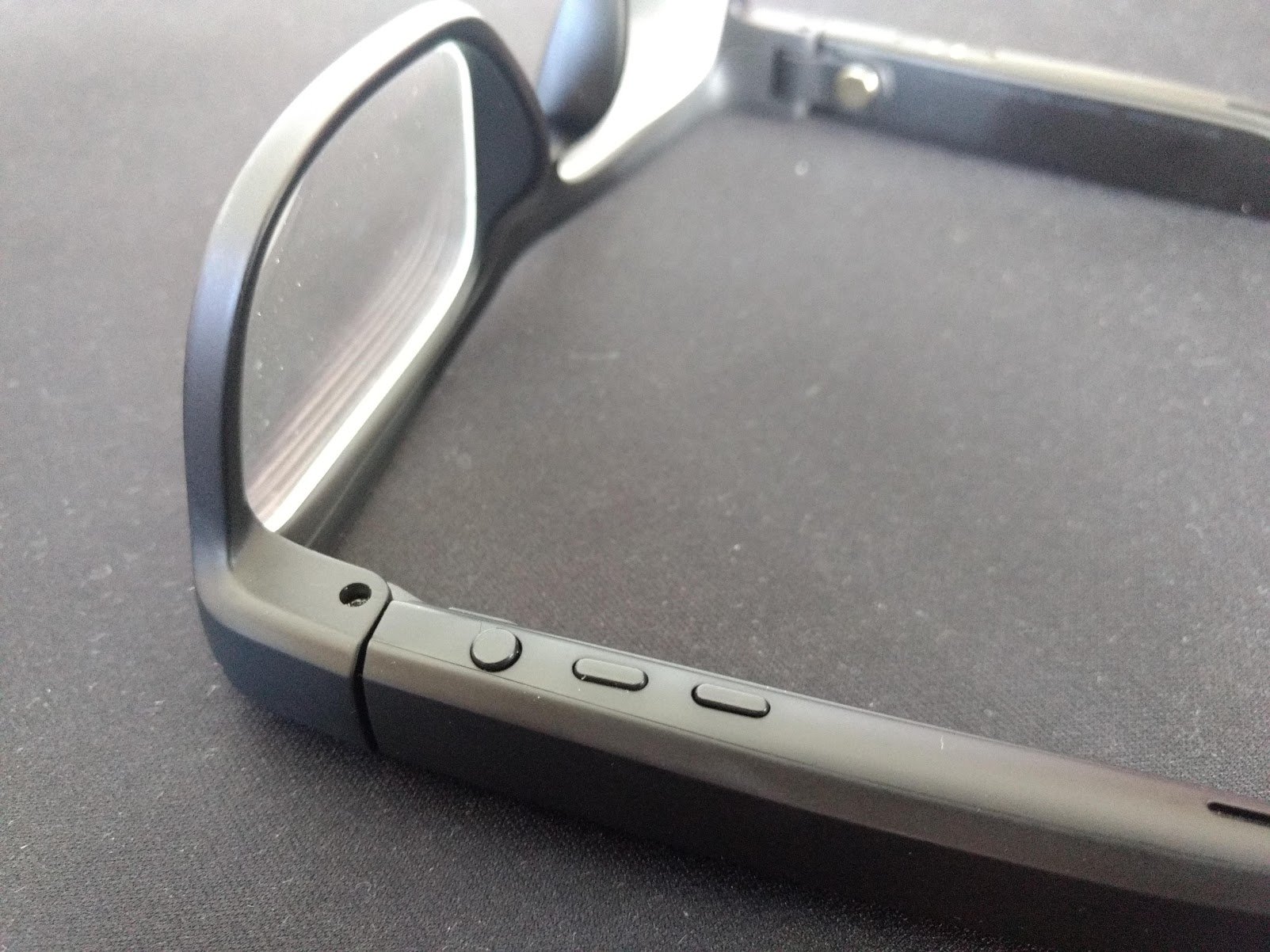 Upon closer look, you’ll notice two slits near the back of each temple. These house the main component of the Murtics which the company describes as “Virtual 5.1 Channel Surround Sounds System”. What this means is that these are tiny speakers which sit atop the back of your ear when worn and will do, well, whatever speakers do. These are not bone conducting pieces but rather really tiny speakers, whatever naming convention the company is trying to apply to them.

If that sounds less glamorous than you thought it would and more like an elaborate way to conceal speakers, you shouldn’t dismiss the Mutrics just yet.

Pairing it over Bluetooth (the device packs a Qualcomm 5.0 Bluetooth chip) to your smartphone is done in a matter of seconds with a stable connection. Once done, you can enjoy anything audio-related with these. Sure they aren’t as good as your favorite over-the-ear headphones but considering the size of the Mutrics speakers, they do offer decent sound quality. The same goes for the microphone. The overall experience is, dare I say, comparable to in-ear pieces like the HyperX Cloud Earbuds.

At the end of the day, your experience of the Mutrics will eventually depend on the ambient sound. One of the perks of this device is that it allows you to be aware of the surroundings while also listening to audio as your auditory meatus is kept clear. But in a noisy environment like on the metro or train, you cannot really hear the audio output from the Mutrics as it is overcome by the surrounding noise/sound. Given the close proximity of the microphones to the control buttons, I’ve had complaints from the other end of my calls about hearing every scratch or button press from my side. I’ve also noticed that I’ve had to speak louder than usual in order to be heard when using the glasses outside (when indoors, I can speak at my normal tone just fine).

While these aspects definitely need to be taken into consideration while in use and take some getting used to, the Mutrics nevertheless provide a surreal experience. It’s not everyday that you can small talk with the cashier all while listening to your commute playlist or to the latest episode of your favorite podcast. It’s even less common to speak to someone else without any visible microphone piece and hearing back as if through regular earpieces, just... without anything in your ears ! I really wonder what passersby were thinking of me while seemingly speaking to myself...

I’ve gotten used to firing up my Google Assistant in the morning with two clicks on the right temple and hear the weather forecast, my schedule and the news headlines while I prepare my morning coffee and get ready for the day. Afterwards, with two additional clicks, I call up my Google Assistant to open up Spotify and play some music or make a call. For a hands-free experience, the Mutrics really delivers.

With its 140 mAh built-in battery boasting an 8-hour playtime capability and up to 7 days on standby, I often use the Mutrics and forget about the need to charge them (while switching it off when not needed). By the day's end, I even have enough juice left to pop them on and go out for a run without fearing to damage the electronics thanks to it being IP-55 waterproof (sweat resistant).

Moreover, even when the volume is at a comfortable level, people walking by or sitting next to you won’t hear what you do, unless if you crank the volume all the way up and are in a really quiet place.

Of course, these experiences extend to gaming as well! 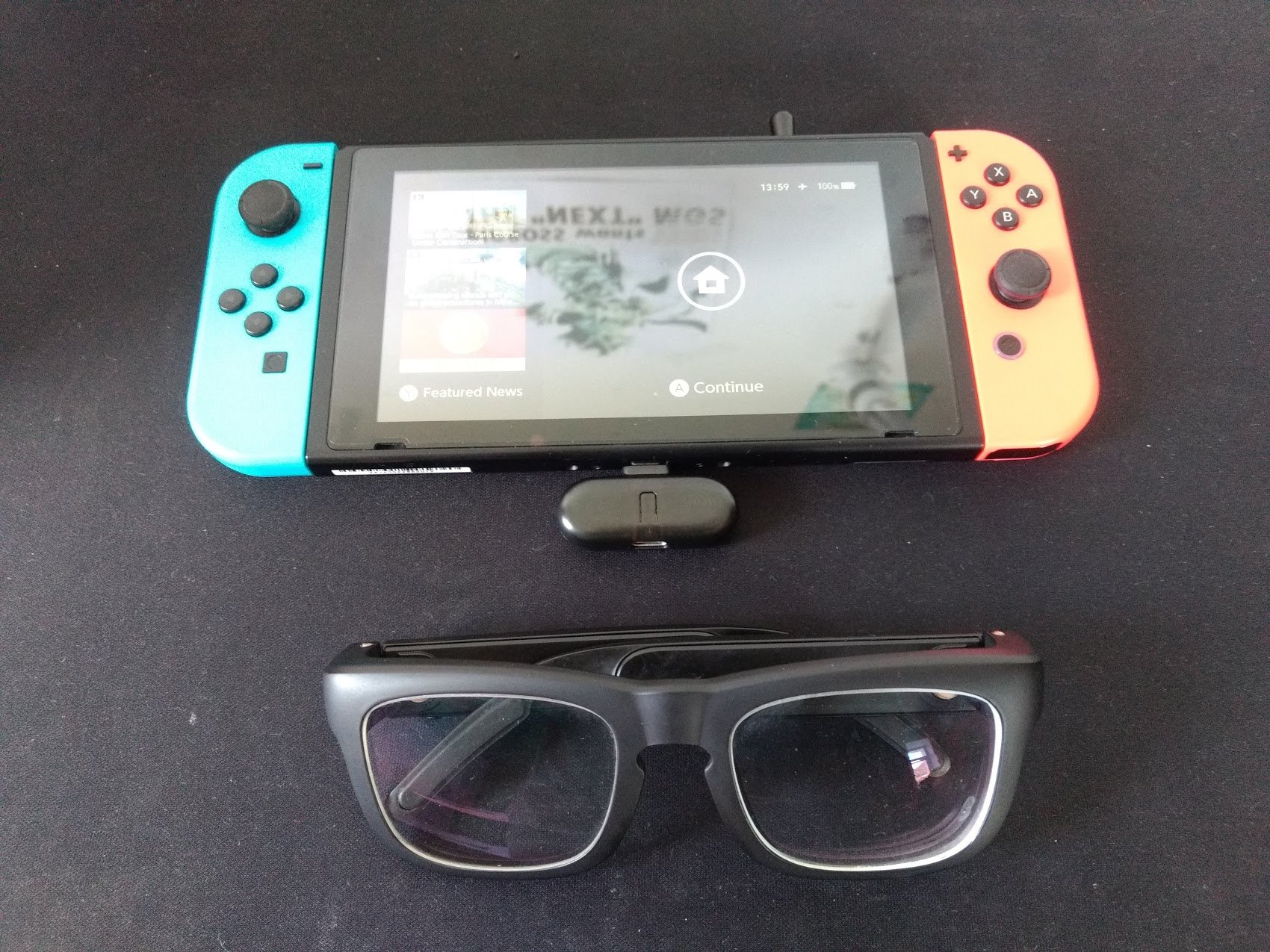 You’d rather use the Mutrics for on-the-go gaming for its ease to carry than for your console/PC for which you probably have better (and bulkier) headsets. Pairing the Mutrics with the GuliKit Route+ Pro and Nintendo Switch in handheld mode combo (pictured above) really makes for a great experience for short bouts of gameplay. I've used this setup during my commute or during breaks and cannot recommend it enough to bespectacled handheld gamers. Those smartglasses are also a great fit for smartphone gaming and with this combo I've played hours of retro emulators and Telltale's The Walking Dead. No need to carry extra earphones, the Mutrics will do just fine for gaming in such instances. Of course, don't count on them for competitive gaming, for which you would again prefer full-fledged headsets.

If you wear glasses and are eyeing the Mutrics, I would highly recommend you to fit them with your prescription lenses to get the most out of it. However, they come in only one size and shape which might not be to everybody's taste.

If you’ve been keeping up with the tech news last week, you might have come across Amazon’s Echo Frames which look uncannily like the Mutrics, features and all (minus touch controls like in the Echo Frames). However, the Mutrics was released way before Amazon’s take on smartglasses was even announced and they are also cheaper ($129 vs $180), and is already on the market. On the downside is the plastic-y build quality of the Mutrics which feels quite cheap and seems prone to breaking if they fall (not tested).

One feature that I feel lacking with the Mutrics is a smartphone companion app. This could boost the potential of this device by allowing the user to assign functions to certain configuration of button presses so as to fire up a specific app, reply to messages with a pre-written text, and the likes. Another downside is the inability to know the amount of battery life left, which could have been displayed on the app or even have the device read it out when powering it on.

Also lacking is the ability of the Mutrics to inform the wearer of incoming notification. While smartglasses are increasingly leaning towards not showing a full-fledged screen in front of your eyes, they do have ways to let users know of new notifications like Focals' non-obtrusive AR-style retinal projection solution. The Mutrics could have employed another technique like flashing the indicator light or even sounding a distinctive beep. With the aid of a companion app, these could be customized to the wearer's liking. But alas, Mutrics adopters will have to resort to physically checking their phone for new notifications. 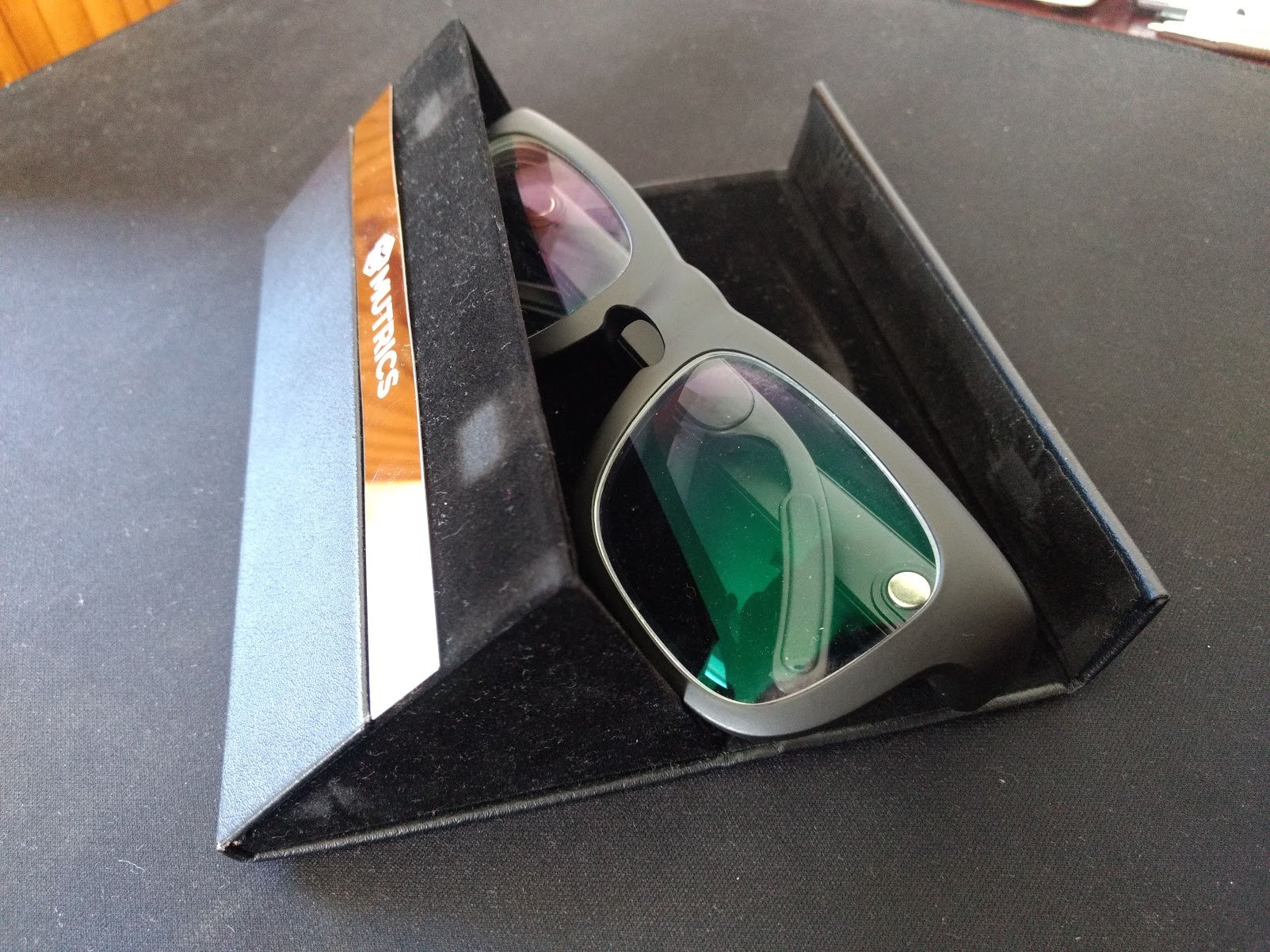 Mutrics’s take on smartglasses is a relatively simplistic one that surprised me despite being rather barebones. It even got me to say “I’ve got to charge my glasses”, something I never thought I would be saying, at least any time soon. Sure, it has room for improvement on both hardware and software side but the company is off to a good start and I hope they only make the next iteration better. 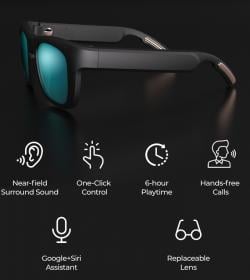