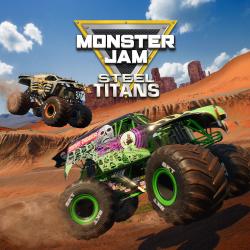 Huge fan of Excite Truck, want a Cyber Truck to review please... this should satiate my need for Trucks...hopefully.
Monster trucks might be great in the real world but generally speaking the games aiming to bring that experience to your living room fall flat. Can Steel Titans deliver what these trucks so sorely deserve?

Monster Truck Rally, Super Off-Road, Excite Truck: all superb examples of games that gripped it and ripped it on the subject of Monster Truckery, bringing explosive fun and games to even early 8 and 16-bit  generations of consoles throughout my childhood. Excite Truck, in particular, brilliantly landed during the launch of the Nintendo Wii, dropping in as an out-of-nowhere smash-hit that deviated to races over spectacle focused events. Nobody can discount the fact that it was astoundingly playable, smooth, and just plain fun! Steel Titans is the latest in the Monster Jam series, with its precursors including Crush It! on PS4, 4x4 World Circuit on Wii, and Maximum Destruction on Gameboy Advance and PS2. The titular big-wheeled series has spanned nearly two decades with generally average-at-best review scores throughout that period. 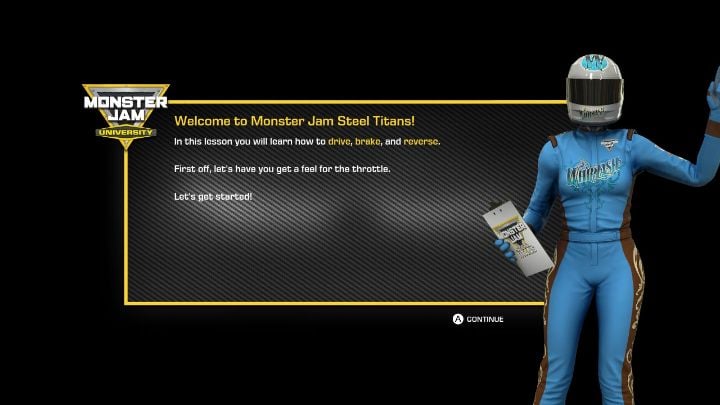 Steel Titans brings 25 of the most famous trucks to Nintendo Switch through events like racing, head2head, waypoint, timed destruction, skill/freestyle challenges and more across 12 stadiums and a massive open world to explore. Firing up the game you get an immediate sense of over-sized fun and the raw power of these beastly vehicles, but you also witness glitchy shameful graphics that really could have been done a lot better given the Switch is at least a relatively powerful platform. While it attempts to squeeze everything it can into the hybrid portable console, it's clearly not from the same school of skills as any first-party title on the console, and it plainly just looks terrible. Draw-distance is shorter than an N64 game, level of detail model pop-in is truly horrific, the controls are iffy, and any included effects are basic at best with a little motion blur to the periphery and a shoddy two-second 'mud-kicking-up' animation on the tires repeating ad-infinitum along with the annoyingly looping engine sounds. This title could have benefited from a second or third pass on the graphics front, more upbeat adaptive soundtracks, more interesting and diverse sound and graphical effects; heck an announcer would have ramped it up a notch, berating your current condition and hyping up the action a little. It would have been a superb addition in my opinion. 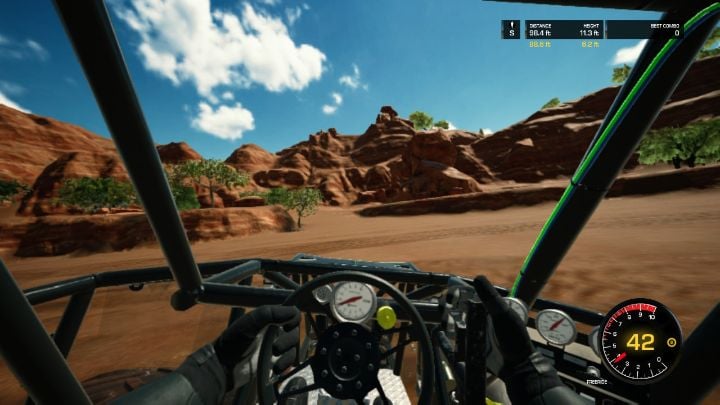 The included events mainly involve driving in a circle, driving in a bumpy circle, and driving around a bumpy squiggly track. The highlight of this package is the waypoint event, where you race point to point against AI who will not adapt their paths and will adhere to their racing lines. Where roads curve, you can cut corners for the fastest route; the AI won't. They continue along in an orderly queue, moving like a lifeless, joyless, non-competitive convoy from one flag to the next. Acceleration, top speed, bounce, traction, and stability are all adjustable thanks to upgrades made available by completing events, though I never felt compelled to want to finish the series of events, I just endured them to see what was next in the vague hopes that something interesting would come about. Earning points unlocks new trucks, new trucks unlock new upgrades to buy, and new upgrades mean it's slightly easier to win at holding down the throttle throughout, but there was no customization so to speak. Nothing that makes this title special to us on an individual level. Freestyle events involve performing tricks in a stadium setting and chaining those tricks together into a combination of moves that rack up score multipliers. The main issue with this mode is that there are perhaps a handful of things you can do with your vehicle, as well as a two-wheeled spin to self-right yourself should you land on your side. It seems too random, too hit-and-hope that you will do something that resembles a purposeful combination and not just a spamming of the buttons to try make something out of nothing. Sure you can back-flip off a shipping container, and you can corkscrew off a mogul, but there are no moves to chain them together, no popping two wheels and balancing it out, no nothing other than the spin like crazy and hope you land on your side or wheels else you'll have to hold A for what feels like 30 seconds to reset your self and start it all over again. Perhaps it's trying to be super realistic, perhaps it's just trying to be grounded, but and effort to have fun in this game seems to get snubbed immediately, out one way or another; even the "mini-game" of fixing the bolts on your wheels if you snap them in half is just a quick time event of hammering B. 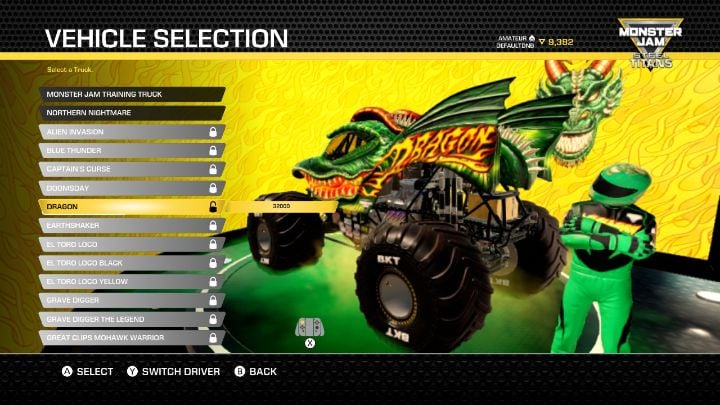 The most fun I had with this game was exploring and collecting the tokens in the open-world hub segment. Moreover, I was probably just attempting to escape the sandbox and find something interesting to drive around in, which I ironically couldn't do due to the one aptly oversized mechanic which kept stopping my progress; if you go out of bounds you get exploded back into the center of the hub map. This was the most exciting effect I found in this game, and all it does is prevent you from having fun. Exploration with a monster truck should surely include insane off-roading, driving up sheer mountains to see if you can without flipping it, and jumping stuff to find hidden areas; alas Monster Jam Steel Titans constrains you to its lacklustre world of boring blandness and frustrating gameplay. If I were a race commentator for this game I think I would stay silent throughout its entirety too, as there is nothing exciting to look at or comment on. My advice is to avoid this game unless you're a die-hard truck fan.