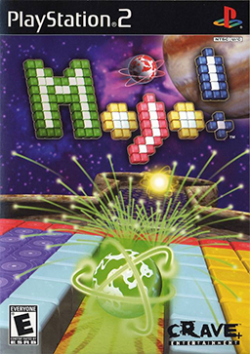 Mojo is not one of those games that I would have gone and said "I want this." But it seemed a bit intriguing, so when I saw it at a local game shop for about $1 complete, I said, "why not, seems like it'd be fun." But I don't think I was prepared for what I was getting into.

The concept of Mojo is fairly simple: Clear every block on the board to move to the next stage. In order to do this, you roll a ball on the stage, and hitting a block clears it. Where the game changes things up a bit is in how you clear said blocks. The blocks are different colors, and you can only clear blocks that also match your ball's color. Changing your ball's color involves going through "infusers". Additionally, some blocks have certain attributes, such as some blocks being made out of ice, in which you have to hit them a few times before they break. However, right off the bat, one of this game's biggest flaws comes into play: the controls. The ball is made out of some metal based material, and as a result it "feels" heavy when you control it. It's... quite awkward. Changing your direction requires quite a lot of room, and the heaviness of the ball means that it's very hard to control it on slopes. It doesn't help that a lot of the levels lack walls, which means you'll be falling off the level quite often. The back of the box says that the game is for "only the most skilled players", but I highly doubt that even they would be able to handle how difficult it is to play. The game itself is fairly long if the box and manual is to be believed, but I cannot imagine how much of a chore it would be to go through it all. Every single level in the game is the exact same concept, with the only real differences being in the terrain and powerups. Another set back that may not bug you but it certainly bugged me: this game is UGLY, especially in 2021. The game's graphics and sounds have aged horribly, using generic fonts you'd find in Windows 98, boring textures, simple sound effects and somewhat repetitive music. This game looks as if someone who was getting into game design made it using nothing but the stuff they had on hand. And it even shows outside of the game; the game itself is only about 50MB large, making it one of the smallest games (in terms of filesize) on the PlayStation 2. They could have used the extra space left on the CD to put better textures, music, etc. but they didn't. The game has a multiplayer mode and a stage builder as well, but I'm pretty sure anyone would've had enough of this game just after the first few levels. Had this concept not been delegated to a bargain bin title, it could have had potential for something interesting; instead, we get this, a lousy, slapped together puzzle game that lacks any style whatsoever and is unpleasant to play. I'll most likely be delegating this title to a test disc if I ever need to test PS2 hardware in the future, as I don't ever see myself playing through it at all. It's also on the Xbox as well, but I doubt it's any better on there.
Verdict
alexander1970 and HylianBran like this.
Like this review