Ministry of Broadcast is one of the latest indie titles to launch on the Nintendo Switch, after being previously released for PCs. Featuring loads of puzzles and platforming sequences and the mandatory hi-bit graphics, will it satisfy your indie gaming needs?

It is somewhat surreal to witness governments around the world resorting to surveillance as a means to track down the ongoing pandemic. This is especially the case if you’ve consumed media fantasizing about a dystopian future where such tracking methods are part of the norm. Add to the mix a wall dividing a country, and you have the setting of Ministry of Broadcast, yet another game leaning on a narrative as prophesied by George Orwell.

However, the twist to this indie title’s narrative is that citizens of this walled-off country are under surveillance as part of a... reality show. This Regime-organized show provides competitors with the opportunity to cross the wall and reach freedom on the other side. As absurd as it sounds, this show is the reality of this game’s cast who take roles ranging from protestors to guards who often take their roles too seriously (Stanford prison experiment much?). 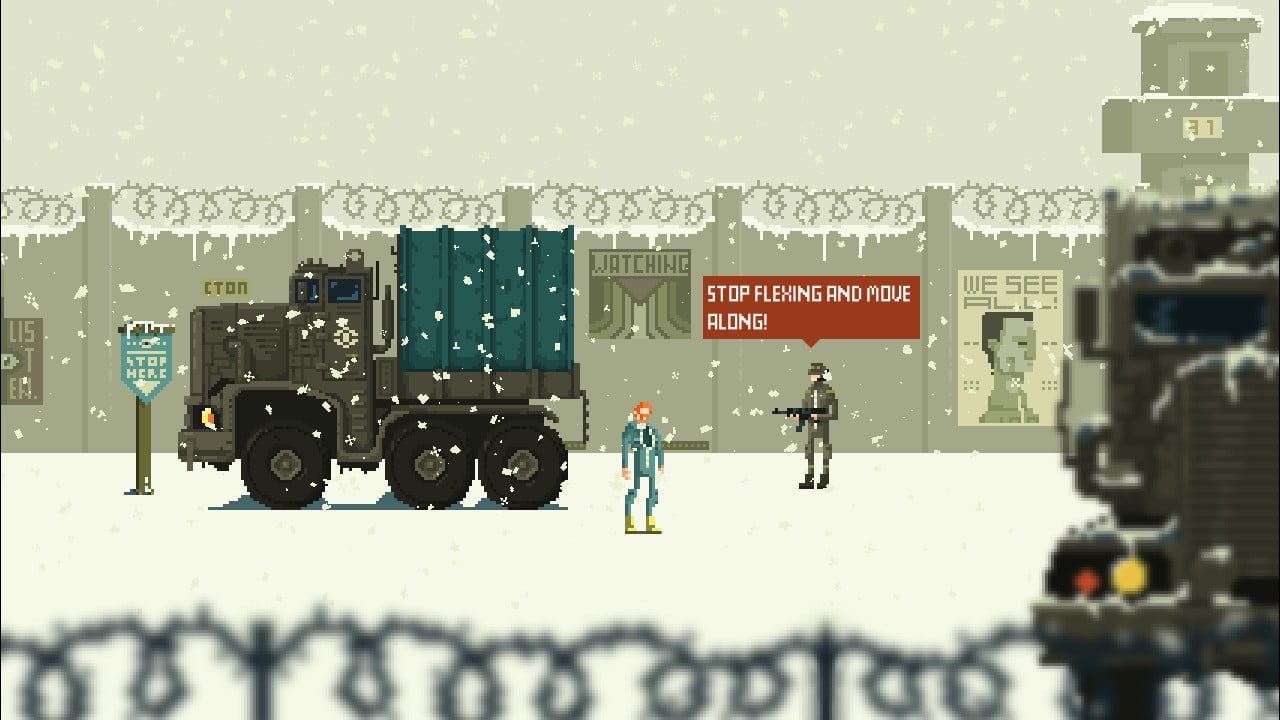 You will have to guide our unnamed ginger-haired protagonist who joins “The Wall Show” as a contestant with the aim to win a pass allowing him to reach his family beyond The Wall. In the span of 5 in-game days, you will have to help our shoeless protagonist tackle the challenges in arenas, essentially levels, made up of platforming sessions, puzzles, angry guards and mean dogs.

Even if 5 days sounds rather short, the puzzles/platform sequences can prove tenacious, if not annoying, and will add to the length required to beat the game. This is because most puzzles require trial and error to figure out. And once you’ve tried and errored, you will notice that every puzzle requires a certain sequence in order to complete it; press switch, elevator with dog ascends, dog chases after random person who falls flat on the slippery platform below, allowing you to proceed (don’t worry, the NPC apparently has padded clothes to play the part). 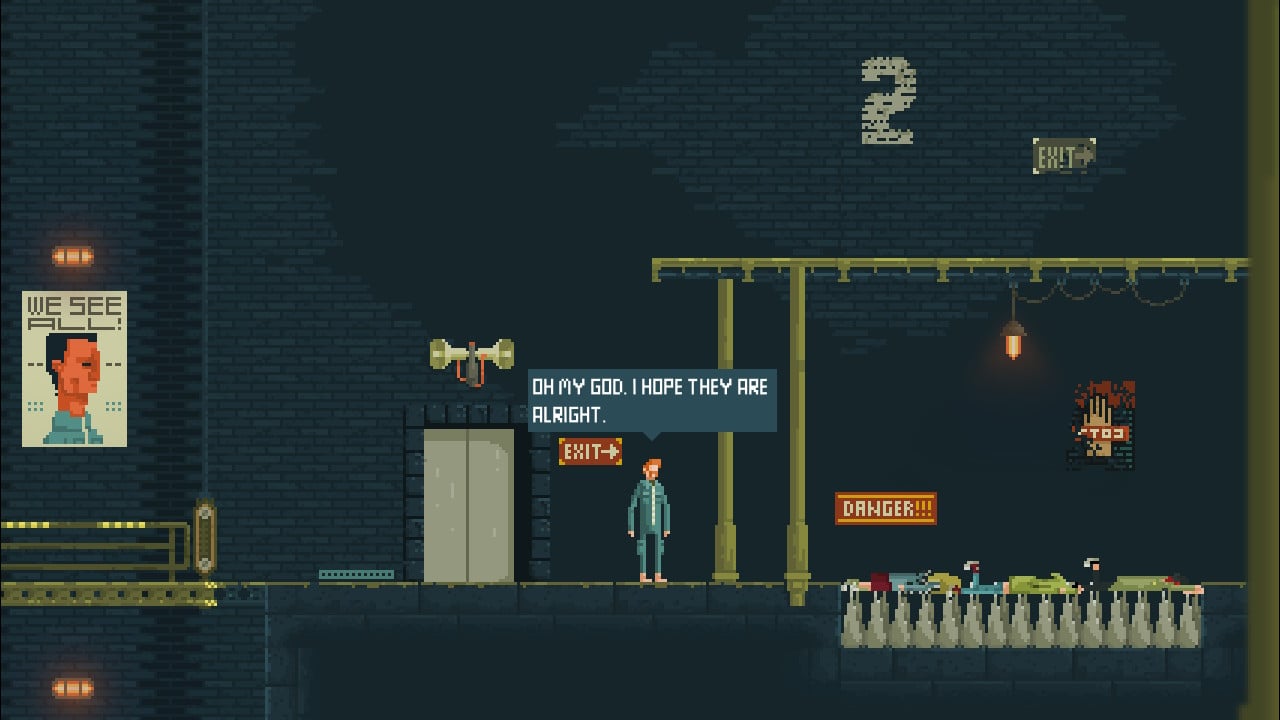 Even if the sequence is (darkly) humorous in itself, hitting the right action does get tedious because it will require lots of repetitions before you succeed, especially in later levels. For example, before reaching the area with the NPC’s body, the mean dog might chase you to death before that. You’ll have to expertly time your actions to succeed, often ad nauseum.

Moreover, most of the platforming puzzles will involve the same mechanic and even the same assets such as mean dogs, NPC’s body, distracting guards and walking on fragile planks, that often got me wondering if I’m playing the same level, only subtly disguised in another environment. Sure there are several silly quests like going the extra mile to shower to wash off the stink so that a fellow contestant can finally follow you and help you progress. These bring some originality to the title, and a humor reminiscent of Monkey Island. But these still involve puzzles that feel overly familiar and given that puzzle-solving is the core mechanic in Ministry of Broadcast, this gets somewhat redundant across the levels. 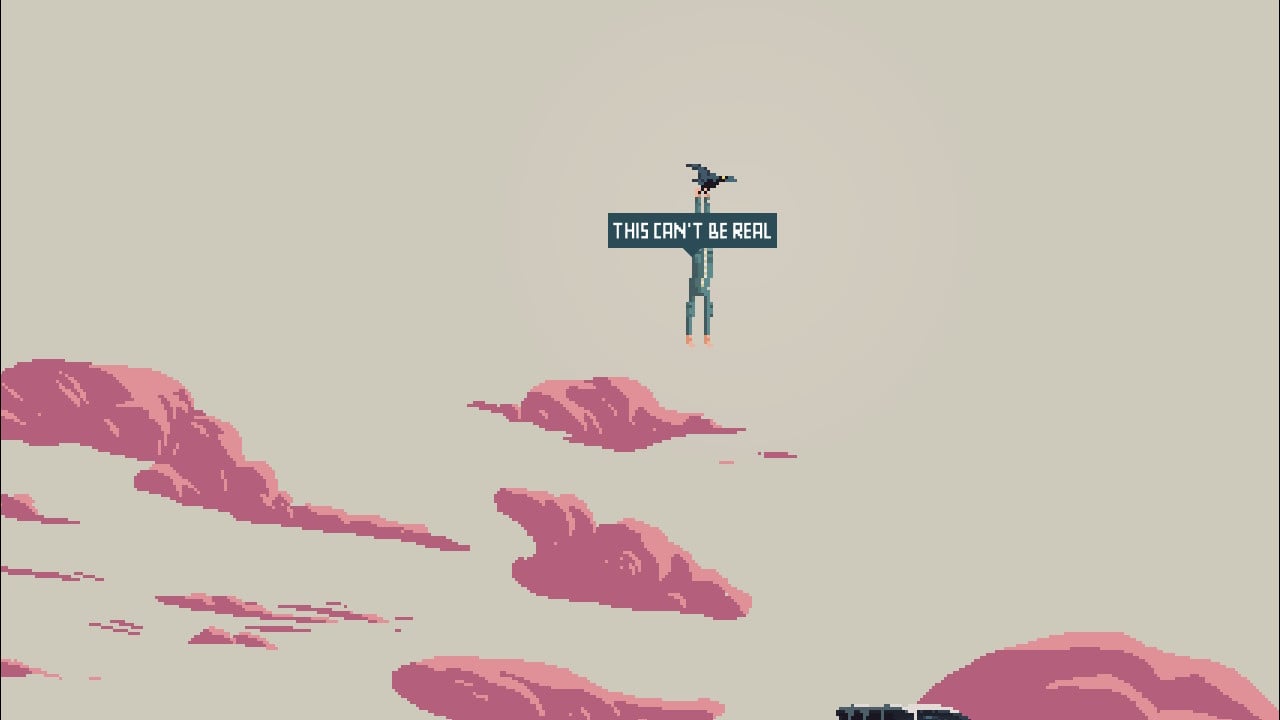 Somewhat redeeming is the presentation of the game. As a core development team of four, the attention to details paid when crafting the game is impressive. It soaks the user into the general dystopian atmosphere of the game, despite its pixelated graphics. Propaganda messages are plastered all over the place, the pause menu reflects that of a broadcast, your footsteps leave a tail in the snow and our unnamed protagonist will change expressions if he hits his head on an overhead air vent. These are definitely not ground-breaking but a plus on the presentation. And as the saying goes, the devil lies in the details.

As the game takes place in a reality show, its self-aware quips fit well in the game universe. Our orange-haired protagonist breaks the fourth wall by complaining about not being able to discern an NPC’s reaction due to his pixelated appearance. Another NPC will talk about immersiveness. At another point, the nameless hero makes note that the area he is in would signal a boss fight. Again, not ground-breaking but fitting and refreshing, especially after those repetitive platforming sessions. 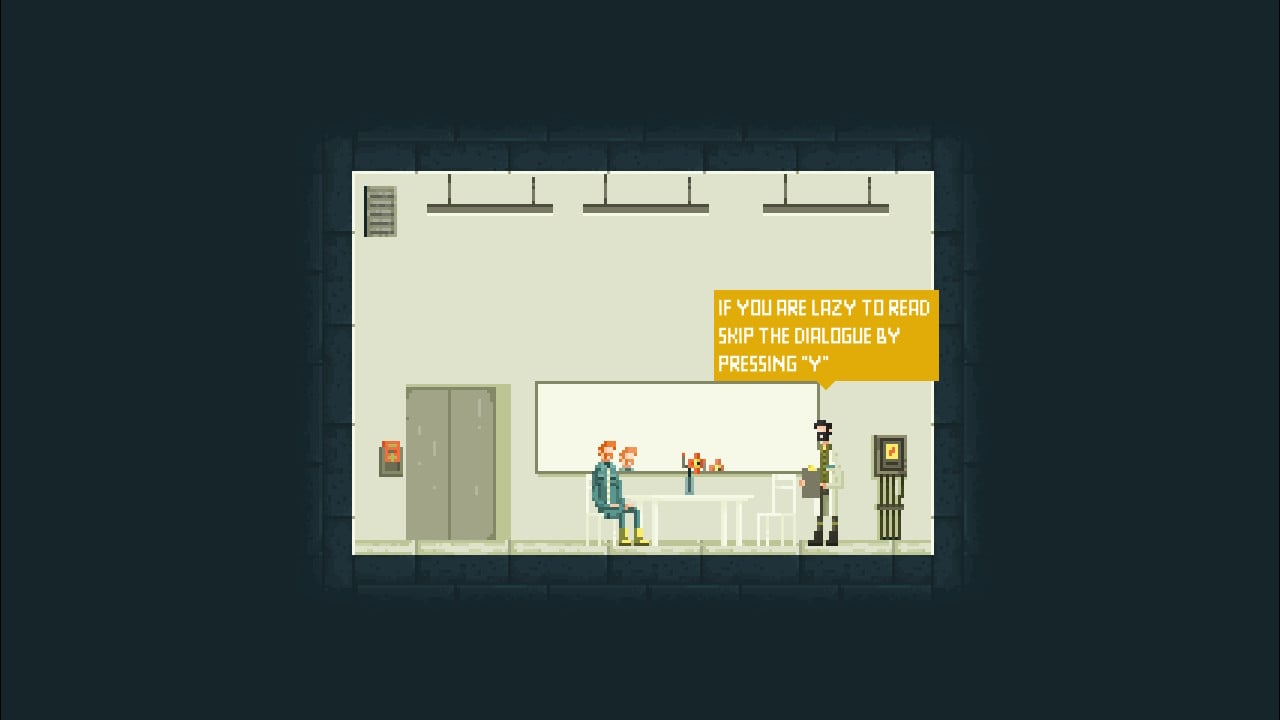 Ministry of Broadcast, intentionally or not, tries to convey similar vibes of movies like The Cabin In The Woods or The Truman Show and games like Monkey Island but the plot execution is a bit sloppy. It touches on heavy themes like oppression, trust and family bonds but not cohesive in a satisfactory way. As you progress, the game tries to fill in the gaps in the plot that it raises from the beginning but they feel underwhelming overall. There’s a talking crow for some reason right from the beginning that tries to emulate the protagonist's dark thoughts (I suppose) and recount the history of this country but its presence wouldn’t be missed. And also the fact that it talks while the world is devoid of other fantasy elements isn’t really explained nor does it fit in the context. Like this, other questions remain unanswered even after the credits roll.

However, some changes are on the horizon. The developers do plan to bring a “Story Mode” to the Switch version of the game, which will focus on the narrative and “relax some of the most stringent aspects of the game so you can enjoy a stress-free experience”. There will also be new animations and refined controls. Maybe these will make for a more compelling buy but this update will only be available in some weeks. In its current state, Ministry of Broadcast's fun element resides mostly in its presentation and less in its gameplay, an aspect that should be addresses with more variety in tackling puzzles which would themselves improve by not requiring specific sequences to be expertly followed. 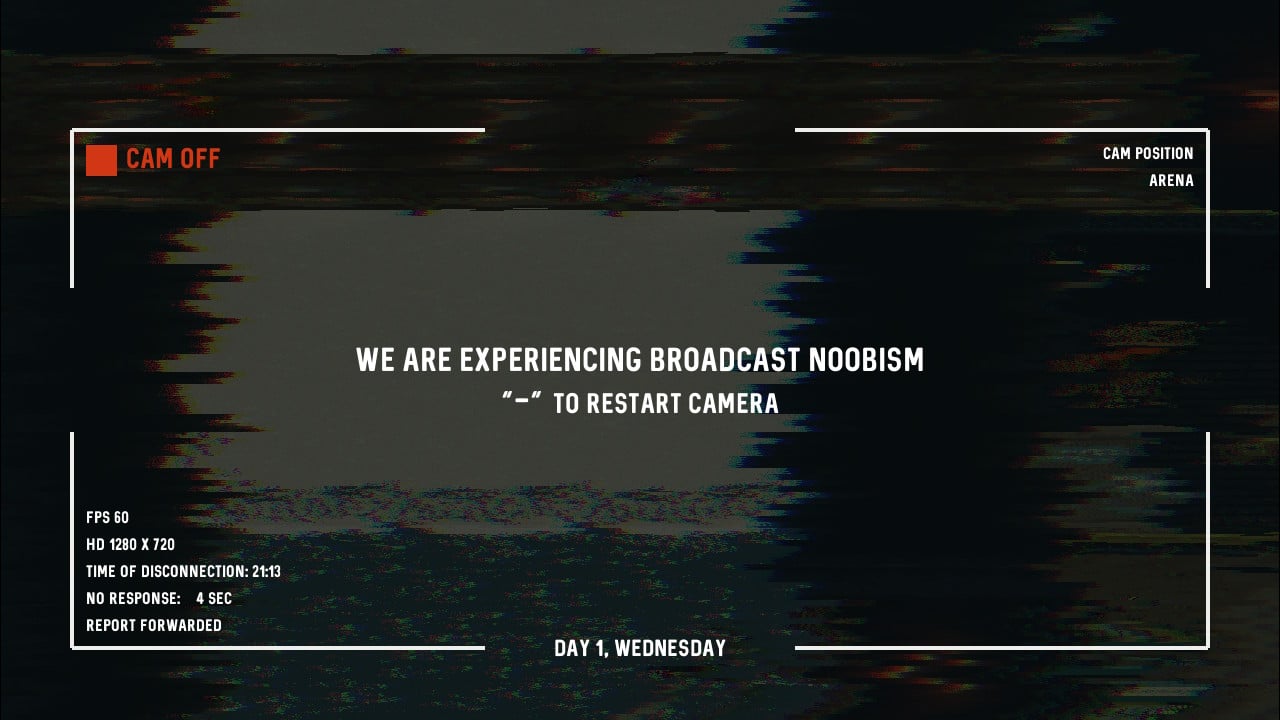