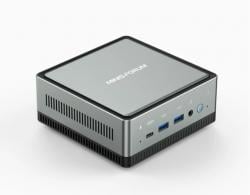 Sometimes big things come in small packages, and compact PCs are no exception. Today, we will be taking a look at the MINISFORUM U820, the newest mini-PC from the Chinese-based company MINISFORUM. Boosting an Intel i5 processor, does this small PC hide a lot of power? Let’s find out!

Compact PCs are becoming increasingly common these days, as they take up far less real estate than typical PC builds and pair particularly well with office monitors, taking up even less space than a laptop. As its name implies, MINISFORUM is a company that capitalizes on the compact PC trend by specializing in computers that are, well, mini. The company was formed in 2012 and, according to their mission statement, MINISFORUM is “committed to providing customers with quality after-sales experience, and we will listen to any constructive suggestions. The problems encountered in the use of products are exchanged in the forum. So we will respond to all the questions in the first place.”

After receiving feedback from several of MINISFORUM’s earlier computers, including the DMAF5 that we previously reviewed on GBAtemp, they created the U820 and U850 mini PCs. I was given the opportunity to review the U820 system, which may well become my main office computer moving forward. At $599 for the U820 model, let me explain why I believe this is a great value PC.

What's in the box? 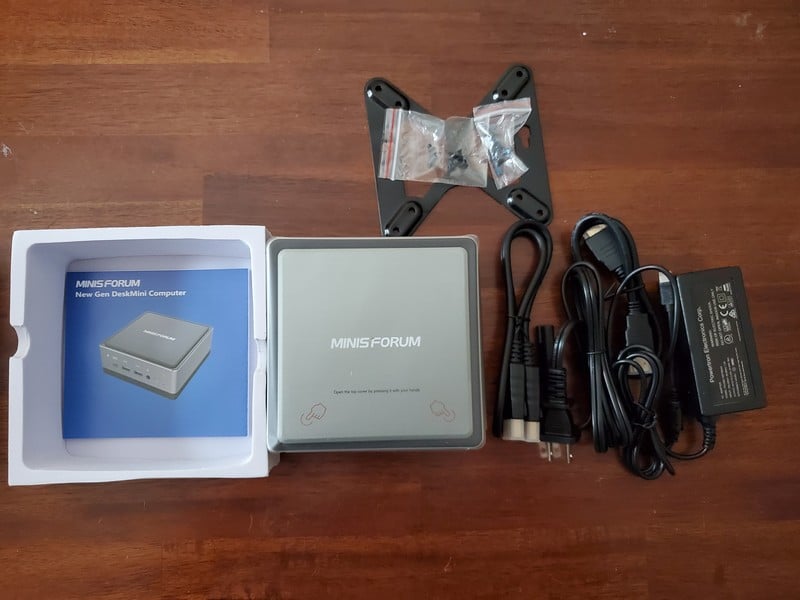 The no-frills compact packaging came with nothing but the essentials, including the: 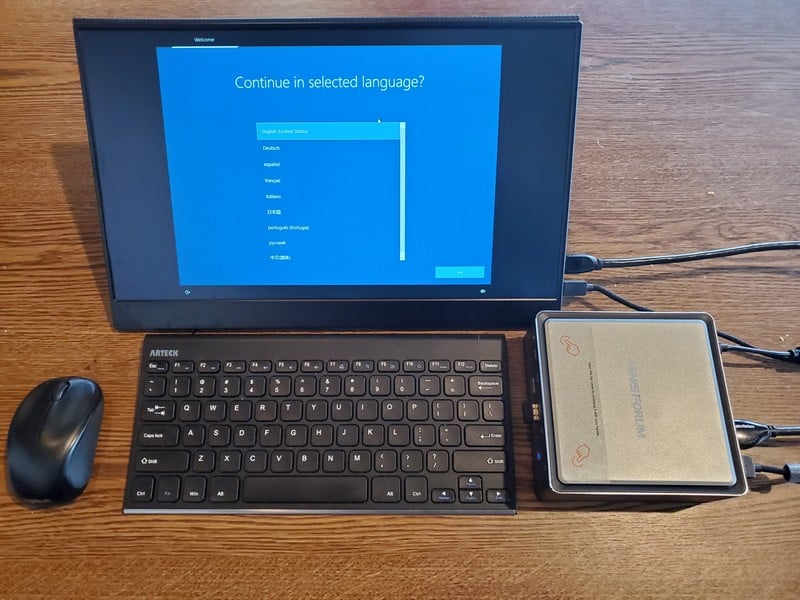 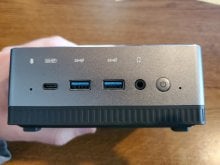 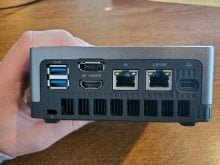 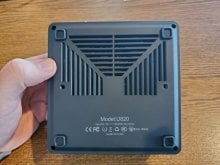 The U820 is a very portable and nice looking computer, with a strong build quality. The body of the computer is a matte silver metal, the bottom is black plastic, and the top is a silver plastic. Let’s take things one at a time.

The front of the U820 has all the basics that you need: a small power button, a 3.5mm headphone jack, a digital microphone, a USB-C port for data transfer, and two 3.1 USB ports. One side of the PC is blank while the other side handles ventilation. The back of the PC has two more 3.1 USB ports (bringing the total to four), an HDMI port, a display port, two ethernet ports—one RJ45 gigabit and one 2.5 gigabit—as well as a USB-C port for the power adapter.

The bottom of the case is very well ventilated, as it has four little rubber legs on each side to slightly raise the PC to allow for efficient cooling. The top of the case is the interesting part, because pushing down on the plastic is all that you have to do to unlock the case and get to the innards of the PC. 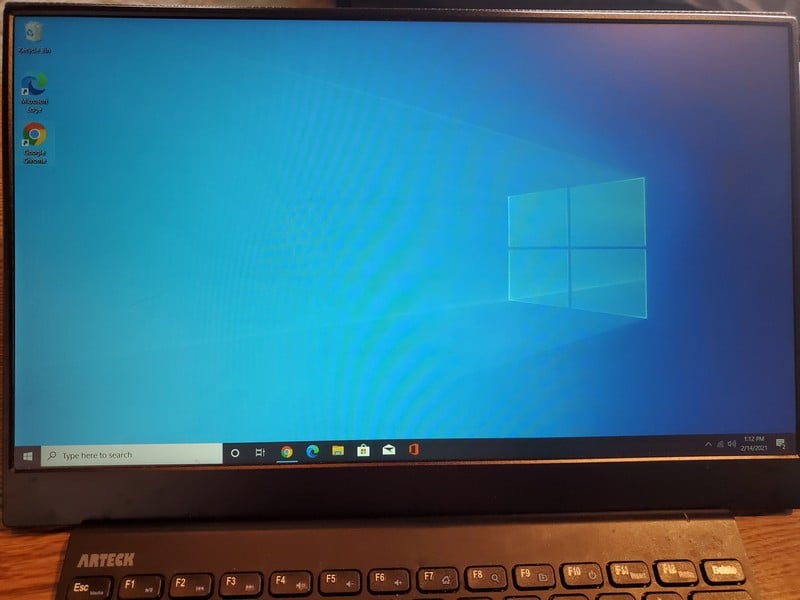 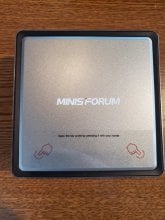 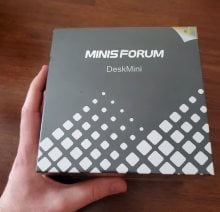 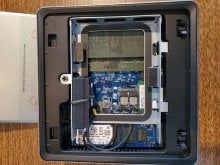 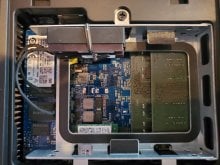 It is clear that MINISFORUM had expandable storage in mind when creating this PC because the first thing you see when popping the cover off the computer is how easy it would be to add a 2.5 HDD or SSD in addition to the 256GB NVMe SSD that comes included with your purchase (or 512GB if you opt for the more expensive option). It also makes it extremely easy to add more memory, although it already comes with two sticks of 8GB RAM for a total of 16GB.

Windows 10 came preinstalled so as soon as I plugged it in, plugged it in to my portable monitor via HDMI, and took up two of the four 3.1 USB drives for my small mouse and keyboard, I was ready to go with my minimalist PC setup. It just works. 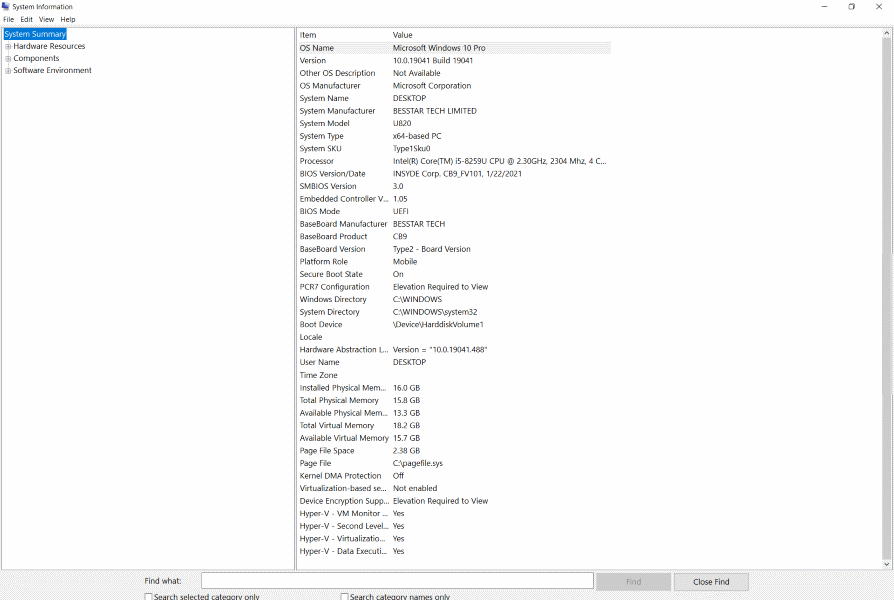 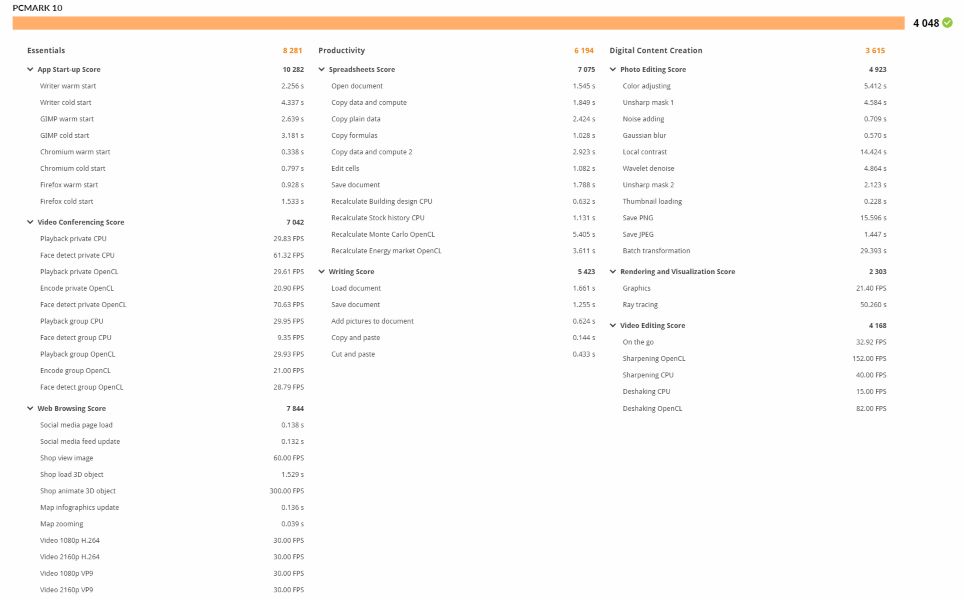 The U820 packs quite a large punch in such a small form factor, boosting an 8th generation Intel Core i5-8259U processor, a downgrade from the U850’s i5-10210U processor. When paired with a 256GB NVMe SSD and 16 GB of ram, this PC is extremely fast and efficient in churning out routine office tasks, though not so much when it comes to gaming.

First, let’s focus on what the PC does well. Right out of the box I ran benchmark tests with PCMark 10. Overall, the program gave high scores to the U820 in the essentials and productivity areas, and a decent score when it comes to digital content creation. In essence, this means that the computer runs smoothly when utilizing programs like Word, Excel, Zoom, or web browsing. In fact, this review was written on the U820 and I’ve had no problems with any of the aforementioned programs. Further, due to the overkill that is this PC’s cooling chamber, the U820 is extremely quiet when handling these essential tasks.

I’ve also tested how fast the SSD really is by cold-booting the PC several times. The computer went from completely off to the windows login screen in an average of about 21 seconds. Only the snobbiest of computer snobs would be disappointed with a 21 second loading time, especially since first and foremost this is a mini office computer and not a several thousand dollar gaming rig.

Next, let’s talk about digital content creation. The majority of the photos and screenshots included in this review were resized and edited using the U820 and I never ran into a hiccup. As you can clearly see, the editing was not very intensive but the work was done fast and the computer never struggled to keep up, making it perfect for light content creating.

However, when we get to video editing is when the U820 starts to struggle a bit. I rendered a video that was 1 hour and 15 minutes long using Sony Vegas, and it didn’t take long for the program to completely take over the U820’s CPU. In the its defense, I was rending the video at 1080p 60fps and it did eventually complete the task. It took 3 hours and 4 minutes to render the video, which isn’t too bad considering the quality and length of the project. While doing this, the computer’s fan did indeed make more noise than when just running Microsoft Word, but I was surprised to find that even when using 100% of the CPU, the fan wasn’t very loud at all. This shows that the U820 really was designed to be innocuous and unobtrusive, even when completing tough tasks. 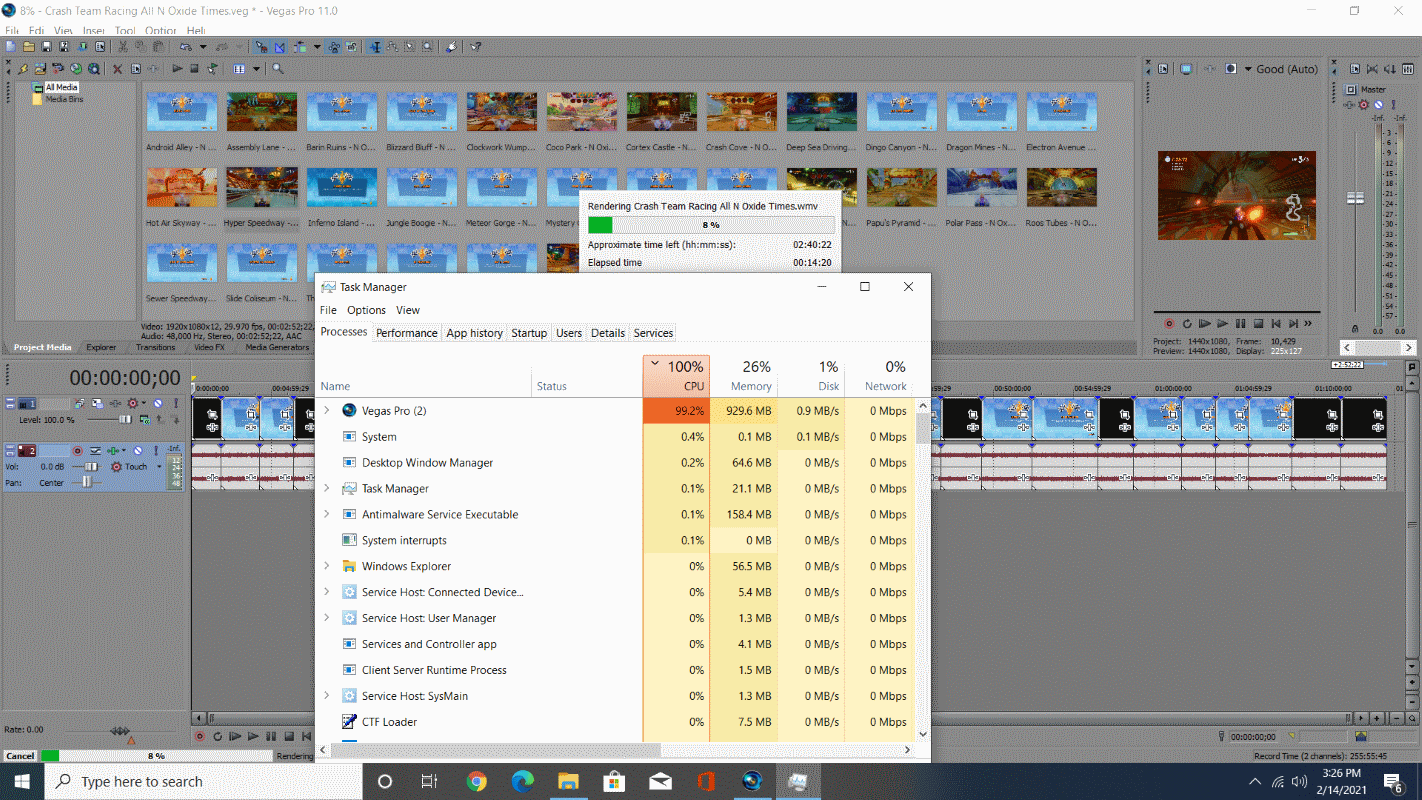 Next, let’s get to gaming. I tested several games on the U820, two of which I knew wouldn’t work. The results, from most intense to least intense are as follows:

When it comes to gaming in general, the U820 actually ran better than I expected. While clearly it will not be able to handle very asset heavy games, this is a great machine for light gaming and general emulation. Even when blasting through the opening cutscene in Horizon Zero Dawn, the fan was never loud enough to bother me.

I really enjoyed MINISFORUM’s U820 and its small form factor. Having recently started a new job with a small (and already cluttered) desk, I’m very happy to take advantage of this PC’s small footprint and great performance. All of my tests were done while using the stock features of the PC, but you can always stick some more RAM or an SSD in it for some serious performance!

If you are in the market for a small but powerful compact PC, you should look into the U820. The PC sports an i5-8259U processor, 16 GB of RAM, a 256GB SSD, and is very user friendly and upgradable. Truly, this is a big product in a small package.
Reactions: Y0shII, Julie_Pilgrim, KiiWii and 5 others
Share:
Facebook Twitter Reddit Pinterest Tumblr WhatsApp Email Share Link
How long did it take for them to ship this to you? I ordered an H31G about three weeks ago, and according to Shop (the tracking app they recommend you use), it's not even been shipped out yet! I know, COVID and all, but considering I sent them an e-mail last night that they haven't responded to yet, and that I've read other people who have been going through the same thing in various comments sections on the Internet, I have a pretty good hunch that I'm not alone in my desire for better communication.
Reactions: Julie_Pilgrim
good enough to build a arcade cabinet around?
Reactions: Julie_Pilgrim
@raaamesh As long as what you're trying to run isn't gonna require a dedicated GPU, you should be fine. Otherwise, if you're looking to run, say, Mortal Kombat X, Injustice 2, MK11, you know, fighting games that put some stress on processing both for the CPU and the GPU, then I'd go for the H31G...assuming you don't mind waiting for who knows how long it'll take for the company to get its act together and at least keep those who already put money down that, as it turns out, they could have spent more if they wanted and got an even better mini PC in an Intel NUC that you can pre-order right now and it'll ship faster and with better communication from a company that at least still has some recognition as opposed to this Hong Kong-based outfit that, for me personally as a paying customer, still has yet to impress me in communication.

I get delays because of COVID, but when things are arriving late, I at least would love to be re-assured that things are still moving along. I ordered a bunch of clothes from Vapor95 recently, and in the December-January month, they had issues that, come January, they communicated to their customers about, and not long after, I managed to finally get the clothes I paid for! All I've got is the confirmation e-mail that an order's been placed, and that's about it. Which is why I'm curious if Eric here experienced anything similar to what I and apparently others are dealing with.
Reactions: Julie_Pilgrim and raaamesh
How is this thing doing with decoding? am looking for a Media Server Setup that would decode the videodata so it does not matter on which device i will play my content, mainly with plex. i think that thing would have enough power for that. coupled with an external HDD RIG for the neccessary space of course.
never tested with MINECRAFT? shame on you OP!
Reactions: Redhorse
Can it be fitted with am AMD Ryzen processor instead? Perhaps one that packs a bigger punch?
Reactions: Julie_Pilgrim
Mucho dinero, señores.
Reactions: Y0shII, Julie_Pilgrim and kazenohibi
I'm in the market for an energy-efficient mini PC to deploy ESXi on, but the Intel NUC 11 looks like a far better value proposition. Also, they should've gone with a 3.5 HDD bay, even though it would make the case a little less compact (and also requires a 12V lane).
Reactions: Silent_Gunner
$600??
Reactions: Julie_Pilgrim
Just curious, when you were running BOTW through CEMU, did you setup the emulator according to any of the videos out there? There's plenty of tweaks that can be made to run the game better through graphic packs like FPS++ and game profile tweaks. Should you have the time to try and test to see how the performance is!
Reactions: Julie_Pilgrim and Silent_Gunner
beelink. all im going to say.
Reactions: Silent_Gunner

Horizon Zero Dawn
Breath of the Wild
Click to expand...

Why not Assassin's Creed Origins and Twilight Princess HD, for both a native game and a Cemu game? Or Xenoblade Chronicles X, or SSB4?
Reactions: Redhorse