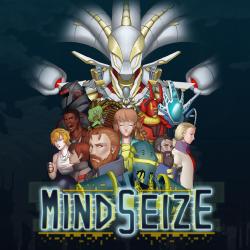 Metroidvania is a flourishing genre, but does MindSeize bring anything to the fray?

MindSeize is a 2D, 16-bit-inspired, hand-drawn Metroidvania game with a twist: fast-paced sci-fi action and a stellar sound score. Jumping into the game you find yourself in a sticky situation whereby your daughter's mind had been titularly 'seized' and you, lead investigator M.C. Fox, have become immobilised and crippled. There is no other choice than to jump into a Mind-Action-Gear Suit (or M.A.G. for short) and get hunting down the leaders of the evil criminal organisation 'Ascend' in the hopes to free your daughter's mind and gain justice for all. 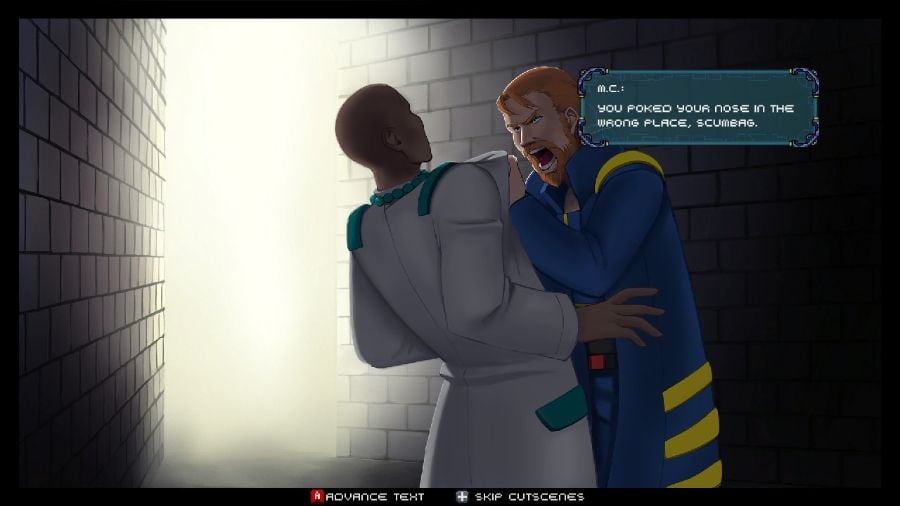 The cutscenes are all hand-drawn, and you can tell. It's not that I didn't like the cinematics, it's that they looked somewhat basic with the characters boringly posed and static, with a very odd but clearly stylised shading throughout. The cinematics also droned on a lot, never getting to the obvious point until it had been laboured out across far too many panels of hand-drawn, comic book-styled story. The look of these sections feels a little amateur and unfinished, but it's nothing a fresh lick of paint or a new artistic style couldn't remedy, paired with a little cutting down of the length to liven the pace up.

Once you're in-game, though, the hand-drawn aesthetic really comes into its own, with some truly fantastic creations for enemies and bosses throughout the sprawling stages. The animation also shines through with some excellent attention to detail and elaborately-layered animation building for some stunning scenes and truly well-planned crescendos. Robotic and biological organisms litter the landscapes and pose major threats to your health and progress unless you heed the warning signs and utilise your skill set thoroughly. There is a technique to everything, and you cannot just go gung-ho at everything, else you will grind to a halt until you use the right weapon or special move on the right enemy. Sure there are sections that you can storm through and decimate everyone with a blast of your rifle or a slash of your blade, but there are defined checkpoints that reign you in and force you to use your head.

The animations of the characters and their weapons are superb. With bullets cascading to the floor, smoke and particle effects, slashes of your blade dynamically lighting up the screen with a strong graphic styling, and the mechanized look and feel of almost all of them together with their animated articulation--it can be fantastic to behold. Just remember that 99% of that which you find on screen is deadly to you and therefore do not forget to blast 'em up whilst in awe.

Exploration of the four planets is very much a run-and-gun or hack-and-slash affair, but without the comedic stylings of games like Metal Slug, and more science-fiction based locales like a typical 2D Metroid game, but with the looter shooter-esque feel of a game like Destiny, where you kill all enemies in an area, grab all the dropped swag and if you backtrack they're all there again for you to destroy again and again anyway. The visuals take a huge cue form the 16-bit era with some fantastically layered pixellated backgrounds to enjoy. The parallaxing backgrounds also lend themselves to reproduce those days of Amiga and SNES/Genesis. 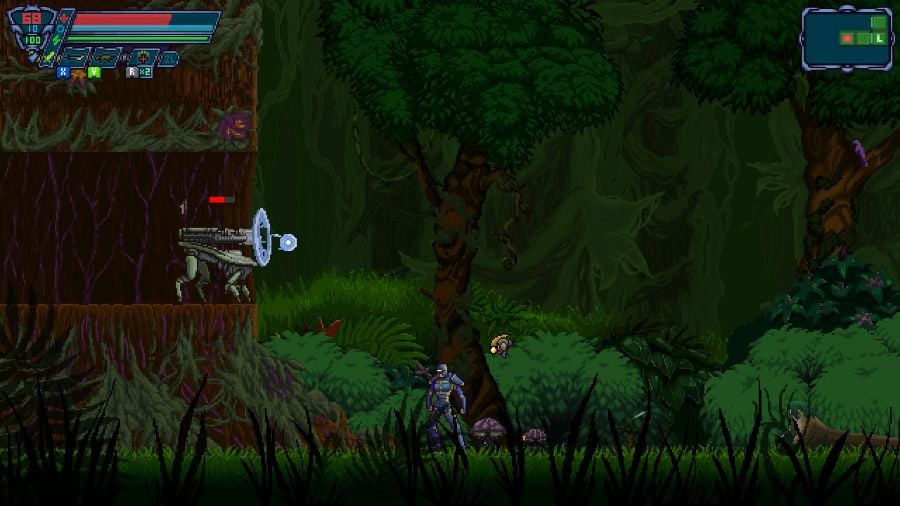 Levels comprise of a labyrinth of 2D platforms, tunnels and open spaces to navigate to an end goal. Thankfully your suit's incredibly capable and with M.C. Fox's mind and consciousness injected into it, you can control it with ease. With a definite Iron Man vibe, the suit can be upgraded in a manner of sections including gauntlets, shields, helmets and hacking accompaniments. The more you grow, the easier the game gets, but the further you progress the more challenging the stages become. Wave after wave of enemy will come at you and it's up to your digital dexterity to get you through the battles in one piece. Failing this you can always heal yourself throughout if you get in trouble, and you can go back to your ship and visit the crew for a much-needed pep-talk.

Controlling the game is a cinch. Jumping, grenade, melee and shooting all happen on the face buttons while dash, heal, diagonal shot and special shot are mapped to the triggers. Why the diagonal shooting had to have its own button is a bit of an odd choice when perhaps an analogue stick could have been utilised better to fit these function, I don't know. The left analogue controls your movement and the right analogue controls your drone's camera, should you like to take a sneaky peek beyond the immediate periphery.

It has to be said that the music and sound effects in this game are truly standout. Every smash, crash and explosion are illuminated with the perfect sound and every minute detail is punctuated with subtle yet accurate foley, which is extremely satisfying. The soundtrack is also top-notch throughout. You have retro-inspired yet techy-futuristic sounding synth-lead melodies and pumping beats to get you through the game's gritty stages. I absolutely loved it! 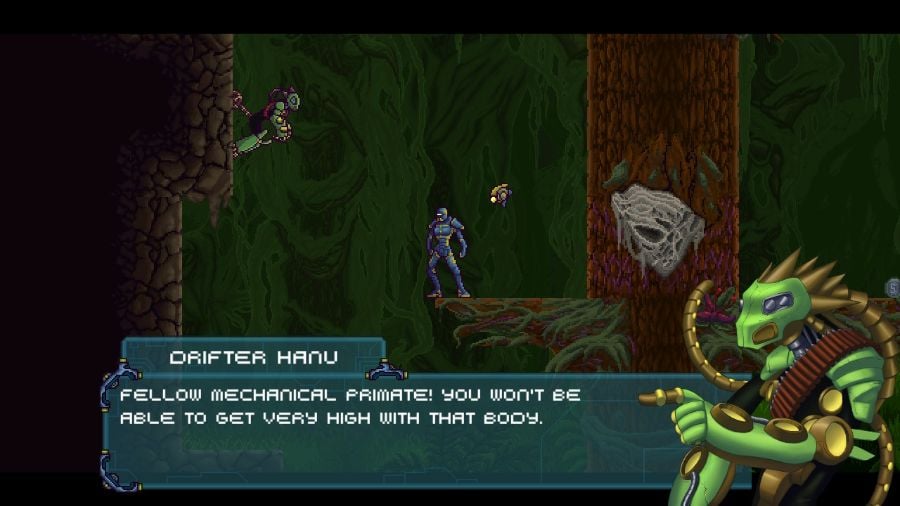 There are 50 mods hidden across the four planets with an array of characters to meet along the way including four hulking bosses, but unfortunately, MindSeize's biggest issue is a distinct lack of unique personality. Sure it has its signature artwork, which some people may adore and some people may question. I guess it does have a story "written by a professional scriptwriter" and comic-strip styling. But I found the story MindNumbing, the difficulty spikes (without using Easy Mode) MindBoggling, and so the overall package is sadly a long way from MindBlowing.

Overall I would have to say that this game is just a little bland and forgettable. There isn't that hyper-appealing spark that some games have. Like you don't really feel for any of the characters, and it's all just a little too formulaic. Hardcore Metroidvania fans will probably enjoy this immensely, but I feel that this is a somewhat low-budget feeling test-run for something that could be far more appealing. Perhaps a sequel will set the world ablaze with some vast improvements over the original, but for now, this game leaves me a little tepid.