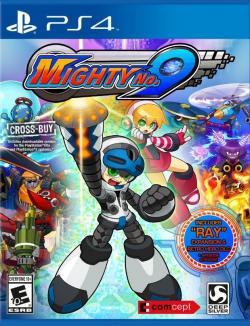 As a lifelong fan of the Mega Man series - I had to jump at the opportunity to review its spiritual successor. After no-living the game for a few days and beating it twice I feel that I have the ability to comment on it properly.
Delay after delay, design change after design change; it’s hard to disagree that the Kickstarter funded game that we were promised back in 2013 turned out differently from its original concept. But is the resulting product something that warrants spending your hard earned cash? That’s what this review sets out to help you decide!

Right off the bat, people have mixed feelings about Mighty No. 9. Many who were excited about it – and even backed it on Kickstarter – feel disappointed by all of the delays and changes that the game went through leading up to its release 3 years later. Others are still ecstatic about it and feel like the delays could only bring upon good things. After all, some feel that most bad games are rushed and most great ones are delayed.

Luckily for me, I don’t care about any of that! I played the Mega Man series and loved it and this game promises to be the spiritual successor to the older Mega Man titles. I am tossing all judgement about the release schedule aside for this review and judging the game based on its own merits.

With all that said, let’s get started! The game takes place in the “present year*” [*see “future”] where robots and men live together in peace – until suddenly all of the robots turn on the humans and the world falls into chaos! Well… Most robots anyway. You play as an android named Beck, the ninth in the “Mighty” series of robots by Dr. White. For a reason not explained until later – Beck is unaffected by whatever is causing the robots to go haywire. Throughout the story, Beck has to use his unique power of assimilation – that is the power to cure the afflicted bots and to take on their powers as his own – to save his 8 brothers and sisters and put a stop to the madness. 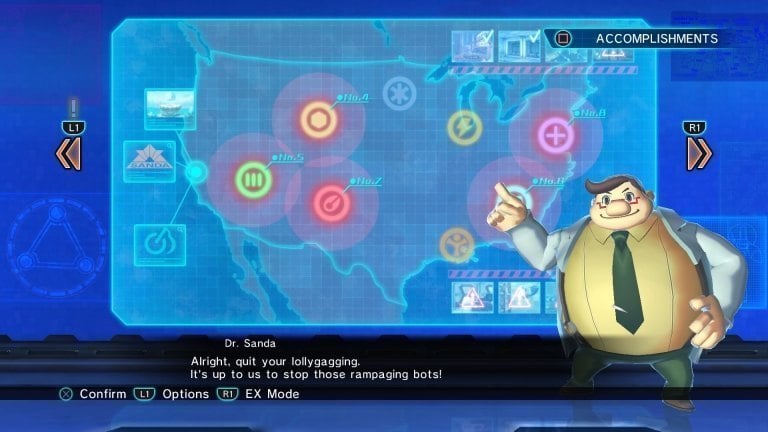 To me, the plot feels a bit stale. Surely this was intended by the team at Comcept, who were inspired by titles where the plot takes a backseat to the gameplay such as Mega Man which had a plot that was actually much shallower than Mighty No 9’s. That said, every piece of dialogue in the game is completely voiced and every character has a unique personality. Unfortunately, I found the voice acting to be on par with 4kidz when it comes to its cringeworthy-ness. In its defense, the Mighty No.’s were designed to have one track personalities so the dialogue works for them. I’m just annoyed that at no point in the game did I feel that the two most brilliant scientists in the world were any more than just bumbling buffoons based on how they spoke.

But who cares about plot? The gameplay is really what makes or breaks a game like this. After playing the game twice (and being the first person on PSN to beat it in under 2 hours) I still struggle with my own opinions about the gameplay. See, the difficulty is all over the place in this game. You start the game with just you and your laser gun. As you progress and save the other Mighty No.’s you obtain their abilities which can help you out immensely in the game. The thing is that after the tutorial level you can play the next 8 stages in any order that you want. In fact, the first stage is by far the most difficult out of the first 8 and as a result you’re better off saving it for much later. 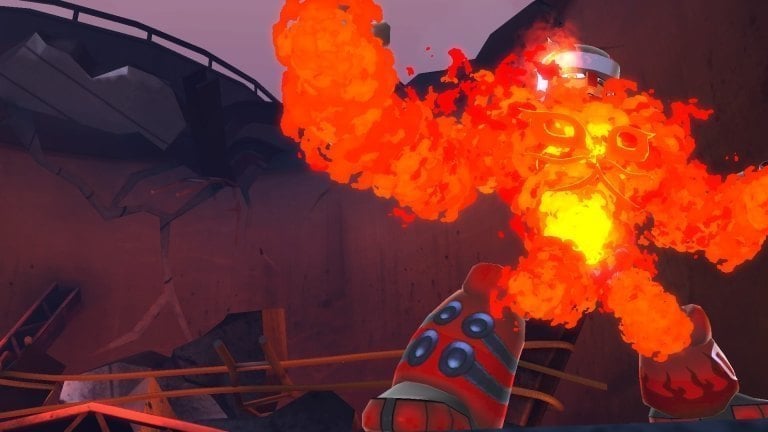 In a typical game the difficulty gradually increases as you go, despite any upgrades that you obtain. In this game however it gets progressively easier after the first level because for that mechanic to work, all of the levels (aside from the first) are of roughly the same difficulty. Then towards the end of the game the final stage takes it to a whole new level of difficulty. Now, I may sound like I have something against difficult games, but I want to point out that I actually love them… When they’re done right. In this case it’s not the difficulty that bugs me but the fact that the difficulty is very inconsistent between levels. Oh and I also want to mention that I’m talking about NORMAL difficulty. The easiest mode is very tough and after completing it you unlock the ‘Hard,’ ‘Hyper,’ and ‘Maniac’ modes. For those (like me) who care about trophies and achievements – there is an achievement for beating the game on both Hard and Hyper and one for beating Hard without restarting. At the time of writing nobody on the PS4 version has beaten Hard mode yet (though some may have and just haven’t synced it), let alone Hyper or without restarting. I like games that have difficulty settings like this but I wish that A) all modes were unlocked at the start, and B) that there was an ‘Easy’ mode for more casual gamers. 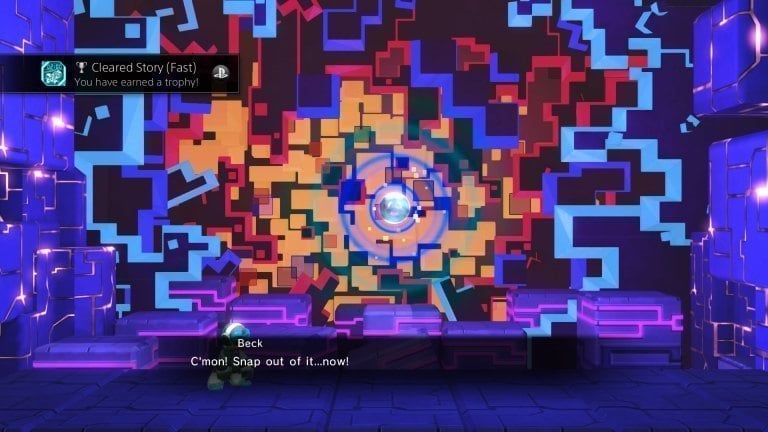 The controls are very responsive in this game, which is good for a title where you need perfect accuracy in hectic situations. You press a button and Beck does it. There’s not a whole lot to say about it, but I have no complaints about the controls - but the framerate has, on occasion, dropped during intense moments. Normally it isn't enough to ruin a session but they do occasionally happen.

At the time of writing this review the game hasn’t been released to the general public (it will on June 21st – the day after this will be published) but so far only a single person has been able to beat the Boss Rush mode – at least on the PS4 version of the game. This will obviously change but I’m mentioning it to point out the difficulty of some of the challenges. Don’t worry, this is the last time that I’ll complain about the difficulty.

And speaking of Boss Rush – there are several modes in this game. Aside from the Story Mode there is also a Solo Challenge mode where you try to complete tasks, a Challenge Co-op mode where you challenge people online, the Boss Rush where you have to beat all of the game’s bosses (yikes!), and an Online Race Battle mode where you race with other players to see who can beat certain levels the fastest. The modes are actually pretty fun but I am bummed that there is no local Co-op mode. You can set up private matches but you both need a copy of the game and separate systems. 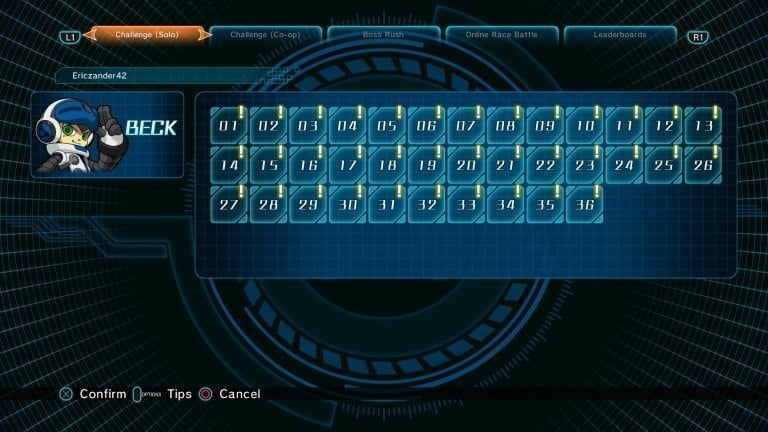 Honestly though, I did enjoy the game. I smashed my head a couple of times through my initial playthrough and complained about the difficulty to my friends – but after I ‘got gud’ I really enjoyed myself on my speedrun playthrough. I will continue playing the game because I’m a masochist who wants all of the trophies – despite the fact that it looks like a difficult and daunting task.

I will say that this game really does feel like a Mega Man game and that fans of that series – especially the earlier titles – will find a lot of enjoyment out of this game. Those who just want an easy game to smash through should look elsewhere. The game challenges you to get better as you play, so it’s also for those who want to see their own skills improve.

I want to conclude by mentioning that the plot of the game set itself up for a sequel. So look forward to Mighty No. 9-2 coming out 3 to 5 years after it’s announced!