Arcades were totally my jam growing up, and they still are! Today I checked out the Space Invaders Micro Player Retro Arcade!

Arcades used to be everywhere until people gave up on ramming money into a machine in favour of playing ported games on their consoles at home. Growing up I had the luxury of Trocadero at my doorstep, and Namco and Sega World just around the corner. I also had my guilty pleasure Street Fighter 2 BlackBelt Edition I used to overly frequent at my local chippy, and ever since I have been hooked on arcade machines thanks to the pure thrill and excitement of the glowing lights and punchy sounds. Space Invaders was a little before my time, hailing from 1978, a good few years before I even existed, but I know this game inside out. I have played it repeatedly, and I know its stone carved importance in the stage of history.

Taito blew everyone away with their shooter, and some three years after its inception it was hailed as one of the highest-grossing entertainment products of its time, raking in a whopping $3.8 billion. Not only was it a commercial success, but it catapulted arcade gaming into the spotlight and almost single-handedly caused the video gaming explosion of the '80s that saw a niche little hobbyist pastime become an entire video game industry that we still enjoy today.

Stop the Invasion! Jump in your spaceship and fend off the waves of attacking enemy invaders before they land. Originally released in 1978, Space Invaders™ impact was revolutionary, becoming an instant global phenomenon among arcade enthusiasts and introducing many others to video games. 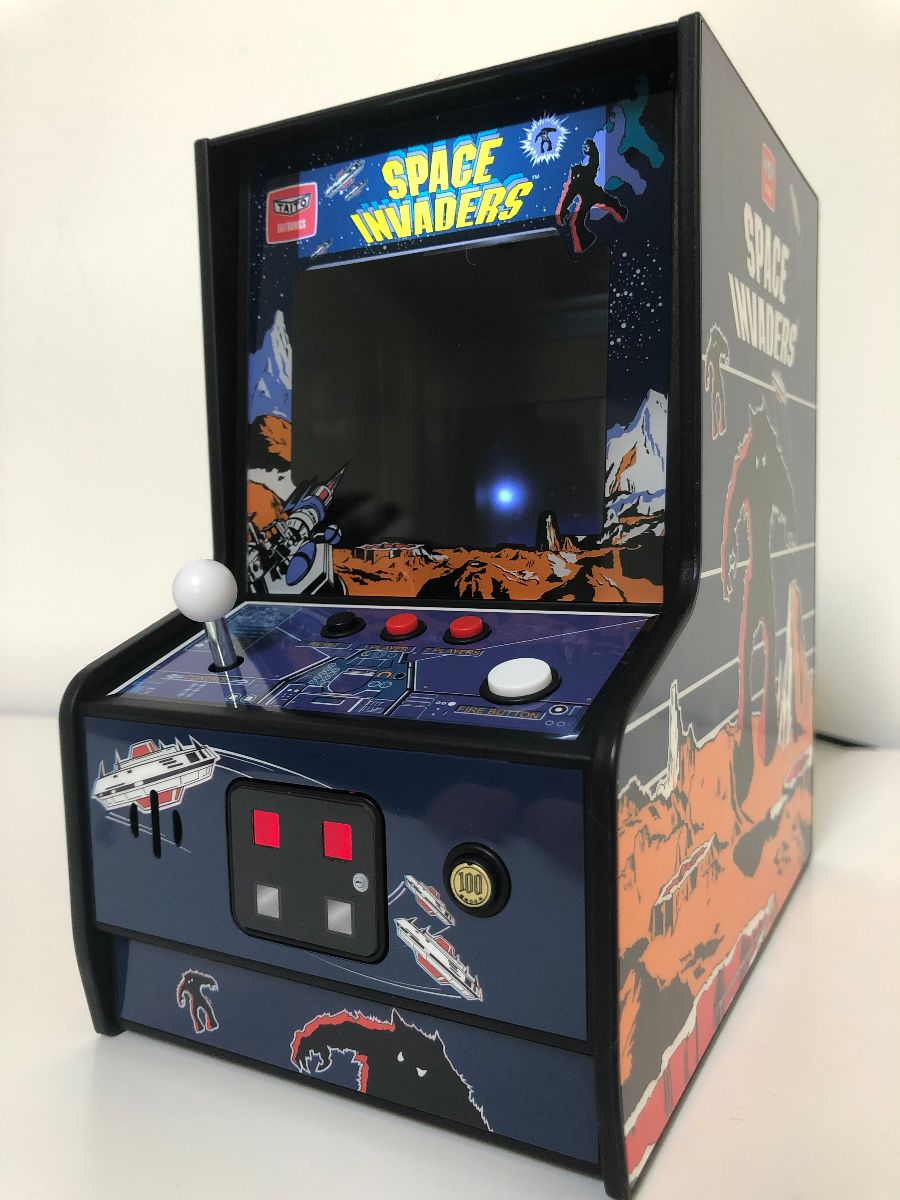 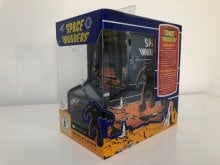 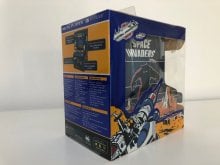 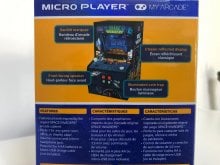 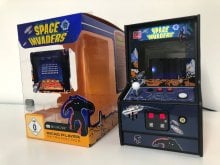 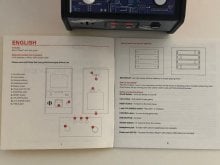 The original arcade cabinet clocked in at around  (64" x 26 1/2" x 34") overall dimensions, making this little replica approximately a diddy 1:15th scale version of its glorious gargantuan ancestor. While it retains the charm and looks of the classic cab, it isn't exactly the same in all proportions, probably due to making the size of the screen more acceptable for miniaturized play. The unit itself accepts either four AA batteries for a couple of hours worth of play or a 5v micro-USB for endless fun. The option to have either battery or a power cable is a masterstroke, as you can either leave it set up in your man/woman cave or take it on the move with you to share with your buddies. Myarcadegaming.com also stocks a 4-way micro-USB cable for $9.99 to let you set up to four of these units side-by-side to the best effect of recreating your childhood amusement arcade centres in your own home!

Powering on the unit, you simply press the button cunningly disguised as the coin slots, and the unit comes alive. The marquee lights up along with the coin slots to give a pleasing glow to the unit, and while not in play it runs a demonstration in complete silence. At first, I thought this was a glaring omission, and that the unit should squark out sound effects in the background to attract me to it. After a thorough play-test, I can categorically agree that I don't want this thing sounding off rhythmically while I'm not playing it. This unit does feature two handy volume plus and minus buttons on the back, to manage the loudness during play, and it also has a super handy 3.5mm headphone jack for truly personal play! Overall the sound is crisp and clean, but not overly loud even when cranked up, and another godsend is that when you turn off the unit the sound volume reverts back to its default middle level, and not the highest level you set it to and forgot about during your last game session. Good thinking there! 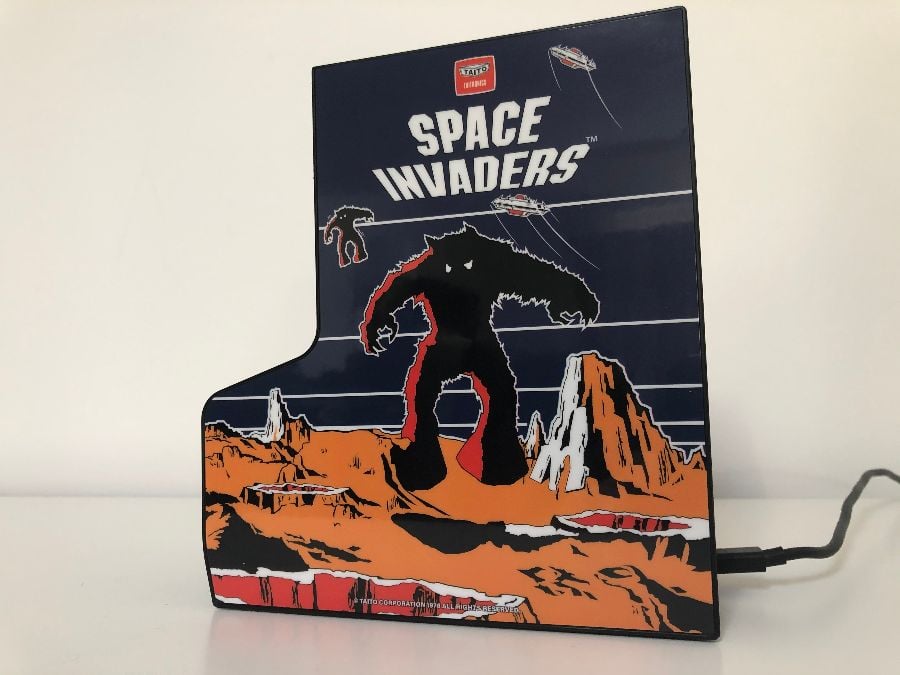 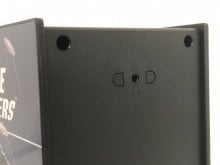 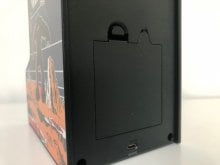 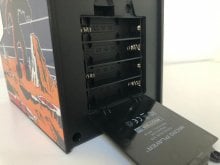 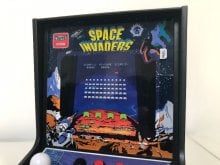 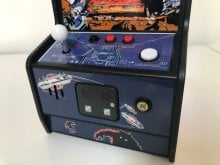 The controller layout is identical to the original arcade, with just a joystick, player one and player two buttons, and a fire button to deal out the singular bullet devastation against your invading foes. The front of the cabinet features a coin button to simulate coin insertion, and with a quick flick of the wrist, you can have 99 credits ready and waiting for the 9 martian waves. The joystick measures just 2cm in height and is effectively just a two-way switch, controlling your vessel on just the horizontal axis left and right accordingly. The buttons aren't as clicky as I would have liked--they're soft and smooshy but silent when clicked which again was probably a design choice to make the machine less annoying to people who aren't playing: a good decision. At the top right, you also have a reset button to reset the game, which wouldn't have been present in the original, but it's a good feature to have at your fingertips should you wish to rage quit a 42-year-old game.

The Micro Player features a 3.5" square viewport onto a reflected backlit screen, from a source display that looks to be approximately 3" x 2" (3.5" diagonal) in size. This backlit display uses three LEDs each side of the screen, in a vanity mirror layout, to illuminate the martian terrain backdrop, while the LED panel just displays the characters and score which is reflected onto this backdrop via a pepper's ghost-style 45 degrees slanted piece of perspex. While the reflected game sprites are excellent, I can help but feel that the LEDs around the edges are a little overly bright and therefore distracting at times.

Notably, there is a five-digit score display which suggests this is not the 1.00 revision of the game, but a later revision to compensate for gamers racking up insane scores. The original arcade board only used a four-digit display and according to a quick google search the CV and TV editions had five digits, so this is actually not the original "original" experience, rather it is the definitive revised and improved game. And yes; this means the 23rd shot UFO trick only yields less than the super-secret 300 points (and every 15 shots thereafter) thanks to it having been patched out beyond the first revision of Space Invaders. 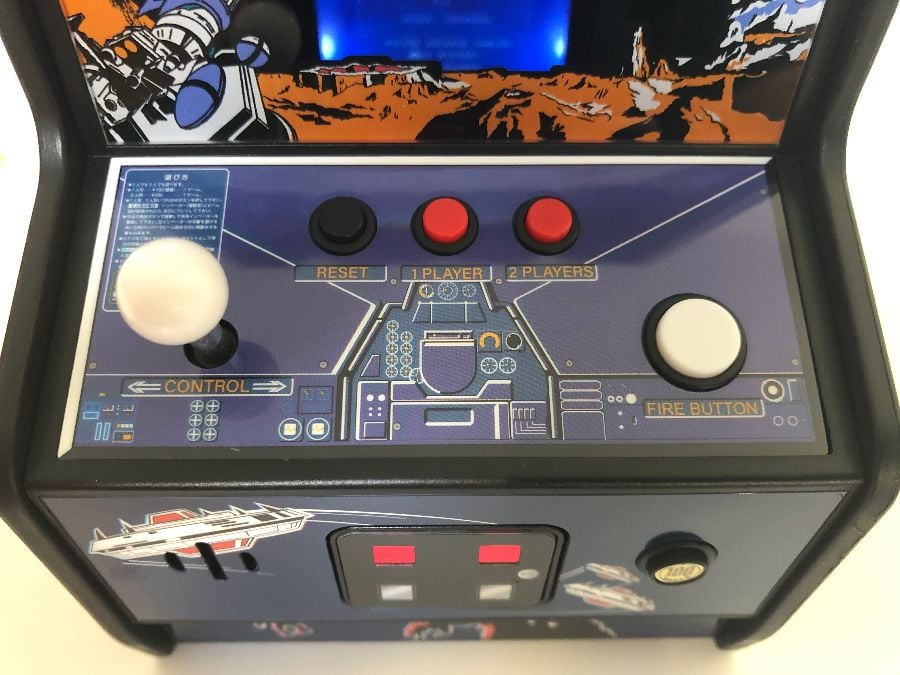 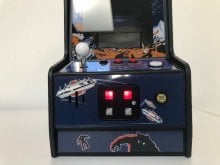 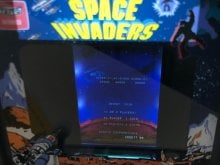 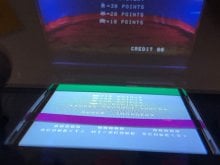 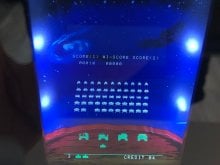 Overall the controls are responsive, the light and sounds are great and the experience is extremely nostalgic, if a tiny bit cramped. Using your thumb and index finger on the joystick is great but it's not curling your entire palm around the ball of the controller and slamming it left and right. I would say the scale of that single component is my only real quibble, but it's not that big of an issue if you'll pardon the pun. I allowed my wife and a few others to have a look at this and give it a go, for science, and every single one of them (without fail) thoroughly enjoyed themselves. Each person's eyes lit up just seeing the striking cabinet decals, even before admiring the clever screen projection technology, and they all had a frivolously fun time trying to beat each other's scores and best the alien invasion. I would say that bar buying a 1:1 replica cabinet, the Micro Player Retro arcade line is as authentic as you could possibly want in a tabletop system. 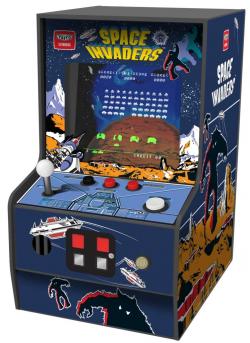