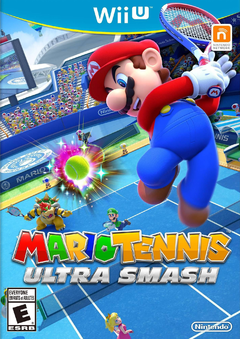 When it comes to adding desired features to popular game franchises, Nintendo giveth and Nintendo taketh away.

Waggle all you want, it won't help!

What was it that caused so many casual gamers to flock to the Wii back in 2006?  It was the innovative idea of playing electronic sports at home with motion controls!  Why go out and bowl with your friends when you could skip the smelly sneakers and negative looks from people when you ask to use the bumpers when you can just sit at home and get the experience right there?  It was a strategy that caused Nintendo sports games like Wii Sports, Wii Sports Resort, Wii Play, Mario Super Sluggers, and Mario Power Tennis to sell like hotcakes with generally positive reviews.  So who in the world decided that Mario Tennis: Ultra Smash wouldn't need motion controls?  That's right, you are able to play the game with the Gamepad, Pro Controller, or Wii Remote (held sideways) but motion controls are not an option.  I'm really grinding at this issue in the beginning of this review because even though it did not bother me all that much since I'm more into classic controls anyway, I'm baffled that a feature that many love, including my significant other who was instantly turned off of the game as a result, was completely removed. 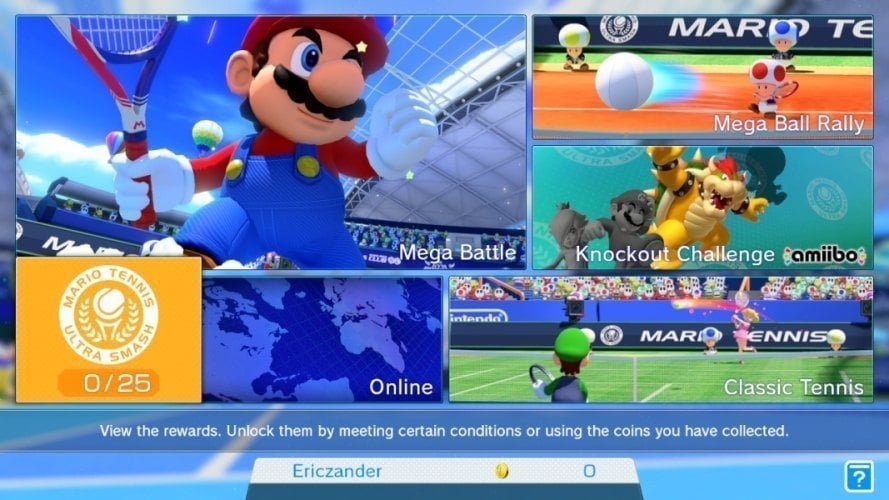 Now that I got what the game doesn't have out of the way, let's go over what the game does have.  There are five different modes: Mega Battle, Mega Ball Rally, Knockout Challenge, Classic Tennis, and Online.  The main mode where most of the local multiplayer action will be taking place in is the mega battle mode.  That's the unrestricted mode where basically anything goes.  You can play a doubles or singles game which supports up to four different players.  If you're playing solo, of course there's the option to play the computer with three difficulty settings.

One of the coolest features of the game is the addition of the mega mushroom which, you guessed it, allows your character to go MEGA--er that means giant. 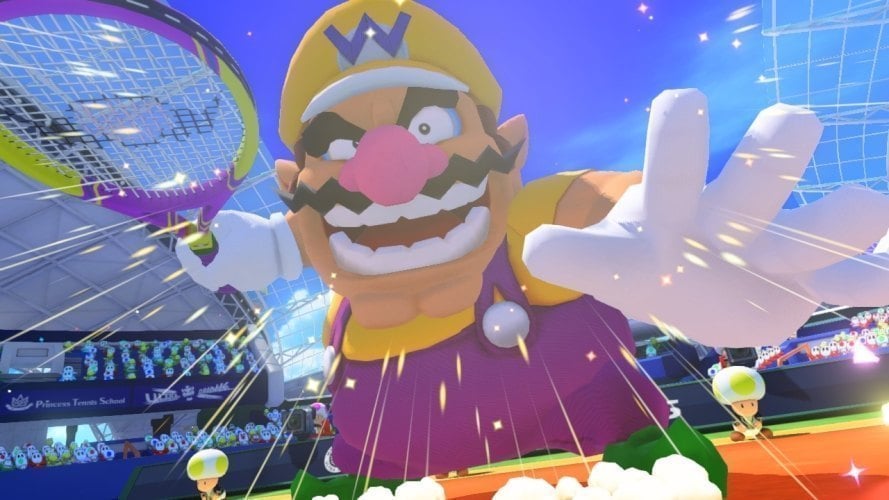 Being a giant has its pros and cons.  While they gain an advantage due to more powerful strikes, it can also make it harder to see the ball and if you shrink in the middle of match you will most likely miss the ball.  Due to the fact that there are no motion controls, strategy boils down to simply being in the right place and hitting the right button, or combination of buttons, in order to hit the ball.  Throughout the game there are many places where you can stand that announce what buttons to press to do a special trick.  When you stand on a purple spot, press Y once or twice to hit the ball farther.  On a blue spot, hit B to do a curve ball.  On a red spot slam the A button down to send that sucker flying. 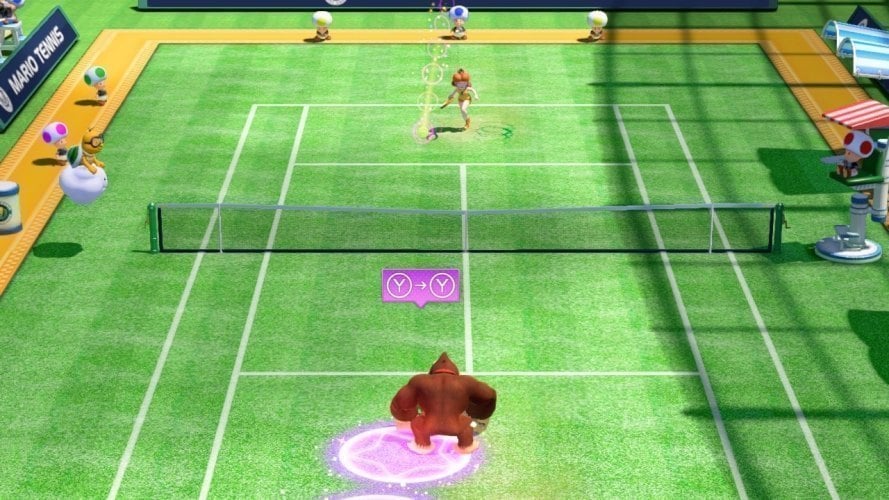 I would be lying if I didn't admit that I get a kick out of pressing the correct combination and watching the ball fly past my opponent.  I even found myself smack talking my opponents, human or not.

Another pretty neat feature of this game is that it shows a (skippable) replay after each bout of action.  Unlike in Mario Kart, you are unable to save these replays but that's acceptable because they are very short and wouldn't make for a very interesting video.  However, it's during these replays that you can really appreciate how pretty this game really is. 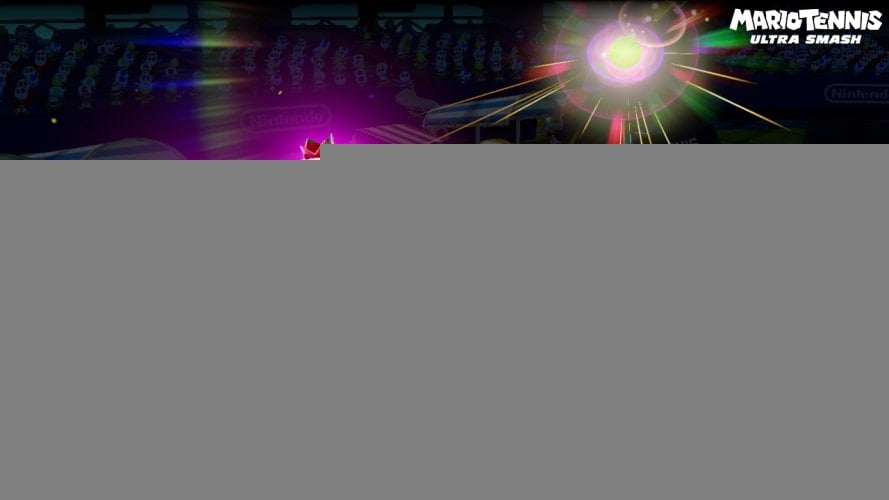 In addition to Mega Battle, there's the Rally mode where you and an AI see how long you can rally the ball back and forth.  It makes for some fun practice, but I didn't spend very much time there because after a few minutes I realized just how repetitive it can be.  For people who want a more traditional game of tennis... Go outside.  I'm kidding, that's just silly!  There's a classic mode where you can play doubles or singles while nixing the mega mushrooms, chance shots, smash hits, and jump shots.  The classic mode is instead based completely on running back and forth hitting the ball, following the actual rules of tennis.  I can certainly see the appeal in this mode since it's more like the Wii Sports method of play...  Oh wait there's no motion controls.

The characters in this game can be divided into three different classes.  Speed, Power, and All-Around.  I don't think it would be too difficult to guess which player fits into each category.  I haven't noticed a difference between two characters in the same category so as far as I know Donkey Kong, Bowser, and Wario are all different skins of the same exact character.  The roster is also disappointingly small.

This wouldn't be a 2015 Nintendo game without some amiibo support, so in the knockout mode you are able to train all of the amiibo that this game supports. (Hint: everyone who is unlockable in this game). 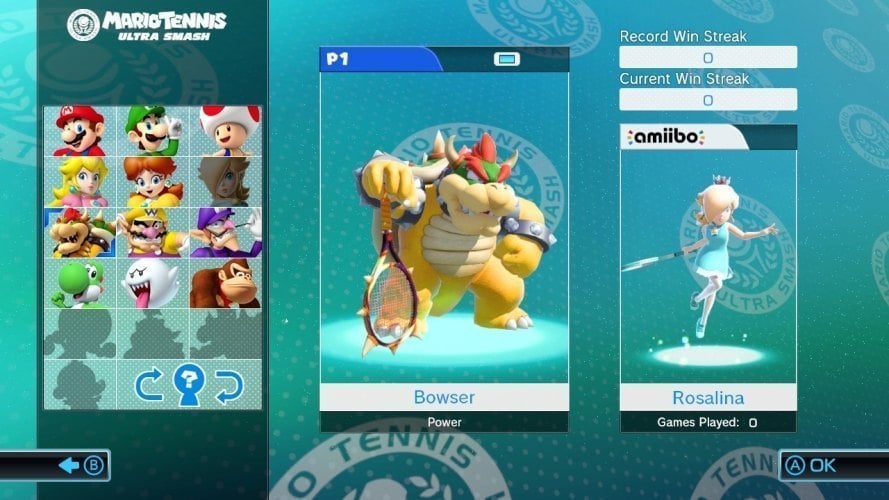 As you play with your amiibo they level up and get stronger and faster.  Of course, if your amiibo are being used for other games then you'll be unable to save the data from this game with them.  That's a huge bummer, but that's the fault of the amiibo and not of this specific game since amiibos can only hold data for one game regardless of which title it is.  After beefing up your amiibos, you can then take them online to help you out in doubles matches if you can't find a suitable partner to play with.

Speaking of the online multiplayer mode, -SPOILER- there's no voice chat...  Shocking.  Again, Nintendo is silly when it comes to removing features to "protect the children."  When it comes to connection issues with this game I would put it on par with Mario Kart 8 which experiences very little lag, and miles above Super Smash Bros U which I feel is unplayable online.  What urks me is that you can't play your friends online.  I mean, you can play with your friend sitting right next to you online, but you can't play somebody from your friend list online.  Also, after every match you are teamed up with another player so you will be unable to do a rematch with somebody who just barely beat you.  That drives me off the wall and to be honest I don't know why they would do that.  I'm hoping there is an update in the future that will add more online features.  On the other hand, I'm not going to kid you...  This game was only released as filler as we wait for Xenoblade X, Star Fox Zero, and Zelda U.  I'm not sure that this game will get much future support.

As for replay value, there is also the rewards area. 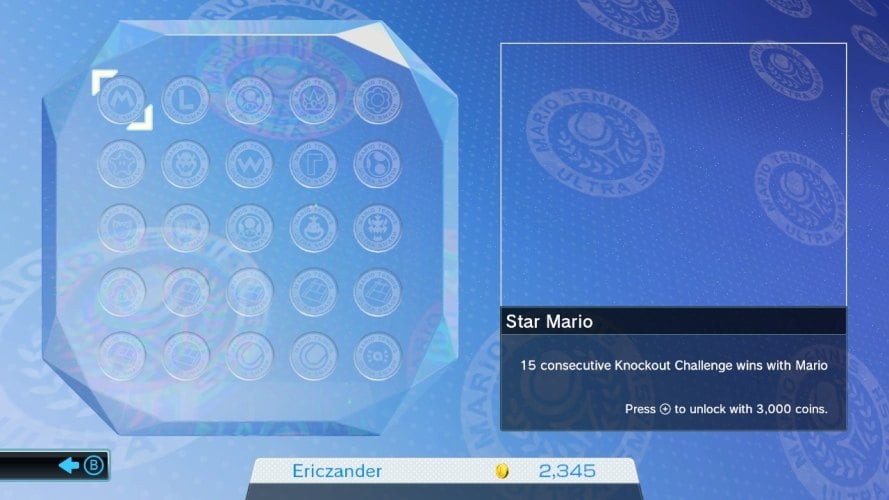 There are 25 awards to unlock which can be gained by either completing the tasks or by spending coins which you earn after each gameplay session (I haven't found any other use for these coins).  Being a completionist myself I may be willing to try to unlock them all but the tasks aren't very difficult.  Most of the tasks involve doing chores like beating the Knockout Challenge x amount of times with character y.

Let's wrap this sucker up

Overall, the game is decent.  It's a bit disappointing at times but for casual gamers it can be a real blast in short bursts.  If the online mode had more meat to it then I'm sure the game would be improved upon immensely.  I'm a frugal guy, so I was saving my biggest complaint for last.  This game costs $49.99 at most locations.  This is a world full of amazing AAA titles that can be gotten for far cheaper than that which provide much better experiences.  So I cannot recommend Mario Tennis: Ultra Smash at this time.  Once the price drops and used copies start to flood the market, that's when I can recommend the game at $19.99.  I love Nintendo and I love Mario.  I'm just disappointed that they're giving us lackluster filler as we wait for the main course of 2016.  I believe that Waluigi can summarize my thoughts of the game. 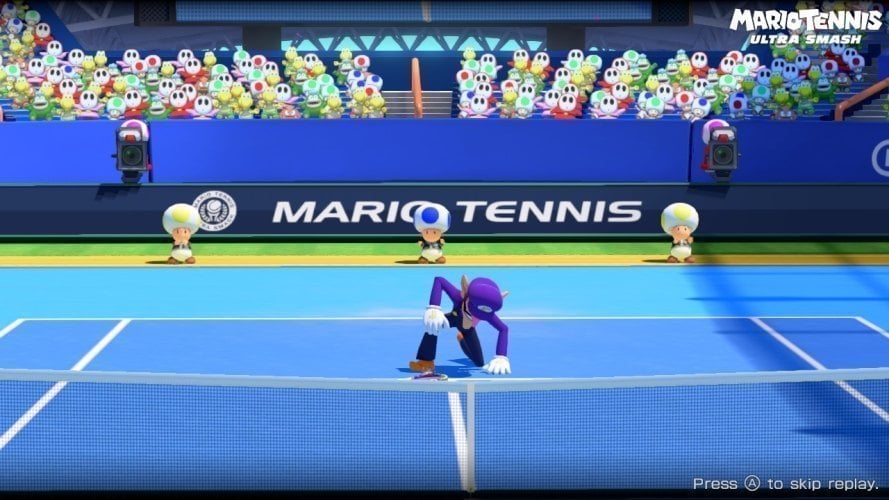