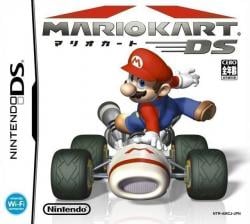 Mario Kart DS has a lot to offer but let's start with the first and main feature of the game. As far as singleplayer content goes, the three standard modes here since Super Mario Kart and Mario Kart 64 are here, Grand Prix, Time Trials and VS Mode plus two extra modes, Battle mode and MKDS's exclusive Mission Mode. Grand Prix features four different classes (50cc, 100cc, 150cc and 150cc mirrored) and two prixs with eight cups! The Nitro Grand Prix consists of DS's original tracks while Retro Grand Prix features tracks from every entry up until DS. One for each system. Therefore each entry (Super Mario Kart (SNES), Mario Kart 64 (N64), Mario Kart: Super Circuit (GBA) and Mario Kart: Double Dash!! (GCN)) has 4 tracks represented. The selection here is not the best, and they have comprimised on a few tracks like Baby Park going from 7 laps to 5 laps and Yoshi Circuit losing it's cool hidden pathway. Races are fun, quick and wacky. MKDS would be the most fair and balanced Mario Kart to date, if it weren't for the items. In total there are 12 characters and 36 karts (adding up to 3 karts per character, 2 being unique and 1 being the standard boring kart). The 4 unlockable characters, Daisy, Dry Bones and Waluigi are boring additions other than Waluigi, our lord and saviour who is in Mario Kart but not Smash for some reason. The final unlockable character is R.O.B, wait what? R.O.B the robot? Yes THE ROB the Robot is in Mario Kart for his debut! He has a standard kart and his block accessory (ROB-BLS) and some form of legs (ROB-LGS) as karts. Models are overall good except from Donkey Kong, Bowser and Mario. Mario looks like a cheeseball compared to his SM64DS appearance and Bowser just looks low-poly and DK. DK. DK. DK.... His teeth are just plastered on as textures and his eyes are flat. If you stood on his model, you would cry. Mission Mode, however, is the meat and potatoes of MKDS. 6 levels that have 8 missions in it that once all are beaten your DS produces some nightmare-fueling sfx and a glowing red icon in the middle for you to fight a boss! Mission Mode is so unique! It also has a, now defunct, online multiplayer service called Nintendo WFC!
Verdict
Stealphie, alexander1970, raxadian and 1 other person like this.
Like this review