"In the future, you won’t even see earphones because they’ll be integral components of your glass frames." This future, predicted by someone, sometime, maybe, is possible as of now and there’s more than one company out there strapping earphones to glasses. One such company is Lucyd which brings its Lucyd Loud frames. Should these be your next pair?

Glasshole. This might be an insult someone threw at you if you’re one of the few (un)lucky owners of the Google Glass. The pioneering smartglass from the tech giant wound up as an ill-fated piece of tech for its obnoxious design and intrusive aspect. “The smartglass is dead, long live the smartglass!” you would hear some proclaim but entrepreneurs are reviving the smartglass concept by striping down features while still providing a high(er)-tech experience around your temples. I’ve reviewed the Mutrics before, which basically packs a headset in a glass frame, and the Lucyd Loud follows a similar concept. 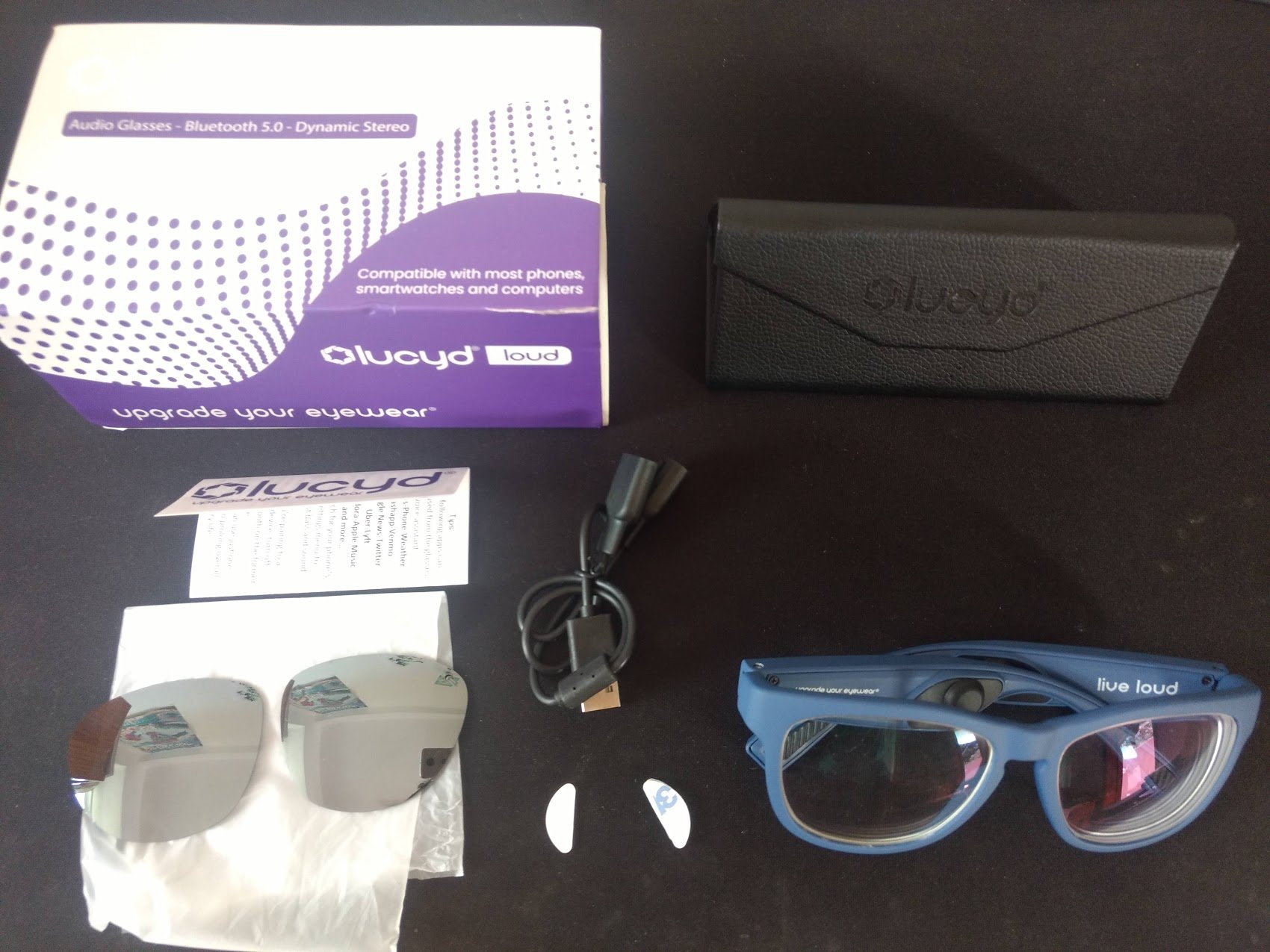 Opening up the box you’ll find the following:

The frames themselves aren’t much different from my dumb frames (yup, it’s come to this now: we can categorize glass frames as being smart and dump! What a time to be alive!), meaning I won’t (hopefully) be termed as a glasshole (whew! what a relief!). 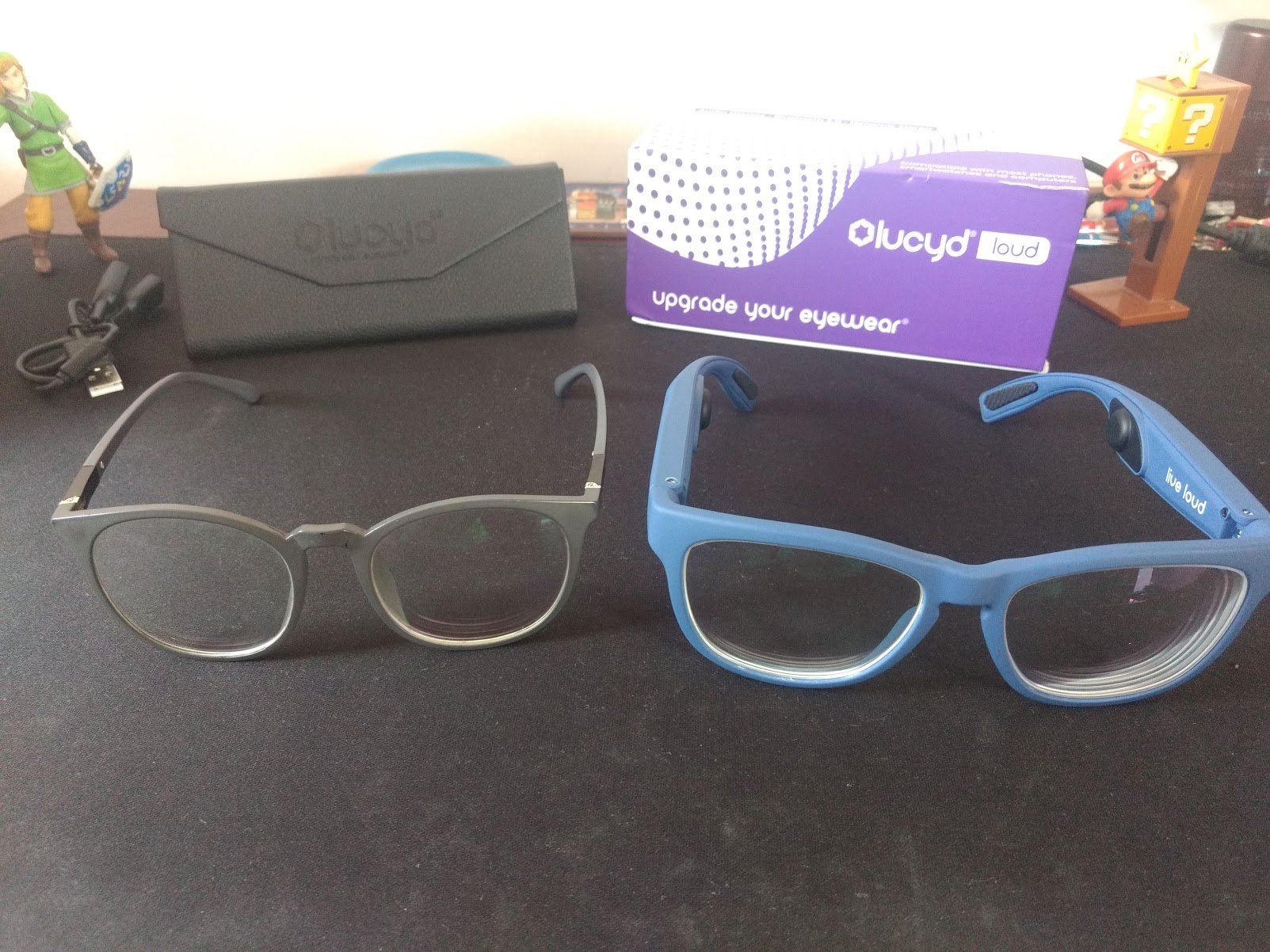 The only noticeable difference is the thick arms which aren’t much of a problem. The build quality is also very good, much better than the Mutrics in fact, and I happen to be fond of the matte finish. Wearing them on also provides a comfortable experience as the 45g/1.6oz easily go unnoticed with the snug fit of the Slim 2020 model that I tested.  First impressions: these can be my go-to frames for the day. However, over extended periods of time, this impression changed. I do feel some pressure around my mastoid processes (the rounded protrusions behind your ears) where the arms end and this requires me to take the frames off for some time. Maybe it has to do with my personal skull anatomy or maybe it's like this for every user as well. 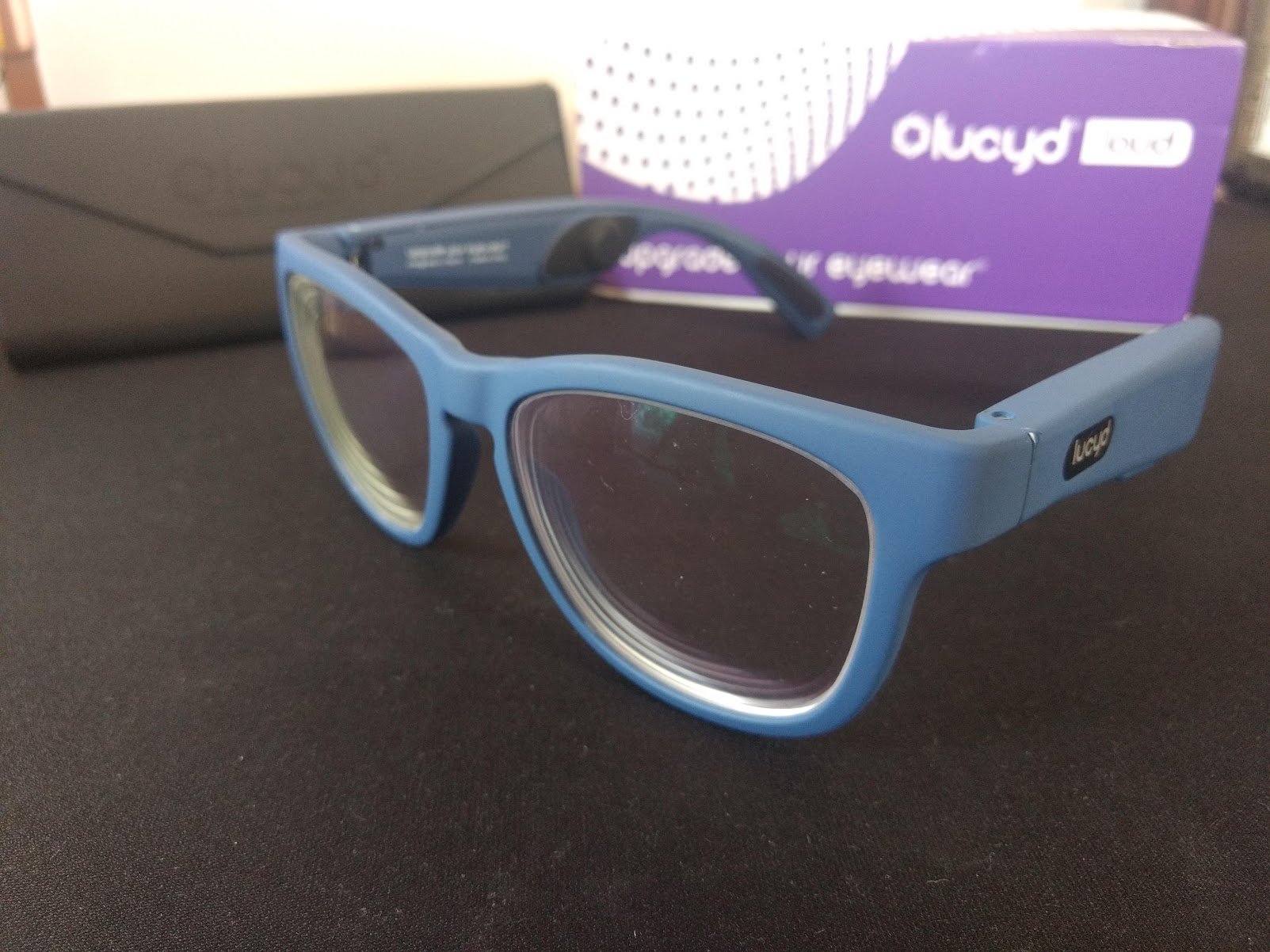 Unlike the Mutrics, Lucyd provides buyers with way more options to its smartglass concept. You can choose from the Youth, XL and Slim models, as well as different colors that suit your style. The model I reviewed was the Slim 2020 as the smaller lens size enables my prescription lenses to be more accurate. Yes, the official Lucyd website allows you to have prescription lenses fitted on the frames when you place your order at an additional cost. There are a number of options to choose from like progressive Rx, single Rx and more. And don’t think that it would be more expensive than other frames since the regular Lucyd frames are priced at $99 and prescription lenses start at $35 for Single Rx. This feature opens the Lucyd to a wider audience, allowing them to use the frames daily with the added tech benefits. Speaking of, how does it fare on the tech side?

For that, here’s a rundown of the specs and features:

While Lucyd trumps the Mutrics on the hardware aspect, it’s not so much the case on the software and performance side of things. Firstly, each arm of the frame has to be turned on and charged separately. On the plus side, it allows you to use each individually as they each feature a speaker and a microphone and save on battery (each can support up to 5 hours playback) but it’s not the optimal experience.

This is especially the case given that the Lucyd Loud uses bone conduction, in comparison to the Mutrics’ mini-speakers. This makes for a sound output that’s noticeably fainter than regular earphones at the same volume and increasing the volume with the Lucyd will only cause the vibration to increase, leading to a grinding noise and distortion of whatever you want to hear. There is a sweet spot where it’s not too loud to distort anything nor too low to be inaudible but this makes it, like the Mutrics, unusable in loud environments like in the metro or train.

On the other hand, I’d highly recommend it for your workouts, hikes or even if you bike on your commute as the open-ear design allows you to listen to your music playlist or favorite podcast without obstructing your ears and being aware of your surroundings. The audio quality isn’t the best nor the worst you’ll have experienced but it’s good enough to get the job done and the Bluetooth 5.0 offers stable connection. Of course, like your good ol’ wireless earphones, the Lucyd Loud is also able to pick up/reject/end phone calls and summon most voice-activated apps like Siri/Google Assistant. The latter open the Lucyd Loud to a whole spectrum of possibilities like sending texts, asking for directions, calling a ride, make hands-free payments or even open a specific app thanks to voice recognition. I mostly fire up my Google Assistant, with a double click on the right arm, to check the weather, play the news and read out my schedule and then launch some tunes from Spotify. For these practical uses, the Lucyd Loud fares just fine.

Moreover, if you have an Android-based smartwatch like the Kospet Prime or Zeblaze Thor 5 Pro, the Lucyd is a definitive add-on to enhance your phone-on-a-wrist experience. 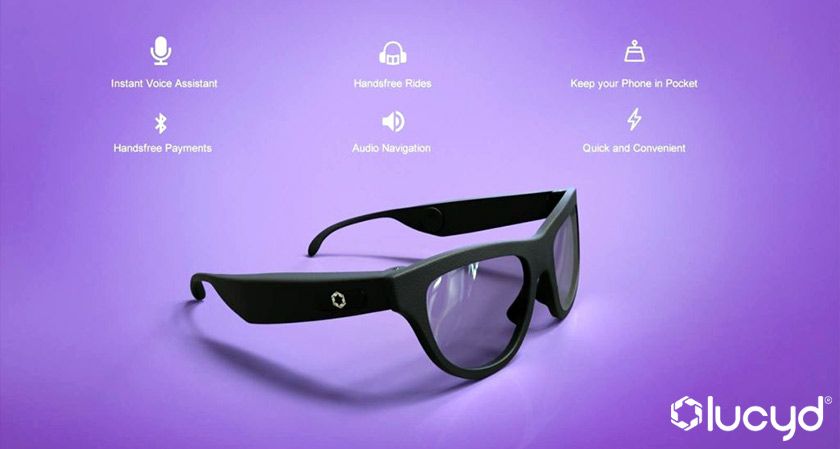 One of the major complaints I have with the Lucyd are the controls. There is a ‘+’ and ‘-’ button on each arm which should in theory make things easier but in practice it makes everything all the more confusing. Right arm is to increase/decrease the volume with a single press while long pressing the ‘-’ will fire up the virtual assistant. The same button will also answer calls with a single click or reject calls with double clicks. Holding on ‘-’ will hang up a call. The left arm is to skip tracks with single presses or play/pause with holding of the ‘-’ key. I’m jotting this all down here for you to have an idea about how confusing it all is and also as another way for me to look up what does what without having to go back to the instruction booklet, because I’m not getting used to this control scheme.

The Mutrics on the other hand has only 3 buttons on the right arm and felt much more intuitive to use. Moreover, the previous Lucyd Loud models seemed to feature a touch panel instead of physical buttons where swipes would correspond to actions and I’m wondering if the 2020 model’s control scheme isn’t a downgrade from the previous one. 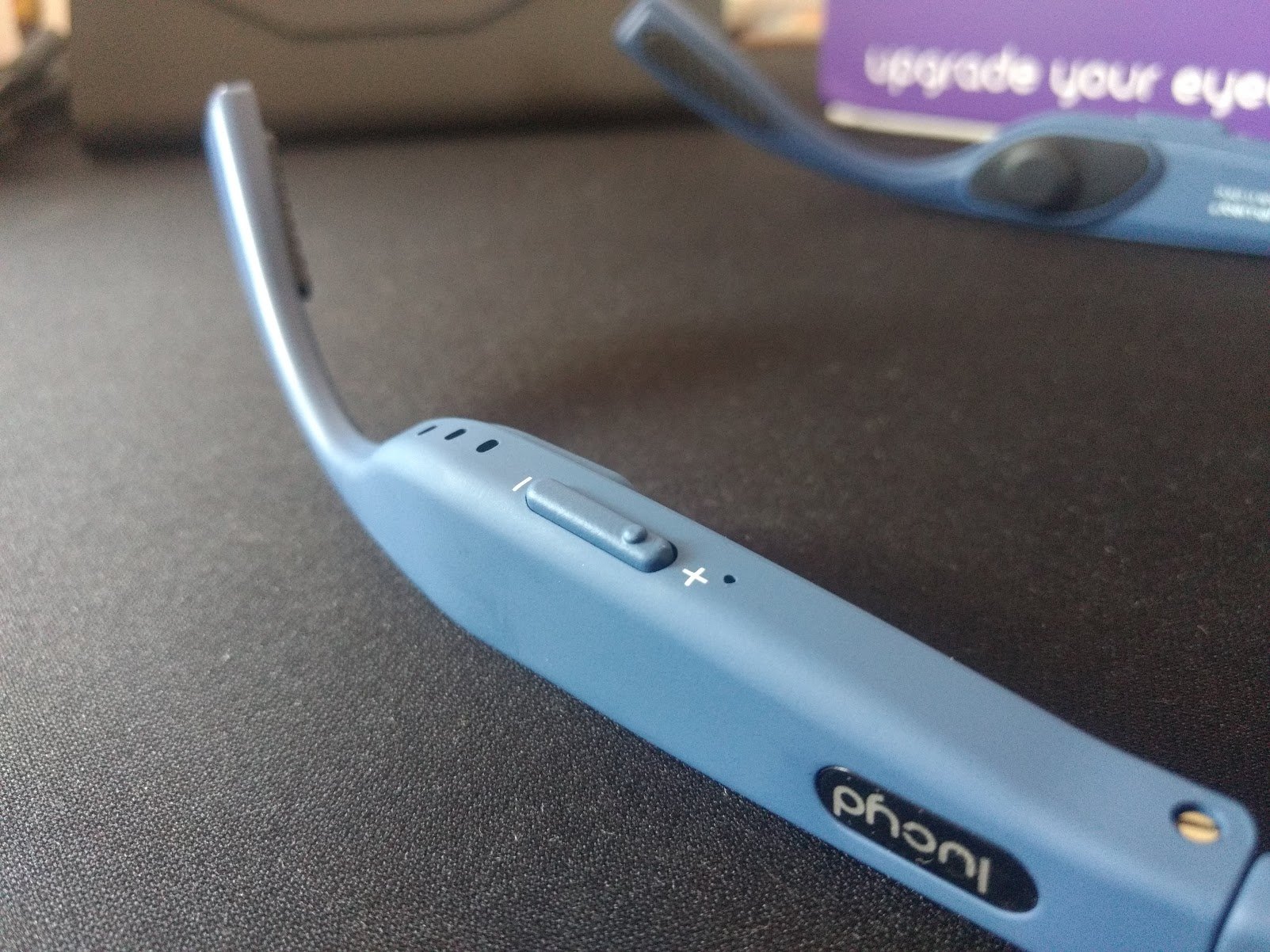 Another complaint I have is the inability to check the frame’s battery life. A companion app would have done the trick and could also allow users to remap the buttons and make controls less confusing.

There’s also the issue of its proprietary charger which just adds another wire to your already super tangled tech life. It’ll also be more difficult to find a replacement should you misplace the one included in the package. 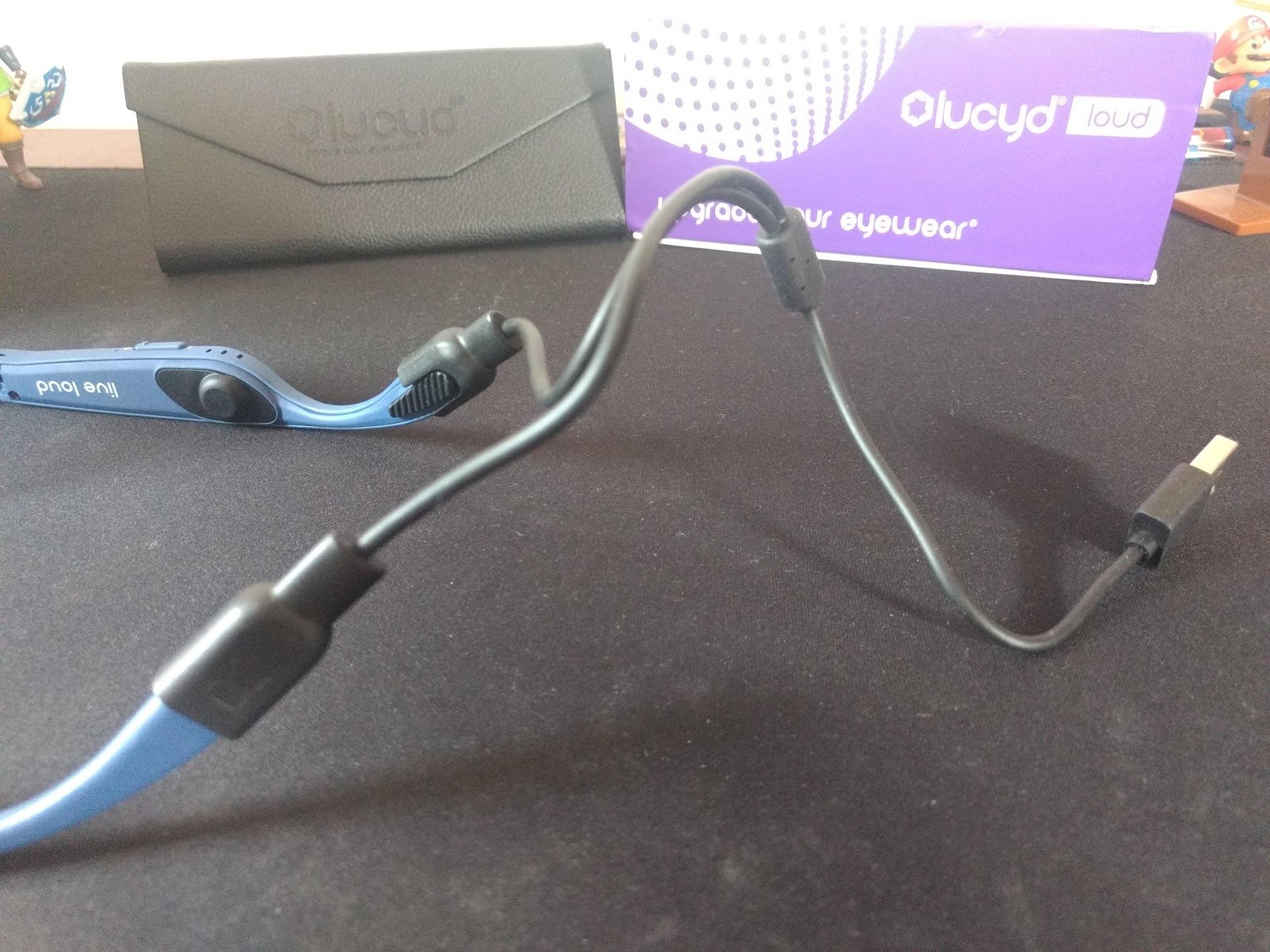 Nevertheless, my experience with the Lucyd Loud has been a pleasant one, allowing me to have a hands-free audio experience without barring the outside world. Its style makes it as inconspicuous as my regular frames and should a conversation or meeting bore me, I can just fire up my Spotify playlist and listen without (hopefully) appearing rude.

It’s also more than adequate for casual bouts of gaming on my phone. For games like Telltale’s The Walking Dead or even emulators, the Lucyd Loud provides a nice audio experience. More than connecting it to my phone, I’ve also used it to connect to my Switch via the GuliKit Route+ Pro for a wire-free on-the-go gaming experience. Yes, it’s well adapted for gaming. Just don’t plan to use it for competitive gaming sessions or expect quality matching around-the-ear headsets.

There's still room for improvement in Lucyd's take on the "enhanced frame" concept but it's a promising start and I'm eager to see what they come up with next! Hopefully the team will address the issues pointed out in this review for an even more enhanced experience.

I've been in touch with the CEO of the company who pointed out that the battery life of the glasses is shown on the top right corner of the connected device’s display. However, these are for iOS devices while this review tested the frames on Android devices. 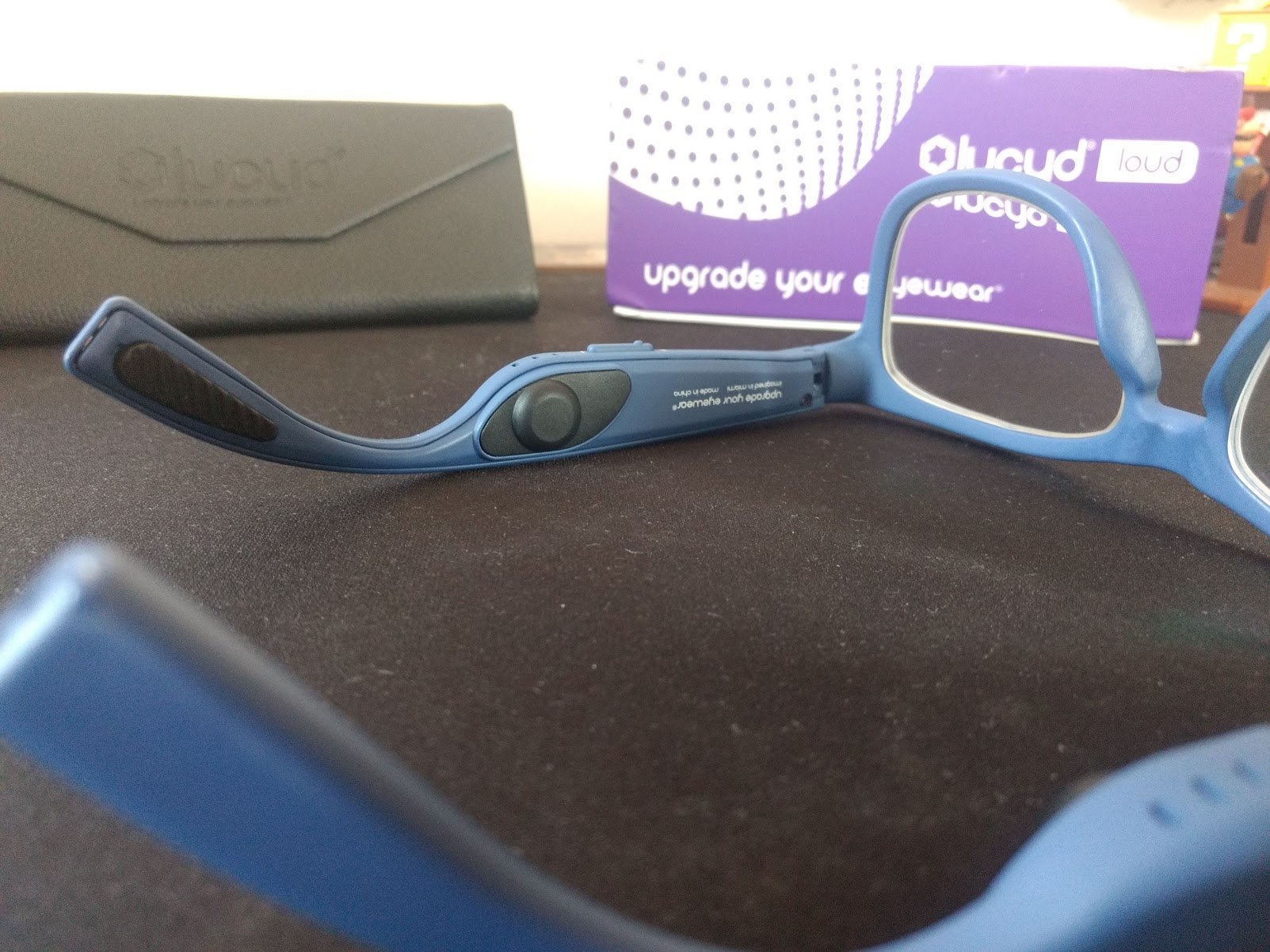 While definitely a cool-to-have tech that fits seamlessly in your daily life, especially if you’re bespectacled, the Lucyd Loud could still be improved upon to enhance the user experience and make it a more compelling device.
Reactions: Mr. Looigi, KingVamp, lordrand11 and 3 others
Share:
Facebook Twitter Reddit Pinterest Tumblr WhatsApp Email Share Link
I don't have glasses and don't have a phone (also ew bluetooth) but I am somewhat surprised to see bone conduction work this well for a reasonable price.
Reactions: DarknessPlay3r and Prans
This looks really neat. Something I'd like to try when going out for a walk
Reactions: Prans
Bone headphones give me headaches. Not sure if that is commonplace.
Please tell me Users can take the Arms and place them onto other Frames for Glasses/Sunglasses.........preferably my Wiley X Sunglasses or my Prescription Glasses.
I'd love to use something like this for when I walk to the library, as I normally wear prescription glasses. Not needing to bring headphones, then take them off and just kinda awkwardly put them around my neck for my hair to get caught in, or just hold them while I'm actually at the library is cumbersome.. However not being able to use it in loud situations is the issue. Walking down a busy boulevard would probably make these completely inaudible, not to mention I normally wear metal frames and it'd be an adjustment for a lot of people (Particularly my boyfriend)..
Hmm not sure about it ... the idea is nice (design isn't)
If you would use this as your main glasses you would always have to carry the extra weight from the electronics and battery plus you could always have these earplugs near your ears ... no Idea if it is comfy at all.

Having bluetooth around your head all day long might not be the best either even though I for one haven't noticed any problems yet (I know people who actually "feel" bluetooth and ask everyone to turn it of around them)
I really wanna try bone conduction headphones like this...but I don't wear glasses, so I feel like they'd just be more awkward to adjust to, than just hearing normal ol earbuds.

Smoker1 said:
Please tell me Users can take the Arms and place them onto other Frames for Glasses/Sunglasses.........preferably my Wiley X Sunglasses or my Prescription Glasses.
Click to expand...

I think it might be the case as there are screws on each arm and each arm is charged separately, meaning they each carry their own battery and internals. Haven't tried dismounting them on though and not sure if the arms will fit in other frames, but worth a try!
Reactions: Smoker1
"In the future, you won’t even see earphones because they’ll be integral components of your glass frames."
Except for that noise-cancelling is a thing, but absolutely a cool concept though!
There's no option for UV400. Tsk tsk.
Seems like a knock off of those Bose shades
fat much? maybe a little diet is good for looks...

@ Julie_Pilgrim: like bro do something different, get some men Today at 8:00 AM
Chat 0